Yahoo Life has partnered with Emmy- and Peabody Award-winning broadcaster Soledad O’Brien for the exclusive premiere of the documentary Hungry to Learn. O’Brien and her team followed the lives of four college students facing the hard choice of paying for college or paying for food and housing. She discovered that […]

Yahoo Life has partnered with Emmy- and Peabody Award-winning broadcaster Soledad O’Brien for the exclusive premiere of the documentary Hungry to Learn. O’Brien and her team followed the lives of four college students facing the hard choice of paying for college or paying for food and housing. She discovered that an astounding 45 percent of college students are struggling with hunger. This is part two of our partnership, exploring how colleges, universities and nonprofit organizations are helping students who are struggling with hunger during the coronavirus pandemic. Watch O’Brien’s “Hungry to Learn” documentary here.

College and university students are struggling with hunger across the U.S., and the coronavirus pandemic is making it worse. As a result, some schools and nonprofit organizations have ramped up operations to support vulnerable students.

Marissa Nachman, vice president of programs at Swipe Out Hunger, a national nonprofit organization dedicated to ending college student hunger and that reaches over 20,000 students nationwide, says the virus crisis has only aggravated the problem.

“With the pandemic, obviously so many people — students and their families — have lost income. A lot of students who used to be living on campus aren’t able to live on campus right now, or might not have another stable place to live,” Nachman tells Yahoo Life. “And so, food insecurity has definitely been exacerbated.”

In April the organization surveyed 167 students from three universities (Cal Poly San Luis Obispo; the University of Tennessee, Knoxville; and the University of Minnesota), asking them to specify challenges they’ve encountered during the pandemic. Thirty-three percent of students reported loss of income after being laid off, and 20 percent reported food insecurity.

In March, Congress passed the CARES Act, providing $2 trillion in financial aid for those in need during the pandemic, including $6 billion earmarked specifically to assist students in need.

“While it did help countless students, there were populations of students left out — namely, international students and undocumented students were not included in the language by the Department of Education … which we were very disappointed by,” says Nachman.

“Day to day, we have between 700 to 900 students visiting our [campus] food pantry,” says Darice Ingram, the program coordinator for Pioneers for H.O.P.E. at Cal State East Bay, which provides emergency assistance, emergency housing and food for students dealing with a basic-needs crisis.

She says the need is real, as 80 percent of the student population at Cal State East Bay is living at or below the federal poverty level. Since the pandemic began, she says, the food pantry services moved online and her organization has worked to connect students to resources near their homes. Ingram says Cal State East Bay was one of the first universities in the California State University system to distribute their CARES Act dollars.

Sandra Vasquez, a senior at Los Angeles Trade-Technical College, says she has struggled with food insecurity throughout her education. She has received her certificate in culinary arts and is three classes away from getting her degree.

About a year ago, she became eligible for SNAP benefits, or food stamps. “Once I started getting it, that’s when I started noticing that my food insecurity was changing a little bit and I was able to maintain,” she says.

Vasquez says it has been a struggle to get to this place, having lived in foster homes until she aged out at 18. “I struggled. I pushed my way through,” she says. “Out of eight siblings I’m the only one that is going to graduate college this year.”

Vasquez says she makes around $1,200 a month, which goes to rent and utilities. She describes living with a roommate in the past who didn’t pay her part of the utilities, which resulted in the power being shut off, and recalls having to study by flashlight. “To me, it’s just sad, because I wasn’t able to pay extra so that we can keep the utilities on, but, you know, I managed to do my part,” she says.

A symptom of poverty

“When I talk to someone new, this is something that’s shocking to them, but when you really look at how the system of higher education has changed over the past four decades, it becomes really obvious and apparent why this is an issue,” says Rebecca Leighton, health promotion specialist at Boynton Health at the University of Minnesota Twin Cities. Her main focus is on college student food insecurity.

She says in the 1970s and ’80s, states covered about two-thirds of tuition for a student. Today, that cost is reversed, with students paying for at least two-thirds.

“In the state of Minnesota, tuition has increased at twice the rate of the Minnesota per capita income. So the increase in the tuition is much higher today than it was a couple of decades ago, and income hasn’t matched,” she says.

Leighton also points to a greater diversity of students attending college now. “College or higher education used to be a resource for families with money and families whose parents had already gone to college,” she says. “And now, over the last few decades, it has opened up and there’s a lot more first-generation students, students of color, students from low-income families. So students come into the institution of higher education with a lot less resources than students in the past.”

On campus during the pandemic, students of color were hit the hardest. According to a University of Minnesota survey that polled about 2,000 students in April, food insecurity was reported by 58 percent of American Indian/Alaskan natives, 40 percent of Black students, 39 percent of Asian students, 28.1 percent of Hispanic/Latinx (any race) students and only 14 percent of white students.

“Access to food is one thing, but it’s really a symptom of unmet need — usually a symptom of poverty,” says Leighton. “So a student or an individual in the community is struggling to pay for enough food during normal times, [but] when the crisis hits like COVID-19, that kind of pushes them over the edge, financially. Then food is one of the first of the basic needs to go, because you’re going to try to prioritize your rent or your medication over food.”

Although a majority of the University of Minnesota’s classes are online this fall, its food pantry, Nutrition U, plans to reopen on Sept. 23 and will double the number of days it is open each month. Leighton says it’s hard to anticipate the number of students who will use the food pantry this fall, but she thinks “there will be a greater need, especially among students who are already on the edge.”

She says a survey of food pantry participants confirmed that during the spring and summer, students suffered job losses and loss of internships and, as a result, lost eligibility for SNAP benefits because they weren’t working enough hours.

Living on Ritz crackers and tuna

That’s what happened to Hayden Pegues, who is a senior at Southern Illinois University, majoring in aviation management. He says at the beginning of the pandemic, his food insecurity was exacerbated, as he left his construction job and was no longer eligible for SNAP food stamps.

“I thought I could get a job after that, but like, I cannot. I’ve applied at tons of different places and still have not been able to get a job,” says Pegues.

He says the food pantry on his college campus was closed during the pandemic, “and so I would just make Ritz crackers and tuna stretch out as long as I could.” But he then discovered a nearby off-campus food pantry, which he says is a great improvement over his campus food pantry, where offerings were “very limited. Like, you get cans of corn … and like, peanut butter and stuff like that. You can’t make a meal with [it],” he says.

Pegues estimates that by the time he graduates from college in the spring, he’ll owe around $45,000 in student loans.

“It is very difficult to ask for help, especially when you’ve been raised, being taught, like, fend for yourself,” he says. “It’s almost impossible to juggle full-time school and enough work to make it so that you can eat whatever you want or how much you want.”

He says this fall, classes are online due to the pandemic, and there is little to no access to campus amenities such as the student center. He says the dental center is open but not accepting student insurance.

“I would love to see tuition dropped if they’re not going to up their standards of learning and just do online stuff because you know, anyone could go to a community college and get that same exact education for cheaper,” he says.

Leighton recommends looking into food pantries at colleges and universities in your area as places to donate food or money.

She also recommends asking local universities if they have a scholarship fund or emergency aid fund where donations can be made. “A lot of times students might just have an emergency crisis, like a car breakdown, and they need that repair and they don’t have $500 for that. And if they could get an emergency grant for that, it might keep them in school and prevent them from having to drop out without a degree but with all the debt partway through the education.”

If you are a student in need of assistance, Swipe Out Hunger has partnered with Rise, a nonprofit organization that builds student-led campaigns to make college accessible to all. They’ve created a Student Navigator Program to connect students to financial benefits available through the CARES Act. Through the program’s online referral service, students can connect with resources and benefits and can apply to learn more about what might be available to them.

For additional information on resources for students during the coronavirus pandemic, visit the Hope Center for College, Community, and Justice.

Want lifestyle and wellness news delivered to your inbox? Sign up here for Yahoo Life’s newsletter

How to Finance Home Schooling Your Children

Tue Sep 15 , 2020
Ryan Ermey: If the pandemic has you weighing the costs and benefits of homeschooling your children you’re not alone. It’s a complicated and personal decision though. And Kiplinger.com online editor Andrea Browne Taylor is here to help you weigh the pros and cons in our main segment. Ryan Ermey: On […] 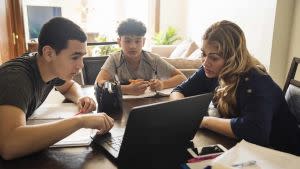