2020 was a horrifying year to be a small business owner. Yet, for some of the biggest companies in the US, the pandemic has been a financial boon, as companies like Amazon and Walmart bring in billions.

It is too late to save the thousands of businesses lost during the pandemic. But, we need to act now if we want to prevent a vicious cycle that requires sacrificing a dwindling number of small businesses from continuing far beyond 2020.

Read more: McDonald’s investor explains why he and others are calling for the resignation of the fast-food giant’s chairman

Small businesses are feeling the pain

The pandemic has been an apocalyptic event for small businesses. The number of small businesses in the US has dropped by 29% since January and revenue has plunged by 31.9% over the same period.

But, theses closures are not an inevitable side effect of the pandemic. Instead, it is an acceleration of what has been happening for decades – big businesses consuming more of the pie, while small businesses fight over an ever-shrinking mound of scraps.

In 2000, 15% to 20% of small companies became medium or large companies every year, business professors Vijay Govindarajan and Anup Srivastava reported in Harvard Business Review. By 2017, that figure had been slashed by half.

“Going into the pandemic, I have never seen the playing field more tilted” to the advantage of a handful of big businesses, Moody’s analyst Charlie O’Shea told Business Insider.

“If you don’t have the bucks, you can’t make the investments and you can’t compete on a level playing field,” O’Shea said.

Prior to the pandemic, roughly half of small businesses only had enough cash to stay in business for 27 days if they stopped bringing in money, according to a JPMorgan Chase Institute analysis. A quarter had a cash buffer that would last them fewer than 13 days.

The pandemic put these cash buffers to the test. And more than 163,700 businesses failed that test, according to a September Yelp report, shutting down amidst financial hardship.

Big business got bigger in the pandemic

Meanwhile, half of small business owners say that they will be forced to close if current business conditions continue for more than a year, according to a MetLife & US Chamber of Commerce Small Business Index survey released in mid-December.

“People were in total shock” when the pandemic began, said Luz Urrutia, CEO of the small-business lender Opportunity Fund. “Small business owners were at home [asking] what do we do now? What happens? This is our lives, this is our livelihoods. This is our family.”

The situation is even more dire for entrepreneurs of color.

“Investors believe that the large companies are at least as better off as at the start of this year,” Govindarajan and Srivastava said in an email. “The same cannot be said about the small and medium enterprises. Many are not sure whether and when they would be able to resume their business, if at all.”

Why Big Business is thriving

Experts say that there are three major reasons why big businesses are breaking financial records while small businesses flounder during the pandemic: financial positioning, lobbying power, and tech investments.

Curbside pickup and mobile apps have been boons for fast-food chains like McDonald’s. The ability to quickly and reliably ship online orders is increasingly crucial, boosting sales at companies like Amazon and Walmart that have invested in tech and logistics. This advantage was especially important this holiday season, when e-commerce made up 19.7% of overall shopping, compared to roughly 13.4% in 2019, according to Mastercard SpendingPulse.

In some ways, big businesses have been able to thrive simply because they can give customers whatever they want to buy, cheaper and quicker than the competition.

But, blaming customers’ choices for small businesses’ demise ignores two of major factors – their cozy relationships with the government and financial institutions.

“A lot of people in Congress say they are pro-business, but what they really mean is pro-big business,” Bharat Ramamurti, the managing director of the corporate power research program at think tank Roosevelt Institute, told Vox.

Saying Americans simply prefer Walmart or Amazon also erases that for many customers, where they shop isn’t a choice as much as it is a necessity.

“I think many consumers would like to support their local establishments, where they have relationships, where they have a history, but that only goes so far as your wallet [or] your pocketbook will carry you,” former Sears executive and Columbia Business School professor Mark Cohen said.

America is stuck in a vicious cycle

Americans have seen what the big business boom looks like – and it’s not good. While individuals might get better benefits working at a bigger company or lower prices in chains’ stores, the tilted playing field between big and small businesses has concrete, negative effects on the nation.

Entrepreneurship, along with homeownership, is one of the most prominent ways for Americans to build wealth, according to Urrutia. But, small businesses are making up less and less of the economy. It is increasingly challenging for these companies to compete. As small businesses vanish, it leaves many people of color – already with less generational wealth than white families – with one fewer option to build wealth.

The trend favoring big businesses coincides with a widening gap between the rich and poor in the US.

Income has stagnated for most workers in recent decades when adjusted for inflation, despite net productivity growing by 70% since the early ’70s. Income inequality has increased steadily since the 1980s, according to US Census data. The 1% now controls about 37% of the wealth in the US, nearing Gilded Age highs.

Customers shop at companies like Amazon, Walmart, and McDonald’s that offer lower prices and convenience because it is what they can afford. Big business puts small business out of business with its superior deals. As a result, it becomes harder for the average entrepreneur to start and maintain a new mom-and-pop shop and build wealth.

It’s a vicious cycle that has continued for years. The pandemic only made an existing problem even worse.

The pandemic forced the broken system into the spotlight

Cohen and other experts argue that the system needs to right itself, or the American economy will simply cease to function.

The US will not recover economically, according to Cohen, until people are employed and have disposable income. That requires healthy small businesses. So, Cohen believes, political and corporate leadership will finally take the steps to make that happen.

“We’re in for a whole lot more pain and suffering than we’ve seen,” Cohen said. “But in the longer term, I really have an abiding belief in the power of the crowd to lift itself out of the muck. We have the opportunity to do that, by exercising a belief, wisdom, ambition.”

Experts offer an arsenal of options for how small businesses can be allowed to compete more fairly with the Amazons of the world and give Americans the financial flexibility to support small businesses.

Cohen emphasized the importance of new government policies, such as higher minimum wage and tax reform. Urrutia sees expanding small businesses’ access to capital, as well as services such as advertising and technology, as key.

“I talk about reversing, rebuilding and regenerating,” Urrutia continued. “We don’t want them to recover to where they were before.”

Can you expect a 3rd stimulus check, under Joe Biden?

Sun Jan 3 , 2021
TipRanks Gilead Sciences or Biogen: Which Biotech Stock is a Better Pick for 2021? An unprecedented pandemic did not stop the US stock market from finishing 2020 on a high note. The S&P 500 ended a highly volatile year at an all time high and overall, was up 16.3%. Meanwhile, […] 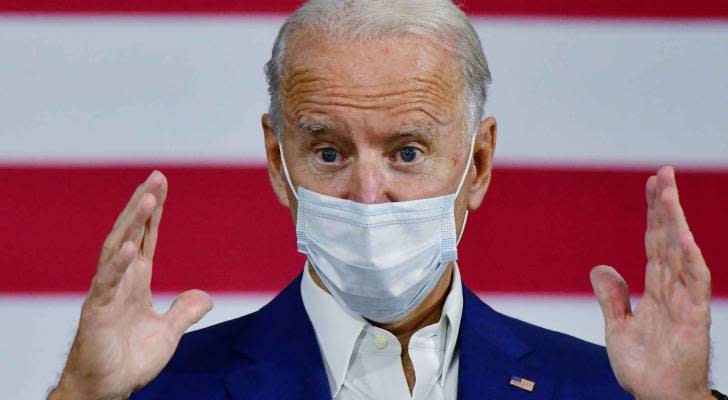