BOSTON — The sign is easy to miss in the waiting room of the emergency department at Massachusetts General Hospital, next to the reception desk and a hand sanitizer pump. “Register to vote here,” it says, above an iPad attached to a podium.

The kiosk has stood there since November, before the pandemic began, and stayed there through the worst weeks of April, when 12 gasping patients were put on ventilators during a single grueling 12-hour shift.

Now, as the number of coronavirus patients has slowed to a trickle, Dr. Alister Martin, the 31-year-old emergency room doctor who built the kiosk, is determined to keep trying to register voters.

“There will be a time where, above the din of suffering, we ask, ‘How can we use this to make something better of our situation?’” vowed Martin, who always sports a “Ready to Vote?” badge around his neck.

Martin’s project, VotER, has taken on new urgency as the pandemic has curbed traditional in-person voter registration efforts and as the link between public policy failures and death has become especially clear.

Now, despite a global pandemic — or perhaps because of it — his project is spreading across the country. Since May, more than 3,000 health care providers have requested kits to register their own patients to vote, including at flagship hospitals across the country in Pennsylvania, Kansas and Arizona.

VotER is part of a larger movement that pushes medical professionals to address the underlying social conditions — such as hunger, drug addiction and homelessness — that make their patients sick in the first place. At its core, it amounts to nothing less than an effort to change the culture of medicine by getting doctors and nurses to view the “civic health” of their patients as part of their professional duties.

Supporters of this movement said the health care system tends to work best for communities that vote, so encouraging voting is a strategy for improving patient health in the long term. Jonathan Kusner, a fourth-year medical student who is co-chair of Med Out the Vote, a get-out-the-vote initiative started by the American Medical Student Association, said his group was encouraging primary care doctors to include “Are you registered to vote?” on intake screening questionnaires, similar to questions about domestic violence.

“Just as we ask people to behaviorally modify their diet or their exercise or their health, we could ask people to modify their civics,” said Kusner, whose organization has teamed up with VotER to promote voter registration in hospitals around the country.

But some health care professionals frown on voter registration efforts, fearing that they could be viewed as partisan. After years of being dependably Republican, doctors are now more likely to be Democrats.

Others worry that registering voters is beyond the scope of what medical professionals should be asking their patients. Few doctors have been trained to discuss voter registration in a nonpartisan way, and many emergency room doctors already feel overwhelmed by their work as it is.

But newly minted doctors tend to be more outspoken about the need to get involved in enfranchising patients and trying to fix a broken health care system.

“Previously, physicians taking a political stance was seen as possibly unprofessional,” said Kelly Wong, a medical student who is the founder of Patient Voting, a Rhode Island-based effort to provide hospitalized patients with information that can help them navigate the gauntlet of voting from a hospital bed. “Civic engagement of our patients and our communities is really important to changing health outcomes.”

Martin, who grew up in New Jersey with a single mother, said he identified with his emergency room patients who struggle to make ends meet. At Harvard Medical School, he became disillusioned realizing how much time doctors spent on paperwork and the power of insurance companies to dictate what treatments are prescribed.

He considered leaving medicine for good and earned a master’s degree in public policy. Then he worked as a health policy aide to the governor of Vermont during that state’s experiment with single-payer health care.

Eventually, he returned to medicine, finishing his residency last year. He is already full of stories about public policy failures that make patients sick. He speaks with passion about the 19-year-old woman who came in twice in one week with a life-threatening condition related to diabetes.

In medical school they called it “noncompliance.” She was not taking her insulin as instructed. But Martin realized after talking with her that she had been rationing insulin because she had lost her health insurance.

Then there was the woman who came in on Christmas Eve with stomach pains. Her urine sample revealed high levels of ketones, a sign that she had not eaten in days. That, too, was not the kind of problem he had been taught to solve in medical school.

“Gunshot wound? Save them. Heart attack? Diagnose it. Stroke? Fix it,” he said of his training. “Really, the thing that keeps you up at night is, ‘This woman was here for abdominal pains because she was starving.’ I don’t have an answer for that.”

The Birth of an Experiment

Last year, just a few months after Martin was hired as a full-fledged emergency room doctor and a faculty member at the Harvard Medical School’s Center for Social Justice and Health Equity, he asked hospital administrators for permission to put up voting kiosks. They agreed, as long as the effort was nonpartisan and did not infringe on treatment.

Martin installed TurboVote software on a few iPads and affixed them to podiums that he bought online. He also put up posters with QR codes that patients can scan with cellphones, automatically bringing up a website where they can register to vote.

The project was just getting started — with about one patient a day registering to vote and about a dozen hospitals expressing an interest in the kiosks — when the pandemic struck. Emergency rooms filled with terrified people demanding tests. The iPad touch screens became a source of possible infections. Hospitals that had ordered kiosks stopped returning his calls.

Massachusetts General Hospital took on the look of a military camp, with a tent for the homeless who awaited their results. In April, at the peak of surge, Martin noticed that most of the sickest people were low-income Spanish speakers — essential workers who could not shelter in place.

The virus was laying bare the disparities in the health care system that Martin was already trying to combat.

Instead of sidetracking VotER, the pandemic has only raised interest in the project. After months of watching the mismanagement of the response and fearing for their own lives as well as their patients’, many doctors and nurses now see the connection between their work and politics more clearly.

“There are more nurses interested, more doctors interested,” said Aliza Narva, director of ethics at the Hospital of the University of Pennsylvania, of her hospital system’s efforts to register patients to vote. “I would guess that people really saw the implication that policy can have on the actual care that we are able to deliver.”

She said some are pushing to include voter registration information on hospital discharge documents.

The kits have already arrived in Lawrence, Kansas, where Dr. Sherri Vaughn has arranged for the QR code posters to hang in the emergency room, radiology waiting rooms and the cafeteria at Lawrence Memorial Hospital as well as at primary care offices in town. Vaughn also serves on the board of the Kansas Hospital Association, which embraced the effort as the logical extension of its earlier efforts to register doctors and nurses to vote.

“It has gone out to every hospital in Kansas,” she said.

So far this month about 500 people have registered to vote using the QR code on VotER posters and badges worn by health care providers, about twice as many as had registered during the previous three months. And Martin has received so many orders that he isn’t sure how his small team of volunteers will fill them all.

The pandemic has put an edge in his normally cheerful demeanor that was not there before. If health care providers want a system that works, he said, they have to “step up.”

“The time for us being impartial and apolitical and standing on the sideline is over,” he said.

The virus has also given Martin another avenue to bring up the topic of voting with his patients. He advises his patients, especially the most fragile, that it is safest to vote from home in November. “Do you already have your mail-in ballot?” he asks them, pointing to the QR code on his badge. “You can get one here.”

Sun Jul 26 , 2020
The number of businesses going under in South Florida is growing at an alarming rate, cutting the chances for laid-off workers to find other jobs during the COVID-19 pandemic. According to Yelp, the national online business listing firm, nearly 3,000 businesses closed in the tri-county area between March 15 and […] 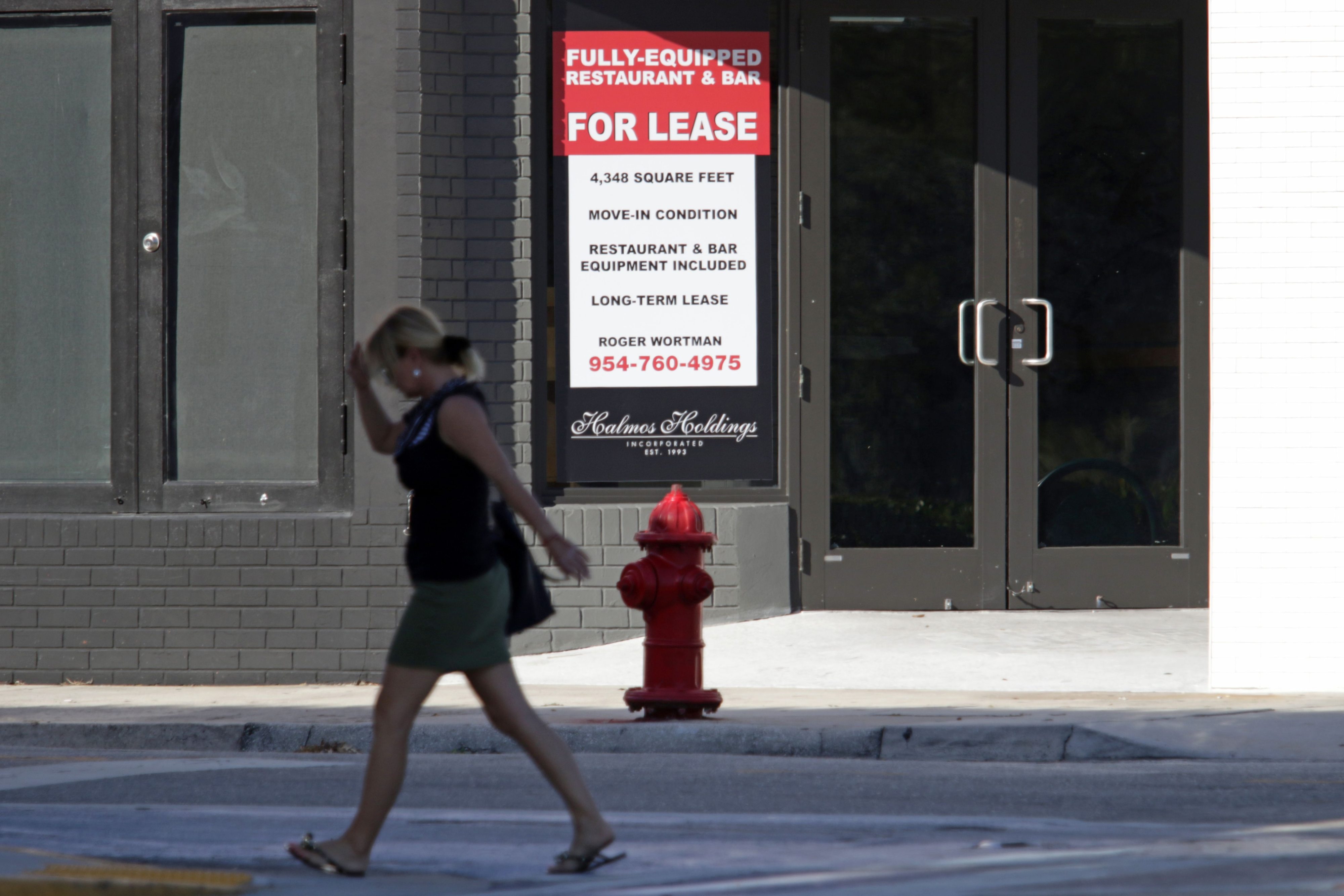