By John Patrick Lee, CFA, Product Manager, VanEck Who could have predicted that a free game would make more money than any other video game in a single year? That’s exactly what Fortnite did in 2018, when it brought in about $2.4B. It is a prominent example of how in-game spending […]

Who could have predicted that a free game would make more money than any other video game in a single year? That’s exactly what Fortnite did in 2018, when it brought in about $2.4B. It is a prominent example of how in-game spending has revolutionized the video game ecosystem.

In the traditional business model, known as “game as a product”, a game publisher develops a game and then sells it to the consumer for a single, revenue-generating fee. After the consumer buys the game, the video game publisher has to develop another video game or add-on to generate additional revenues from that consumer.

In the mid-2000s, video game publishers began testing the “game as a service” model. In this model, the consumer may bypass the initial cost of purchasing the game, and then pay ongoing fees to continue playing the game and accessing content. There are a number of different ways the game publisher can generate revenues under this model, including game subscriptions, microtransactions and season passes. While transactions in the service model may entail smaller amounts, the publisher opens the door to an indefinite purchasing lifespan from each consumer, which can increase the total revenues generated from a single game.

This business model serves three key purposes from the publisher’s perspective. It extends the lifecycle of games being played by consumers, increases the maximum revenue potential from a single consumer and lowers the hurdle for new potential paying customers to try the game before deciding to spend. Publishers are embracing this new model as a way to drive revenue growth. However, different publishers are tailoring their in-game spending strategy depending on their specific product lineup. Activision Blizzard and Take-Two Interactive have each adopted very different approaches to implementing this business model. 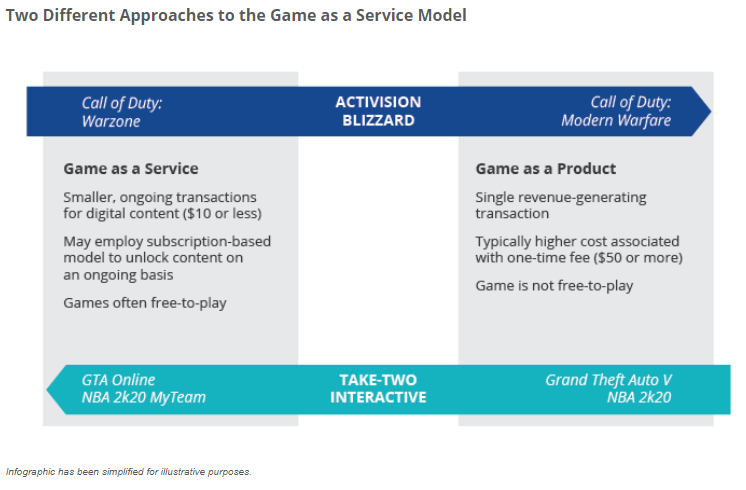 Activision Blizzard: From Free to Premium

Blizzard Entertainment (now a division of Activision Blizzard) was one of the pioneers of this new revenue model. It released World of Warcraft in 2004, an MMORPG that allowed players the option to buy a monthly, ongoing subscription to access the full, unlocked game. Currently, Activision Blizzard is employing the in-game revenue model across a number of different games and platforms.

Call of Duty: Warzone is a free-to-play game that has been downloaded and played by at least 75 million people around the world since its release in Q1 2020.

Take-Two Interactive: From Product to Service

Video Gaming and Esports: Taking Media and Entertainment to the Next Level

Activision and Take-Two have essentially adopted reverse approaches to the game as a service model. Activision’s release of a free-to-play game is helping drive consumers to purchase a traditional game, while Take-Two requires an upfront game purchase before consumers are able to spending more on in-game items.

Recurrent in-game spending is among the trends that are driving the growth of the video gaming industry and making this space, in our view, a compelling investment opportunity. The whitepaper, Video Gaming and Esports: Taking Media and Entertainment to the Next Level, provides an in-depth look at what’s driving the long-term potential of this space, as well as how investors can incorporate it into their portfolio.

Please note that Van Eck Securities Corporation (an affiliated broker-dealer of Van Eck Associates Corporation) may offer investments products that invest in the asset class(es) or industries included in this blog.

This is not an offer to buy or sell, or a recommendation to buy or sell any of the securities/financial instruments mentioned herein. The information presented does not involve the rendering of personalized investment, financial, legal, or tax advice. Certain statements contained herein may constitute projections, forecasts and other forward looking statements, which do not reflect actual results, are valid as of the date of this communication and subject to change without notice. Information provided by third party sources are believed to be reliable and have not been independently verified for accuracy or completeness and cannot be guaranteed. The information herein represents the opinion of the author(s), but not necessarily those of VanEck.

All investing is subject to risk, including the possible loss of the money you invest. As with any investment strategy, there is no guarantee that investment objectives will be met and investors may lose money. Diversification does not ensure a profit or protect against a loss in a declining market. Past performance is no guarantee of future results.

How to protect yourself from these common Social Security scams

Sat Nov 7 , 2020
Social Security fraud now constitutes the top scam in the U.S. The Federal Trade Commission said it has received nearly 1.3 million reports of scammers posing as government agents since 2014, more than any other type of fraud reported in that time frame. In the first three months of 2019, nearly 65,000 incidents of […]