DULUTH, Ga. ― The situation, Republicans in this Atlanta suburb were warned, is dire. If Democrats Raphael Warnock and Jon Ossoff win Senate runoff elections and give their party control of the U.S. Senate, it would mean the “collapse of the United States of America,” Rep. Andy Biggs. (R-Ariz.) said. […]

DULUTH, Ga. ― The situation, Republicans in this Atlanta suburb were warned, is dire. If Democrats Raphael Warnock and Jon Ossoff win Senate runoff elections and give their party control of the U.S. Senate, it would mean the “collapse of the United States of America,” Rep. Andy Biggs. (R-Ariz.) said.

“We can’t let that happen,” said Biggs, a leader of the ultra-conservative House Freedom Caucus, claiming a Democratic Senate would threaten “the rights that we’ve loved for years ― the right to worship, when, where and how we want the right to associate, the right to travel the right to say what we want and to be critical of our government.”

At the same rally, part of the Club for Growth’s “Save America” tour, Montana GOP Sen. Steve Daines swore to the crowd of 100 gathered in a mall parking lot that it was not “hyperbole” to say Democrats were “coming for your guns.” Rep.-elect Marjorie Taylor Greene said Warnock, a pastor, was a “heretic” for supporting abortion rights. Ohio Rep. Jim Jordan bluntly declared: “They want to take away your freedom.”

But the GOP’s apocalyptic rhetoric surrounding Georgia’s Jan. 5 runoff elections distorts a reality Democrats are beginning to acknowledge. Victories by Ossoff and Warnock would allow the party to enact only the most incremental elements of the Democratic agenda, empowering not big-dreaming progressives, but cautious moderates.

During a rally with Warnock and Ossoff on Tuesday in Atlanta, President-elect Joe Biden attacked their Republican opponents, Sens. Kelly Loeffler and David Perdue, as mere placeholders uninterested in progress. (The Warnock and Ossoff campaigns released a television ad on Thursday morning featuring Biden pushing a similar message.)

Ossoff was even blunter, calling back to Senate Republican Leader Mitch McConnell’s obstructionism during the presidency of Barack Obama.

“If Mitch McConnell keeps control of the U.S. Senate, he will try to do exactly to Joe and Kamala like he did to President Obama,” Ossoff said.

Defund The Police? Not Quite.

Victories by both Democrats ― operatives in both parties think a split outcome is very unlikely ― would give Democrats precisely 50 seats in the Senate, allowing Vice President-elect Kamala Harris to break ties and making New York Sen. Chuck Schumer the majority leader. Republicans have suggested this would empower figures like progressive Rep. Alexandria Ocasio-Cortez (D-N.Y.), who has said a victory in Georgia would mean Democrats “don’t have to negotiate.”

Republicans spent much of the fall campaign falsely suggesting Democrats support Medicare-for-all, defunding the police and the Green New Deal. But these lines of attack have reached new levels of absurdity during the runoff campaigns.

A bare minimum Senate majority would actually place power in the hands of moderates like West Virginia Sen. Joe Manchin and Arizona Sens. Kyrsten Sinema and Mark Kelly. A full-on elimination of the Senate’s 60-vote requirement to pass most legislation, long a left-wing priority and a necessary step for Democrats to pass ambitious laws, would be off the table, with Manchin declaring the day after the November election he would vote against any attempt to eliminate the filibuster.

While Biden continues to harbor more hope than most Democrats about the possibility of working with McConnell and other Republicans, Democrats in Washington acknowledge his pre-election hopes for a “Rooseveltian” presidency dimmed when 2020 Democratic candidates failed to make significant Senate gains.

“While Republicans are proclaiming at the top of their lungs that the world is about to collapse if Democrats win these seats, the reality is that with this narrow margin, it will be difficult for Biden to move much of his agenda,” said Jim Manley, a Democratic strategist who worked for former Senate Majority Leader Harry Reid.

Both Ossoff and Warnock are walking a tricky line as they campaign, highlighting the high stakes as they seek to rally Democrats in a contest both parties agree will be a turnout-centric battle, while also acknowledging they’ll have to work with Republicans to accomplish much of anything.

Warnock showed the delicate dance at St. James Missionary Baptist Church in Columbus on Sunday morning. He said Trump’s failure to address the coronavirus pandemic was a potent reminder that voting is a matter of “life and death.” But when asked how he hoped to pass laws in a divided Senate, he talked of bipartisanship.

“As a pastor, I have a history of bringing people together,” Warnock told reporters after speaking at the church. “What I hope to do is lift up those values of our mutual commitment to one another, and compassion and justice, and that hopefully will be part of what breaks through the partisan gridlock.”

Ossoff, for his part, ticked off a number of liberal priorities: an updated version of the Civil Rights Act, a new infrastructure package with money for clean energy programs, a public option for health insurance.

“We can build a broad coalition to do those things,” Ossoff said after leading a march to an early voting site in Gwinnett County on Monday.

Ossoff has focused more narrowly on the topic of coronavirus relief ― his campaign has paid for billboards reading “COVID RELIEF NOW” on major highways in the state ― and specifically hammering Perdue for opposing the first round of $1,200 relief checks sent to Americans.

This approach has pleased progressives, who have pushed for Democrats to focus narrowly on economic relief, promising voters that support for Ossoff and Warnock would lead directly to more cash in their pockets.

“That’s in alignment with what we are hearing from voters and what they are telling us they want from senators,” said Nse Ufot, the executive director of the New Georgia Project, citing rising unemployment in the state and the possibility of mass evictions. “Our current crop of leaders has failed us, there’s no other way to put it.”

On Monday night, Perdue ended fly-around stops with a brief appearance ― he spoke for just three minutes ― at a private airport in Atlanta. But he was sure to get in the required warnings.

Trump Cites Georgia To Raise Cash For Slush Fund, But Has Spent Nothing On Those Races

Fri Dec 18 , 2020
A 37-year-old ice cream business is in a sticky situation. Grand Ole Creamery, a pillar in the local ice cream scene since 1984, has been struggling through the pandemic. Now, it is asking for help. General manager Chase Huffman has launched an online fundraiser, with the goal of $150,000, to […] 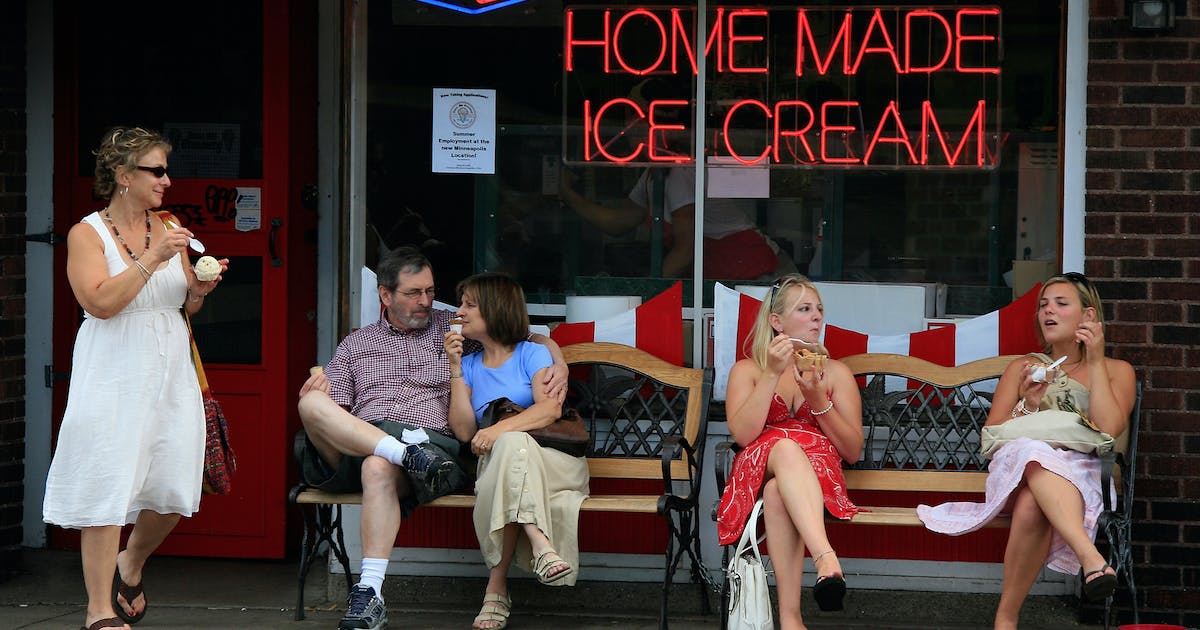