Photo Illustration by The Daily Beast/Getty Carlos had been out of work for nearly a month in April when his roommate in Los Angeles, a fellow garment worker from Mexico, contracted COVID-19. Carlos, who declined to provide his last name or the name of his employer for fear of retaliation, […]

Carlos had been out of work for nearly a month in April when his roommate in Los Angeles, a fellow garment worker from Mexico, contracted COVID-19.

Carlos, who declined to provide his last name or the name of his employer for fear of retaliation, had to argue his friend of 10 years—who claimed he had the flu—into the hospital. Then he sanitized the one-bedroom unit they share with a bakery laborer in the neighborhood of Pico-Union, and managed to avoid catching the novel coronavirus himself. While his roommate recovered, Carlos recalled struggling to find the money for food and for rent, and subsisting on assistance from the nonprofit Garment Workers Center, an organizing and advocacy group.

When the shop where he had worked the past two years reopened in early June, Carlos said he was reluctant to return at first for fear of the disease. Not only had the illness struck him at home, but it pervaded the lives of his friends, neighbors, and coworkers.

“Everyone knows someone who has gotten sick,” he told The Daily Beast.

He finally resolved to go back after a week, but began biking instead of taking public transit and avoided eating food he didn’t prepare himself.

The 50-year-old immigrant described his job as reasonably sanitary and socially distanced—a tiny operation that produces women’s blouses. But his roommate, who declined to be interviewed for this story, told Carlos he had been working in cramped and filthy conditions, without access to soap.

California Was a COVID Success. Here’s Why It’s Veering Back to Lockdown.

Community leaders say the crowded and precarious living situation Carlos and his roommate face is typical of the 45,000 people employed in Los Angeles’ garment industry. These workers helped brand LA the “the fast fashion capital of the U.S.,” as UCLA researchers called the city in a 2016 assessment of the sector. The localized and overwhelmingly immigrant workforce turn out pieces and full garments to fulfill factory contracts with L.A. designers and influencers, for online retailers, and for major store chains such as Charlotte Russe and Forever 21, the study found.

That same report, produced in conjunction with the Garment Worker Center, also surveyed workers on the environment at their workplace. Nearly three-quarters described settings “brimming with dust,” and 60 percent attested to high temperatures and poor ventilation. Almost half complained about a lack of cleanliness.

Then came a pandemic respiratory illness that thrives in close quarters.

Advocates argue conditions facing garment workers help explain why the Latino community has the highest age-adjusted COVID-19-related mortality rate of any ethnic group in L.A. Data posted by the county Department of Public Health shows that, when accounting for group differences in average stage-of-life, 58 Latinos out of every 100,000 infected with the virus lose their lives, 45 percent higher than the average across all demographic groups in the county. Official maps show cases concentrated in the southern and eastern reaches of the city and its embedded municipalities, where much of the immigrant population resides—garment workers among them.

With the onslaught of the COVID-19 pandemic, the city is now not just a fashion capital, but the center of a resurgent outbreak in California. Bemoaning what they say is a lack of robust public data on who gets COVID-19 and where, scientists have scrambled to explain the disparate effects and—along with activists—suspect housing and employment situations among low-wage workers like those in the garment industry are a primary culprit.

“They’re almost like petri dishes for any kind of illness,” said Angelica Salas, the daughter of a garment worker and director of the Coalition for Humane Immigrant Rights of Los Angeles, an advocacy group. “You’re dependent on each other, so in order to finish a piece, you actually have to work with a lot of people in very close quarters.”

“Indoor manufacturing settings, which are crowded and which have a large number of people in close proximity for a long period of time—that’s definitely a setting with a high risk of infection,” warned Dr. Jeffrey Klausner, a professor of epidemiology at UCLA, who was affiliated with the 2016 study.

The irony is that a number of firms in the industry have capitalized on their local supply chains during the pandemic and pivoted to manufacturing masks that can shield others from illness. The Los Angeles Times reported last month that a slew of companies citywide had transitioned to producing mouth and nose covers under the auspices of Mayor Eric Garcetti’s new L.A. Protects program.

One business that made the switch was L.A. Apparel, among the biggest manufacturers citywide. But on June 27, county officials shut down one of its main facilities on the south side of the city after more than 300 workers got sick, four died, and inspectors discovered “flagrant violations of mandatory public health infection control orders.” The Public Health Department further accused the firm of refusing to cooperate with an investigation into a reported rash of COVID-19 cases at the plant.

The location reopened last week after authorities found it to now be in compliance with health standards. CEO Dov Charney, famously defenestrated from American Apparel in 2014 amid allegations of sexual misconduct, has insisted that the county could not prove his factory was the origin point of the infections.

In an interview with The Daily Beast, Charney described himself as  “scapegoat” in a “propaganda campaign” intended to cover for officials’ own failure to conduct comprehensive testing in the Latino community. He maintained that, rather than failing to cooperate with authorities, he had preemptively instituted an array of precautions like masks, hand sanitizer, and social distancing and only tripped over a few minor instructions from the Department of Public Health.

He further asserted that his company’s internal testing prior to the closure showed a similar positive test rate as a nearby clinic found among patients coming in from the local community. Citing a report by one of his paid consultants, he maintained this made the county’s characterization of the infection pattern at his facility as an “outbreak” inaccurate, and suggested his workers could have contracted the illness in their homes or neighborhood.

“There’s no evidence there’s an ‘outbreak,’ and we’ll never know, and we’ll never, ever, ever know because they didn’t do the testing at the time we had the elevated number of cases,” Charney said. “They can play [like] they know better because they’re doctors and stuff, but anyone can see.”

The California Fashion Association—an industry trade group—did not immediately respond to a request for comment for this story.

Klausner, the UCLA epidemiologist, was less focused on individual businesses than the local government response. Specifically, he complained that the origins of any cluster will remain unclear so long as the county refuses to release case data disclosing the occupations and living arrangements of those who test positive for the virus.

“There’s a lot of unknowns, that the data could be made available and used in a way that would enable us to have a much better response,” he said. “Why is it that Latinos are so much more likely to be hospitalized?”

A spokesperson for the Mayor’s Office told The Daily Beast that city authorities do not directly regulate working conditions in the garment industry. A spokesperson for LA County did not respond to requests for comment.

What is clear is that underlying health problems cannot explain the high rate of COVID-19-related death and severe illness in LA’s Latino community. Models that researchers at the University of Southern California developed early in the pandemic projected that Latinos would actually be at the lowest risk of dying or suffering serious ramifications from the virus of any ethnic bloc in L.A., largely because the community skews younger than other demographics. This means that they should account for a proportionally smaller number of those sent to intensive care units—or worse.

But in raw numbers, without the aforementioned age adjustment, Latinos make up almost half of all COVID-19 fatalities in the county—exactly in line with their overall percentage of the population.

“When you look at the probability of death or hospitalization given illness, the rates are higher than would be expected given the risk factors alone,” said USC’s Dr. Abigail Horn, an infectious disease expert who along with her colleague Dr. David Conti has spent months charting the virus’s projected and actual impact. “But a month and a half ago you started to see this disproportionate trend in higher death rates in the Latino population.”

“Their employment is definitely a contributing factor in their exposure opportunities,” she added.

Veronica, another immigrant garment worker who spoke to The Daily Beast, reported that a friend of hers employed at L.A. Apparel had stopped going to work because of her concern with contracting the virus. Veronica herself waited three days before returning to her own job at a smaller shop when it reopened after the initial shutdown in March, even though her husband had personally been part of the crew that socially distanced the machines at the location following a county order.

Despite what she described as a relatively clean and accommodating environment at her job, the mother of five, who requested anonymity for fear of jeopardizing her employment, said she still fears catching the disease. People in her neighborhood in South Los Angeles, she said, scarcely leave the house except for necessities.

“Everyone feels afraid,” she said.

L.A. and California are almost unique nationally in providing COVID-19-related financial assistance to undocumented immigrants, who are not eligible for food stamps and unemployment insurance. But advocates argued that the funds, which combined come at most to a few thousand dollars, are insufficient to support families who might need to leave work in order to avoid illness or to self-isolate after infection.

Maria Brenes, executive director of the nonprofit Inner City Struggle based in Boyle Heights, recounted stories of people who had quarantined themselves in their car so as to avoid spreading the virus to their families.

“We need resources where people can quarantine safely, and still receive the services—health services, mental health services—and there needs to be an infrastructure to remain connected to their families,” she told The Daily Beast.

Also insufficient, according to Garment Worker Center executive director Marissa Nuncio, is the public monitoring of conditions in the city’s factories. Since the government’s capacity to conduct such enforcements is always limited, Nuncio is pushing a county-level proposal that would establish employee “public health councils” that would work in conjunction with nonprofits such as her own to report lapses in compliance.

“We really need strong, robust, frequent inspections of these businesses,” she said. “We think it’s going to be impossible for LA City and County Dept of Health to reach every workplace.”

Carlos, for his part, said his biggest fear was that the factory where he works will close again and leave him once more without income. Even so, he told The Daily Beast he would prefer seeing the entire sector shut down if officials thought it would prevent the further spread of COVID-19.

“If less people would get sick, I would support it,” he said.

Thu Jul 30 , 2020
Getty Viewers of the antitrust hearings between the US congess and the chief executives of the world’s biggest technology companies have been left confused and surprised by some strange moments. Social media users jumped on the fact that Amazon‘s Bezos received no questions for more than an hour in his […] 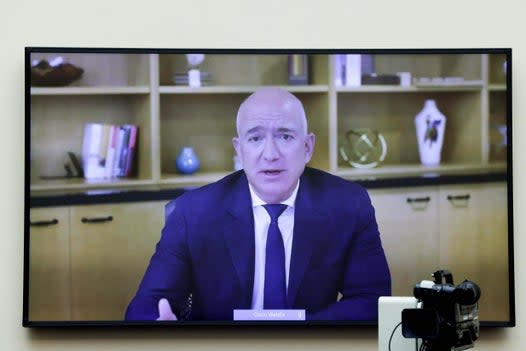