When Instagram headed into its fifth year of business, co-founder and then-chief executive officer Kevin Systrom was quoted at the time saying, “When we built it, we built it for photo-nerd hipsters in San Francisco, like myself and my co-founder [Mike Krieger], who listen to Modest Mouse and wear plaid.” […]

When Instagram headed into its fifth year of business, co-founder and then-chief executive officer Kevin Systrom was quoted at the time saying, “When we built it, we built it for photo-nerd hipsters in San Francisco, like myself and my co-founder [Mike Krieger], who listen to Modest Mouse and wear plaid.”

Instagram, which turns 10 on Tuesday, has emerged as a major social channel for the fashion and beauty worlds, and not just for sharing. Over the years, turning users into shoppers has become a major priority at the Facebook-owned company, and now it’s ready to bring shopping to IGTV and Reels.

The company unveiled the update to both video initiatives on Monday, though it’s arriving in different ways. Reels, Insta’s recently launched feature for short videos to compete with the phenomenon that is TikTok, will head into a testing phase at the end of the year. Few details are available so far — other than that shopping has been a popular feature request, it will include a small number of accounts and the company plans to test and learn as it goes.

“I remember I was telling a creator about the launch of Reels, and the very first question that she followed up with was, ‘When is shopping coming?’” Virginia Nam, fashion lead at Instagram, told WWD.

As for IGTV, its roll-out is an official global launch slated for Oct. 7. Businesses and creators who have access to Instagram’s shopping tools and, in the case of creators, have permission from brands to tag their products can sell on IGTV. The ability to tag products is available in more than 70 countries.

The standalone app, which features videos up to 60 seconds, seems like a natural fit for social commerce, as it attracts a steady diet of demos, styling tips and other types of product-oriented videos.

“We started seeing this appetite to shop through a longer-form video, especially when there are these gorgeous campaign videos that are being shared,” Nam added.

Like Live Shopping, the system uses a tagging system. And for sellers already familiar with Live Shopping, they can save a live video to IGTV, and the shopping tags remain, which could help ensure plenty of shoppable IGTV videos rather quickly.

According to the company, more than 130 million accounts tap to reveal product tags every month.

The goal is to allow people to make purchases easily, and transactions are handled either through Instagram Checkout or the seller’s web site.

“Digital creators and brands help bring emerging culture to Instagram, and people come to Instagram to get inspired by them,” said Justin Osofsky, Instagram’s chief operating officer. “By bringing shopping to IGTV and Reels, we’re making it easy to shop directly from videos. And in turn, helping sellers share their story, reach customers, and make a living.”

For the company, the launch of shopping on IGTV and the test for Reels are a matter of giving people what they want, wherever they are in the Instagram universe.

“Whether it’s Reels or feed Stories or IGTV or Live, they discover products and are inspired at every touchpoint,” explained Nam. “And so we want to make shopping easy, wherever our users are being inspired.”

Instagram has offered shopping for years, since its first tests in 2016. It’s made steady progress since then, developing its tagging system, allowing stores to connect their catalogs to the platform and, last year, launching Instagram Checkout. And, of course, parent company Facebook has had its Marketplace for peer-to-peer selling.

But this year both platforms seemed to get more serious about social commerce. It’s less of an experiment and more of a priority.

This past summer, Facebook unveiled Facebook Shop and Instagram Shop, along with a universal dashboard so merchants can better manage their stores. And Live Shopping in Instagram went from a beta to real product offering in August. Soon, Instagram plans to add a new shopping tab in the main navigation bar and will eventually make IGTV shopping discoverable in the primary Instagram Shop.

Some of these moves began while Systrom still helmed his photo-sharing company, but solidified under current ceo Adam Mosseri, who’s run the business since Systrom and Krieger departed in 2018.

At the time, media reports described how the co-founders butted heads with Mark Zuckerberg — an issue that seemingly hasn’t surfaced with Mosseri, who rose up through Facebook’s ranks and is close with the Instagram parent company’s ceo.

The dynamics matter in the context of how fashion and shopping have evolved on the platform.

At a London event in 2013 — roughly a year and a half after Facebook bought Instagram — Systrom weighed in about artistic versus commercial imagery on his platform, saying, “I don’t think it’s so much a boundary as it is a balance. If Instagram were full of commerce and there were ‘Buy now!’ links everywhere and that’s all you ever had, I don’t think it would get to the true spirit of communication.”

Not that Systrom was against shopping. But he spoke of a thoughtful approach that may have informed the company’s slower march toward social commerce later.

It’s hard to imagine him running today’s Instagram, a network that has grown to more than a billion users. It has become a sprawling shopping destination developing new features at a rapid clip. It’s part of the social commerce phenomenon that experts are calling “the new mall.” That is, in part, fueled by the coronavirus pandemic’s fast-tracking of online retail and explosion in social media use.

Instagram is operating amid a field of social commerce rivals ranging from Pinterest and Snapchat to Poshmark, not to mention growing interest in commerce from TikTok — the new kid on the block.

For a popular, visually driven network like Instagram, which is filled to the brim with style-obsessed users and influencers, shopping was likely always going to be its ultimate destination.

Instagram’s features expansion over the past decade from posting a single, still image to video products has propelled the influencer industry. With the launch of each new feature came new ways for influencers to attract new audiences — and make more money.

“The reason why the development of these new features could be helpful for influencers is each of our products plays a different role,” Nam continued. “They allow creators and any user to express themselves in a different way. The way you show up at IGTV is totally different from the way you express yourself on Reels.”

Instagram has been both an observer of and responder to the influencer community. In 2017, when the Federal Trade Commission sent notices to influencers about the need to be transparent about being paid for particular posts, Instagram responded by launching its paid partnerships tool. In 2020, when the COVID-19 pandemic hit, causing marketers to slash influencer spending, Instagram expanded monetization options for creators.

“I don’t think before COVID we would have expected Live Shopping to be something so many people are excited about,” Kristie Dash, beauty and fashion partnerships, Instagram, said. The future of shopping on Instagram, according to her, is augmented reality shopping.

“We have no clue when the next time consumers will feel confident walking into a store and trying on a shade of lipstick,” she said. “Brands are a lot more open to new technologies that make it easier for people to shop and feel good about what they’re buying and creators using those features as well.”

Mirroring broader market trends, the fashion and beauty verticals on Instagram have melded with those of lifestyle and wellness over the past few years — even more so during the pandemic. A fashion influencer starting a cooking IGTV series or a beauty vlogger hosting a daily sound bath meditation is now as common as Kim Kardashian posting a selfie.

The definition of who or what an influencer is has also expanded. Meme accounts — yes, meme accounts — are influencers now, too. Look no further than @DudeWithSign’s partnership with the World Health Organization to promote accurate information regarding COVID-19. In fact, memes are so popular on Instagram that the company employs someone who focuses solely on memes partnerships.

Instagram’s ubiquity has also leveled the playing field for influencers of all tiers. A few years ago, a brand likely sought to work with one of a few macro influencers or super influencers. Now, brands are warming up to the idea that following size isn’t everything.

“One of the most interesting aspects of the evolution of the influencer on Instagram, especially in the last several years, is probably the fact that there are so many more of them,” Dash said. “When I started [about three years ago], there was one group of big macro influencers that everyone knows, everyone works with. Now, I don’t feel like that is the case — in a really good way. There are so many more communities to tap into. Brands recognize the value in a small but mighty following.”

Mon Oct 5 , 2020
Are you a parent or guardian who is constantly turning to your teenage kids for advice on how to handle social media, email, video editing, security issues, and even full-on graphic design (someone’s got to make the flyer for the bake sale!)? If so, be glad you don’t have to […] 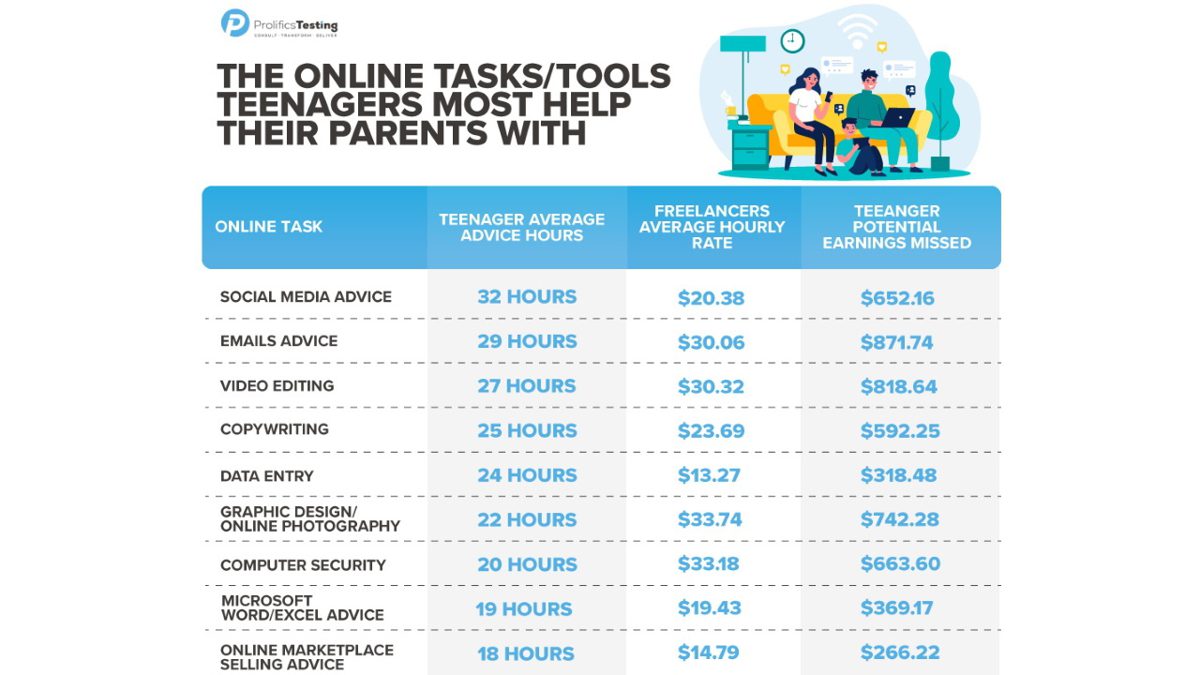