Tune in to CBS This Morning from 7 to 9 a.m. EDT to catch USA TODAY education reporter Chris Quintana discussing college reopenings as part of the ongoing USA TODAY and CBS This Morning series “School Matters.” Already reeling from the coronavirus, American colleges and universities now stand to lose hundreds of thousands of international […]

Already reeling from the coronavirus, American colleges and universities now stand to lose hundreds of thousands of international students over the country’s failure to contain the pandemic, the challenges of online learning and a more hostile U.S. government.

Also at stake: billions of dollars the international students spend annually in the country, plus the intellectual capital of having many of the world’s best and brightest minds educated in America.

Nearly 1.1 million students came to the U.S. from other countries for college or practical training programs, according to the Institute for International Education’s latest Open Doors report, which the U.S. Department of State supports. Those students spend more than $40 billion a year in the U.S., according to the latest report, which looked at the 2018-2019 school year.

But most of the students come from countries that have gotten far better control of their coronavirus outbreaks than the U.S. has, and the government here has been less welcoming.

Jessica Sarles-Dinsick, associate dean for international programs and special projects at Columbia University, said she expects about 30-40% of international students might not come to the U.S. this year. That could cost colleges about 400,000 students and the American economy about $15 billion.

Sarles-Dinsick said students’ struggles to get visas during a pandemic and worries about the pandemic itself, could cost America in many ways.

“The United States’ long history of receiving international students has been an opportunity to share the best version of who we are as a country and to recruit new residents and citizens for either the short or long term,” she said. “Including international students as an essential part of the education system spurs innovation and adds to the overall strength of our society.”

The blow could hardly come at a worse time. Colleges have been squeezed by the rising costs of going online and the loss of revenues from campus housing and overall enrollment as American students are reconsidering whether to attend.

Colleges and COVID-19: Why open colleges during a pandemic? Money is a factor

There’s never been an impact like coronavirus before, said Suzanne E. Beech, a lecturer in human geography at Ulster University in Northern Ireland and the author of a book on how students make decisions about international schools. “In the short term, I suspect there will be a really significant drop in the number of students right away,” she said.

Beech said universities in the United Kingdom, like those in the U.S., have become reliant upon international students who don’t pay a discounted price for their education.

“There’s a lot of worry about ‘What will happen to these students?’ or ‘Where will they go?’” Beech said. “And ‘Will they come back in the same numbers?’”

Concerns for safety in U.S.

Several consultants for international education who help Chinese students study abroad have noticed that fewer students wanted to apply to colleges and universities in the U.S.

That’s a big deal because about a third of America’s foreign students came from China, which is the top supplier of foreign students to 39 states and the District of Columbia, the Open Doors report shows. (India supplies the next-largest group of international students with 18.4%, followed by South Korea with 4.8%.)

Theo Kang, 31-year-old co-founder of Lighthouse Academy, a consulting agency for international education based in Beijing, said that since April both parents and students have shown concerns about studying in the U.S. due to “two major factors. One is the current intense China-U.S. relationship and another is the safety concerns.”

Those include worries about coronavirus outbreaks in the U.S., the growth of anti-Chinese xenophobia, and widespread reports of shootings, which are deemed unusual in China because of its strict gun control regulations.

Since the beginning of the pandemic, President Trump repeatedly referred to COVID-19 as a “Chinese virus.” In March, journalists were expelled in both countries and several months later the U.S. ordered China to close its consulate in Houston, Texas, and China took actions in retaliation to close the U.S. embassy in Chengdu in southwestern China.

And it’s not just Chinese students who have been made to feel uncomfortable in the U.S. Early last month, the Trump administration said it would bar international students from getting their education solely online. Harvard and MIT filed a lawsuit saying the federal government was trying to force colleges to reopen when it was unsafe to do so, and the administration agreed to end those restrictions.

Before the pandemic, most of Kang’s students ended up in American universities. “Now, 70% of our current students are thinking and starting to apply to schools in the U.K., Singapore, and some European countries,” said Kang, whose agency serves about 100 students a year.

Fall enrollment of new international students could hit its lowest level since the end of World War II, according to a National Foundation for American Policy analysis, which warns enrollment “is projected to decline 63% to 98% from the 2018-19 level.”

Some American colleges are doing what they can to improve those numbers.

As students faced travel restrictions and visa delays, Cornell University worked with a dozen universities including Peking University in China and Accra University in Ghana. Students will take lectures and live on those campuses while taking Cornell’s online courses through its Study Away program.

Such hybrid programs are designed as a way to retain students and encourage them to come to America when the coronavirus threat is reduced.

A survey of about 600 prospective international students in July by World Education Services found 38% would enroll at an American university if classes were only online. Another 32% wouldn’t enroll, and the others had not decided.

The appeal of an American education remains strong in many quarters of the world, said Molly McSweeney, a global educator who worked with Sarles-Dinsick on a paper attempting to forecast international student enrollment. Some countries have such small capacity for college enrollment that they’ve opened schools on Sundays, she said. And some families sell everything they have to send a youth to college in America.

“Students and their families go to great lengths to get that opportunity,” she said.

But none of that matters if students feel they are shut out by the government.

Qing Li, 23, from Baoji in northern China, hoped to become a first-year law student at the University of Washington’s law school. He had scheduled a visa appointment at the U.S. embassy in Shenyang, China but received a cancellation email a week before his appointment. In late July, he requested a one-year deferment of his program and got approved from the school the same day. Li said he didn’t want to take online classes.

“The class interactions might not be a big issue for students who study math or computer science,” said Li. “But for law students, class participation is everything.”

He also worried about 15-hour time differences between China and Seattle, which could have meant watching lectures between midnight and dawn.

Another first-year law student at the University of Minnesota, Ethan Cheng, 22, from Beijing, China, had scheduled three visa appointments, but all were canceled by the U.S. embassy. Early this month, he even paid about $300 for a scalper to schedule a visa appointment.

“I gave up,” said Cheng, who deferred his program for one semester. “I’m willing to bring personal protective equipment with me and take the precaution to attend the school this autumn. But without a visa, I’m not able to go to school.”

Cold-blooded or reformed? Clemency for a killer reopens a family's wounds

Wed Aug 19 , 2020
Debbie Bailey’s grave in Glendale. (Mel Melcon / Los Angeles Times) The governor believed he had found a man who had met Jesus Christ and energetically practiced his faith behind bars. Although serving a sentence that offered no hope for release, Waterbury had “dedicated himself to his rehabilitation,” Newsom wrote. […] 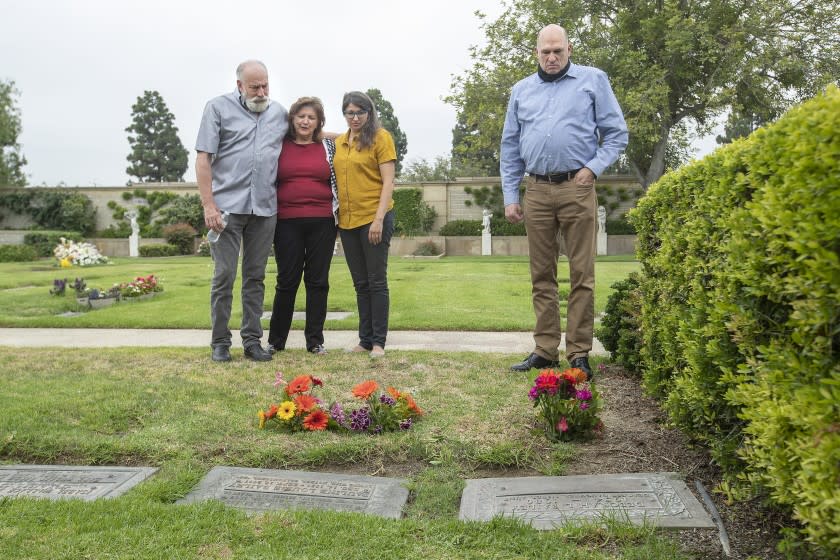