Rachel Hislop became editor-in-chief of Okayplayer in 2017 June was an unforgettable month for Rachel Hislop. Just not in the way she expected. For the last two years, she’s been plotting the relaunch of the ground-breaking and influential hip-hop website Okayplayer. Once one of America’s most popular online music destinations, […]

June was an unforgettable month for Rachel Hislop. Just not in the way she expected.

For the last two years, she’s been plotting the relaunch of the ground-breaking and influential hip-hop website Okayplayer.

Once one of America’s most popular online music destinations, its reputation had dipped in recent years; and Hislop, who’d made her name working with Beyoncé, was brought in to make it relevant again.

By the start of 2020, plans were in place. New writers had been hired, photoshoots were booked and interviews were scheduled,

Then Covid-19 hit and scattered her staff.

Then the deaths of George Floyd and Breonna Taylor irrevocably changed the site’s editorial goals.

Then her CEO, Abiola Oke, was forced to resign amid allegations of sexual harassment and creating a toxic work environment.

“It all just came tumbling down,” Hislop tells the BBC.

We spoke to the editor-in-chief twice for this article. The first interview took place a few days after Okayplayer’s relaunch, when Hislop was tired but excited at having pulled together the new site through “the fog of fatigue and trauma”.

The second came a week later, after the allegations against Oke had come to light. That time, she was more reserved. The intervening seven days had not been easy.

“I learned of the allegations as they rolled out on Twitter,” she says. “And, you know, as someone who has dealt with similar situations in my personal life, it knocked me clear off of my feet.

“It was really, really disappointing.”

The importance of Okayplayer in the early days of online music culture is hard to overstate.

Established by The Roots’ drummer Ahmir “Questlove” Thompson and author Angela Nissel in 1999, it was one of the first places where fans could interact directly with artists online – four years before MySpace and six before YouTube.

Initially conceived as a promotional tool for The Roots and their associated acts, it thrived because of its messageboards, where topics included “The Lesson”, a deep dive into music history; “Pass The Popcorn,” for movie discussions; and “Okay-activist,” which centred around political activism.

“OKP was the first place where you could talk to other black people from all over the country who shared your experiences and interests,” rapper Phonte Coleman, a regular poster on the message boards, told The Undefeated earlier this year.

“OKP removed the stigma of talking to strangers on the internet because we had the shared bond of music. If you were a Prince fan, you could be on a forum of other Prince fans. OKP is where you can find bigger music nerds than me. And I’m a big music nerd.”

But as the conversation around music and black culture moved away from blogs and messageboards to Facebook and Twitter in, the site began to feel stale.

That’s where Hislop comes in.

Born and raised in the East Flatbush section of Brooklyn to working-class immigrant parents, she’d fallen in love with magazines as a child. Her mother, who worked for the union that serviced the L’Oreal building in New York, would bring home copies of 17 and Cosmo Girl.

“I remember being like, ‘What is this world? Who are these cool people in these pages?'” she says.

“It just was so far-fetched for me because I grew up in Brooklyn and everybody was very blue collar. I’d never seen anyone who looked like me doing these types of things. But my mom would be like, ‘Write letters to the addresses in there.’ So I was like, 11 years old writing letters to the editor!

“It wasn’t until I was in my senior year of high school that I took a journalism class, and was like, ‘Oh, this is a thing! I love editing people and this red pen gives me power! This is amazing!'”

While studying journalism at university, Hislop took a summer internship at the fashion magazine Nylon. She quickly realised that, every time she returned to the office, the print team was dwindling while the website was growing – and started enrolling in classes that taught Photoshop and the web design software Dreamwaver.

“And that was kind of like my edge, like, ‘I know I’m young, but I know the internet really, really well – please just give me a chance!'”

Her first job came at the Global Grind website, where she secured an exclusive interview with Dr Dre by walking up to him at a “really fancy party wearing these pants that I had bought at the Gap for $7”.

“I just approached him like, ‘Hey I’m a reporter, would you mind if I just asked you three questions?’ and he was really welcoming.”

What she didn’t realise, as she sat on the bus ride home, filing the story on her mobile phone, was that Dre hadn’t spoken to the press for three years. His quotes – which covered his ambitions for the Beats headphone brand, and a then-unknown rapper called Kendrick Lamar – would go around the world.

Hislop was quickly promoted to style editor at Global Grind. Soon after, though, she received “a mysterious call about a mysterious job for a mysterious person”.

That person turned out to be Beyoncé. Hislop was hired to run all of the star’s websites and social media channels, and she helped mastermind the online strategy for her 2016 album, Lemonade, which highlighted messages of social justice and black empowerment.

“At the time, celebrities were on social media but they weren’t really using it to make statements,” recalls Hislop.

“We were able to work together to think about how we can use her digital voice for philanthropy, for everything, to really expand those messages about who she was as a person.”

Although the job was successful and rewarding (“it was like really intense grad school,” she says), Hislop was itching to get back into journalism.

So when Okayplayer came knocking in 2017, she saw an opportunity to take all the lessons she’d learned about digital storytelling and apply them to a “legacy brand”.

As editor-in-chief, she wants to steer the site away from “rolling news” – the video premieres, gossip and squabbles that play out in real time on social media – and commission more coverage of culture, political, and social reform.

“In the past we focused just on the music,” she says. “We don’t have that luxury any more.

“Now, we have to have enough information for our readers to be fully informed, to understand the scope of the music that we’re presenting to them. They have to have the backstory.”

When the Covid-19 lockdown took effect in March, Hislop found herself reconfiguring Okayplayer from her teenage bedroom.

There, she commissioned digital cover stories with reggae artist Buju Banton and stars-in-the-making Chloe x Halle, reflecting her vision of a site that could “provide the bridges that tie legacy to the new age”.

But just as the team were about to hit the publish button, George Floyd died in police custody in Minneapolis, triggering a huge wave of Black Lives Matter protests.

Hislop paused the relaunch and asked her staff a question: “What is our role in this protest moment?”

It was a shrewd point. The 1960s civil rights movement helped establish black-owned magazines like Ebony and Jet, which in turn helped set the tone of the conversation for black communities. But in 2020, citizens are mobilising and organising online. Where does a site like Okayplayer fit into that landscape?

“It’s something I think about a lot,” says Hislop.

Her approach was eventually inspired by the original incarnation of Okayplayer, which put the audience at the heart of the conversation.

“I can’t sit here and say that I know exactly what a low income person in Flint, Michigan is going through right now – but I do have a platform where we can reach out to people who are living those realities and allow them the space to write about these things from their point of view.”

She adds that discovering and supporting new voices, especially minority voices, has got to become a priority for media companies across the board.

“A lot of young black journalists burn out really early in their careers and it’s really because that mentorship is missing,” she says.

“It takes real systematic change within organisations to make sure that the black and brown people who are on the staff, that are telling these stories, feel supported. That their ideas feel like they’re respected and that they’re not shut down all the time.

“We have to continue to get people in positions of power so that they can lift as they climb.”

Hislop is in such a position right now – which is why it’s been so demoralising to have her achievements overshadowed by the exit of Okayplayer’s CEO.

The accusations against Abiola Oke surfaced just days after the website relaunched.

Other people came forward with similar allegations, including one woman who claimed Oke sexually harassed her.

He resigned the next day; and later posted a lengthy statement saying he was “deeply sorry” for making black female colleagues “feel invisible or silenced”. He also “emphatically and unequivocally” denied sexual assault.

Hislop also responded, saying the accusations were “a gut check”, and acknowledging her own failures in speaking up for the victims, two of whom reported directly to her.

Behind the scenes, she went to the board of directors with a list of demands from her editorial team. “If they’re not met,” she told them, “I’ll step down.”

Those demands were met and published online. Among the provisions were the inclusion of black women to the board, and establishing an external, independent investigation into the company’s culture.

“I regret not doing it sooner,” she says, “But I’m doing my best right now to create a better environment for the people that are here, and an environment that they’re proud to create work in.

“There’s no right answer, and there’s no answer that pleases everyone, but I’m just trying to lead with humanity and compassion and hope that this brings us where we need to go.”

Wed Jul 8 , 2020
(Bloomberg) — Facebook Inc., Google and Twitter Inc. — all of which are blocked in the mainland — are now headed toward a showdown with China that could end up making Hong Kong feel more like Beijing. Hours after Hong Kong announced sweeping new powers to police the internet on […] 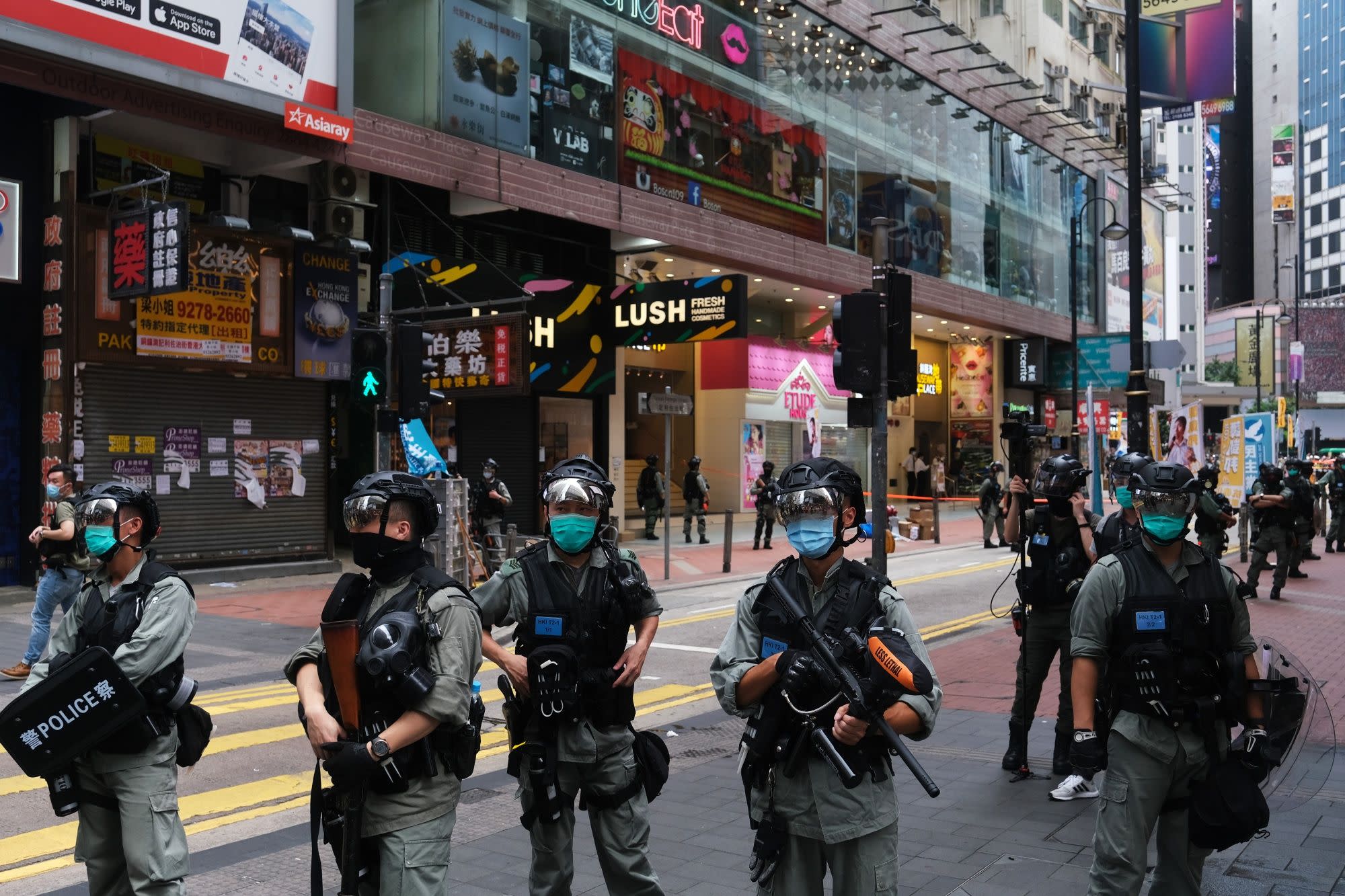