Getty Images Yoga is not supposed to be about how you look. In fact, the purpose of this 5,000-year-old Indian practice is the very opposite: to combat the superficial with the spiritual and encourage mental transformation through movement. But in recent years, it seems these intentions have fallen to the […]

Yoga is not supposed to be about how you look. In fact, the purpose of this 5,000-year-old Indian practice is the very opposite: to combat the superficial with the spiritual and encourage mental transformation through movement.

But in recent years, it seems these intentions have fallen to the wayside.

Thanks to the advent of Instagram, millions of avid yogis around the world have taken to sharing daring and abstract poses online, accruing thousands of followers and launching careers as “yoga influencers” as a result. Search #yoga on the platform and you’ll find 75.5 million photos of people bending their limbs backwards, forwards and sideways in all sorts of Valencia-filtered locations. And celebrities are among them, with everyone from Britney Spears and Miranda Kerr to Miley Cyrus and Beyoncé demonstrating their finest yoga moves.

Some of the poses are harmless – a downward dog here, a lotus there – but the world of yoga influencers is competitive. The more striking the photograph, the better it will perform. So more people start doing acrobatic yoga poses just for the ‘gram, giving way to a trend where followers try to recreate them with little, or no, training.

Not only does this completely contradict what yoga is supposed to be, but experts warn it is also causing injuries. A recent US study found that hospital-treated yoga injuries have increased from 9.5 for every 100,000 yoga participants to 17 per 100,000 in just 13 years.

“The rise of Instagram has led to the emphasis on yoga as a physical practice and less a spiritual one,” says Genny Wilkinson Priest, yoga manager at triyoga. “Yoga becomes misunderstood and is reduced to a show where Instagram ‘yoga-lebrities’ are little more than entertainment for the viewing public.”

While social media has helped engage younger generations with yoga, and make it more accessible to those who cannot afford classes, it has encouraged many people to train for the wrong reasons, adds Priest.

“People who are not professionally trained end up engaging in yoga on Instagram largely out of their own personal vanities, and in doing so may well hurt themselves as they attempt to copy postures that their bodies are not ready for,” she says.

“The situation worsens when practitioners fail to take into account the fact their body is unique to them.”

For example, Priest is able to pose with her legs behind her head but only because her skeletal structure allows it. “If another person tries the same posture, a person whose hips are built quite differently than mine, well that’s a recipe for injury and disaster,” she adds. “Nobody on Instagram ever tells you not to try this at home, but maybe they should.”

Gemma Soul, head of Yoga at Psycle London, points out that mobility ranges from person to person, let alone other health factors. ​

“So an Instagram post about how to do a yoga pose could never ‘blanket-help’ everyone as people need one-to-one face time in order to receive the correct alignment and assistance for their own individual bodies,” she says.

But on Instagram, this information (if included at all) is often buried in posts featuring impressive poses and postures, where the photograph is more striking than the caption.

In November, leading physiotherapist Benoy Mathew told The Telegraph that social media has “definitely contributed” to people trying to take their yoga practice to the next level “purely for aesthetic reasons”.

“Just because you can get your head to touch the floor, you might manage to get an ego boost but it doesn’t necessarily mean you are going to have a huge health boost,” he added before criticising those who purport to be instructors but have little to no physiological knowledge.

“There is a big variation in the experience of yoga instructors. Some people who teach the sport come from a fitness background with a lot of knowledge of the body, whereas others come from a purely aesthetic background.

“It has been over commercialised and I think that is what is causing a lot of the problems,” he said.

Some of the injuries sustained from yoga have been severe. In 2018, a 23-year-old woman in Mexico broke 110 bones after attempting a yoga pose on her balcony and falling 80 feet. The previous year, a woman in Maryland suffered a stroke after tearing her artery while filming an advanced headstand tutorial for Instagram.

Priest explains that those who are not experienced practitioners should always have the guidance of an instructor, either in a class or at home. Not only will this prevent injury, but it also ensures that the spiritual aspect of yoga is not lost, she adds.

“Social media takes yoga out of the yoga school and into the sitting room where the unique, relational aspect of teaching is absent.

“There is no substitute for the personal relationship that is built with an experienced, qualified teacher who can see you, hear you, and talk to you. Online yoga and online posts about it are best used as supplements to a regular practice with a teacher.”

Even the yoga influencers themselves would advise following taking any online tips with a pinch of salt. Hannah Barrett, aka Yoga Girl London, says users should always look for video tutorials rather than still pictures.

“Seek information from a qualified teacher or someone who works alongside a qualified team of experts,” Barrett says, before adding that she works with physiotherapist Finola Burrell for all of her yoga content.

Independent yoga instructor Farah Shafiq agrees, adding that when you do choose to practise yoga online, be sure to check where the guidance is coming from.

“Find out whether the teacher providing the instructions is qualified and prioritises good form,” she says.

The best teachers on YouTube to keep you calm in lockdown

Sun Jun 21 , 2020
Getty The murder of black American George Floyd in May has been a catalyst for demanding racial equality across the world. Conversations have swiftly moved beyond police brutality to interrogate the wider racist context it sits in. Workplace discrimination, institutionalised racism and Britain’s colonial hangover are all issues demanding change […] 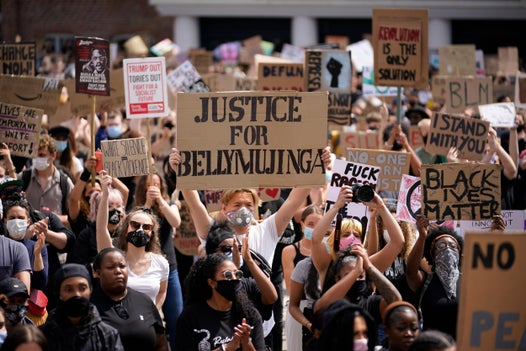