The 90-year-old Colorado man’s decades-long search for a former partner named Phillip ended in him coming out online – and gaining national attention – nearly 60 years after his brief relationship with the love of his life.

Felts, a Navy veteran, knew he was gay since he was 12 years old, and despite a few brief flings during his adolescence and young adulthood, he kept it hidden because of his Christian upbringing. It wasn’t until meeting Phillip that he briefly lived out his life as an out gay man.

“The only thing I could do was just hide it, and I hid it deep and dark, and I stayed that in that basement for the rest of my life practically,” he said. “I just denied it and ignored it.”

The way Felts tells it, he planned on sending a message to his close friends and family – and, by accident or fate, shared it as a public Facebook post.

“I had really planned on taking it to the grave with me, and never, never being (anything) other than straight,” Felts told USA TODAY.

With the help of a kind stranger on Facebook by the name of Tina Wood, he was able to track down Phillip Allen Jones – who died just a few years ago. His longtime partner, Jones’ niece told him, according to a Facebook post, died before him.

Felts spoke to USA TODAY from his home in Arvada, Colorado, about his first Pride celebration in quarantine, the search for his first love and his advice for people who are struggling to come out.

This interview has been condensed.

Would you walk me through your decision to come out this year?

Back in April, Colorado, like other places, went under the pandemic and lockdown. And, so here I was at home – and I live alone … I thought, OK, I think this is the time that I should write my memoirs. … It really got back to some old, old memories of my time in the past and I wrote them down. And one of them was about my first love, Phillip.

A little later about in late May, early June, I was talking to my daughter one day and I just said to her out of the blue, I said, “I wish I had never left Phillip.” And she had never heard of Philip before, and so I thought, well, I’m going to have to explain this one. So I did; I told her what it was and she was very accepting.

And from that, then I thought, well, she did very good at taking that, better than I expected. So I think I’m going to have to just let everybody know. And I decided to send emails to my friends, which I did, but I sent the same email as a Facebook (post publicly) which I did not really intend to do, but it did. And it went everywhere and I started getting replies real quick. … That’s how I came out, it was totally unintentional. I had really planned on taking it to the grave with me and never, never being (anything) other than straight.

By the time your story reached national headlines, it coincided with Pride Month. How did you celebrate your first Pride as an out gay man?

My daughter came out 20 years ago to me. So for 20 years then we’d been living with a gay daughter, but a straight father who was really gay. In support of her, I had been attending the (Denver) Pride Fest as a volunteer and helping them with some of the work that goes on there. I did that until I couldn’t walk down there anymore. …

This year being the first year as an out (gay man) for the virtual Pride Fest, I did the 5K race. I did it with a walker and I did it for one half-mile in 22 minutes. We picked a very nice city park near here, and I walked on the sidewalk around that for my portion of the thing. And it was nice to be wearing my rainbow hoodie out in public, where people could see it and me. … I’ve never felt so free. Not having to judge everything I do on the basis of, “Will this out me?”

What was the process of meeting Phillip, and what that was like for you?

I finished high school and two years of college, then I joined the Navy and spent four years on a minesweeper. … When I got out of college, I went home and finished my bachelor’s degree. Then I decided to go back to California, where I really had loved the land out there when I was in the Navy. I went to work for a place in Long Beach called Retail Credit Company. We do investigations of insurance applications in the morning, come in in the afternoon and write up reports.

As a new person, I was struggling getting those reports written when Phillip, another agent, came over to help me. We hit it off real good, started going out for coffee, and then we started dating. And then eventually I moved up to his house in Bellflower, where he lived with his sister and her daughter. So I was there from, for about nine or 10 months, really. And Phillip and I, we’re living there together. Every weekend, we’d go out on excursions to the area, to ghost towns, to the cactus bloom, down to the seashore, things like that. So we were constantly together there.

And then one Sunday morning, he sang in the choir. He came from the Church of God, went to a four year college of the Church of God in Anderson, Indiana. I sat in the pews watching the goings-on, and as I, sat there, my old Christian values started popping up and just swept over me like a windstorm. … I had this conflict right then and there. …  We lasted about another month before I just couldn’t take it any longer. And I left and have actually been kind of looking for Phillip ever since then.

Because of that, I had to make the decision: straight or gay. And since I had said, I can’t do this with Phillip, then I can’t do it with anybody. So at that point, it was to go straight. …

I went back home to Dodge City, met an old friend who had a floral shop in Colorado Springs that he wanted me to manage. I went out there as the manager. I joined the Methodist Church. I became a member of the staff. I met a young lady in the adult youth group and we started dating and I married her on June 1, 1963. In 1972, we had a daughter. In 1980, we got divorced. And I had been absolutely straight that entire time, but the minute we got divorced, I tried to find Philip again, went through the phone books in the library because there was no internet in those days. Never found Phillip, but could not come out because if I had, I would not have custody of my daughter. The state would not allow me to be a gay man and keep my daughter at home so I could not come out then.

And so I just had to stay straight until she was out of school, but then it was too late. It didn’t matter. … She came out to me over 20 years ago, which rather surprised me because she says I’m gay and what do I say? Well, I can’t say I’m gay also.

All I can say is, well, this is the way the church says you can’t be, you don’t be. She says, I told her it wouldn’t last. And it’s been 25 years now. And they have two kids. So it’s lasting pretty well.

That’s when I started deciding that gay was okay to be out, but I wasn’t out. I didn’t, I just didn’t do it. And then when I wrote my memoirs … a lady on the East Coast who does searching for parents of children who are adopted, wrote me and said that she’d be glad to look for Phillip for me. And within a week she had found first, she thought he was still alive. And I was really overjoyed when she sent me that memo. But then the next one was no, he died a few years ago. So then I was able to get ahold of Phillip’s niece who sent me some pictures of his and told me a little bit about him. So I missed out by a few years. But at least I, I know where he is.

What advice would you have for anybody young or old about living your life to the fullest and being out and proud?

I know I’m in an unusual position and I just came out just like that. I hadn’t even planned on it or no, nothing, but I would think that if a person is contemplating coming out, they first need to check on what support systems are available to them.

When I came out there was… I wasn’t looking for anything and I, I have found it and I’m utilizing it. Back when I thought about coming out, there were no support groups.

The other thing they will find when they come out, what I found, it’s amazing how much love there is out in the community. And they’re going to share it with you. They’re going to pour it on you by the bucket full. I get memo after memo telling me how they are supporting me and they love me. Never expected that. I didn’t expect any kind of response like I’ve been getting. And so I think other people will kind of have the same experience that they might be surprised just how many people support them. It’s never too late to come out.

This article originally appeared on USA TODAY: Kenneth Felts, 90-year-old man, came out as gay to look for lost love

Thu Aug 6 , 2020
Suze Orman says most Americans have the “wrong, wrong, wrong” idea when they choose a financial adviser. In her latest blog post, the personal finance guru cites a 2017 survey that found 53% of Americans believe financial advisers are required by law to put their clients’ best interests ahead of […] 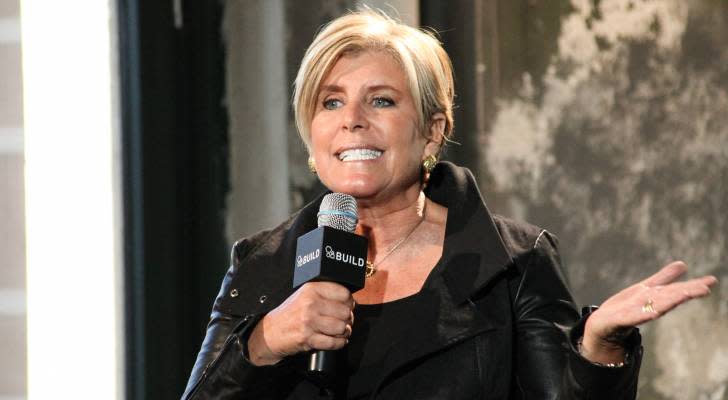