A week before Kanye West announced that he was running for the highest seat in the White House, he revealed plans to rebuild another famed American institution. Gap recently inked a 10-year deal with Kanye West for a Yeezy Gap apparel line. The co-branded apparel line for men, women, and […]

A week before Kanye West announced that he was running for the highest seat in the White House, he revealed plans to rebuild another famed American institution. Gap recently inked a 10-year deal with Kanye West for a Yeezy Gap apparel line. The co-branded apparel line for men, women, and children is set to arrive at Gap stores in 2021. Gap made $4.6 billion in annual sales last year and anticipates that the Yeezy Gap line will bring in an additional $1 billion in annual sales. For comparison, Adidas’ footwear deal with West reportedly pooled in $1.3 billion in sales for the brand last year.

West’s deal with Adidas is novel in itself because of the royalties he receives. Royalties are legally-binding payments given to designers for their originally-created works—in West’s case this is the Yeezy trademark. At Adidas, West receives 15 percent in royalties on wholesale on top of a marketing fee. That is a significant royalty deal in comparison to an athlete like Micheal Jordan, who only gets around 5 percent royalties from his deal with Nike—although the Jordan Brand product assortment is much larger than Yeezy for Adidas.

West’s deal is very different from Telfar Clemens’ canceled collaboration with the Gap. Clemens was offered royalties, a $100,000 design fee, and an option to renew the deal after two seasons. West on the other hand will receive royalties, have the option to renew the deal after the first five years, and most importantly, acquire up to 8.5 million shares of common stock from Gap—as far as we know, West doesn’t hold any Adidas stock or equity. For clarity, common stock are shares of ownership of a company. So along with royalties, West also has the chance to gain equity or a piece of Gap if his line meets certain sales targets.

According to an SEC Filing, West can receive a third of those 8.5 million shares of Gap if his apparel line makes $250 million in net sales in one fiscal year—to clarify, a fiscal year is an one-year period defined by the company for financial purposes. And if the line makes $700 million in net sales during a fiscal year, he can receive all 8.5 million shares. According to Susan Scafidi, the founder of Fordham’s Fashion Law Institute, it’s an unprecedented deal between a brand and a celebrity.

“I don’t think I have seen a deal this smart, perhaps, since Tom Ford and Gucci. We’re going back 20 years when Tom Ford was at Gucci,” says Scafidi. “He [Tom Ford] took a brand that had been historically very relevant that had fallen on hard times, made it extremely buzzy again, and didn’t just take a salary, much like Kanye isn’t just taking royalties, he took stock.”

For context, eight years after Tom Ford became the creative director of Gucci, he not only became the Vice Chairman of the luxury house, but also held 1.6 million shares of Gucci stock in 2002—at that point Ford held more shares than any other manager within the company. By 2003, Ford made $138 million within three years by simply cashing out just some of his stock. Around this time, Ford owned 1.2 percent of all outstanding shares of Gucci. Although Gucci stock was worth double than what Gap’s all-time high was in 2000, West is presented with a similar opportunity to own 2.3 percent of Gap’s outstanding shares. Speculatively, if West can restore Gap to its former glory—and raise the value of its shares to as much as $50— he could make well over $275 million off those stocks alone. That’s nearly double the amount he’s made off royalties from his Yeezy Adidas deal last year, which was estimated to be around $140 million

Read our interview with Scafidi to better understand the business behind West’s monumental deal with Gap.

Let’s say Kanye brings Gap stock back up to $50 a share. How much money can he possibly make?
Kanye doesn’t just receive shares by hitting sales targets; he has the option to buy shares at a set price. If Gap stock skyrockets to $50 and Kanye hits sales targets, he could buy half of the 8.5 million shares for $25 rather than $50 and the other half of the shares at a price defined in the deal, which could be either $10.16 (the closing price on the date of the agreement) or an undisclosed average price. I’m no mathematician, but in other words, Kanye could have an option to buy 8.5 million shares valued at $425 million for $149.43 million. Who doesn’t love a 65 percent discount?

Do you think that hitting $250 million in net sales would be possible for the Yeezy Gap line within a fiscal year, or do you expect it to take a little more time?
It depends on the product. It depends on the product mix. It depends on how much product they put in stores. Because one of Yeezy’s strategies has always been the Hermès Birkin strategy, right? Limited quantity, limited drops, never allowing supply to exceed demand. Gap is different. Gap is not about scarcity. And so, this is going to be a different strategy for Yeezy. But I think that with the right marketing, with the right product mix, yes, they could hit $250 million the first year, easy.

Did they mention what the royalties were?
They did not, and I looked. Typically, that’s treated as confidential for competitive reasons. You don’t want your competitors to know exactly what royalties you’re getting. Gap certainly doesn’t want any of its other collaborators to know what Kanye is getting.

Compared to another celebrity deals such as Rihanna and LVMH, how do you think these deals compare to one another?
This is a much less traditional deal. LVMH is helping Rihanna create a house, which is extraordinary. Kanye is doing a collab with Gap, and certainly mass-market brands have done lots of collabs. But it is highly unusual for a collab to involve equity, especially in such a storied company as Gap.

Is there any other collab like this with equity that you have in mind other than Tom Ford and Gucci, or was that the only one?
That was the one that came to mind. And there may be others out there, but it’s very unusual. And again, the Gucci-Tom Ford collab, which was actually architected by a guy named Domenico De Sole, who is Tom Ford’s close business partner and managed the company while Tom Ford was there, was really a landmark. It made Tom Ford and Domenico De Sole very wealthy guys. This is again the same kind of very audacious deal where Kanye knows what he’s worth, as does Gap, and is creatively cutting himself a piece of the American fashion pie. Gap is so iconic and this is a great moment to invest in Gap. They dismissed their C.E.O. late last year and are in a period of transition. It is exactly the right time for someone to come in with a plan and restore it to its former glory. And if anyone can do it, if anyone can make Gap the great American brand 2.0, it’s Kanye.

And so, at a moment when we are all a little bit pessimistic about the future of the economy in general, and the fashion industry in particular, this is an extreme expression of optimism. And for that reason alone, it could become a self-fulfilling prophecy. It’s going to get a lot of attention, and it’s going to make people look twice at Gap. And the idea that Gap could lead American fashion out of a recession and into recovery with Kanye at the forefront of that would be an amazing American success story. In the fashion industry, but in business more generally. It says a lot about the power of personality in fashion.

I mean, think about it. When’s the last time you were excited about shopping at Gap? It’s less of a risk for Yeezy than opening a lot of its own stores. Gap has stores. It’s closed a number of them as the retail footprint in general shrinks and we think a lot more about online. But from what I understand from the deal, Yeezy wants a hand, and Kanye wants a hand in merchandising at Gap in the presentation, in stores and online.

So Kanye really wants to completely recreate Gap in his own image. Yes, Yeezy could have done it on its own, but injecting the Yeezy DNA into the shell of Gap is going to create something completely new. And they will start already halfway to success, rather than having to build from scratch. It’s just really a mind-boggling deal, as we say, in these troubled times.

Mon Jul 13 , 2020
LOS ANGELES — California’s two largest school districts, Los Angeles and San Diego, will begin the new school year next month but students will not return to campuses due to the threat of the coronavirus. The districts said in a joint statement Monday they will start the school year with […] 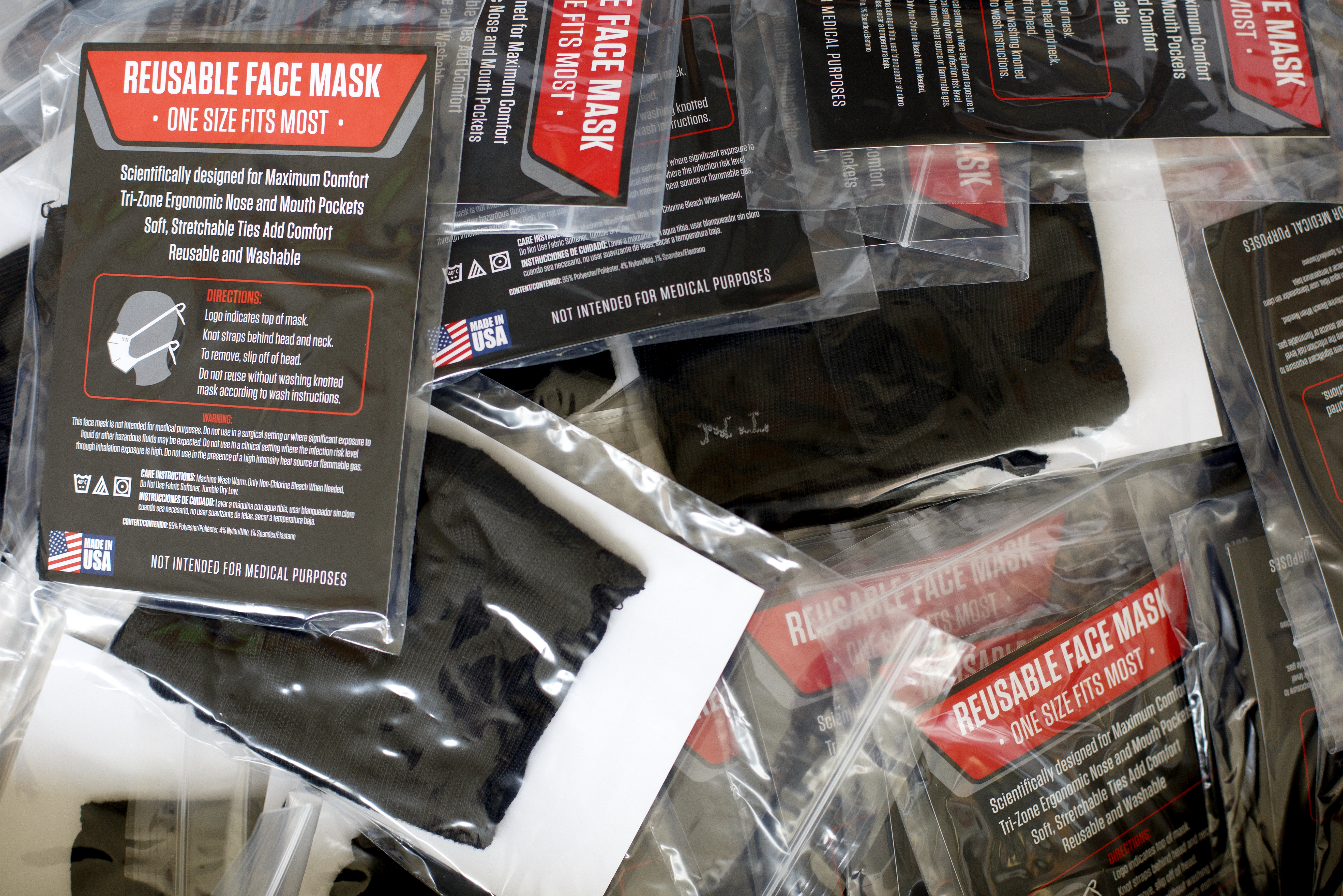