Antivirus, firewall, spam filter, identity protection—there are a vast number of protective functions that make up a security suite. In addition, the average modern household has a ton of devices to protect. That’s where a cross-platform multi-device security suite comes in. This type of utility packs all the protection you’ll […]

Antivirus, firewall, spam filter, identity protection—there are a vast number of protective functions that make up a security suite. In addition, the average modern household has a ton of devices to protect. That’s where a cross-platform multi-device security suite comes in. This type of utility packs all the protection you’ll need and lets you apply it to all your devices, whether they run Windows, macOS, Android, or iOS. Kaspersky Security Cloud and Norton 360 Deluxe are our Editors’ Choice picks in this category, but only one of them can be the best. Which is it?

Well, it’s more complicated than that. You pay $149.99 for a Kaspersky family license that protects up to 10 devices. Note that until recently that price got you 20 devices. As for Norton, $149.99 per year still gets you five licenses, but adds LifeLock identity protection. Given that you can’t get standalone LifeLock protection for less than $100 or so, Norton seems a good deal, but a direct comparison with Kaspersky is tough.

If you want 10 device licenses with Norton, you pay $249.99. Bumping that to $349.99 removes any limit on devices, so you can install protection on every device in your household. And both levels come with increased features and payouts in the LifeLock department.

At the basic five-device level, these two products do cost nearly the same. But for any other configuration the comparison is murky.

Which Suite Has a Better VPN?

Software installed on your devices protects them, and the data you keep on them. Once that data heads out into the wild internet, it needs something more. By using a Virtual Private Network, or VPN, you keep your data protected in transit. You also protect your privacy, because any website trying to track you through your IP address just winds up tracking the VPN server.

All of Kaspersky’s current products, from Kaspersky Security Cloud Free up to the top-tier suite discussed here, include Kaspersky’s Secure Connect VPN. And at all levels, the VPN is hobbled, with a limited amount of bandwidth per day, no access to advanced features, and no ability to select the location of the VPN server you’ll use. If you want unfettered access to Kaspersky’s VPN, you must pay a separate fee of $4.99 per month or $29.99 per year.

As for Norton, you get full access to the built-in VPN at all levels. Pay for five suite licenses, you get five VPN license. Pay for 10, you get 10 of the VPN, and likewise with the pricey unlimited option. That’s a clear win for Norton.

Backup at the Next Level

In a very real way, backup provides security like nothing else. Ransomware has no power over you if you’ve got backups stashed safely away. If your computer gets busted or stolen, that’s a shame, but at least you can restore your documents from backup. Naturally, both mega-suites provide a backup system.

With either suite, you can back up your files to any local, network, or removable drive, but if you want the security of offsite backups, Norton has a decided edge. Kaspersky doesn’t offer hosting for backups. The closest it comes is a system that lets you store backups in a Dropbox account that you provide. If the backups are bigger than a free Dropbox account can handle, that’s effectively another bump to Kaspersky’s price.

Norton gives you 50GB of hosted storage for your online backups, which is great. At the 10-license and unlimited levels, that rises to 250GB and 500GB respectively. All of this, naturally, comes at no extra charge. Norton’s backup offering is clearly better.

A Slight Kaspersky Edge on Other Platforms

Installed on a Mac, both products give you a full-fledged security suite, though without the bounty of features available under Windows. In fact, Kaspersky Internet Security for Mac and Norton 360 Deluxe (for Mac) are Editors’ Choice products for Mac antivirus protection.

That leaves Android. Android and Windows are the most popular targets for malware coders, because they’re widely used and aren’t nearly as buttoned-down as Apple’s platforms. Antivirus is a must for Android security, and both suites offer it. But with mobile devices, loss or theft can be just as much a worry as malware. Norton has pulled its antitheft component for Android, leaving Kaspersky with an edge in this area.

Norton Noses Ahead in Test Scores

Effective antivirus protection is at the core of a security suite. We follow four labs around the world that put antivirus products through grueling tests, and all four include both Kaspersky and Norton in their regular testing reports. Each lab has its own scoring system, so I’ve devised an algorithm to map all the results onto a 10-point scale and combine them. My algorithm yields an impressive 9.7 points for Kaspersky, and 9.8 points for Norton.

Not every antivirus has the honor to be lab-tested for efficacy. To handle those without sufficient lab results, and to get a feel for each product, we perform our own extensive malware protection tests. One test challenges each product to prevent infestation by a collection of malware samples we curated and analyzed ourselves. The product can wipe out malware on sight, catch it based on behavior after installation, roll back malicious behavior, or protect in any other way. In that test, Kaspersky scored 9.3 of 10 possible points while Norton managed 9.5.

Catching malware before it ever lands on your computer is laudable, so we also test each product with recently discovered malware-hosting URLs. In that test, Norton achieved 97 percent protection, while Kaspersky dropped to 81 percent. Kaspersky has done better in the past.

Malware-hosting URLs aren’t the only online danger. Phishing pages are frauds that imitate sensitive pages such as banks, shopping sites, or even dating sites. If you log in to the fake site, the fraudsters now have your credentials. In a test using recent real-world phishing pages, Norton achieved 99 percent protection, slightly beating Kaspersky’s 96 percent.

Exploit attacks work by taking advantage of unpatched security holes in the operating system and popular apps such as browsers. We tested both products by hitting them with exploits generated by the CORE Impact penetration tool. Both scored in the mid-80 percentages, significantly better than any other tested products. Overall, though, Norton has a slight edge when it comes to test results.

Both of these products are sprawling suites, with tons of features. Among other things they both offer: an online dashboard; a smart firewall; a parental control system that gets four stars as a standalone; a simple password manager; a spam filter; a local backup system; and webcam protection.

However, Kaspersky offers a lot of security features not found in Norton—significant features, not just window dressing. Its home network scanner inventories all the devices on your network and warns you when a potential intruder appears. You can use it to protect your most important files using encryption, and then securely delete the plain-text originals. The Safe Money banking protection system prevents other processes from interfering with your online banking transactions. And Kaspersky’s software updater finds and applies missing security patches. There’s a lot of overlap between the two, but Kaspersky offers more feature-wise.

And the Winner Is…

Norton may not be able to outweigh Kaspersky on sheer quantity of features, but it offers some very high-quality features that Kaspersky doesn’t. You get a fully-functional VPN with Norton, where Kaspersky demands extra payment, for one thing. And the fact that Norton offers hosted storage for your backups means you don’t have to worry about an office disaster that takes out your computer and your backups.

Not only that, Norton beat Kaspersky in just about every test. Not by much, mind you, but it consistently earned an extra percentage or fraction of a point. Both products are excellent, but Norton 360 Deluxe wins this showdown.

How to use Apple Pay with your iPhone, Apple Watch, or Mac

Thu Oct 1 , 2020
TipRanks Goldman Sachs Predicts Over 40% Rally for These 3 Stocks A new wave of optimism is splashing onto the Street. Investment firm Goldman Sachs just gave its three-month stock forecast a boost, lifting it from Neutral to Overweight, with it also projecting “high single-digital returns” for global stocks over […] 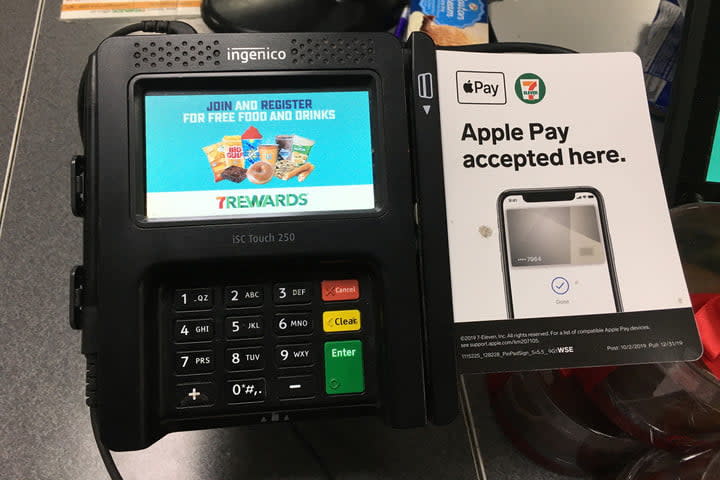