KENOSHA, Wis. – It looks like Miami before a hurricane, only the plywood has gone up after the storm of rage, violence and fire has already come through. This is Uptown, late Friday morning, as a crew of volunteers decorate the plywood sheets, bringing color and light to a stretch of the city where […]

KENOSHA, Wis. – It looks like Miami before a hurricane, only the plywood has gone up after the storm of rage, violence and fire has already come through.

This is Uptown, late Friday morning, as a crew of volunteers decorate the plywood sheets, bringing color and light to a stretch of the city where you can still pick up an acrid scent of smoke.

Jasmine and Victoria Fields, sisters born, raised and educated in Kenosha, are working outside a shop set between what was once a bridal store and a payday loan office.

The Fields sisters are painting a heart, inscribed with the words, “Justice for Jacob.”

“So surreal to see Kenosha, Wisconsin, to see that on the news,” said Jasmine. “To see pro athletes tweet about it. To see the Milwaukee Bucks do what they did. It’s surreal in the worst possible way. But I hope it brings about overdue change.”

An American Tragedy is unfolding in yet another city.

What began Aug. 23 shortly after 5 p.m. as a police call for a domestic incident has spiraled into yet another reckoning on race and policing during the heat of an election season in which the country’s divisions have been laid bare.

The shooting of Jacob Blake, a 29-year-old Black man, by a white Kenosha police officer was captured on video by a bystander. The shouts, shots and images went viral.

There were protests. And unrest.

Late Tuesday night, two men were killed and another man was wounded. A 17-year-old from Antioch, Illinois, Kyle Rittenhouse, who was carrying an AR-15, faces criminal charges.

The legal truth will be left to the lawyers, judges and juries.

But that’s a long way off.

Until then, Kenosha will have to grapple with the aftermath, all while a wider world watches and reacts.

The story of Kenosha burned through the nation.

The Milwaukee Bucks didn’t take the floor for a playoff game as they implored the Wisconsin Legislature to “address issues of police accountability, brutality and criminal justice reform.” Call it a boycott or a wildcat strike, the action moved other teams in basketball and beyond, including the Milwaukee Brewers, to take similar stands.

Kenosha was invoked at the Republican National Convention, as the party issued a  law-and-order message.

“In the strongest possible terms, the Republican Party condemns the rioting, looting, arson and violence we have seen in Democrat-run cities like Kenosha, Minneapolis, Portland, Chicago, New York and many others,” President Donald Trump declared during his acceptance speech on the South Lawn of the White House.

Watch: Two people killed and one injured from shootings during Kenosha protests over Jacob Blake

Meanwhile, the Democratic ticket of Joe Biden and Kamala Harris spoke with Blake’s family. Biden said the police officer’s shots “pierce the soul of the nation.” And in a video posted online, Biden said “protesting brutality is a right and absolutely necessary. But burning down communities is not protest, it’s needless violence.”

Kenosha is under curfew.

The Wisconsin National Guard, aided by units from other states, is on the scene.

A fence rings the Kenosha County Courthouse and jail, an early flashpoint between demonstrators and police. There are scorch marks on the pavement where a city truck was burned. Plywood has gone up on other buildings in the historic Civic Center District.

There’s an eerie midday quiet in the 2800 block of 40th Street, where Blake was shot.

Outside the home where the incident took place, two plastic tricycles are in the yard. A Chevy Impala with smashed front and back windows is parked on the street.

At an apartment building across the street, two women are playing with a puppy.

“We don’t know anything,” one woman said.

On Sheridan Road between 59th and 63rd streets, the scene of Tuesday’s violence, where militia were seen and where Rittenhouse was accused of shooting demonstrators, all appears normal.

But a message painted on the side of a building stands out. It reads: “Blind Disabled 2d Floor.”

Imagine having to paint that on your home.

The Fields sisters, who are biracial, expressed a love for their hometown but say there are racial divides.

“Black Lives Matter shouldn’t be a statement of any sort of controversy. It’s just sad,” said Jasmine Fields, who now lives in Sturtevant, Wisconsin. “I’m just hoping that this is an opportunity for people to realize that for Kenosha and the state of Wisconsin, the worst place for black people in the country, needs change.”

Victoria Fields, a college student who still lives here, said she wasn’t surprised by the shooting of Blake.

“It has been happening for generations,” she said. “I just hope that more people, now that it’s happening in my community, will see that this is a problem. All I ask is for change and to just be treated like you’d want to be treated. Like equals. That’s all we ask.”

‘They just have cameras now’

In this summer of protest, Kenosha resident Xavier Wallace said he has marched against police brutality in Milwaukee and Chicago.

“It ain’t real until it hits home for some people,” he said.

Wallace said Kenosha residents who are frustrated with Blake’s shooting are feeling “extended pain” from their own negative interactions with law enforcement.

“This ain’t nothing new, they just have cameras now,” Wallace said of people filming alleged acts of police brutality.

Robin Spangler, who works for a management company that owns a string of properties damaged in the Uptown neighborhood, was out the other day screwing in a piece of plywood over a door of the damaged Furniture Warehouse store.

“People are looking forward to moving forward,” he said. “It happened, now what do you do? People I talk to are surprisingly upbeat. The grocery store is about four doors down. He’s such a nice guy. He said, ‘It’s happened, we just have to find another place to open.’ His place is destroyed.”

Spangler called those who did the damage “thugs coming in from outside trying to make a point. I don’t think their point is very well received by even the community. When I was talking to people around here, all the African American people up and down the block, 7:30 in the morning watching it burn, they’re going, ‘Why? Why did they do this?’ “

On Monday night, when unrest swept through the city, King said he and several other church members stood outside the storefront facility at 6114 22nd Ave.

“We weren’t armed but we were standing, I believe, with the angels of God,” he said.

The building came through unscathed, yet healing needs to take place, he said.

Between the initial shooting, the unrest, and the deaths of two people, King said, “I think it’s gone too far.”

Leaders here are aware that it’s going to take time to rebuild buildings as well as regain a sense of trust in the community.

They are in a tough spot, appearing at times to be overwhelmed by the pace of events and the crush of media attention.

“Someone asked me this morning, ‘What do you want the nation and the world to think Kenosha is?’,” Kenosha County Sheriff David Beth said Friday. “It’s a great place to live, it’s a great place to raise a family. We have great schools. We have great parks and lakes. … And when all of this calms down, like I hope it’s trending toward right now, if you really go outside this small area right here, life goes on as normal in Kenosha County and the City of Kenosha.”

‘Love is going to go a long way’

Dirk Ingram, a licensed massage therapist, has been going around town with stencils, spray paint and a ladder, painting figures of angels on plywood.

“Property represents livelihood, food on the table,” he said. “I want to create a visual. I mean, this is post traumatic stress we’re going to have to deal with here.”

Scott Carpenter is trying to push ahead. He runs the family-owned B&L Office Furniture at 1101 60th St.

After Blake’s shooting and the initial protests, he remained hopeful that peace could hold.

“I didn’t think we were going to be a Chicago or a Portland, Oregon,” he said.

Then he saw a car dealership catch fire.

On Monday night, he watched a feed on Facebook and saw his business burned.

He’s had a few days to absorb the loss and to prepare to move on.

“If I was trying to do peaceful protests to let my voice be heard, and this is in the wake of it, I think I’d be telling whoever was behind me, ‘Stop it, you’re ruining our cause.’ “

Friday, he was back at his business. The building is a total loss. The heat of the fire was so intense, steel beams began to twist.

This article originally appeared on Milwaukee Journal Sentinel: Jacob Blake shooting in Kenosha a time of reckoning on race, police

Your old cellphone may be worth more than you think. But you have to shop it around

Sun Aug 30 , 2020
Remember when your cellphone was brand new and you wanted to show it to everyone? That was a good day! Exciting! Thrilling! And now, however long later this is, you are hankering for an upgrade. The new phones do all sorts of amazing things yours can’t. They charge wirelessly, fold in half, […] 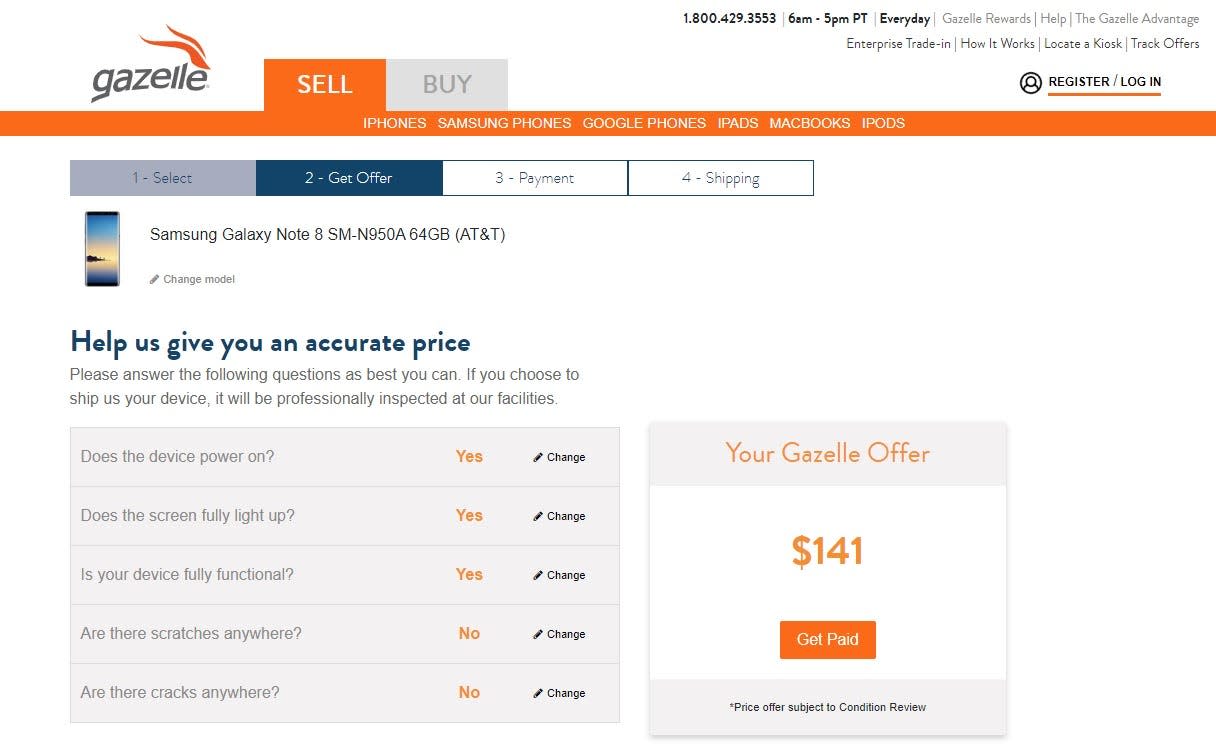