Click here to read the full article. “Today, we take a big step forward …to ensure equity and justice and fairness for every Angeleno by creating the Community Safety Partnership bureau in the Los Angeles Police Department,” said Los Angeles Mayor Eric Garcetti in a somber update on the metropolis’ […]

“Today, we take a big step forward …to ensure equity and justice and fairness for every Angeleno by creating the Community Safety Partnership bureau in the Los Angeles Police Department,” said Los Angeles Mayor Eric Garcetti in a somber update on the metropolis’ battle with the coronavirus, public safety and police reform.

“This new bureau makes CSP both a program and a philosophy,” Garcetti added in the evolving “co-ownership” plan to place police officers for up to five years in neighborhoods to “develop relationships with the people they serve …moving from a warrior mentality to a guardian mentality.”

“This complete embrace of policing built on relationships and the pursuit of long-term solutions rather than ongoing enforcement plans will serve as the foundation of the reimagined Los Angeles Police Department,” declared the LAPD in a press release that went out as Garcetti was speaking live on TV this evening about the previously public housing-set program moving from being a “core pillar of this department to part of the foundation.”

“As an organization, we are committed to further engaging in meaningful reflection about our prior missteps, but we are also eager to embrace changes that move us in a new direction – one that is defined by being a true reflection of the communities we serve and their dynamic needs,” the cop shop added in what Garcetti himself Monday said was an effort to establish trust with LA’s African American and Latino communities so they “feel and they are safer.”

Seeking to blunt presumed critiques that today’s announcement doesn’t go far enough, the ambitious Garcetti said “this is part of a wider strategy of reducing force through training, tactics and recruitment, changing cultures where we have to as well as looking beyond policing” to issue of inequity hitting communities of color.

With a polling sinking Donald Trump throwing all his reelection chips into a race baiting law and order strategy and stoking the fires of discontent by sending federal troops into cities like Portland, crime and the police are once again in the spotlight this summer after the Memorial Day killing of George Floyd by then Minneapolis cops.

Monday’s announcement also comes as tensions between law enforcement and local politicians flared up on the County front too. LA County Sheriff Alex Villanueva recently took to social media to slam Supervisor Hilda Solis in what she later termed “highly unprofessional, inappropriate, racist and sexist” language. Strained in no small part because the sheriff was tossed out of his role as the County’s head of emergency operations by the Board back in March, the already fraught relationship has opened a new Faultline after Villanueva attacked Solis with a Latino cultural slur for criticizing the actions of the police against people of color.

As protests against police brutality and systemic racism occurred across the nation following the filmed killing of Floyd, Garcetti declared back in early June that there would be a $100 to $150 million cut in the LAPD budget. After a 7% increase in the LAPD budget in April and now flowing into a larger $250 million cut from existing city agencies, the reallocated money would be intended for communities of color, “so we can invest in jobs, in education and healing,” the Mayor said.

Needless to say, and despite well documented criticisms of their response on the whole and specifically to the early June protests and curfews, the almost 10,000 sworn officers strong LAPD weren’t thrilled with the slice to their $1.8 billion annual budget. While making a point of holding his nose at the politics of the situation, a sometimes gaffe prone LAPD Chief Moore (no, not that Michael Moore) said “I remain steadfast in my belief that the continued funding of essential functions of our Department equates to public safety.”

Just days beforehand, Chief Moore had faced remote calls for his resignation at a live online feedback session held by the police commission. In words quickly taken back at a June 1 press conference with Garcetti, Moore lashed out looters who launched off the protests and proclaimed that Floyd’s “death is on their hands, as much as it is on those officers.”

At the time, Garcetti moved to quell things by emphasizing that a free styling Moore had misspoke. To add some gravity to the tricky civic situation the Mayor added that if he believed that Moore had meant what he said, then Moore “would no longer be chief of police.”

In late June, as it optimistically looked like the city may have flatten the coronavirus curve, LA’s Budget and Finance Committee voted overwhelming to trim the LAPD’s budget by $133 million. That’s well below what the Black Lives Matter backed People’s Budget sought and short of the $150 million that had looked possible weeks beforehand. On July 1, as Defund the Police efforts gain traction in various forms around the nation, the full LA City Council went further than the Budget and Finance Committee and approved a $150 million cut after all in a 12-2 vote. Councilmen Joe Buscaino and John Lee were the only ones to vote against the cut.

Earlier this month, the City Council asserted that approximately $40 million of the $150 million cut from the cops would go to hit the pause button on more city worker furloughs due to the economic havoc of COVID-19.

Overall, with a steep decline in revenues this year because of the health crisis that has hit American and the City of Angels hard, the LA City budget is for 2020-2021 is around $10.5 billion.

Of course, as he was joined by the likes of Councilmembers Buscaino (a former cop), Marqueece Harris-Dawson, Curren Price, and Monica Rodriguez, and LAPD Chief Moore police reform wasn’t the only topic the Mayor had on hand today.

“The fact is that COVID-19 is still in control,” Garcetti said at the beginning of today’s televised briefing. “This is a make or break week for COVID-19 in the county of Los Angeles, our public health conditions remain fragile, but the COVID threat level remains at Orange,” he added of the city’s metrics where Red would see another stay-at-home lockdown. “We are not closing any additional business or activities,” the media savvy mayor noted in a city and county that has seen coronavirus cases and deaths tragically seemingly break records almost every day

All the Movies Suspended or Delayed Due to Coronavirus Pandemic (Updating)

Tue Jul 28 , 2020
As coronavirus continues to spread, an increasing number of movies are delaying or suspending production. As the number of impacted movies grows, TheWrap felt it would be most informative to keep a running list. The CDC as of Thursday is reporting just over 10,400 cases in the U.S. alone, with 150 […] 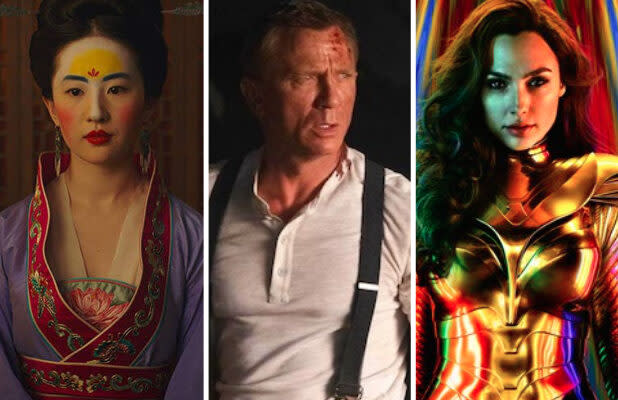