Taking attendance at Los Angeles schools amid online learning is more complicated — and a lot more liberal — than students simply responding “here” when their name is called.

In a policy that has raised flags among some teachers and principals, but appears to be permitted by state law, students in the nation’s second-largest school district have several relatively easy ways to be counted as present for a day of school:

“I have a problem with that,” said a teacher in reference to the log-in policy during a training session that The Times witnessed via Zoom.

Making sure that students attend class and keeping a record of that attendance are important and required tasks, state officials say.

“Ensuring that we are reaching and engaging every student is more critical than ever to ensure students already at greater risk of falling behind can stay connected to their learning,” said Daniel Thigpen, director of communications for the California Department of Education.

The key component of being marked as present is that daily engagement — in whatever form — must take place during the same school day before midnight. If at 12:01 a.m. a student has been silent in all ways, the student will be definitively absent.

The new practices, although not demanding of students, represent a return to formal attendance-taking. When schools closed in mid-March during the onset of the coronavirus emergency, state officials did away with requiring teachers to take attendance.

But both anecdotal reports and episodic tracking indicated that student engagement sagged — and also that some teachers provided limited learning opportunities.

Los Angeles Unified reported that 78% of middle school students logged in three times or more per week several weeks after schools closed. And an internal report  showed disparities in engagement along lines of race, ethnicity and family income — with students from low-income families and Black and Latino students participating in fewer learning activities than peers from higher-income families and white and Asian students.

With most California campuses closed for the start of the new school year, the state established rules that mandate daily live lessons, restored requirements for minimum instructional minutes and reinstated taking roll.

One principal complained in an interview with The Times that a superior told her that if a student logged in for one minute, that student was present for the day.

“Would that be fraud?” the principal wanted to know.

Another principal advised her teachers that she wanted them to consider the content of an email contact before accepting it for attendance. She expected the student or parent to explain why the student could not attend class — and the explanation or the excuses should not be considered evergreen. Teachers can’t allow students to be marked as present simply because they send an email every day claiming that they were unable to log in, she said.

The names of principals interviewed have been withheld because they were concerned about talking freely without permission from the school district. The principals do not have tenure protection in their assignments and they said they feared retaliation.

District officials were unwilling to discuss the topic — even though the L.A. County Office of Education, an oversight agency, could not identify any improper practices based on an explanation of the policies provided by The Times.

Given a week to confirm information about attendance-taking practices, which The Times gleaned from interviews and documents, the district refused to make anyone available to explain the content of the teacher trainings or the attendance policy and would not review information submitted for verification.

Instead, the school system supplied a brief statement. “Los Angeles Unified’s attendance practices are in compliance with SB98 and CDE guidelines” — referring to Senate Bill 98, which established teaching guidelines for the fall, and the state Department of Education.

The district reported that first-day-of-school attendance rates last week were 86% this year compared with 90% last year. Officials refused to provide attendance numbers for any additional days.

Taking attendance is important because districts must comply with compulsory education requirements, which also allows the state “to track things like chronic absenteeism,” said H.D. Palmer, spokesman for the state’s Department of Finance.

State rules mandate daily live interaction and suggest that it must be meaningful.

“All students are required to receive daily live interaction with both a certificated employee [like a teacher] and their peers for the purpose of instruction, progress monitoring and school connectedness,” according to guidelines from the Department of Education.

“Teachers may meet individually with students, but this alone does not meet the requirements for daily live interaction. The minimum standard should be the same for all students…,” the guidelines say. “Every effort should be taken to determine the amount of interaction that is needed for students to progress academically and remain engaged in learning and connected to the school community.”

Students who are absent for three days in a school week are supposed to receive special attention, according to the state. Principals interviewed by The Times insisted they would closely monitor a student’s need for counseling or other intervention regardless of what’s on the official roll sheet.

One teacher commented that she felt as if she needed to keep two sets of books to guide her instructional strategy — one for the official and, in her view, inflated tally of attendance and one that represented reality.

One quandary leads to another.

“How do I tally tardies?” one teacher asked in a training. The principal had no ready answer.

One principal noted that past district policy suggested that students should not be penalized for failing to turn in homework because conditions at home could be hindering a student. Yet now all work must be completed at home.

Teachers must turn in their roll by 3 p.m. every school day. But student contact can still happen after that — as long as it’s before midnight. Teachers then have four days to update their roll, changing an absent to a present.

If a counselor calls and reaches an absent student rather than a teacher, does that student get marked as present? a teacher asked in one session. The principal promised to return with more information.

Principals stressed that students who show up only briefly online might be officially present, but they wouldn’t learn the material needed to pass a class.

families of US Covid victims forced to crowdfund funerals 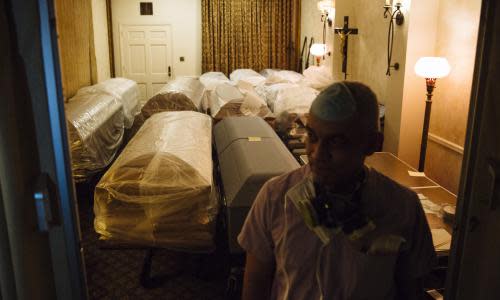