Leilani Chaco was worried when the nonprofit that helped transform her daughter’s life was forced to go exclusively online earlier this year. Since the age of 18 months, Emilia — or Emi for short — had been attending classes and receiving therapy almost every day through Kindering, which specializes in […]

Leilani Chaco was worried when the nonprofit that helped transform her daughter’s life was forced to go exclusively online earlier this year.

Since the age of 18 months, Emilia — or Emi for short — had been attending classes and receiving therapy almost every day through Kindering, which specializes in services for children with special needs.

And it was working.

Before the pandemic shutdowns, Emi, who has autism spectrum disorder, experienced an exhilarating burst of progress. At 3 years old, she was learning new words, eating new foods and overcoming some of her fears.

“To be honest, I was really nervous she would regress,” Chaco said. “I was scared we wouldn’t be able to make any impact with virtual services — but I was very wrong.

“The team at Kindering really pulled out all the stops. They did everything they could to remain supportive.”

Each year, The Seattle Times Fund For The Needy raises money for 12 charities that help children, families and senior citizens. Throughout the season, we’re telling the stories of people and organizations who make a difference in the lives of thousands, and the impact donors can have.

▪︎ Make a tax-deductible donation to the Fund For The Needy

The transition wasn’t easy for such a hands-on type of operation, where hugs are the quintessential currency of communication and kids learn vital skills by playing together. But Kindering was able to pivot quickly, drawing on its experience working online with families that were traveling or otherwise unable to meet in person and during the 2019 “Snowpocalypse” storms that left roads impassable, said Lisa Greenwald, CEO of the agency, which is one of several that benefit from The Seattle Times’ Fund For The Needy.

Since March, the nonprofit’s staff has conducted more than 32,000 teletherapy sessions with infants, toddlers and their caregivers. If households didn’t have computers or internet service, Kindering provided Wi-Fi enabled tablets.

As a growing number of families found themselves unable to pay rent, the organization ramped up services for children facing homelessness. To fill the gap created when classrooms closed, Kindering launched a virtual playroom with more than 50 monthly sessions in English and Spanish.

No one knew if any of it would work, but the data so far suggest that most children are doing just as well as with in-person services, Greenwald said.

“That’s what’s really exciting to us.”

One key to that success has been enlisting parents to play even more active roles in their children’s therapy, said Lexi Baasch, an occupational therapist at Kindering.

“I feel like I’m able to empower parents more since we went virtual,” she said. “It’s cool, because I’m able to teach them to do exactly what I do.”

On a rainy afternoon last week, Emi and her mother tuned in for an online session with Baasch. The therapist has been working with Emi for more than a year, helping the little girl become more proficient at things like dressing herself, using the potty and understanding and communicating her feelings.

One of the goals on this day was to work on fine motor skills — things like holding a crayon and drawing small circles and straight lines — which can be challenging for kids with autism. But Emi was wound up, bouncing around the room in her pink boots and yellow slicker, ponytail flying.

Baasch suggested she get the “wiggles out,” by dancing and singing along to a tune about falling rain. Finally, they got down to business in the guise of a playful drawing exercise and more singing. When Emi got frustrated trying to write an “E,” Baasch broke the task down to simply making vertical and horizontal lines, which she called “zips and zooms.”

Throughout the session, Baasch and Chaco chatted, the therapist offering tips and observations, the mom interpreting Emi’s moods and discussing ways to make the exercises more fun for her.

When Chaco and her fiancé, both 32, learned their daughter might have autism, they were stunned and in denial. But it also made sense.

Emi had always been a very particular child, Chaco said. She picked up several words, but then seemed to lose her verbal skills. She started getting stuck in repetitive loops, like filling a cup in the bath and pouring it out over and over again. When it was time to leave a park, or shift from one activity to another, she’d fling herself to the floor, kicking and screaming.

“We really felt defeated for a while,” Chaco said. “We didn’t know how to comfort her, and at that point, she wasn’t able to communicate with us.”

After a single visit to Kindering, the organization enveloped the family in a supportive network.

“I was blown away by how quickly they swooped in with so many different things to offer us,” Chaco said.

There was speech therapy, dietitian services, behavioral counselors who made house calls, and classes where the little girl who was afraid to eat anything but milk, rice and bread could watch other kids munching on cucumbers, carrots and apple slices — and occasionally follow their lead.

“We were going to Kindering five days a week at one point, and having people coming over all the time,” Chaco said. “It was a full-time gig.”

It was so all-consuming that Chaco sold her business making dip and seasoning mixes for sale at farmers markets, so she could focus her energy on taking care of Emi.

Fund for the needy

What your donation can do

$50: buys therapy balls to loan to families for home therapy.

She was especially grateful for the way Kindering supports parents with programs to help them cope with the stress inherent in having a special-needs child.

“I feel like they’re not just Emi’s therapists,” Chaco said. “As a family, they have been there for us, to support us, through the entire autism journey.”

Kindering serves children with disabilities ranging from Down syndrome and cerebral palsy to those with vision and hearing problems and a wide range of cognitive and developmental delays. They emphasize the first three years of life, a time when the brain is flexible and developing rapidly, Greenwald said.

“The earlier you intervene the better. That’s when you can make such a long-lasting impact.”

The agency annually reaches 6,500 children and their families, who speak more than 60 different languages. More than half of kids who complete Kindering’s programs don’t require special education when they enter school, which saves East King County districts more than $18 million a year.

Funding comes from federal and state agencies, insurance payments, donations and small fees, but no one is turned away if they can’t pay. The pandemic took a bite out of the budget, including a 30% drop in insurance reimbursements and greater demand for free services, Greenwald said.

The number of new kids joining programs also fell, in parallel with a decline in visits to primary care doctors who often make the referrals. Greenwald estimates it will take a year to make up lost ground in terms of money and enrollment.

But Kindering has already started easing back into limited in-person sessions — with appropriate safeguards — for kids who need close observation by therapists or services like wheelchair fittings.

For Emi, the predictable, stay-at-home schedule imposed by the pandemic has been beneficial, Chaco said. She loves her online therapy sessions and continues to make progress.

She’s speaking in complete sentences, rarely has meltdowns anymore, and is able to let her parents know when she’s sad, angry or frustrated. She no longer panics at the sight of strange foods and has become more open to new experiences — as long as she doesn’t feel pressured.

“It’s been life-altering for everyone,” Chaco said. “She went from being stressed out so often to being more of who I think she really is, which is just a joyous, happy child.”

A recent, small victory came during a visit to a park. Emi’s dad gingerly took her down the slide for the first time, not knowing how she would react.

She loved it and immediately scrambled back up to do it again — on her own.

Yes, You Can Spend Your Bitcoin This Black Friday

Thu Nov 26 , 2020
Get ready to spend some bitcoin – and not just because of the great Black Friday deals.  This year, shoppers can spend or earn bitcoin on discounted deals from all over the world: the Bitcoin Black Friday event is back with over 300 merchants and nonprofits, more than 330 deals, […] 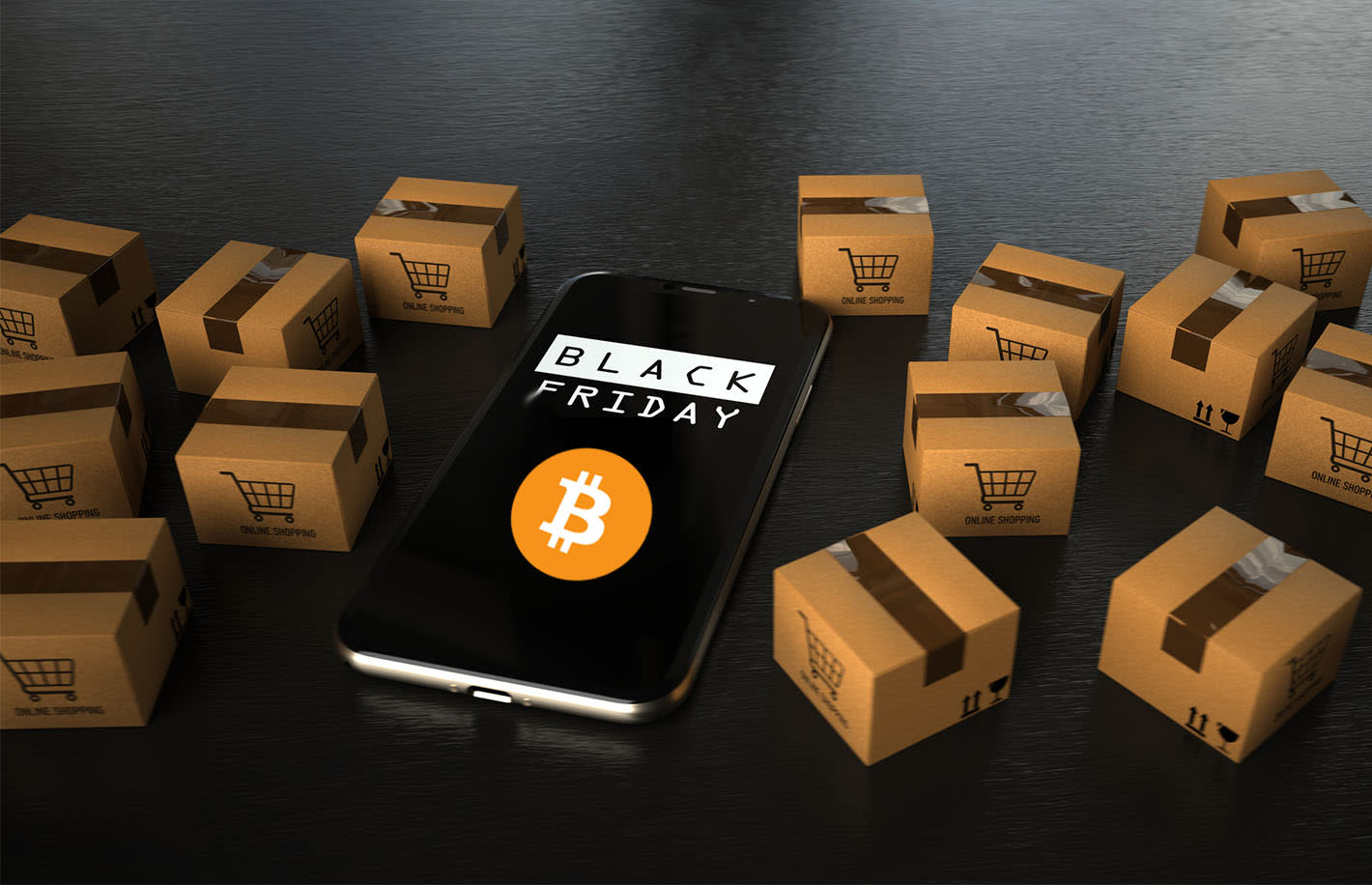