First, the University of North Carolina. Now, North Carolina State University. A day after university officials in Chapel Hill decided to pivot to online classes after at least four clusters of outbreaks of COVID-19 in student living spaces, the Raleigh university reported its first cluster of positive cases that included some of […]

A day after university officials in Chapel Hill decided to pivot to online classes after at least four clusters of outbreaks of COVID-19 in student living spaces, the Raleigh university reported its first cluster of positive cases that included some of its own students.

Also Tuesday, the University of Notre Dame said it was moving to online classes for two weeks in hopes that infections won’t surge.

Meanwhile, a new survey shows that parents with children who have switched to online learning say they have gone into debt paying for all of the at-home school expenses, including breakfast and lunch, during the pandemic.

📈 Today’s numbers: The U.S. has 5.4 million confirmed infections and more than 171,000 deaths. Worldwide, there have been more than 781,000 deaths and 22.1 million cases, according to John Hopkins University data.

📰 What we’re reading: Wearing a mask in public restrooms should be mandatory during the pandemic, researchers say, because there’s increasing evidence that flushing toilets – and now urinals – can release inhalable coronavirus particles into the air.

At least two dozen Maine residents tested positive for the coronavirus after a wedding reception in rural Maine — the state’s first outbreak linked to a social gathering,

All told, about 65 people attended the indoor event at the Big Moose Inn in Millinocket, said Maine CDC spokesman Robert Long. About 18 people in attendance — and around 10 others who came into contact with attendees —  all tested positive, according to WABI-TV in Bangor, Maine.

The owner could face a $10,000 fine if the state’s executive orders limiting group gatherings to 50 were violated, officials said.

During pandemic, are little kids OK? Survey shows COVID-19 is taking a toll

During the pandemic, people are talking a lot about children missing classes, graduations and proms. What has received far less attention, child development experts say, is the impact the pandemic is having on the youngest children: babies, toddlers, preschoolers, kindergartners.

Birth to age five is a critical time for child development, research shows, and new data from the Rapid Assessment of Pandemic Impact on Development Early Childhood Household Survey Project (RAPID-EC Project) shows caregiver distress is cascading down to young children in ways science shows can be toxic in the short- and long-term.

The project has been conducting weekly surveys since April and has found caregivers of young children are experiencing distress, material hardship and loss of emotional supports. Since the project’s data is sequential, it also is able to show a chain reaction. When a family is stressed about meeting basic needs, the next week they report more emotional distress, and the week after report increases in their child’s emotional distress.

“if you can’t buy food or you can’t pay your rent, that you are experiencing the kind of stress that is going to be toxic to your children,” said RAPID project director Phil Fisher.

Report: Nearly 80 teachers resign or retire in one Utah county

Nearly 80 teachers in Utah’s Salt Lake County have resigned or retired as in-person classes are set to resume at schools this year, the Salt Late Tribune reported.

The Tribune tallied 79 teachers who left their posts due to concerns about COVID-19. At least 16 of the resignations came in the last week, the newspaper reported.

Salt Lake County has the highest number of virus cases in the state, and teachers leaving the classroom told the newspaper that they’d rather resign or retire now than return in the fall, risking their own health or the health of their students.

“We’re just being told to jump in like nothing is wrong,” Jan Roberts, a teacher of 32 years who just retired, told the Tribune. “It’s not OK.”

While the roll call was a formality, it occurred in unprecedented fashion as the COVID-19 pandemic continues to keep many Americans at home and away from large crowds. The pandemic has also dramatically shaped how the general election campaign plays out.

When the roll call was completed, applause erupted, showing Democratic supporters across the nation on video clapping as Biden, seated in a library with his wife, Jill Biden, were greeted by mask-wearing supporters throwing confetti.

Health officials have identified a COVID-19 cluster at another North Carolina university.

The school said several people who have tested positive as part of this cluster have been identified, including some who are N.C. State students. Contact tracing has been initiated with direct communication to anyone known to have been in close contact with a person who has tested positive for COVID-19, according to the school.

The school said reports indicated a party or some type of gathering was hosted at the location on or around Aug. 6. The notice said it was not known how many people were at the gathering, but encouraged anyone who attended to visit their personal healthcare provider or Student Health Services.

Switching from in-person to online schooling has been hard on many families – and on their budgets.

About one-quarter of parents say they’ve gone into debt to pay for their kids’ at-home school expenses, and many blame the cost of their kids’ breakfasts and lunches when they switched to learning remotely from home.

A survey from Credit Karma examines how this school year could affect household finances. More than half of parents say they expect to spend slightly to significantly more on school supplies, the survey of more than 1,000 parents found.

The reasons for the debt are higher grocery prices and the sudden switch to at-home schooling in March.

Both contact and non-contact sports will be permitted to move forward, but they could look quite different. Spectators will be limited to a small number of people close to the athletes, marching band members or other participants.

Local health department and Ohio High School Athletic Association officials will have site inspectors at athletic events to ensure social distancing and other health regulations are followed. Teams and leagues can delay sports to the spring.

Students won’t need to be tested to participate in sports. DeWine said he anticipated most high schools wouldn’t have the resources to regularly test their athletes.

“It’s not going to be your typical Friday night football in Ohio,” DeWine said. “But the young people are going to get to play.

Hawaii Gov. David Ige has hinted about it for weeks as COVID-19 cases in the state surged, and on Tuesday he made it official: The state won’t reopen to tourism until October at the earliest.

The planned Sept. 1 start of a program that would allow out-of-state visitors to bypass Hawaii’s strict 14-day quarantine upon arrival by presenting a negative COVID-19 test at the airport has been delayed until at least Oct. 1, Ige said late Tuesday.

“We will continue to monitor the conditions here in Hawaii as well as key markets on the mainland to determine the appropriate start date for the pre-travel (COVID-19) testing program,” he said.

The delay, the second since the program was announced in June, will affect passengers who bet on the Sept. 1 reopening and bought airline tickets to Hawaii, airline flight schedules and, of course, Hawaii’s decimated tourism industry.

Australia has announced a deal to manufacture a potential coronavirus vaccine being developed by British-Swedish pharmaceutical company AstraZeneca.

“Under the deal, every single Australian will be able to receive the University of Oxford COVID-19 vaccine for free, should trials prove successful, safe and effective,” Prime Minister Scott Morrison said in a statement Wednesday.

Morrison said the Oxford University trial was in a phase-three stage and more work was needed to prove its viability. “If this vaccine proves successful, we will manufacture and supply vaccines straight away under our own steam and make it free for 25 million Australians,” Morrison said.

Anderson Cooper tore into My Pillow founder Mike Lindell for touting an unproven drug as a potential “cure” for COVID-19, calling the prominent supporter of President Donald Trump a “snake oil salesman” in a CNN interview.

Lindell has been advocating for the use of oleandrin, an extract from the oleander plant, as a treatment for the coronavirus. Lindell helped Andrew Whitney of Phoenix Biotechnology land an Oval Office meeting in July where they pitched the drug to Trump, according to reports from The Washington Post, CNN and Axios. Housing and Urban Development Secretary Ben Carson also attended the meeting, Axios reported.

“This thing works. It’s the miracle of all time,” Lindell told Cooper. After his inability to give specifics on where and when the drug was studied, Lindell told Cooper, “You’re just misconstrued because the media is trying to take away this amazing cure that works for everybody.”

“You have no medical background, you’re not a scientist,” Cooper said. “A guy called you in April, said he had this product. You are now on the board and going to make money from the sale of this product. The reason he reached out to you is because you have the ear of the president, so he gets a meeting with the president, and you stand to make money from this. How do you sleep at night?” Cooper asked.

Will you get a refund if COVID-19 closes your campus?

Wed Aug 19 , 2020
Many colleges are welcoming students back for in-person learning and dormitory living this fall semester. Looming over everything: Campuses could shut back down at any time. — Plan how you’d use a refund. If your school offers a direct refund, consider whether you’ll need that money for living expenses. If […] 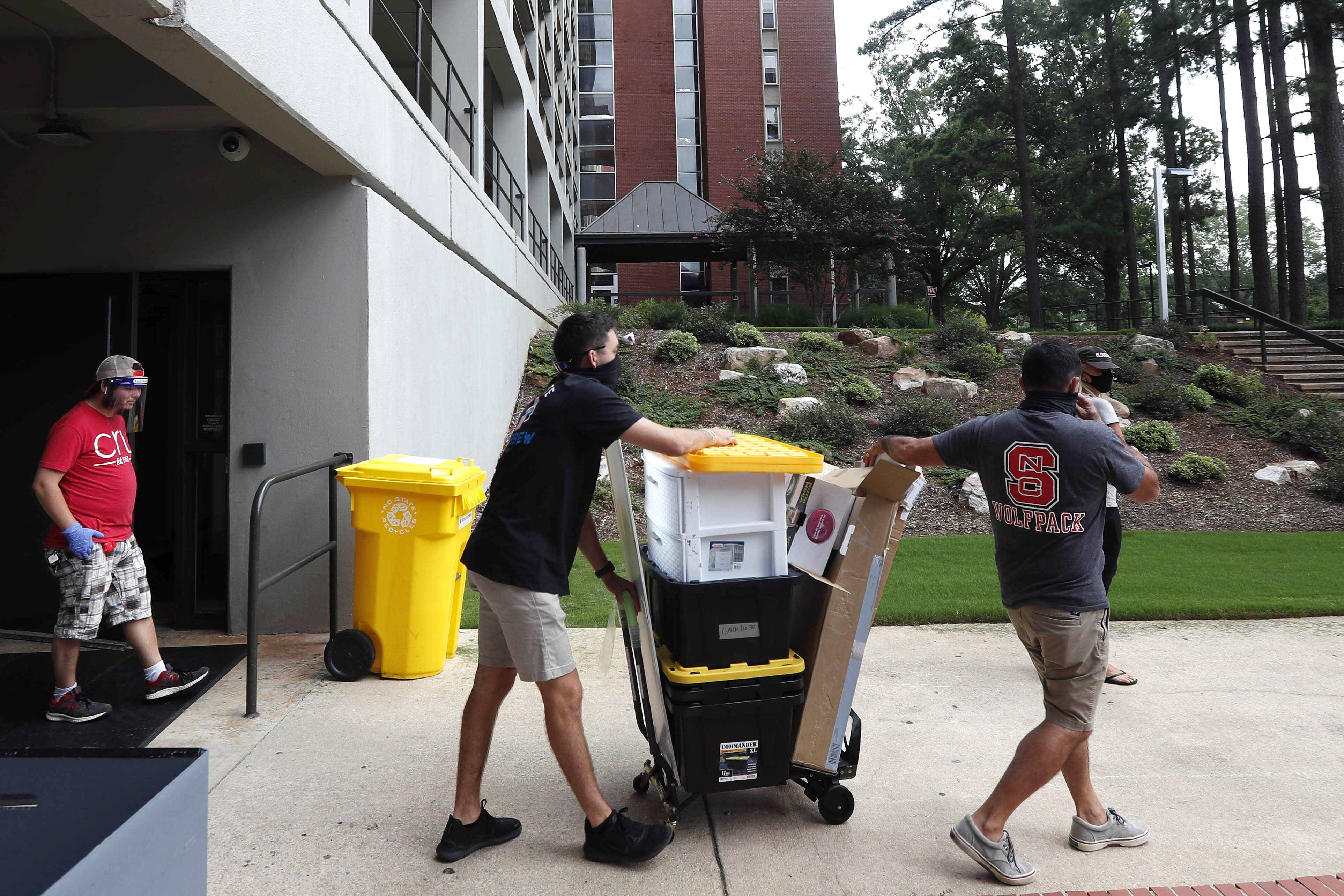