WASHINGTON ― As Senate Republicans try to advance a coronavirus relief bill with only $200 a week in extra unemployment benefits ― down from the expiring $600 ― many House Republicans are signaling that they’re opposed to any extra money at all. “Zero is the number for me,” Rep. Roger Williams […]

WASHINGTON ― As Senate Republicans try to advance a coronavirus relief bill with only $200 a week in extra unemployment benefits ― down from the expiring $600 ― many House Republicans are signaling that they’re opposed to any extra money at all.

“Zero is the number for me,” Rep. Roger Williams (R-Texas) told HuffPost on Wednesday.

Rep. Austin Scott (R-Ga.) claimed the majority of people thought it was a good idea to not have any “bonus unemployment” (polls show completely the opposite).

Rep. Steven Palazzo (R-Miss.) said it should be left up to each state’s governor, meaning the federal government shouldn’t be handing out extra money. And Rep. Ralph Norman (R-S.C.) said he would prefer a payroll tax cut over added unemployment benefits, though he also said he wouldn’t vote for a $1 trillion bill like Senate Republicans were offering ― let alone a $3 trillion bill like the one House Democrats passed in May.

The Republicans pressed their case against giving jobless people any extra money amid the continuing global pandemic and its ripple effects of an unemployment rate that remains over 11% and a U.S. economy that declined by 32% in the second quarter ― the largest drop. They see the aid as an incentive for many to stay unemployed.

“I’m not sure that we should be adding to a state’s unemployment,” said Rep. Andy Biggs (R-Ariz.) head of the Freedom Caucus whose members consist of the House GOP’s most conservative members.

When HuffPost asked if his comment might zero was the right number in the debate over extending the additional jobless aide, he said, “It may be.”

“They’re getting all kinds of additional benefits, including ― there was direct payments, everything else,” Biggs said, referring to the one-time check of up to $1,200 that individuals received in the spring. “So I’m saying, what they’re doing now is they’re providing disincentives to go back to work.”

Biggs wouldn’t rule out voting on a bill that included some benefits ― “There are some things I might consider going with that” ― but he added his ideal number was zero.

It’s unlikely any bill offered by the Democrats who control the House could satisfy Republicans like Biggs. And that may be the ultimate irony of the GOP’s hardline approach.

Senate Majority Leader Mitch McConnell (R-Ky.) faces a mutiny among his ranks, as roughly half of the Senate GOP majority seems opposed to even a skimpy stimulus measure. So if there’s going to be a bill that makes it to President Donald Trump’s desk, it’s probably going to take mostly Democratic votes to get it there, both in the Senate and the House.

Trump has actually signaled that he’d like to increase the unemployment benefits, saying on Wednesday that “the payments aren’t enough.” But many congressional Republicans, based on their recent comments, seem to have just woken up to the fact that, under Trump, they’ve added more than $6 trillion to the government’s debt.

But if Woodall and the other House Republicans have suddenly refocused their attention on the debt, it might take them out of the current political equation ― meaning a deal on a new relief bill would likely need to hew closer to what Democrats want and, paradoxically, cost even more money.

As the debate unfolds, some Republicans in both chambers have suggested not providing a specific figure for extra unemployment payments. Instead, they have said they’d like to cap what an unemployed individual can receive at, say, 70% of their former income, as the Senate bill would eventually do.

Such a calculation, however, could be difficult for states to make. It took some states months to even handle the sudden influx of unemployment claims.

“They had a difficult time in Arizona even doing what we gave them,” Rep. Debbie Lesko (R-Ariz.) acknowledged Wednesday. She added that she was “sympathetic” to state officials that have said they would have trouble figuring out some percentage of a person’s previous income to then provide extra aid in a timely manner.

Republicans dismissed the notion that many people may not want to go back to work because of concerns about being infected by the coronavirus. Instead, for them, they dwelled on their argument that the extra unemployment aid is an incentive for people to remain out of the workforce.

“In fact, they admit it,” Rep. Andy Barr (R-Ky.) said. Offering anecdotal evidence to support his point, he referred to a restaurant owner in his district who he said couldn’t get employees to come back because they were making more on unemployment.

Williams said, an employer as the owner of car dealerships, said he knew the extra money was “really hurting our ability to get back to work.”

“The economy is good,” Williams said. “You know, with low interest, low taxes, and cash in the system, the economy’s pretty good,” and getting people back to work will accelerate those positive trends, he added.

Williams himself has been the beneficiary of coronavirus-related government aid, receiving money through the Paycheck Protection Program designed to help small businesses stay afloat and keep employees on their payrolls.

Rep. James Comer (R-Ky.) also relied on anecdotal evidence to argue against the extra unemployment benefits, saying businesses he had heard from over the last three months have all complained that they have to “compete against this federal unemployment insurance.”

Comer said it’s essential that the government reduce the benefit to force people back to work. “Absolutely not,” he said of continuing the extra $600 payment, adding, ”$400, absolutely not.”

He did indicate some willingness to come off the “zero” aid stance so many of his GOP colleagues have embraced, saying, “I would rather not do $200, but I want to govern.”

The extra unemployment benefits are just one sticking point in the massive bill McConnell unveiled earlier this week.

And the two parties are diametrically opposed on liability protections ― Republicans want to make sure that businesses that reopen can’t be sued by workers who then contract COVID-19, while Democrats say they won’t support that.

But the additional unemployment benefits seem to be the most personal and ideological disagreement. Republicans fundamentally believe the aid undercuts the push to repair the economy and get people back to work, while Democrats think the GOP position will financially cut people off at the knees and potentially make the pandemic worse.

“This should be about doing whatever is necessary,” Rep. Jim McGovern (D-Mass.) told HuffPost on Wednesday. “Arbitrary numbers and cutoffs, you know, is ridiculous. This is about people’s lives.”

McGovern noted that the Senate GOP’s bill included extra money for military equipment like F-35s and a new FBI building in downtown Washington.

Rep. Alexandria Ocasio-Cortez (D-N.Y.) may have had the sternest rebuke, saying McConnell doesn’t care about “his own damn constituents” and “couldn’t care less about the working people in Kentucky.”

Ocasio-Cortez asserted that said GOP lawmakers wouldn’t “realize how bad the situation is until it impacts them.”

“COVID was a hoax until it was your loved one who passed away. Gay marriage is terrible until it’s your brother or sister that has come out,” she said of Republicans.

Thu Jul 30 , 2020
Silicon Valley giants Apple, Amazon and Facebook enjoyed a dramatic boom during the worst months of the coronavirus pandemic, posting rises in quarterly profits last night that will add fuel to claims they are becoming too dominant. Shares in the companies jumped in after-hours trading last night as they revealed […] 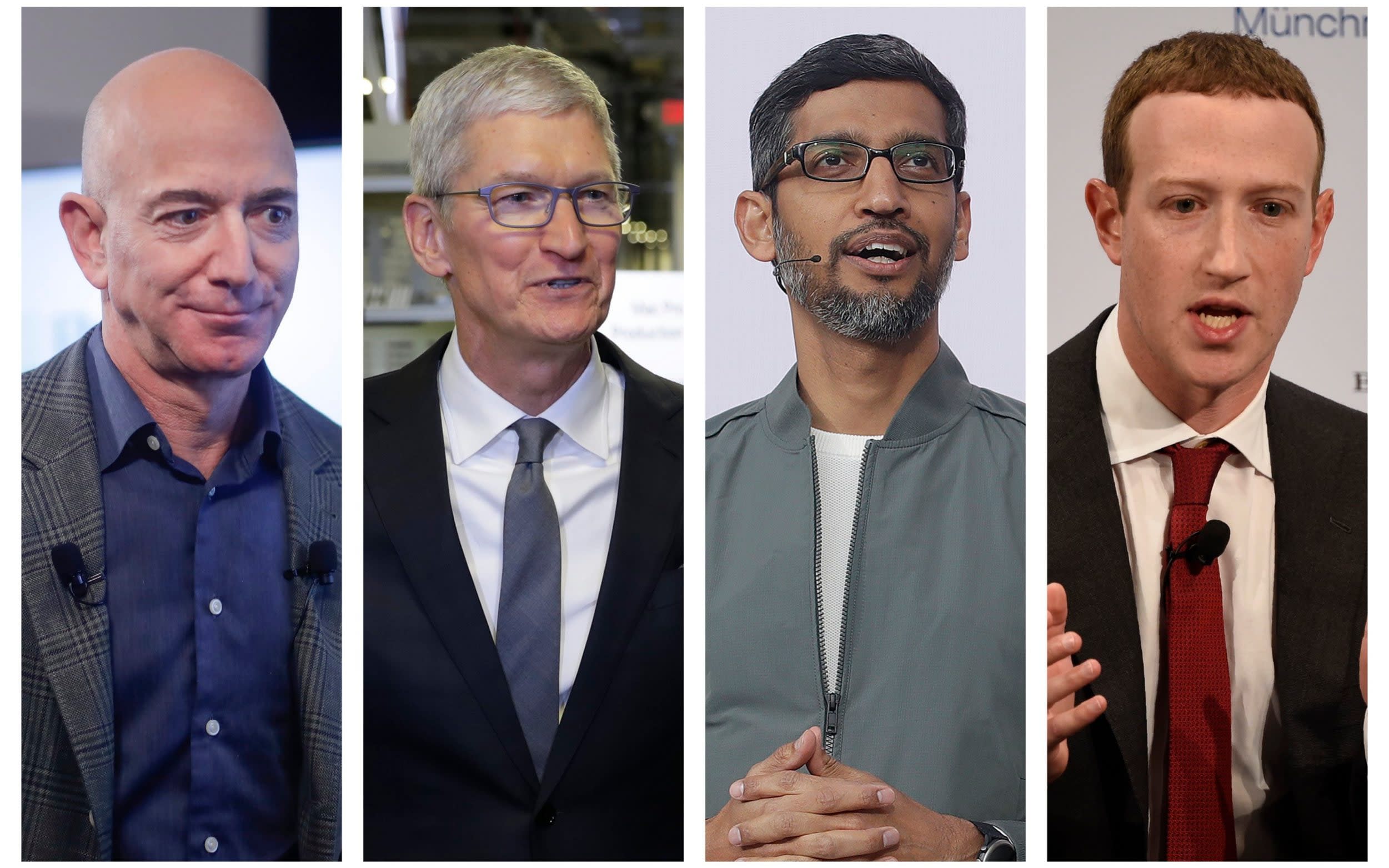