A generation of young adults who came of age during the Great Recession — in what was then the worst economy and job market since the Depression — are now finding that their wobbly recession-era start is compounding the financial woes the pandemic is inflicting. Credit counselors say there has […]

A generation of young adults who came of age during the Great Recession — in what was then the worst economy and job market since the Depression — are now finding that their wobbly recession-era start is compounding the financial woes the pandemic is inflicting.

Credit counselors say there has been a perfect storm of stagnant wages, soaring student debt and — because of those hindrances — a lack of wealth-building through home equity and stock market investment that previous generations were able to achieve.

“The combination of two recessions and a student loan crisis make it really hard to make ends meet in America,” said Rohan Pavuluri, who in 2016 co-founded Upsolve, a nonprofit, app-based platform that helps people who can’t afford the legal fees file for bankruptcy.

Since mid-March, Pavuluri said that 40 percent of the people citing job loss as the reason for a bankruptcy filing say the pandemic was the tipping point — and the average age of his users is 39. “All the millennials we help have less than $10,000 in assets,” Pavuluri said. For the most part, “They’re renting their homes, and they’re living paycheck to paycheck.”

The fractured nature of the economy into which younger adults entered the workforce has had a multiplier effect on their inability to gain financial traction. “If they’ve been in the gig economy and have been working in the gig economy, it can be much harder,” said Gigi Hyland, executive director of the National Credit Union Foundation.

A lack of benefits like health insurance and retirement savings compound the often-erratic earnings that make it incredibly difficult to build up an emergency fund. “The gig economy lacks a social safety net,” Pavuluri said.

Farita Toney, a property manager in Oakland, California, is one of these Americans. Her part-time gig doing online back-end office management — a side hustle she has been nurturing for six years now — has dwindled as businesses have gone into financial lockdown.

“I had at least one client say she had to cease services,” Toney said, and she worries about the fallout if more see her services as an expendable expense. “I’ve been able to float above water but if someone says, ‘Hey, I can’t do this anymore,’ or if I were to lose my job, I don’t know what I’d do.”

This setback is a frustrating reminder of the hardships Toney faced a decade ago. “No one anticipated this. If anything, it’s been more stressful trying to figure out how to rise above this and not get discouraged,” she said.

Toney was in school pursuing a bachelor’s degree when she was laid off in 2010. “I really needed that job. It was my first real job, to begin with. First, they cut my hours from full to part-time, then I just remember being told that they couldn’t keep my position open,” she said.

Toney, now 35, said she underestimated how hard it would be to bounce back.

“I had a very low point where my car had gotten repossessed. That was a wake-up call for me. I never want to experience this feeling again,” she said. “I realized I had to get focused.” She credits enrollment in a financial education conference for young women with introducing her to San Francisco-area Patelco Credit Union.

There, Toney learned how to build her credit and keep track of her money by creating a budget, but it wasn’t always easy. “I ended up getting a security job and I had to work seven days a week… and I was like, I have to get out of this,” she said.

As of 2018, the Pew Research Center (which defines millennials as those born between 1981 and 1996) found that members of this age cohort were slower to strike out on their own. The recession delayed household-formation milestones such as buying a home, getting married and having kids — and consumer credit experts say they see echoes of that failure to launch reflected in the struggles millennials now face today.

“All those decisions could be delayed by virtue of the debt carried from what happened in 2008 and 2009,” Hyland said. “There’s sort of this ripple effect that can potentially be seen today in the struggle to save and build assets, and put money in assets that can weather the ups and downs,” such as stocks, mutual funds or real estate.

James Gray, a financial services specialist at credit counseling agency Apprisen, said what he sees in his line of work makes it clear that many millennials, like Toney, never recovered from the early disadvantages they faced — leaving them uniquely vulnerable today. “Because they weren’t able to ramp up, they don’t have those resources in place to weather the storm the way you hope they would,” he said. “You find that the clients are in a crisis point more quickly.”

Pew also found that millennials were better educated, with nearly 40 percent earning bachelors’ degrees, but that educational attainment proved to be a double-edged sword when many young adults found themselves graduating into a recession-weakened economy with an unprecedented level of student loan debt — and eroded income growth potential.

“A lot of those folks I see aren’t in high-earning jobs. They’re leaving school with a ton of debt, but they’re in a job where they’re not making a lot of money,” Gray said. “In terms of real wages, there’s been such a stagnation of that for the middle class and lower over the past decade.”

Toney has experienced this frustration firsthand: She graduated in 2011 with a bachelor’s degree and, according to her estimate, around $50,000 in student loans — debt she admits she doesn’t know if she’ll ever repay entirely.

“Honestly, it’s really like an idea. I don’t know how long it’s really going to take to pay that off. I’m making payments on it, but the financial constraints have had a toll,” she said. At one point, she had to take a sharp pay cut when she switched jobs and put the loans in forbearance — a period during which interest continued to accrue, chipping away at the progress she had made paying that debt down.

For millennials, saving for the future is both a pressing concern and a distant goal — and unlike their parents, many aren’t relying on Social Security. According to the Transamerica Center for Retirement Studies, four out of five millennials worry that it will no longer be available when they retire.

Unfortunately, their skepticism that this flagship safety net program might not be there for them isn’t entirely unfounded: A new study from the Wharton School at the University of Pennsylvania found that the huge economic blow dealt by the pandemic will shave four years off the date by which the Social Security trust fund is projected to be depleted, dropping that date from 2036 to 2032.

Toney said she is proud of the progress she has made: She is down to a single credit card with just a few hundred dollars of outstanding debt remaining. But sometimes, she said, it seems like she’s right back where she started. “What’s similar back then and now is I still have the debt. I’ve grown wiser in my thinking, but my financial circumstances have not been able to surpass a certain level,” she said.

One main goal is to save enough money to buy a home or a condo, but with rising property values in the San Francisco Bay Area, she isn’t sure when, or if, that day will ever come. “I’m not giving up on my capabilities despite any financial hardship,” she said. “What I’ve been telling myself is to focus on what I can control.”

How much does your boss need to know about you?

Tue Jun 30 , 2020
As more people start to return to their workplaces, many employers are introducing new ways to check up on their staff, from thermal scanners to wristbands. For workers at any of Ford’s sites worldwide, there are two new steps to the morning routine. First, answer three health questions, on your […] 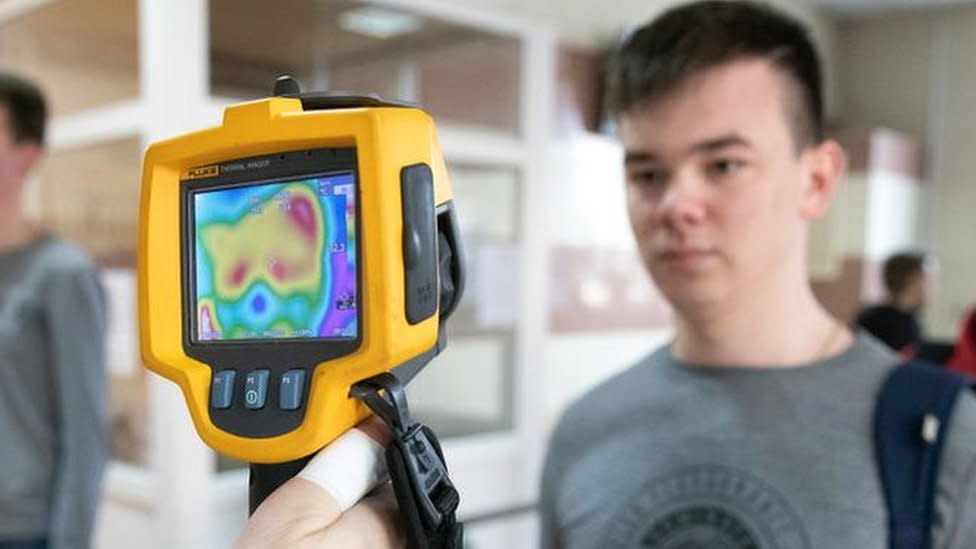