Misty Copeland became the first Black principal dancer for American Ballet Theatre in 2015, and through her professional career that has spanned two decades, she’s been fighting for change. “Initially, I got into ballet because it’s a silent art form,” she said on Yahoo Finance’s Influencers with Andy Serwer. “I […]

Misty Copeland became the first Black principal dancer for American Ballet Theatre in 2015, and through her professional career that has spanned two decades, she’s been fighting for change. “Initially, I got into ballet because it’s a silent art form,” she said on Yahoo Finance’s Influencers with Andy Serwer. “I didn’t want to speak, I wanted to express myself through movement.” The first decade of her career, she was the only Black woman in American Ballet Theatre, and she described feeling a sense of panic where she questioned if she was ever going to see another Black woman in her company or in her lifetime, even.

This realization prompted Copeland to start using her voice when it came to the racial insensitivity and inequality in the ballet world, with the hopes that she could make change for generations to come. “Black ballet dancers, our histories are so often just erased and lost, and that’s also one of my missions: to tell so many of those stories,” she said, adding later on that she aims to do this by highlighting Black and brown artists through Life in Motion Productions, a multimedia company promoting diversity in dance that she founded.

Copeland, 37, said she finally feels like she’s being heard during this time, crediting the racial-justice protests across the globe that have made people listen. “This has been my life’s work as a dancer, speaking about racism in the world and in ballet, speaking about the lack of diversity,” she stated.

Related: If You’re Struggling to Find Your Power, Misty Copeland Has an Inspiring Message For You

What’s different about using her voice today, Copeland said, is she feels “we have true allies in people from other communities and races that we have not had before.” She wants to take this opportunity to address the fact that the ballet industry has gotten away with racism in the past – and has done so “easily.”

Racism in the ballet world, she said, is something she tries to speak about in “the most respectful [way] I can because I know the deep rooted traditions and history in classical dance.” However, Copeland continued, “especially it being a European art form . . . the fact that we still perform those ballets that were created in that time in Europe to this day also just says a lot about where we are in the ballet world when it comes to racism.”

“If you want to keep the art form alive and relevant and growing, you’re gonna have to open your doors to everyone.”

Copeland thinks that the ballet industry is “extremely behind.” For example, blackface is still used in performances today. There are ballet companies in other countries, like the Bolshoi Ballet in Russia, that justify the use of blackface because “their reasoning is that’s not their history, so it doesn’t have the same meaning to them,” she said. Copeland added that being able to watch ballet online makes the use of blackface even more visible – and regardless, it isn’t OK.

“If you want to keep the art form alive and relevant and growing, you’re gonna have to open your doors to everyone,” Copeland said. “All I can do is point it out and say that these things need to change because you are neglecting an entire community, or hurting an entire community. Why would they want to pay for a ticket and come into the theater when they’re going to be disrespected on the stage?”

Copeland said that in her 20 years as a professional dancer, she’s been in a position of “representing people that are voiceless” not just because she’s Black, but also because she’s a woman and “because dancers are often not even given a voice. We’re told to shut up and dance.” She also said that in terms of ballet, a lot of people, especially in the Black community, “haven’t often felt like it was their world.”

But in the wake of the COVID-19 pandemic, performing arts have a chance to help change that by experimenting with different platforms. Having outdoor and digital performances, whatever that may look like moving forward, is one suggestion from Copeland. This would bring ballet to people – especially to those who might not have access to it – and she stated that now is the time to think of every solution to make that happen.

Fri Aug 7 , 2020
Amy Seimetz with fellow filmmaker Kris Rey (on phone) who is a close friend. Their new movies, Seimetz’s “She Dies Tomorrow” and Rey’s “I Used To Go Here,” are being released on digital platforms on the same day. (Myung J. Chun/Los Angeles Times) It’s always nice when friends go through […] 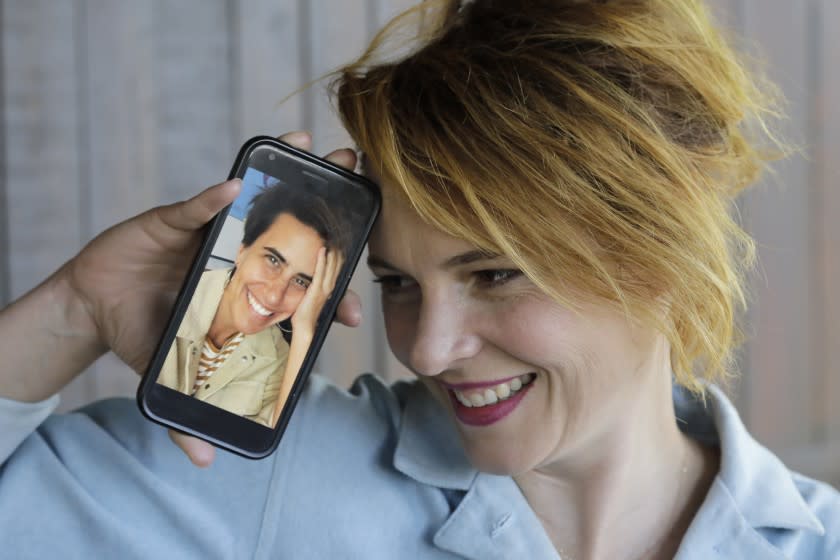