Supermarket chain Morrisons is to make thousands of temporary staff permanent as a surge in demand for online deliveries fuelled by the coronavirus pandemic continues. Iceland also says that it has taken on thousands of staff. Rivals such as Tesco are hiring more staff to support internet shopping after the […]

Supermarket chain Morrisons is to make thousands of temporary staff permanent as a surge in demand for online deliveries fuelled by the coronavirus pandemic continues.

Iceland also says that it has taken on thousands of staff.

Rivals such as Tesco are hiring more staff to support internet shopping after the lockdown accelerated the shift from visiting stores to online.

Morrisons’ decision coincides with a rise in coronavirus cases in the UK.

The UK’s fourth-biggest supermarket chain is expected to announce the move on Thursday.

Morrisons had about 97,000 workers before the pandemic and took on 45,000 extra temporary staff during the coronavirus crisis.

About 25,000 of those staff are still working for the supermarket, and more than 6,000 have already been given permanent jobs.

Morrisons is expected to announce on Thursday – when it publishes its interim results – that it plans to make thousands more temporary positions permanent in the coming weeks.

A spokesperson said: “Morrisons has been playing its full part in feeding the nation and that has required the largest recruitment drive our company has ever seen.”

Since March, supermarkets have seen a huge increase in demand, especially for online deliveries.

Out of those 25,000 extra staff, Morrisons uses 9,000 to pick and deliver to deal with the surge in online demand.

As well as its own delivery service, Morrisons also partners Amazon and Deliveroo, and recently announced that customers could do a full Morrisons food shop on Amazon UK.

Extra staff have also been needed in Morrisons supermarkets to keep them running properly, and to make sure the supermarkets conform to coronavirus safety guidelines.

Supermarket chain Iceland said on Tuesday that it will have created more than 3,000 jobs between March this year and Christmas to cope with demand for home deliveries.

It said that lockdown in particular had boosted online orders, and that demand “shows no sign of slowing down as the weather shifts over the coming weeks and months”.

It is also increasing its delivery fleet by just under a third.

Iceland added that it was partnering with UberEats in London to make deliveries from its Hackney store.

The closure of many High Street shops during the pandemic helped to drive up online sales, and for some firms that demand has continued.

Tesco said in August that it would create 16,000 new permanent jobs after “exceptional growth” in its online business.

Amazon said last week that it would create a further 7,000 jobs this year to meet growing demand. In June, delivery firm DPD and B&Q owner Kingfisher said they would be hiring thousands more staff.

However, many more thousands of people have lost their jobs in the UK.

Data obtained by the BBC showed that British employers planned more than 300,000 redundancies in June and July,

And the government’s Job Retention Scheme, which has protected 9.6 million jobs throughout the coronavirus lockdown, is due to come to an end in October.

Tue Sep 8 , 2020
This is the third in a series of stories examining how school districts around the country are coping with the coronavirus pandemic. You can read the whole series here. By Peter Cameron/The Badger Project The 40-acre farmette where the Hellenbrand family lives in south-central Wisconsin is an eclectic mix of […] 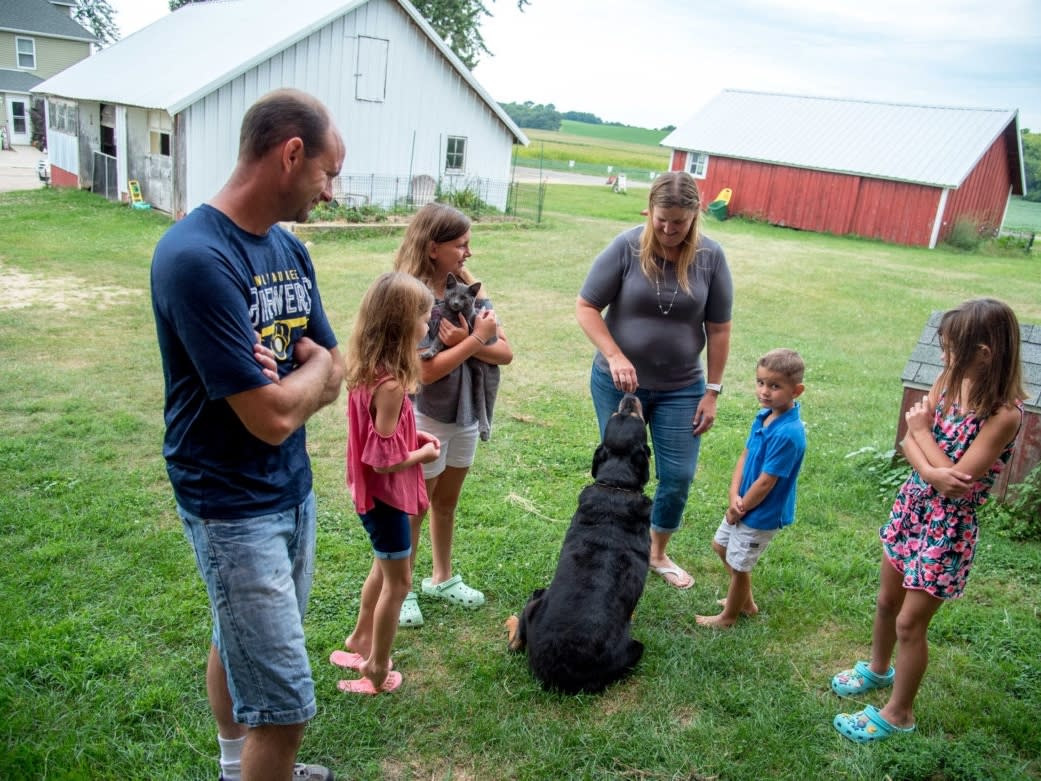