Tosha Waggoner, 33, would love to land a job. But she wasn’t sure that depositing a $6,000 check that arrived out of the blue was the right way to get one. Admittedly, her job hunting prospects have been bleak after she gave birth to a daughter in April, when many […]

Tosha Waggoner, 33, would love to land a job. But she wasn’t sure that depositing a $6,000 check that arrived out of the blue was the right way to get one.

Admittedly, her job hunting prospects have been bleak after she gave birth to a daughter in April, when many businesses had closed their doors during the pandemic. Her fiancé isn’t working either, but he’s going to a union trade school for masonry.

They could use the money, like most people during the economic downturn.

“It was a straight up check,” Waggoner said.

The instructions, sent in August by a supervisor named Michael, indicated that she’d need to deposit the $6,000 check to buy gift cards, take photos of the numbers on the gift cards and send them to Michael.  And there was something involving a Bitcoin account, too.

Still no stimulus check?: Remember an Oct. 15 deadline is coming up

More than a few things about that check made her think twice: Who, after all, sends $6,000 checks out of the blue? And who needs a Bitcoin account to hold a job?

Fake job offers are flooding email accounts and mailboxes, according to consumers who are looking for work. Many typically involve better-than-expected pay, gift cards, a quick online interview — and yes, a check out of the blue.

One hot scam asks mystery shoppers to see whether COVID-19 safety procedures are being practiced at Walmart and elsewhere.

Consumers report being sent checks of $1,475 and being told they’ll make $425 for shopping at two Walmart stores and a bank. The checks look like they’ve cleared the bank in a couple of days — but weeks later the checks are discovered to be fakes, long after the consumer has lost hundreds of dollars to the scam.

No legitimate business, of course, is going to pay in advance and then ask you to send a MoneyGram to return some of the money or buy gift cards or pay for supplies.

“These kind of job scams have always been popular but criminals are doubling down when they know millions of people have lost their jobs during the pandemic,” said Amy Nofziger, director of the AARP Fraud Watch Network.

Someone who is looking for a job shouldn’t overlook the possibility that a con artist can create the perfect job just for you, based on your education and skill set before sending you a text or email.

“A lot of time when people are looking for jobs, they will publicly post their resumes,” Nofziger said.

The fraudsters now know if you’ve just graduated with an arts degree or you’re interested in the social services field.

“When they target you with a tighter arrow, you’re more likely to think they really want me because they did their research on me,” Nofziger said.

Some offers sound like they’re from real nonprofit organizations, government agencies or actual businesses. But the con artists are only impersonating the real deal.

Sometimes, students report getting an email that looks like it’s from their college’s Job Placement and Student Services office.

Con artists are dangling all sorts of promises and potential paychecks during the pandemic as many consumers find themselves out of work longer than expected.

You might be offered a chance to work remotely or take advantage of flexible hours, something that can sound quite tempting if you’re short on cash and now must play hall monitor for your school-age children who are taking online classes at home.

The employment scam can be one of the riskiest scams for students, young consumers, military spouses and others, given the level of monetary losses and percent of reports that involve actual victims, according to the Better Business Bureau.

The median loss was $1,500 for employment scams, according to a 2019 BBB report. The losses are about half of those for romance scams but often far greater than those for online shopping scams, tech support scams, and scams involving advance fees for loans.

The employment scam made up 9.3% of all scams reported to BBB Scam Tracker in 2019.

Julie Graham, a recent graduate of the University of Michigan-Flint with a bachelor’s degree in Fine Arts, told me that she thought she had a possible interview on Google Hangouts with a man who claimed to be Mr. Samuel Galvan, the hiring manager for the GEA Group.

He reached out to her via email after he claimed he found her resume on Indeed.

“The whole interview seemed wonky from the start and I was getting a gut feeling things were not right,” said Graham, 44, who is from Flint.

First, they promised $45 an hour for an entry level graphic designer job, which seemed too good to be true.

The interviewer also made unusual statements in what turned out to be a two-hour, text-only interview process, such as: “GEA Group is establishing a branch office in your area in the next couple of months. Hence, we are recruiting via online potential employees who would eventually have an office space.”

“For now,” the interviewer continued, “this is going to be an online and work from home job. The working hours are flexible where you could choose to work from anywhere of your choice.”

And Graham, who lost her hearing as an adult, said, she appreciated a chance to interview initially by text but knows the conversation was extremely odd.

“Because of my hearing disability,” she said, “I never really believe what people say.”

The interviewer wanted to send her a check in order to get the programs up and running so she could work from home. But he also wanted her to hand over personal information so that check could be sent.

She said the person seemed to be suggesting a way to direct deposit the check that would be used to pay her for supplies and programs to work from home.

She told him that she needed more proof that the job was real and that seemed to be the end of that. She never heard from anyone again.

“I am convinced they were aiming to scam,” Graham said. Her kind nature forced her to add that she has no real proof she was about to be ripped off. But all the signs of a scam were clearly there — including that scammers often do interviews chatting via Google Hangouts.

Once she emailed the company named, she received a response telling her that this was a scam and she shouldn’t pay any money or share personal information.

Another college-age job hunter in New York received an e-letter out of the blue, promising a work-from-home opportunity at The Center for Disability Services in Albany, New York. The salary range was between $400 and $600 a week.

Yet the center notes on its website: “The Center for Disability Services does not send unsolicited offers of employment nor does it request candidates to advance or cover expenses on the Center’s behalf.”

Don’t cash a check — or give bank account information

Somehow along the line, the con artist figures out a way to get money from you when you’re desperately trying to make money.

Michigan Attorney General Dana Nessel’s office told me that the AG is beginning to hear reports where scammers ask for bank account information as part of a job offer.

“The obvious concern there is scammers then have access to your finances and can steal your money or potentially use your account for other purposes,” said Ryan Jarvi, press secretary for the attorney general.

And there is the old fake check scam. You’re sent a check that looks quite authentic but ultimately is fake. Scammers are banking on how the check clearing system works, causing you to think a check is real because the money is available in a few days.

Some scammers say: “As soon as the funds are made available by your bank, withdraw the money” to do your job as a mystery shopper, cover an “accidental overpayment,” buy gift cards or follow other steps in the process.

The fake check ultimately will bounce but it may be weeks until you discover that sad fact.  And you’re out whatever money you wired, spent or put on gift cards.

Michigan consumers can file complaints with the office’s consumer protection team at mi.gov/agcomplaints.

And you can file complaints about job scams with the Federal Trade Commission at FTC.gov. Or the Better Business Bureau’s scam tracker at BBB.org/scamtracker.

Given all the pressures that many people are facing, unfortunately, some might take a chance and believe that they’ve got a real job prospect.

Waggoner, fortunately, spotted another red flag before she was taken for big money.

Why, she wondered, was this job offer somehow also involving a Bitcoin account? Her fiancé lost some money after getting hit by some sort of scam where Bitcoin was involved — so both of them were particularly hesitant about that one.

Good thing she didn’t fall for it — or else she could have lost up to $6,000 when she deposited that check and it bounced weeks later, leaving her on the hook for the money that was used to buy those gift cards or deposit. The scammers could access the cash on the cards when she handed over the numbers on the cards.

“As soon as I saw Bitcoin, I just ripped it up and threw a million pieces into the garbage can,” Waggoner said.

Waggoner says she gets texts every day about some kind of odd job.

“I’ve been getting these messages ever since this stupid pandemic has been going on,” Waggoner said.

Personal trainer Alice Liveing on why weight loss isn't everything

Fri Sep 25 , 2020
I was in a physically abusive relationship 10 years ago when I was a teenager. I can only describe it as being in a snow globe when you shake it up and your whole life is in pieces. I had to rebuild myself from the ground up – I had […] 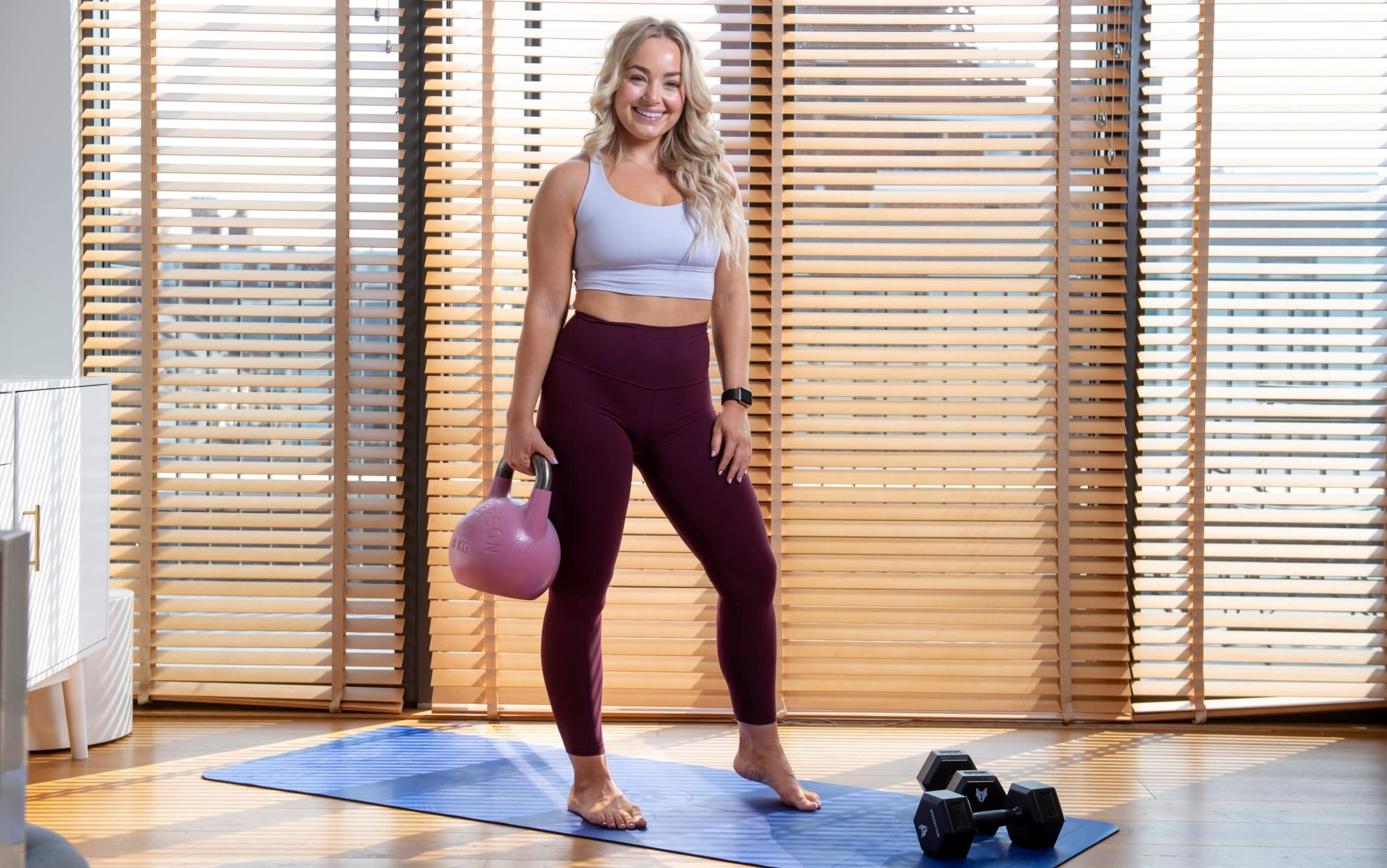