WASHINGTON — The Trump administration Thursday finalized a requirement for insurers to tell consumers up front the actual prices for common tests and procedures. Insurance plans will also be required to make their in-network negotiated rates with doctors and allowable out-of-network rates available to the public, according to the multiagency […]

WASHINGTON — The Trump administration Thursday finalized a requirement for insurers to tell consumers up front the actual prices for common tests and procedures.

Insurance plans will also be required to make their in-network negotiated rates with doctors and allowable out-of-network rates available to the public, according to the multiagency rule. They will be required to post their negotiated pharmaceutical prices and the historical net prices for all their covered drugs.

A major health insurance industry group said the regulation would have the opposite effect, raising premiums.

Most plans, including employer-based group health plans and health insurance issuers offering group and individual coverage, will be required to post the information.

The late-innings policy announcement ahead of Election Day comes as President Donald Trump has been hammered on health care by Democratic challenger Joe Biden for the administration’s handling of the coronavirus pandemic and its unrelenting efforts to overturn the Affordable Care Act, the 2010 law providing coverage to more than 20 million people.

A related Trump administration price disclosure requirement applying to hospitals is facing a federal lawsuit from the industry, alleging coercion and interference with business practices.

The idea behind the new regulations on insurers is to empower patients to become better consumers of health care and help drive down costs.

But the requirements would take effect gradually over a four-year period, and patients face a considerable learning curve to make cost-versus-quality decisions about procedures like knee replacements or hernia repairs. Add to that political uncertainty about the policy’s survival if Trump doesn’t get re-elected, and the whole effort is running into skepticism.

Administration officials are adamant the changes will stand, arguing that the goal of price transparency transcends political partisanship.

“It will be impossible to walk backwards on this,” Health and Human Services Secretary Alex Azar said. “How do you fight transparency on prices? How do you actually articulate the argument that you should conceal what something costs from the person trying to purchase it?”

Insurance companies contend that the rules will boomerang economically, by undercutting their ability to bargain with hospitals, drug companies, doctors and other industry players. Providers now accepting discounted rates will press to get paid more once they see what their upper-end competitors are getting.

“The final rule will work to reduce competition and push health care prices higher — not lower — for American families, patients, and taxpayers,” Matt Eyles, president of America’s Health Insurance Plans, said in a statement. “This is precisely the opposite of what Americans want in their health care.”

The new rules are being issued jointly by Health and Human Services, the Labor Department and the Treasury, which share jurisdiction over health insurance plans. They would:

• Starting in 2022, require insurers to make available data files on the costs of various procedures, allowing technology companies to design apps that let patients see costs not only under their own plan but other insurers’ plans as well.

• Starting in 2023, require insurers to make available to their policyholders cost-sharing details on 500 specific services, medical equipment and other items, as called for by the government.

• Starting in 2024, require insurers to make cost-sharing information available on all the services and goods they cover.

Patients would use an online shopping tool from their plan to see the negotiated rate between their doctor and the insurer, as well as an out-of-pocket cost estimate for procedures, drugs, durable medical equipment and any other item or service they may need.

“We need to keep pricing on the front end, not the back end,” said Seema Verma, head of the Centers for Medicare and Medicaid Services. “We have seen in every single industry that when this information is provided to consumers, it creates a new era of consumerism.”

The issue of health care price transparency started attracting more attention under the Obama administration, as then-Health and Human Services Secretary Kathleen Sebelius oversaw the disclosure of list prices charged by hospitals. The Trump administration’s initiative drills down more deeply to try to get at the prices actually paid by insurers.

“Transparency is here to stay, even in a Biden administration,” said Kavita Patel, a former Obama White House health policy adviser. However, she said she believes Biden would seek to reshape the Trump rules to focus more on quality, helping patients find high-value providers and services.

The finalized rule is similar to a Centers for Medicare & Medicaid Services rule that requires some 6,000 U.S. hospitals to disclose their negotiated rates with insurers for 300 common medical services, along with the discounted cash price they’re willing to accept for those procedures. The American Hospital Association led the lawsuit that industry groups and hospital systems brought against the regulation that’s set to take effect Jan. 1.

A federal district judge in Washington, D.C., upheld the rule in June. The hospital groups appealed, arguing the rule unlawfully expanded the definition of “standard charges” that a hospital must disclose under a provision in the Affordable Care Act to include these negotiated rates.

The U.S. Court of Appeals for the District of Columbia Circuit has yet to issue a ruling in the case.

Information for this article was contributed by Ricardo Alonso-Zaldivar of The Associated Press and by Shira Stein, Lydia Wheeler and John Tozzi of Bloomberg News. 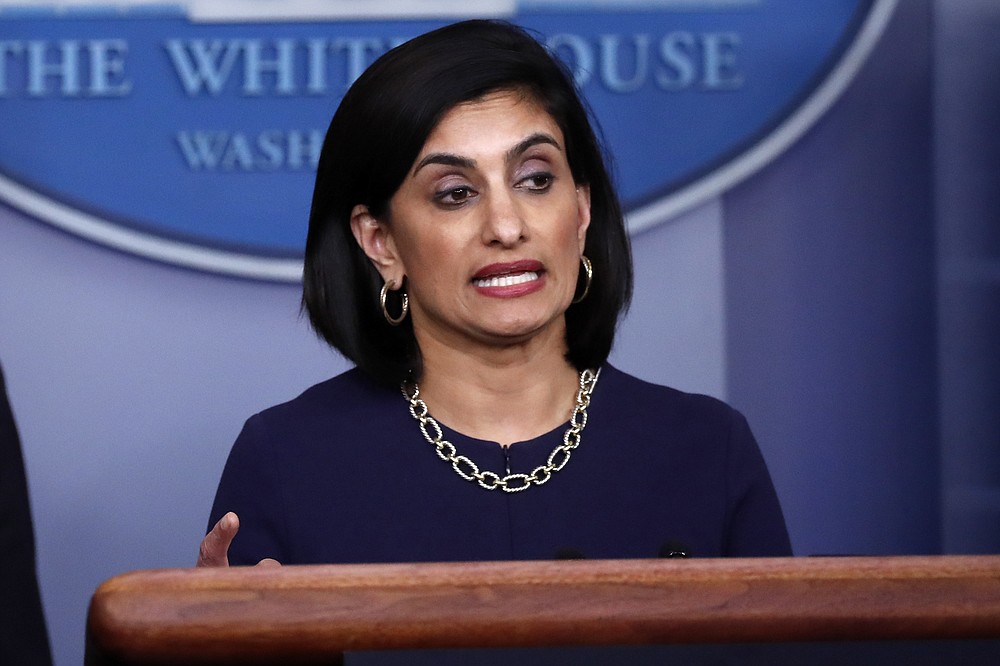 FILE – In this April 7, 2020, file photo, Seema Verma, administrator of the Centers for Medicare and Medicaid Services, speaks about the coronavirus, in the James Brady Press Briefing Room of the White House in Washington. Medicare will cover the yet-to-be approved coronavirus vaccine free for older people under a policy change expected to be announced shortly, a senior administration official said Tuesday. (AP Photo/Alex Brandon, File)