Since 2014, Markisha and Carlos Swepson have been serving up catfish breakfast, smothered pork chops and other handcrafted American food at BLVD Bistro in New York’s Harlem neighborhood. With wood floors, exposed pipes and comfy booths, the eatery has earned raves from diners and online reviewers. “All my resources — […]

Since 2014, Markisha and Carlos Swepson have been serving up catfish breakfast, smothered pork chops and other handcrafted American food at BLVD Bistro in New York’s Harlem neighborhood. With wood floors, exposed pipes and comfy booths, the eatery has earned raves from diners and online reviewers.

“All my resources — financially, emotionally — are into BLVD Bistro,” Carlos said. “This is my life. This is what we do. This is how I can send my daughter to college.”

Now that goal is threatened — not only by Covid-19-related shutdowns, but also by their lender, a New Jersey-based company called World Business Lenders. The company, which makes high-cost small-business loans, is known for hard-line collection practices when borrowers fall behind, court records show. For example, it seizes merchants’ homes and other properties backing the loans and adds costly penalties during foreclosures.

The Swepsons are experiencing these practices firsthand. Because of a lengthy renovation and lower revenues during the coronavirus pandemic, the couple are behind on two loans arranged by World Business Lenders. The loans, totaling $67,000, have an effective annual interest rate of 268 percent, court filings show.

Many states, New York included, bar interest rates like those. But high-cost lenders can circumvent such limits, known as usury caps, through what are known as rent-a-bank schemes. And under the Trump administration, critics say, the schemes have gotten a boost from two rules approved this year by the top federal banking regulator, the Office of the Comptroller of the Currency, or OCC.

The rules enable lenders operating in states with interest rate caps to team up with entities in states without caps to evade the limits on loans they make together. The schemes can involve consumer loans as well as small-business financings.

Both rules were approved under the leadership of Brian Brooks, acting head of the OCC; Brooks was vice chairman of OneWest Bank, the California lender purchased in 2008 by an investor group led by Steven Mnuchin, now the Treasury secretary, for $1.3 billion. The institution, previously known as IndyMac, had collapsed under soured mortgages, and the Federal Deposit Insurance Corp. agreed to absorb most of the bad loans. The group sold OneWest in 2017 for $3.4 billion.

On Nov. 27, President Donald Trump nominated Brooks to a five-year term as comptroller. It is unclear whether he will be confirmed before President-elect Biden takes over.

In a statement, Brooks said through a spokesman that the new rules protect borrowers by subjecting banks in such schemes to regulation. “Banks can’t lend out their charter and walk away from the loans they make in the context of a partnership between a bank and a third party,” Brooks said.

But predatory lending experts disagreed, saying that the rules will legitimize entities offering such high-cost loans and that rent-a-bank schemes have increased in recent years as regulators in the Trump administration chose not to crack down on them.

“It’s been hard for small businesses to get the money they need to survive,” said Linda Jun, senior policy counsel at Americans for Financial Reform, a nonprofit advocacy group, “and now we have the bank regulators, instead of trying to work with their institutions on that, saying, ‘We’re going to throw some more sharks your way.'”

Among the high-cost lenders benefiting from the rules is World Business Lenders, an online entity founded in 2011 and based in Jersey City, New Jersey. It teams up with Axos Bank of Nevada, a state with no interest rate limits, to make high-cost loans, documents show.

Axos, previously known as Bank of the Internet, was involved in two real estate transactions around 2018 with Kushner Companies, Jared Kushner’s family enterprise, ProPublica has reported. Kushner is Trump’s son-in-law and senior adviser. The transactions involved properties in Brooklyn, New York, and in New Jersey.

Shane Heskin, a lawyer representing the Swepsons and other World Business Lenders borrowers, has conducted extensive discovery about its lending practices.

A spokesman for Axos Bank denied that assessment, saying in a statement that the company “exercises continuous oversight over its third-party service providers pursuant to a rigorous compliance program specifically designed to meet” OCC standards. He characterized the bank’s work with World Business Lenders not as a rent-a-bank scheme, but as “a responsible and legal third-party program management relationship that follows the bank sponsorship model.”

Highlighting the new OCC rule as evidence of the legality of the set-up, he added: “This type of third-party relationship is legal, widespread and provides ascertainable benefits to banking institutions and the borrowing public.”

Andy Occhino, general counsel of World Business Lenders, echoed that view, saying that the company’s loan program with Axos Bank is “supported by regulators of financial institutions” and that it is “vital to meeting the credit needs of Main Street America and for the efficient operation of our country’s financial system.”

In 2018, the Treasury Department’s inspector general issued a report on a criminal investigation into Axos Bank that concluded with no action taken. In the report, which was reviewed by NBC News, the OCC noted that the bank’s internal audit functions had “significant weaknesses” but said the weaknesses had been disclosed to the regulator.

Axos’ spokesman said that the lapses were related to failures by an internal auditor formerly employed by the bank and that they were addressed and remediated in 2015.

World Business Lenders is owned by Doug Naidus, a former mortgage executive and founder of MortgageIT, a home loan originator that ran into regulatory problems in the aftermath of the 2008 financial crisis. Naidus declined a request for an interview, Occhino said.

Foreclosing on small-business borrowers’ homes and properties, as World Business Lenders is doing with the Swepsons, is not uncommon at the company. During a deposition this fall in a lawsuit against it, one of its executives said it files foreclosures in about 10 percent of the 500 or so loans it makes every year. A World Business Lenders entity holds 41 properties, worth $9 million, that had belonged to borrowers it foreclosed on, the executive said.

For example, at the end of September, only 0.59 percent of home loans were in foreclosure, according to the Mortgage Bankers Association. And during the 2008 financial crisis, the foreclosure rate hit 2.5 percent.

In the Great Depression, however, foreclosure rates peaked at 13.3 percent, according to the Federal Reserve Bank of St. Louis.

Such foreclosures are a right that World Business Lenders pursues only after “all reasonable attempts to amicably resolve the matter with the borrower/guarantor have proven unsuccessful; and, during the current pandemic, only as, if and when permitted in the relevant jurisdiction,” Occhino said in a statement.

Erik Hansen-Dreijer, owner of an ocean tugboat operation in Mobile, Alabama, is another World Business Lenders borrower facing foreclosure. At risk is the 2003 dream home he built with Martha, his wife of 41 years.

After an accident left Hansen-Dreijer unable to work in 2019 and no bank would lend him money to make up the shortfall, he took funding offered by World Business Lenders. Covid-19 shutdowns subsequently forced him to stop operating the business, which his father founded in 1950.

Hansen-Dreijer’s interest rate on one loan was 127 percent, records show, while another was 85 percent; repayments were due weekly. Alabama laws generally cap interest rates at 8 percent but allow higher rates “if not unconscionably high.”

“The only way they’d make the loans was if I agreed to a second mortgage with them on my home,” Hansen-Dreijer said.

Hansen-Dreijer said that the borrowing process took place electronically and that it was rushed. “When you look at what they send you, it’s volumes,” he said. “I received it on a Thursday, and they expected me to sign it on Friday.”

Occhino, World Business Lenders’ general counsel, said the company “operates within a voluntarily implemented, self-regulating compliance framework having, at its core, a best-practices, fully transparent infrastructure, developed in conjunction with and closely monitored by Axos Bank’s compliance team.” He said both Hansen-Dreijer and the Swepsons were knowledgeable businesspeople and knew that defaulting on the loans meant they could lose their properties.

Hansen-Dreijer fell behind on the loans during the summer of 2019. He said World Business Lenders initially pestered him for repayment; then, last month, it filed a foreclosure action giving him until Nov. 16 to pay. Both loans carry prepayment penalties. He filed for personal bankruptcy to try to hang onto his home.

World Business Lenders is among a thriving group of online financial concerns filling a void created about a decade ago when large banks began cutting back on lending to small businesses. Trimming their lending to small merchants, big institutions focused instead on the greater profits in loans to larger companies.

During the past five years, for example, only 44 percent of small businesses surveyed received funding from banks, according to a 2020 Small Business Credit Survey by the Federal Reserve System. And a 2019 analysis by the Small Business Administration shows that bank lending to large businesses increased by 30 percent since 2015 but that small-business lending at the institutions grew by only 7.6 percent.

Online lenders have operated with little scrutiny from regulators, but that may be changing. This year, the Federal Trade Commission and the New York attorney general’s office have sued several companies peddling loans with usurious terms. The suits have highlighted abusive collection practices among the companies, including a lender whose officials threatened bodily harm to borrowers if they did not repay.

World Business Lenders has not been subject to any of those regulatory actions.

Naidus, World Business Lenders’ founder, is a serial entrepreneur. He created MortgageIT, a subprime mortgage company, in 1999. In 2007, as the wheels were coming off the home mortgage market, he sold the company to Deutsche Bank for almost a half-billion dollars.

In 2011, the Justice Department sued Deutsche Bank and MortgageIT, contending that MortgageIT officials had repeatedly made false certifications that the company’s loans were eligible for taxpayer-backed insurance when they were not. The improprieties occurred from 1999 to 2009, the government said. Deutsche Bank and MortgageIT admitted to the conduct and agreed to pay $202 million to settle the case in 2012.

In 2013, MortgageIT also paid $12.1 million to settle allegations by the Department of Housing and Urban Development that the company discriminated against Black and Hispanic borrowers by charging them higher rates. MortgageIT denied HUD’s allegations and settled without admitting wrongdoing.

Occhino, the World Business Lenders general counsel, who was also at MortgageIT, said Naidus would not comment about the MortgageIT settlements. “The credit crisis of 2008 is well-chronicled,” he said.

Traveling with Fido? How to find a pet-friendly hotel

Tue Dec 8 , 2020
istock This article is reprinted by permission from NerdWallet.  Traveling with pets can seem like a daunting task. Hotel pet policies are complicated, inconsistent and full of gotcha fees. But with a bit of preparation and an understanding of how the policies work, you can avoid these costs and headaches. […] 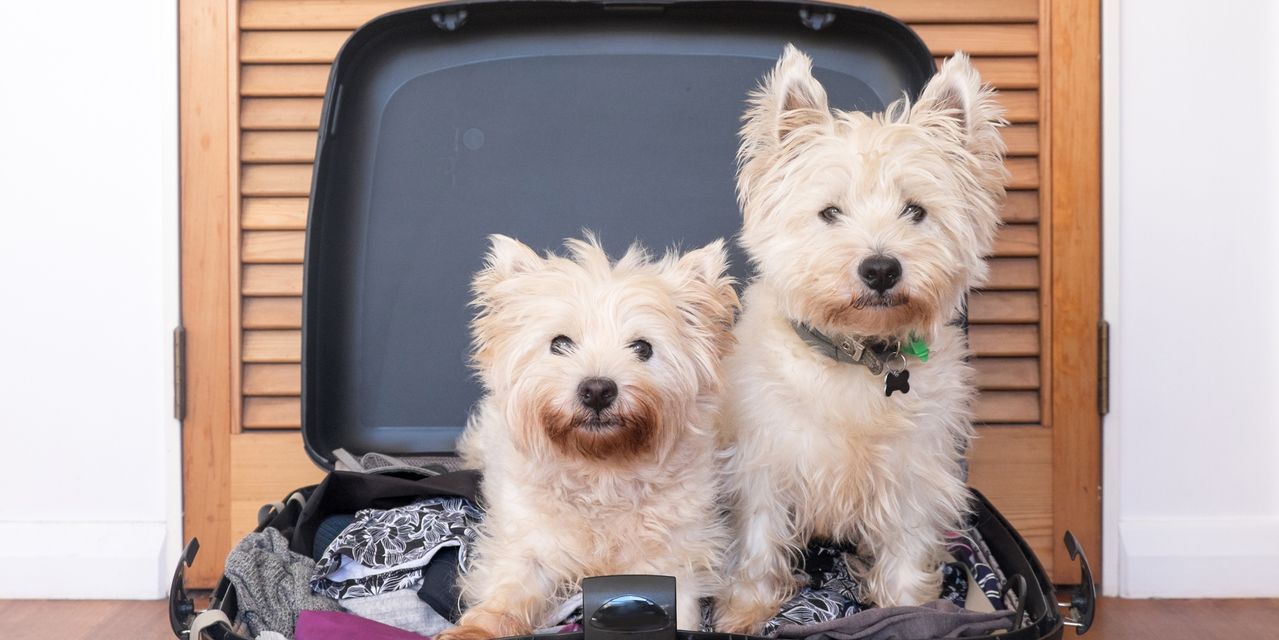