On TikTok, #FreeBritney conspiracy theories run deep An online campaign is calling for the end of Britney Spears’ conservatorship so the pop star can gain financial and personal independence. Some believe she’s sending SOS messages to supporters in coded social media posts. The tag #FreeBritney has roughly 140 million views […]

An online campaign is calling for the end of Britney Spears’ conservatorship so the pop star can gain financial and personal independence. Some believe she’s sending SOS messages to supporters in coded social media posts.

The tag #FreeBritney has roughly 140 million views on TikTok, and 104,000 posts on Instagram. Supporters demand that Spears, who hasn’t made major financial or career decisions since a mental health crisis in 2008, be freed from her father’s legal guardianship.

In many states, including where Spears resides in California, a judge will appoint a conservator for an adult who can’t make their own life decisions, like the elderly or mentally impaired. A New York Times investigation into Spears’ conservatorship reported that Spears “cannot make key decisions, personal or financial, without the approval of her conservators: her father, Jamie Spears, and a lawyer, Andrew M. Wallet.” Everything, from Starbucks purchases to iTunes revenue, is tracked. In the documentary The Guardians, certified Nevada guardian Susan Hoy likened conservatorship to “stepping into that person’s shoes” as the guardian has “full access into their life.”

But despite being legally dependent on her father and lawyer, Spears has continued to perform and release music. From a residency in Las Vegas to a stint as an X Factor judge, Spears has continued working, which is rare for someone under conservatorship. Her $60 million fortune and any business deals that involve it, however, remains under the control of her father. Wallet stepped down as co-conservator in March 2019, and Jamie Spears resigned in September 2019, citing health concerns. Spears is under the temporary conservatorship of her care manager, Jodi Montgomery.

In an April 2019 Instagram post, roughly three months after she canceled her Las Vegas residency and three weeks after she checked into a mental health facility, Spears assured fans of her independence.

“Don’t believe everything you read and hear. Your love and dedication is amazing, but what I need right now is a little bit of privacy to deal with all the hard things that life is throwing my way,” Spears wrote in the Instagram caption. “You may not know this about me, but I am strong, and stand up for what I want!”

What is the goal of the #FreeBritney movement?

The Instagram account freebritneyla, which has also organized rallies in support of Spears and provided supporters with actionable items to help the cause, alleges that the conservatorship is a cash grab for those who manage her.

“For 12 years, she has been denied basic human rights under a legal tool reserved for incapacitated individuals that generates millions of dollars in revenue for her team,” freebritneyla wrote in an Instagram caption.

Action items include attending rallies in support of Spears, signing petitions to assign her a new lawyer, and demanding an independent audit of Spears’ conservatorship. The leaders of the movement also suggest writing to California Attorney General Xavier Becerra to demand a statewide investigation of the probate court system, which supporters say exploited Spears.

Why is this gaining traction now?

The #FreeBritney movement has a renewed sense of urgency as fans believe Spears is sending coded cries for help through her social media posts.

In one particularly frantic video posted to her TikTok, Spears wishes the LGBTQ community a happy Pride month. In the comments, TikTok users urged her to “wear yellow” and “do a spin” if she needed help. In the next video Spears posted to both Instagram and TikTok, she spins into the frame wearing a yellow top and holding a bouquet, a “surprise” from her florist. She then walks back and forth across the frame for the duration of the video.

TikTok users were immediately alarmed by the new post, and conspiracy theories surrounding Spears’ independence have flourished since. In a viral TikTok with over 630,000 likes, a fan posted screenshots of the comments from Spears’ Pride video, and then played the clip of Spears spinning.

A fan also asked her to post doves if she was in trouble, and days later Spears posted a Hans Zatzka painting that included doves. As The Cut notes though, Spears’ Instagram posts receive thousands of comments and it’s unlikely she reads all of them.

apparently someone on twitter asked britney to post doves if she was in trouble… look at her most recent ig post. we need to save britney spears NOW pic.twitter.com/DgOkInBKHj

A series of videos by former in-house director Andrew Gallery only fueled the movement on TikTok. Gallery worked with Spears on her 2008 documentary Britney: For the Record. He claimed that Spears gave him a letter discussing her conservatorship, but her conservators destroyed the original. Reading from a copy, he alleged that Spears complained she “has no rights.”

The letter, which is written in the third person, acknowledged the Spears “spun out of control” following her divorce from Kevin Federline, but that “any mother would.”

“As long as the people are getting paid, she has no rights. It could go on for a while. But it doesn’t make it right at all,” the letter continued. “She’s a very giving person and would love to get the respect she deserves.”

Conspiracy theories thrive on TikTok; the app recently banned tags related to the far right conspiracy theory QAnon in an effort to curb its influence. As the #FreeBritney movement continues to gain traction on the platform, users are finding increasingly less credible connections. One viral TikTok video claimed Spears spelled out HELP in a recent Instagram post through specific poses. Another claimed that by adjusting the brightness and saturation of a recent Instagram post, fans could see 911 written in Spears’ pupils.

While far-fetched, other celebrities calling to #FreeBritney validates some of the theories. Paris Hilton, a longtime friend of the pop star, tagged a TikTok with #FreeBritney.

The campaign to #FreeBritney is coming to a head with a renewed sense of urgency because Spears’ mother, Lynne Spears, filed paperwork to be more involved in her daughter’s finances. It’s worth noting that Lynne Spears has also liked social media posts with the #FreeBritney tag.

Spears was supposed to have a hearing regarding her temporary conservatorship in April, but because of the pandemic, it was pushed to July 22. Fans gathered at the Stanley Mosk Courthouse in downtown Los Angeles to show their support. The Blast reports that Spears was supposed to attend the hearing via Zoom, but didn’t show up because of “technical difficulties.” According to TMZ, the hearing was sabotaged because people unrelated to the case crashed the virtual meeting. Her new court date is Aug. 19.

Spears herself set up fans to “ask questions” in a recent Instagram post, but didn’t address anything related to her conservatorship. Instead, she answered fans’ burning questions about her favorite Disney movie (it’s Frozen), her bedtime (between 11:30 PM and midnight), and her favorite flower (roses).

It’s possible she’s trolling her fans for trying to get involved in her personal business. Devoted supporters may decipher more coded messages from her answers. But it’s also possible that she’s just being Britney Spears.

'I started a fashion business from two suitcases'

Mon Jul 27 , 2020
The BBC’s weekly The Boss series profiles different business leaders from around the world. This week we speak to Rwandan fashion designer Joselyne Umutoniwase. In 2010, Joselyne Umutoniwase took a bold decision. She had been working as a film editor for five years but decided to follow her dream of […] 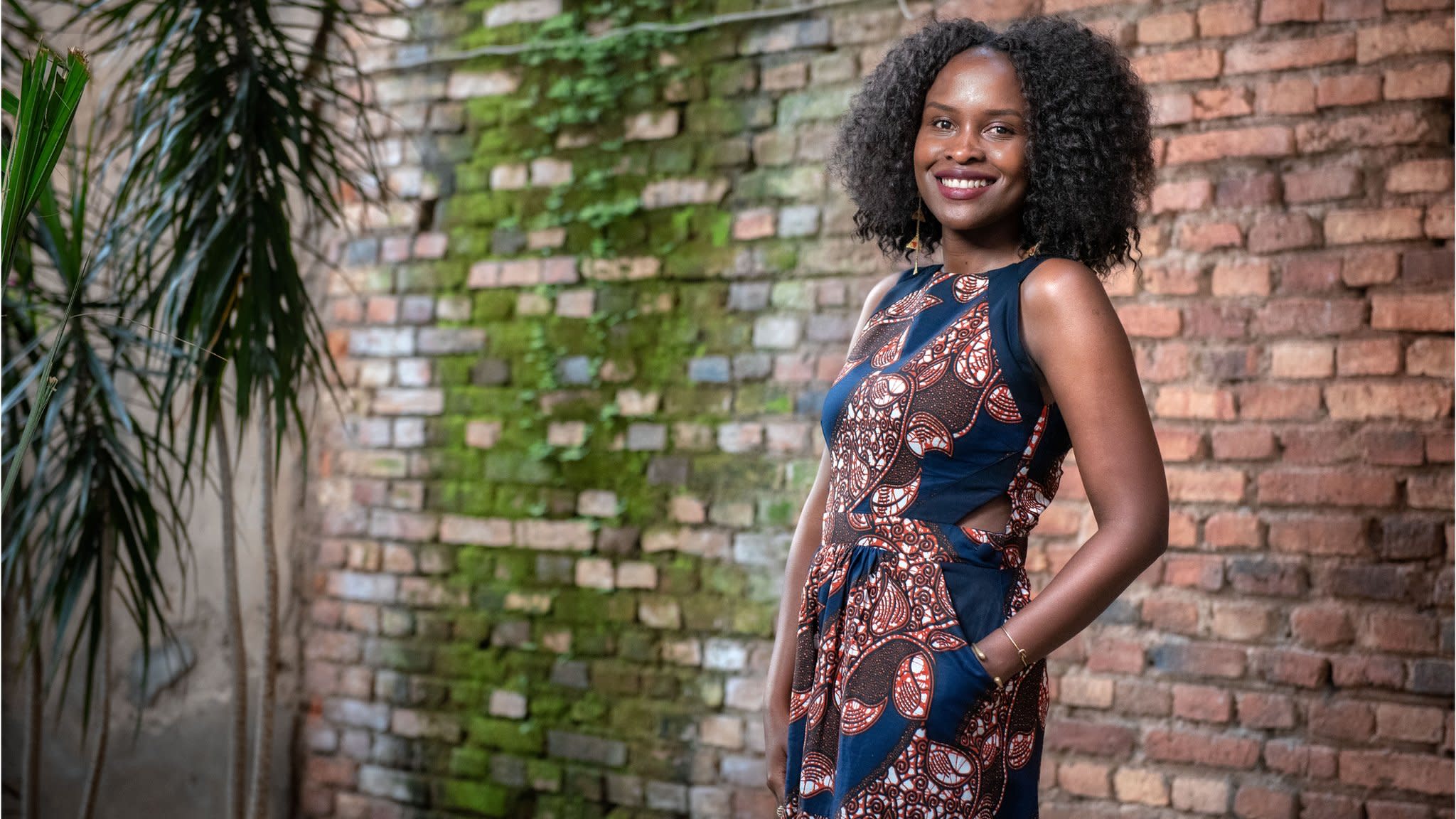