The claim: USPS advises against sending cash in the mail because it isn’t secure. What about mail-in ballots? With the U.S. Postal Service embroiled in political turmoil, some have begun to question whether it is capable of facilitating a large-scale vote-by-mail election. “The Post Office advises never send cash in the […]

The claim: USPS advises against sending cash in the mail because it isn’t secure. What about mail-in ballots?

With the U.S. Postal Service embroiled in political turmoil, some have begun to question whether it is capable of facilitating a large-scale vote-by-mail election.

“If you want to vote for ‘ol creepy Uncle Joe by mail, then request an absentee ballot,” one of his comments reads. “Me personally, I’d wade through a crowd of symptomatic coronavirus-infected BLM members wearing a MAGA hat, whistling ‘The Star-Spangled Banner’ to cast my vote in person.”

The Postal Service has not stated people should “never” send cash in the mail. However, it did suggest to USA TODAY and on its website that there are better ways to transport money via mail.

“Regarding sending cash in the mail, no, we do not prohibit it and continue to advise customers about the options they have,” USPS spokesperson Kim Frum told USA TODAY. “It is advisable to send money via a personal or certified check or money order, as these are traceable, and a stop payment can be put on a check if it doesn’t arrive at its destination.”

The Postal Service goes into further detail on its website, noting that money orders are a “safe alternative” to cash and personal checks because of the reasons Frum noted. The status of money orders purchased from USPS can be tracked using a serial number, post office number and the issued amount of the order.

Cash, on the other hand, is generally untraceable. Still, if a person decides to mail cash, it can be insured. For registered mail — the Postal Service’s most secure mail service, which is protected by “safes, cages, sealed containers, locks and keys” — cash can be insured up to $50,000, Frum said. Cash sent any other way only allows insurance coverage up to $15. Of course, there are ways in which sending cash through the mail is illegal, such as if the purpose is to evade taxes or launder money.

Nordmann pointed to a 2018 statement made by USPS spokesman Earl Musick regarding the safety of sending cash through the mail.

“Please don’t mail cash,” Musick told Ohio’s WTOL-TV 11. “That’s just dangerous in anything you do. As I said, don’t leave your mail out too long. Mail checks or money orders, you can get that back.”

When asked whether that specific statement reflects USPS’ current view on sending cash via mail, Frum referred to her statement given above.

The Facebook post insinuates that because USPS suggests alternatives to sending cash through the mail that ballots likely aren’t safe either. The conflation of the two scenarios is misleading.

“The U.S. Mail remains a secure, efficient and effective means for citizens to participate in the electoral process, and the Postal Service is proud to serve as a critical component of our nation’s democratic process,” Frum said.

She added that all U.S. mail is protected by over 200 federal laws, enforced by the United States Postal Inspection Service, one of the nation’s oldest law enforcement agencies. The Inspection Service also has a number of security programs that work to ensure the integrity of election mail specifically, she said.

“Inspection Service has a proud history of identifying, arresting, and assisting in the prosecution of criminals who use the nation’s postal system to defraud, endanger or threaten Americans,” Frum said.

Obstruction of mail could result in a fine or jail time for up to a year.

Unlike cash, ballots can be traced, using bar codes or tracking numbers. There are a number of other ways voter fraud is prevented throughout the vote-by-mail process, like the use of secure dropoff locations and post-election audits.

The Facebook user Nordmann feared political biases of individual postal workers might make a difference in the security of the election, pointing to an instance in Florida where primary election ballots were marked “R” for Republican and “D” for Democrat.

But those markings in this instance are specific to Palm Beach County in Florida, and more importantly, specific to its primary election, as found in a USA TODAY fact-check.

We rate the claim that the U.S. Postal Service advises against sending cash in the mail because it isn’t secure – and thus, voting by mail is not safe, too – as MISSING CONTEXT because the post presents a conclusion not supported by the underlying facts.

USPS has not explicitly said it advises to “never” send cash by mail, though it is advisable to use money orders instead because they can be traced. To conclude that this makes voting by mail unsafe, though, is misleading. There are a number of precautions in place to ensure the security of voting by mail, including the tracking of ballots.

Thu Aug 27 , 2020
Jeff Bezos’ net worth has nearly doubled during the coronavirus pandemic: AFP via Getty Images The personal fortune of Jeff Bezos has risen above $200 billion (£152bn) to reach a new record high. The Amazon founder’s wealth rose to $202bn, according to the Bloomberg Billionaires Index, after shares in the […] 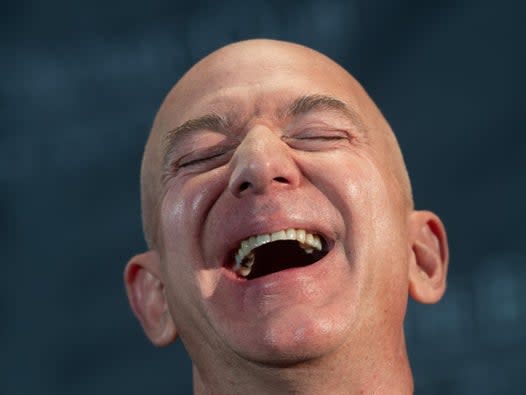