Maicai might initially seem like a minor extension of Pinduoduo’s core platform, which sells discount products and encourages shoppers to make group purchases, but the company’s management mentioned the new platform dozens of times during its latest conference call.

Let’s take a closer look at Maicai, what it means for Pinduoduo, and whether or not it will widen the e-commerce underdog’s moat against its larger rivals.

How fast is Pinduoduo growing?

An extension of Pinduoduo’s produce business

Another major growth engine is fresh produce. Pinduoduo sold 136.4 billion yuan ($19.3 billion) of fresh produce last year, or about 14% of its total gross merchandise volume (GMV), and it believes that figure will nearly double this year.

That growth was sparked by the COVID-19 pandemic, which caused shoppers to avoid traditional wet markets and supermarkets. Throughout the crisis, more shoppers placed bulk orders for fresh produce — such as apples and potatoes — that could be shipped easily. 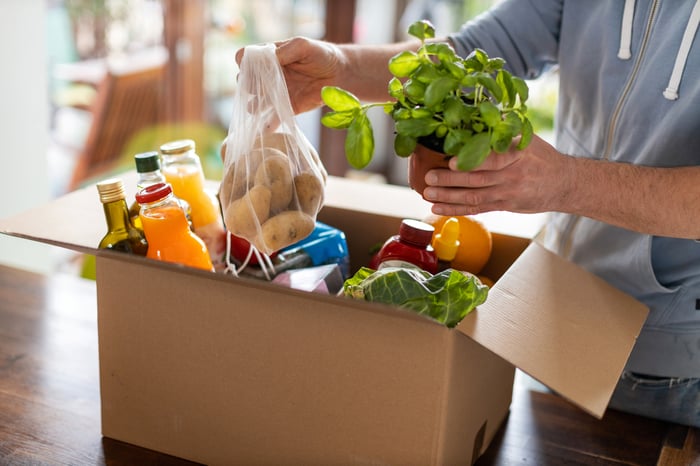 But during the call, CEO Lei Chen noted that not all fresh produce could be easily shipped, and “many packages sustained some damage from heat and poor handling” during the summer. Pinduoduo also lacks a dedicated logistics service like Alibaba and JD, and its fragmented network of leased warehouses and external couriers isn’t ideal for delivering fresh groceries.

Pinduoduo can’t solve those logistics issues anytime soon, so it’s offering Maicai as an alternative for shoppers who are willing to pick up their groceries at local stores or wait for local door-to-door deliveries. Shifting some fresh produce orders to Maicai could also reduce the strain on its logistics services.

Pinduoduo’s finance VP Tony Ma noted Maicai was still a “young initiative” and its financial impact remained “immaterial” in the third quarter, but predicted its long-term prospects could look “very different” as it expands.

Maicai is a clever extension of Pinduoduo’s platform, but Alibaba and JD are also both heavily invested in online groceries.

Alibaba’s Freshippo supermarkets, which had 222 locations last quarter, are already tethered to its e-commerce platform and provide 30-minute deliveries to certain areas. It also recently took over Sun Art Retail (OTC:SURRY), which owns 481 hypermarkets and three mid-sized supermarkets, to expand that network.

JD is partnered with its leading investor Walmart (NYSE:WMT) — which operates 399 Supercenters, 27 Sam’s Clubs, and nine Neighborhood Markets across China — in online grocery deliveries. JD and Walmart are also co-investors in the online grocery delivery service Dada-JD Daojia, which helps both retailers fulfill their orders. JD also operates about 20 7Fresh grocery stores, which tether brick-and-mortar shoppers to its e-commerce platform.

Pinduoduo initially seems outmatched, since it doesn’t own any brick-and-mortar stores or hold partnerships with leading supermarket chains. But for now, Alibaba and JD’s grocery delivery services mainly target top-tier cities instead of the lower-tier cities that drive Pinduoduo’s growth.

With Maicai, Pinduoduo is trying to pull smaller local grocers and vendors, many of which are likely struggling to compete against larger supermarkets, into its orbit. Maicai doesn’t feature group purchases like Pinduoduo yet, but the company believes it can still sell fresh groceries at competitive prices, since local groceries that come from nearby farms usually aren’t marked up as much as products from bigger retail chains.

Therefore, investors should see if Maicai locks in more shoppers over the next few quarters, and whether or not Alibaba and JD will respond with similar pick-up and door-to-door services. If not, Pinduoduo could carve out a defensible niche in local groceries.

Fri Nov 20 , 2020
East Forsyth’s Jacob Fletcher (left) and L.J. Whisnant played football this fall for Jireh Prep while living out of a hotel room in Charlotte. “It was kind of weird at first,” Whisnant said. “We didn’t know too many people and everybody was kind of quiet at the beginning. It was […]