Officers should have used “whatever powers were available” to allow people to go about their business, according to the former Home Secretary – Paul Grover/The Telegraph Paywall down Police have been criticised for failing to halt a demonstration intended to stifle the freedom of the press as Extinction Rebellion was […]

Police have been criticised for failing to halt a demonstration intended to stifle the freedom of the press as Extinction Rebellion was accused of crossing the line “from protest to planned criminality”.

The condemnation came as it emerged warnings the group – known as XR – was planning to target newspaper printworks were reported nine months ago.

David Blunkett, the former Labour home secretary, said the anarchic behaviour of the protesters should have been quashed quickly by Hertfordshire Constabulary, which apparently sent only six officers to the Broxbourne plant when the alarm was raised shortly after 10pm on Friday.

Asked about the failure of police to remove more than 100 demonstrators who had sat down in the road or chained themselves to infrastructure, Mr Blunkett said: “I think they’re mixing up historic debate about [union] picketing with protests relating to political issues, which can be dealt with through the normal democratic process.”

He said officers should have used “whatever powers were available” to allow people to go about their business.

Meanwhile, Richard Walton, former head of the Met’s Counter Terrorism Command and now senior fellow at Policy Exchange, said the group had shifted from mere protesters into organising “planned criminality, and should be treated as such.”

He urged police to get better at gathering intelligence to uphold the law and intervene “before such acts of criminality.”

“Their reticence to do so undermines our democracy and strengthens extremist groups like XR,” he said.

Ian Austin, a Labour MP, said: “The police should uphold the law, enable people to go to work and read the papers they choose.”

At around 10pm on Friday, nearly 200 activists targeted printing presses at Broxbourne and Knowsley near Liverpool. A small group held a demonstration outside another print factory near Motherwell in Scotland.

No warning about the demonstrations had been made with the local police. Within minutes staff at Broxbourne dialled 999. However,  Donnachadh McCarthy, XR spokesman at the Broxbourne demonstration, said only six officers attended at around 10.15pm.

A force spokeswoman said no intelligence about the protests was received. She refused to say how many police were initially sent or the total number eventually in attendance. She confirmed other southeast forces – including the Met – were summoned to help.

Hertfordshire’s Chief Constable Charlie Hall was informed and “immediately” went to headquarters. A total of 48 protesters were removed by mid morning on Saturday. There were 42 arrests.

Merseyside Police also refused to say how many officers went to the Knowsley presses after the 10.30pm alert on Friday.

Due to the smaller nature of that protest – there were 30 arrests – no neighbouring force was called in for support.

It is understood that no activists or organiser had been fined up to £10,000 for breaching rules meant to prevent gatherings of 30 or more people during coronavirus restrictions.

Although many protesters were seen wearing masks, there appeared little attempt to avoid close contact with fellow activists and police.

The action at the English plants led to severe delays for deliveries of the Daily Telegraph, the Daily Mail and News UK’s The Times and The Sun. In response, the Telegraph has removed the paywall making the online version of the paper free until Monday.

Despite claiming to be climate change protesters, many activists said they were against the perceived political stance of some newspapers.

One XR statement said the action was about racism, as well “immigration policy, the rights and treatment of minority groups and dozens of other issues.”

The shift was seen by many as making XR a political movement, rather than a campaign group.

Asked where Hertfordshire Constabulary stands on the right to protests versus freedom of speech, the force issued a statement which reads: “The rights to protest are well established in this country and we remain committed to facilitating peaceful protest and ensuring compliance with the law.”

XR plans to target the media began in October last year, said Mr McCarthy who also writes a column for The Independent.

A document obtained by a Sunday newspaper last December showed organisers spotted how “vulnerable” Broxbourne was because it had only one exit leading to a  busy road.

However, the demonstration planned for April this year was cancelled due to the Covid lockdown.

“The Great March for Truth & Blockade’ said: “The [Broxbourne] plant has only one exit road leading to the A10, which makes it very vulnerable to a mass blockade.

“This would block almost all national newspapers for the South of England from being delivered from this plant.

“The disruptive impact of the capital and entire south of the country waking up to almost empty newspaper stands would send a shock through the system, as a wake-up call to the seriousness with which the media needs to take the crises.”

They hoped to maintain the blockade for at worst 12 hours or run it “continuously” for three days of the weekend.

It concedes it would require “high-risk, arrestable, undercover operations”.

Perhaps ironically, it even suggests printing its own newspaper to fill empty newspaper stands.

Mr McCarthy, who was a co-author of that report, insisted he was not an organiser of the latest demonstration despite being at Broxbourne.

The emergence of the pamphlet came in a year when Scotland Yard was forced to spend £37 million on policing XR demonstrations.

This weekend’s demonstration far exceeded last year’s proposed plans, suggesting lockdown had provided an opportunity for organisers to gavlinise support and plan how to maximise their disruption.

Ian Murray, executive director of the Society of Editors, added: “Everyone has the right to peacefully protest and make their voices heard, after all that is what a free press is all about. But it is not acceptable for those who wish only their voices to be heard to attempt to silence others.”

Newsprinters condemned the protests as an “attack on all of the free press” which had affected workers going about their jobs, and others such as newsagents who face a “financial penalty”.

The Federation of Independent Retailers (NFRN) said the protests had hit home delivery operations, including for the “elderly and vulnerable”, with its members having to deal with “angry customers”.

Asked about the financial impact for newsagents, an XR spokesman said: “Sorry”.

Politicians from all sides condemned XR for launching what was seen as a blatant attack on freedom of speech.

Boris Johnson insisted a free press was “vital” to fight climate change because it encouraged debate about the issue.

His views were echoed by Carrie Symonds, the prime minister’s fiancée, who said despite being a longstanding environmental campaigner “preventing a free press to spread this message further is just wrong.”

Robert Jenrick, the housing secretary, said protesters were the  “intolerant minority” while fellow Tory, Tobias Ellwood, the group was alienating people from their cause.

Sat Sep 5 , 2020
Refinancing remains at the top of many homeowners’ to-do lists, and it has taken on more urgency as a new refi fee is expected to push mortgage rates higher this fall. A 30-year fixed-rate mortgage might be your automatic first choice. But if you’ve been in your house a few […] 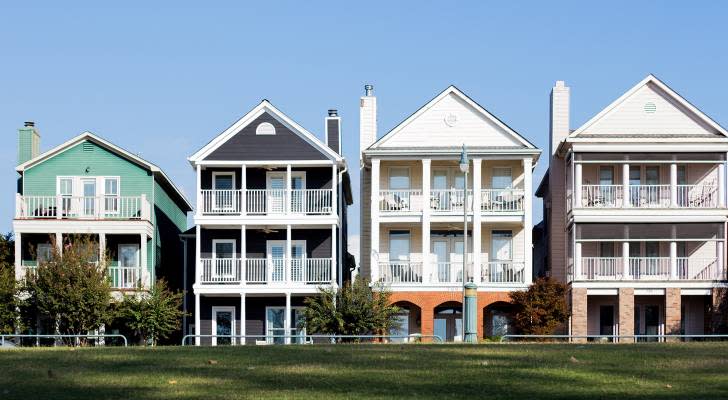