PRINCE GEORGE’S COUNTY, MD — Prince George’s County will not yet enter stage 3 of its coronavirus recovery effort, County Executive Angela Alsobrooks said at a Thursday morning news conference. Alsobrooks’ announcement came two days after Gov. Larry Hogan said that all Maryland jurisdictions can enter the third and final phase of his Roadmap to Recovery plan this Friday at 5 p.m.

Although Hogan will not force counties to relax their coronavirus regulations, the offer is theirs for the taking. All businesses have the governor’s permission to reopen, but only when their county approves.

“I can tell you that we are interested in the long game,” Alsobrooks said, noting that her team will reevaluate its position in a few weeks. “We are looking to make sure that whatever openings we make are ones that are sustainable and responsible, so we are taking our time.”

Alsobrooks said the county will remain in stage 2, where it has stood since June 29. She says Prince George’s is making progress toward the next wave of reopenings, but a few towns still concern her.

Thirteen ZIP codes still have positivity rates greater than 5 percent, which is the county’s target. This leads her to worry that reopening too soon could cause a third spike in coronavirus cases.

The county health officer, Dr. Ernest Carter, says Prince George’s squashed its initial outbreak, but Independence Day parties added fuel to a slowing fire. The county peaked at 2,418 new infections-per-week by May 2, but cases started to slow before the holiday.

New infections receded to 577 per week leading up to Independence Day. In the following six weeks, the county reported 805 to 988 new cases each week. That number has started to dwindle, but the health officer warns county residents that they must not let up, even though Monday is Labor Day.

“If we stay vigilant together, the road ahead can be a lot smoother,” Carter said. “If we don’t wear masks, if we don’t stay 6 feet apart and we are not smart about our personal gatherings this weekend, we might as well buckle up for another big surge.”

When Prince George’s County permits, movie theaters and live entertainment venues can reopen at 50 percent capacity. These businesses will only be able to host 100 people for indoor events or 250 patrons for outdoor gatherings, however. Until then, they remain closed.

Retail stores and houses of worship will operate at a 75 percent capacity, whenever the county moves into phase 3. They are currently capped at half their usual crowd size.

“I want to remind the people of Maryland that moving into stage 3 does not mean that this crisis is behind us,” Hogan said. “We must remain vigilant so we can keep Maryland open for business.”

Marylanders are steadily returning to work as restrictions ease. Since peaking at 10.1 percent in April, the state’s unemployment rate has fallen each month.

Now, 7.6 percent of the labor force is out of a job. In comparison, the unemployment rate was 3.3 percent in February, a month before coronavirus shutdowns began.

While Maryland still has a way to go before it reaches its pre-coronavirus economy, the state is still faring better than most of the country. The national unemployment rate sits at 10.2 percent, which is down from its recent high of 14.7 percent in April.

The overall unemployment stats are updated less frequently at the county level. The latest figures show that 50,098 people, or 9.5 percent of Prince George’s County workers, were without a job in July. That’s down 1.4 percent from the county’s pandemic-high, which it registered in May.

The number of new unemployment claims are updated each week, offering a more timely overview of county economies. The freshest report comes from the week ending Aug. 22.

“This has been devastating for so many of our businesses who have made sacrifices and seen losses,” Alsobrooks said, mentioning the 154,000 county residents who have lost their jobs during the pandemic. “We know that they are hurting.”

Alsobrooks added that the county has helped local businesses through its Economic Development Incentive Fund. The effort disbursed $20,190,000 to business owners, helping them pay their bills, compensate employees and buy personal protective equipment.

The county has awarded funding to 60 of the 670 applicants. More than half of the recipients have already received their grant.

The health officer understands how desperate many local businesses are right now. He used to own a business himself.

Carter owned retail clinics in four states before moving into the public sector. He bought those stores in 2007, just before the 2008 recession. The economic downturn nearly crumbled Carter’s business, so he empathizes with the struggles of local entrepreneurs.

“I have lived through that: Having to lay people off, and telling people they no longer have insurance or they don’t have enough money for child care,” Carter said. “I’ve had that experience with over 90 employees that I’ve had. And I can tell you I do not, as the health officer, want our county to suffer through that.”

Maryland has added 156,000 jobs since recovery efforts began, said Kelly Schulz, the secretary for the state Department of Commerce. She attributes the economic revival to the $175 million in grants and loans that her department sent to thousands of local businesses.

Safety remains a top priority for Schulz, who said her team has met with 13 different industries to develop safe reopening guidelines. That partnership involved leaders from the tourism, manufacturing, retail, dining and attractions sectors, among others.

The group assembled a list of safety recommendations specific to each field. The suggestions include staggering employees’ shifts to minimize potential coronavirus exposure and placing signs and barriers to aid social distancing. These tips are available in Maryland’s Back to Business portal.

“We’ve helped them keep their doors open, pay their bills and keep their employees on their payrolls,” Schulz said of Maryland business owners. “We have stayed strong during this pandemic, and we will remain vigilant. We are, in fact, keeping Maryland open for business.”

Masks are still required in all public places in Maryland where social distancing is not possible. This includes all outdoor and indoor areas like town centers, shops and restaurants.

Hogan reminded residents to continue their coronavirus prevention measures, even around their relatives. People tend to feel safer around their family, but they must still take precautions, Hogan said.

Coronavirus seems to spread quickly at family events. Since the middle of July, 41 percent of coronavirus patients interviewed by contact tracers reported going to family gatherings.

“You think it’s maybe dangerous to go to a restaurant or a bar or some business,” Hogan said. “But in fact, the No. 1 thing reported is family gatherings.”

Prince George’s County continues to have the most coronavirus cases in the state, and its metrics are higher than many Maryland averages.

The most recent data clock Prince George’s positivity rate at 4.68 percent, which is 1.27 percent higher than the statewide clip. The Centers for Disease Control and Prevention says municipalities should aim to keep their positivity rate below 5 percent. When counties hit this mark, Maryland health leaders say it is likely safe to return to schools for hybrid instruction.

Though Prince George’s County meets the positivity rate recommendation, school officials still plan to keep classes online until at least January of 2021. Prince George’s County Public Schools will re-evaluate the local coronavirus situation throughout the fall with hopes of offering a hybrid option for the second semester, which starts on Jan. 28.

The county fell under the 5-percent benchmark for the first time on Aug. 20, and it hasn’t slipped above the threshold ever since. The local positivity rate topped out at 41.98 percent on May 2.

While Prince George’s County meets the percent positive guideline, it does not meet the state’s new infections-per-capita marker. State health officials say jurisdictions should aim for less than five new coronavirus cases-per-day per 100,000 people. When an area hits this goal, the state says it is probably safe to reopen the district’s schools for expanded in-person learning.

The county must average less than 45.47 new coronavirus cases-per-day over a rolling week to meet the state’s per-capita suggestion. Prince George’s County has averaged 107.29 infections-per-day during the last seven reported days.

The county has the most coronavirus infections in the state, with 26,565. The virus has killed 774 county residents.

Fewer than 69 coronavirus patients have been in the hospital at a time since the week of June 21. More than 240 people were hospitalized in Prince George’s County on the pandemic’s peak during the week of May 3.

“It is critically important that we not become complacent with COVID-19,” Alsobrooks said. “I know that we have dealt with this for a long time and so many of us are getting restless, but as we approach this coming holiday weekend, I am urging all of you to please listen.”

Have a story idea? Please contact me at [email protected] with any pitches, tips or questions. Follow me on Twitter @JacobBaumgart and on Facebook @JacobBaumgartJournalist to stay up-to-date with the latest Anne Arundel County and Prince George’s County news.

This article originally appeared on the Bowie Patch

Thu Sep 3 , 2020
courtesy Danielle Cullen Jermaine Owens Jermaine Owens is the owner of North Fork Seafood and Shelter Island Seafood Market, a Long Island-based seafood company that sells fish to commercial customers and restaurants. After getting his start in the industry at a young age, Owens, 43, worked three decades as a […] 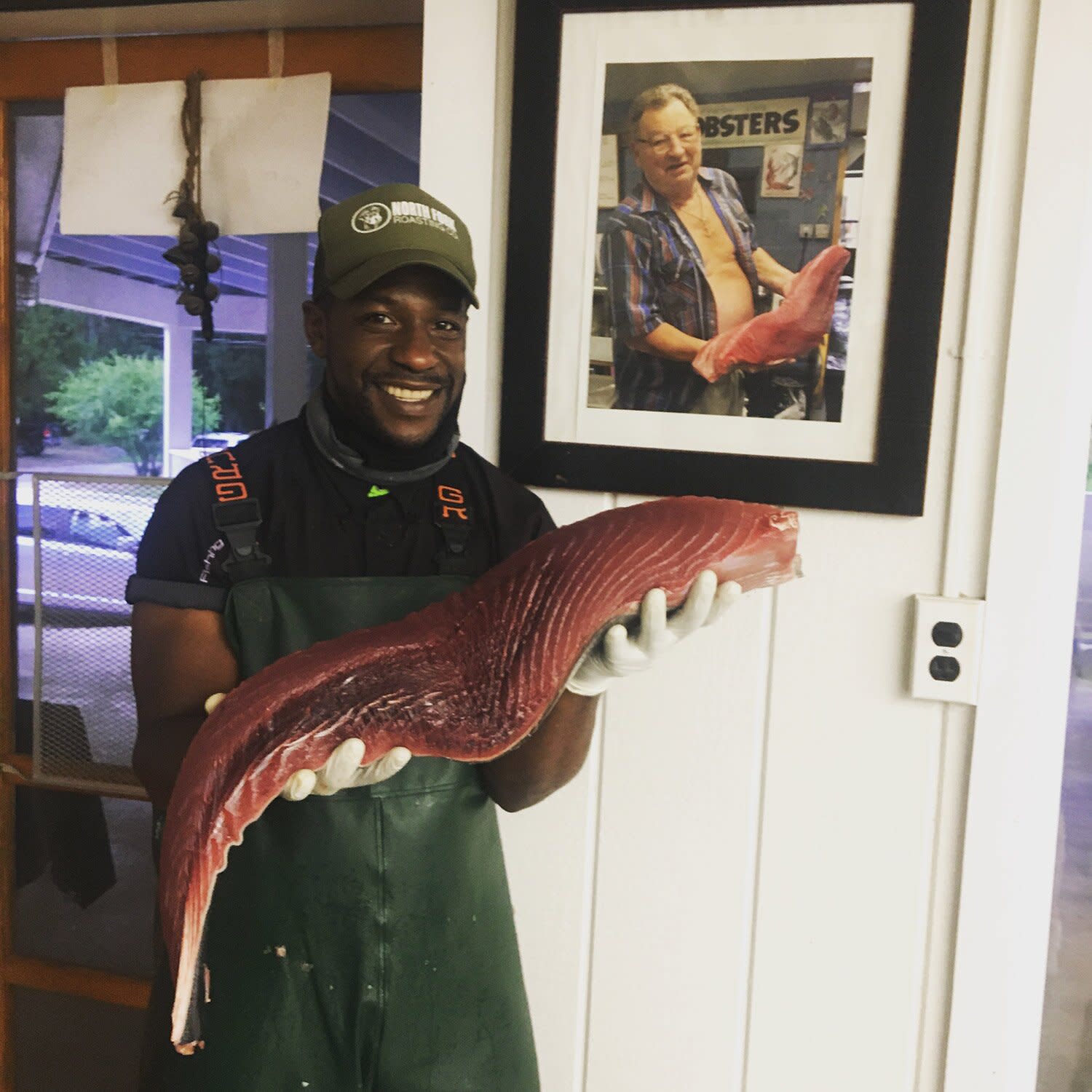