While it originated as the go-to hardware outlet for elite gamers — think sleek backlit keyboards, ergonomic mice that can be programmed for optimal massively multiplayer online role-playing gaming (MMORPG) — it has rapidly evolved into an ecosystem for the gaming experience. It has been into cloud computer gaming for a decade, added fintech services, payments, and software to the mix — all making the group essential to a gamer’s life.

The coronavirus pandemic has destroyed fortunes in most industries but for Razer, which is at the epicentre of the gaming world, 2020 has so far shaped up to be the most successful year yet.

Speaking exclusively to Yahoo Finance UK, Razer CEO Min-Liang Tan said that the group is the “stay at home stock” with the pandemic getting “gamers to be in their natural environment,” and therefore buying lots of gear and Razer Gold — a unified virtual credits system for gamers worldwide that can be used to buy games and in-game items, as well as be part of a loyalty rewards program.

It has led to users growing from 80 million to 100 million in just a year.

“This is particularly inspiring in spite of the hugely inflated logistics costs (since the pandemic) and we have beaten all expectations and turned profitable with $3.2m,” said Tan to Yahoo Finance UK.

Gaming has experienced a huge boom in 2020 due to the coronavirus pandemic forcing lockdowns, travel bans, and limited movement outside the house. E-sports, in particular, is seeing greater adoption from old and new fans alike.

E-sports is a form of sport competition using video games, often taking the form of organised, multiplayer video game competitions, particularly between professional players, individually or as teams. Even those who don’t play professionally are getting into the sport and even watching and consuming content of others playing.

E-sports are most popular in Asia, with 30% of viewers, 20% of e-sports viewers are in Latin America, 14% in Europe and MEA, respectively, and 13% in North America.

Uptake is greatest among Gen Z at one in four (27%) and stands at one in five (20%) among millennials.

Razer’s Tan says that while COVID-19 has presented an unprecedented time for gaming industry, he believes it’s the start of a long-term boon for the sector, rather than a powder keg moment.

“The way I see it, is a long term trend and the reason for that is while there is a short term boost as people are staying at home, even with countries opening up, those [gamer figures] still are remaining at an all-time high,” he said.

He points out that its building a whole new generation of gamers beyond those situated in Asia or in the Gen-Z or millennial bracket. Tan said that friends who he has tried to persuade to try out a number of games for years have moved from apathy to now being active players during the pandemic.

“Particularly in the first half of the year, all the metrics were through the roof and grew really quickly [to reach] 100 million users in 12 months — this is across all user activity demographics throughout the entire platform, from mobile and console,” said Tan.

China, which opened up earlier than other countries during the pandemic, showed that while there was some “normalising” in the figures, “it didn’t come down and still continues to grow.”

“This generation of gamers may be borne from the pandemic but they will remain and these numbers are very high,” Tan added.

But it’s not just in Asia — gaming activity in the US and Europe has “gaming activity up through the roof” he said, and in emerging markets, total payment volumes are booming.

A jewel in the crown for Razer’s innovations in recent years has been Razer Gold — a credit and payments system for gamers that makes it easy for them to spend their cash.

The company revealed that Razer Gold recorded a 125.9% year-on-year increase in total payment volume “driven primarily by the increase in the number of transactions.” It was helped by the fact Razer expanded its footprint further in this area, adding 600,000 channel touch points across new growth areas such as the Middle East and North Africa. Now the payments system covers users from more than 130 countries.

Razer has even moved into banking. In January this year, it announced that Razer Fintech submitted its application for a Digital Full Bank License to be issued by the Monetary Authority of Singapore and the award of digital banking licenses is anticipated for the second half of 2020.

“At this time, the Company is also exploring applying for digital bank licenses in other jurisdictions,” it pointed out in its statement.

Overall, Razer Fintech has generated $1.8bn in total payment volume in the first half of the year — an increase of 114.3% year-on-year.

But with all the success in branching out from just hardware — creating a real ecosystem for gamers — Tan says that acquiring content and streaming services is not on his radar.

“People call us a gaming company but we’re actually a ‘gamers’ company. The way we see ourselves, we are the middle-man giving gamers the best experience. We are never going to be in the content business and streaming services — our goal is to make these different services better and partner with companies like Tencent and Ubisoft to give the most immersive experience as possible,” said Tan.

“That’s where our cash balance goes — into our fintech side of the business.”

Tan pointed out that the company is now in a “comfortable” position — it’s profitable, despite all the challenges of logistics costs during COVID-19, has zero debt and $500m to play with.

He said that investments could come back in share buybacks, if the group think the company’s stock is undervalued, and also investing in areas where it sees further growth.

“I can give you a snapshot,” he told Yahoo Finance UK. “For the full-year 2020, we are expecting to add some cool new categories in hardware and there will be new launches in the second half of the year. Software is expected to have a massive boost as user activity continues [to grow]. There will be a lot more fintech and Razer Gold [is expected] to go through the roof. We will continue to see outsized revenue growth.”

“What we are going to do with the cash is invest in research and development and look into exploring new ways to reach out customers [and press cadence] in the absence of live events,” he added.

Razer, like many tech companies, used to have large scale events to launch new products and services and reached millions of people across the world with the excitement around these events.

Where he does see extra room for growth is in 5G.

5G is the next generation of wireless cellular technology that is being rolled out across the world. It promises to offer faster wireless internet speeds, greater network capacity, lower latency, and more flexibility.

“It is in early days, networks and devices are limited in areas and rolling out in 2021, but what I am excited about — if you take a step back — is outside of enterprise applications,” said Tan.

MSFT) and Xbox.”” data-reactid=”160″>“If you look at consumer level applications — very high bandwidth and low latency — there are two real advantages. [This is especially] for cloud gaming and that’s where we see a lot of intersection and where we recently sealed a partnership with Microsoft (MSFT) and Xbox.”

the US immigrant doctors dying of Covid

Wed Aug 26 , 2020
Dr Reza Chowdhury didn’t charge copays when his patients were low on cash. He gave them his home phone number and answered their medical questions at all hours. Once, when Chowdhury’s daughter, Nikita Rahman, struck up a conversation with a New York taxi driver, it turned out that he was […] 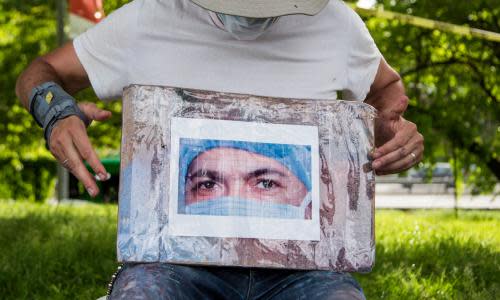