Online donors poured a record $392 million into campaigns and causes via ActBlue in June, a sign of surging activism and political enthusiasm on the left that smashed the previous monthly high, from just before the 2018 election, by a whopping 50 percent. The eye-popping numbers on ActBlue, the favored […]

Online donors poured a record $392 million into campaigns and causes via ActBlue in June, a sign of surging activism and political enthusiasm on the left that smashed the previous monthly high, from just before the 2018 election, by a whopping 50 percent.

The eye-popping numbers on ActBlue, the favored digital fundraising platform for the Democratic Party as well as a growing host of left-leaning nonprofits, make for a startling split-screen next to Great Depression-level unemployment and spiking coronavirus cases across the country.

But the left’s online giving surge is blunting one of President Donald Trump’s remaining advantages in the presidential election, as his poll numbers sink: his financial edge. Small-dollar donors are filling up Joe Biden’s campaign coffers, giving Democratic Senate and House candidates a financial cushion in many of the biggest 2020 elections, and pouring resources into newly emboldened civil rights organizations, which are scaling up rapidly amid rising support for the Black Lives Matter movement.

ActBlue processed nearly $25 million in donations on the final day of June, as Biden and other Democratic candidates pushed their email lists to deliver a big end-of-quarter fundraising haul, according to the live fundraising ticker on ActBlue’s website. It would have been a record day for the service — but for an enormous surge of ActBlue donations in the first four days of June, over $115 million, at the height of the protests over the death of George Floyd, a Black man killed by a Minneapolis police officer.

The money flowing through ActBlue has been a less visible piece of the summer of activism — but no less tangible, fueling everything from bail funds for protesters to think tanks promoting police reform, as well as Democratic political candidates.

“The world has never felt more perilous, so if you’re feeling powerless, don’t know what to do, a simple way to have an impact is to contribute,” said Taryn Rosenkranz, a Democratic digital fundraising consultant. “Open rates on emails are still continuing to surge, click rates are higher, average gifts are higher. Everything that should be going in a different direction for this economic moment is actually going up.”

Fundraising consultants and Democratic donors expect June to mark Biden’s strongest totals to date — “bigger than May,” when he posted brought $80 million, said Tim Lim, a Democratic strategist and a former member of the national finance committees for President Barack Obama and Hillary Clinton.

On Wednesday evening, President Donald Trump and the Republican National Committee announced that they jointly raised $131 million in June, a significant jump over its recent monthly totals. They also said they brought in $266 million during the second fundraising quarter, as well as sitting on $295 million in cash on hand — a financial edge Trump and Republicans have consistently held over Democrats.

“Even though Trump raised a big number in June, I fully expect [Biden and the DNC] will be close or higher,” Lim continued. Biden topped Trump’s fundraising by just over $7 million in May, the first month when Biden could jointly fundraise with the Democratic National Committee, matching a similar agreement that Trump has with the Republican National Committee.

“Donald Trump is the single greatest fundraising tool that Democrats have ever had,” said Tara McGowan, co-founder of ACRONYM, a progressive nonprofit. “There’s probably a strong correlation between how Americans are experiencing this crisis right now and how they feel about the stakes of this presidential election.”

Biden’s campaign, in an email to supporters, said it had topped 3 million online contributions in the second quarter, “double the amount we received in the first quarter this year.” Based on individual donors disclosed in April and May, according to the Federal Elections Commission filings, that puts Biden’s individual donor number for June above 1.2 million, a big one-month leap for the former vice president amid economic and social turmoil.

“We know that June was a difficult time for many,” the Biden fundraising email continued.

Groups focused on criminal justice and the Black community — including Black Lives Matter and Color of Change — also saw an enormous influx in cash during the multi-week protests following Floyd’s death in Minneapolis. Totals raised by some nonprofits may not be available until later this month at the earliest, but IRS documents filed by ActBlue last month show the early effects of the surge that started in May. The IRS disclosure shows that Color of Change, for example, raised over $1.3 million via ActBlue in May after garnering just a few hundred thousand dollars from the service in the previous four months of the year.

The amount of money flowing into those Black-led groups is “revolutionary,” said Steve Phillips, a Democratic donor and the founder of Democracy in Color.

“There’s been a lot of gatekeepers – white gatekeepers – of big dollars that have been bypassed by all this small-dollar giving,” Phillips said. “It’s remarkable to watch mainstream philanthropy really become irrelevant in this moment.”

In the presidential campaign, Biden’s cash ballooned in June thanks, in part, to his featured headliners. In late June, Obama hit the virtual campaign trail alongside Biden, raising a combined $11 million from a pair of grassroots and high-dollar fundraisers. Biden has also leaned on former opponents for the Democratic presidential nomination, including current running mate options: In June, Sen. Elizabeth Warren helped him raise $6 million, while Sen. Kamala Harris brought in over $2 million from single events.

Biden bundlers are already preparing to cover the costs for a presidential transition, too. Earlier this month, Biden formally launched a transition team, led by Delaware Sen. Ted Kaufman, a longtime Biden adviser.

A memo obtained by POLITICO showed that donors are soliciting $5,000 contributions, “to raise sufficient funds to prepare for a core transition team.” (The memo urged givers to keep the effort “quiet” so “we do not distract attention from the core task of winning the election.”) The New York Times first reported the transition fundraising overtures.

The financial machine boosting Biden stands in sharp contrast to his primary campaign, when he struggled to keep pace with Democratic rivals and had little digital fundraising infrastructure to lean on.

“They’ve definitely put the foot on the gas,” said Julia Rosen, a Democratic digital consultant who led digital strategy on Andrew Yang’s presidential campaign. “They were a very lean campaign to start, and they’ve added digital staff and they’re spending a lot more on Facebook and other properties.”

Thu Jul 2 , 2020
South Dakota Gov. Kristi Noem told Fox News on Tuesday that people will “not be social distancing” at a planned Friday celebration at Mount Rushmore, which President Donald Trump is scheduled to attend ahead of Independence Day. A website for the event estimates about 7,500 will be in attendance and […] 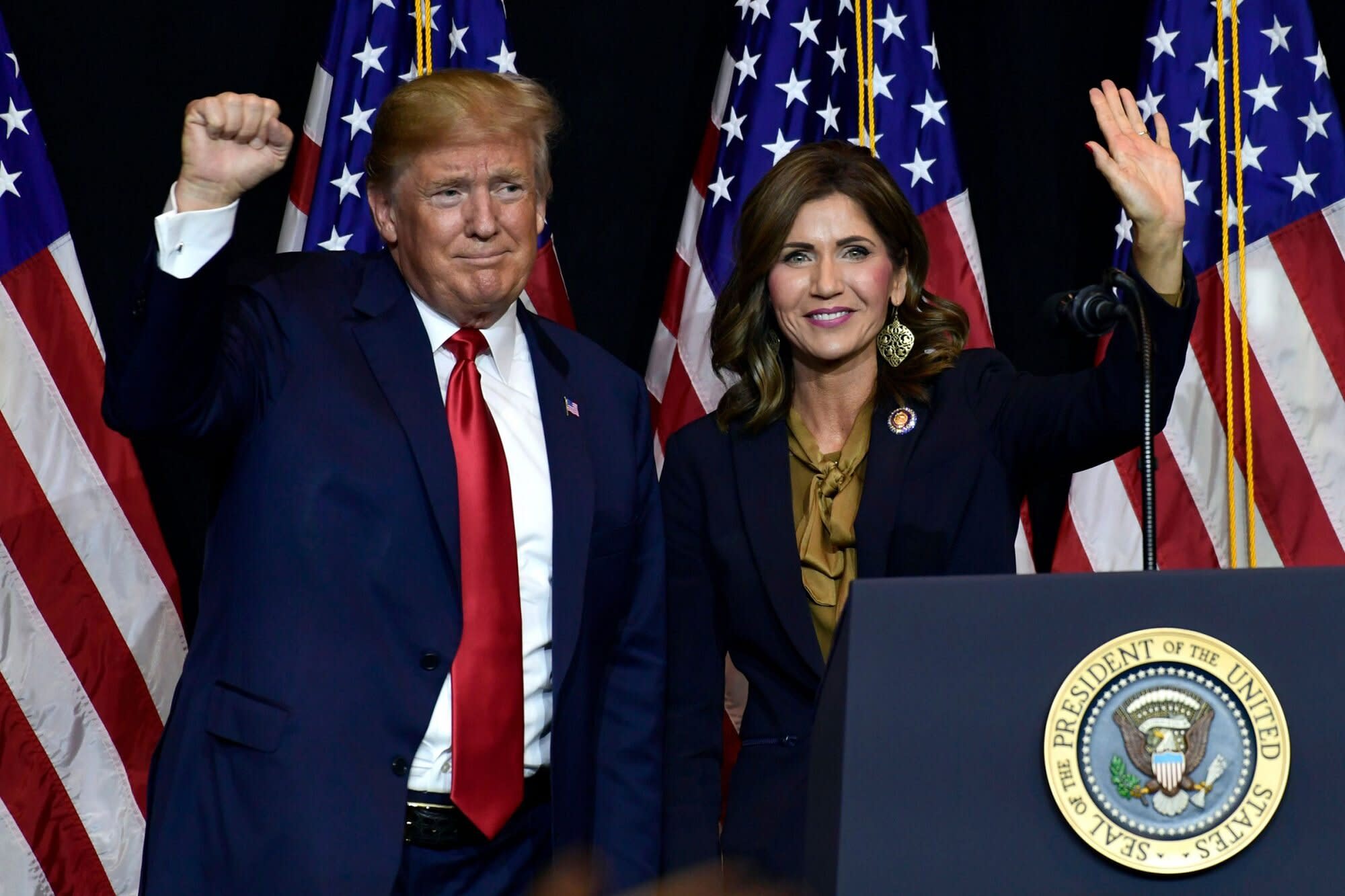