Democrats think it’s dangerous and unnecessary. Republicans consider it safe and essential. And both agree that, when it comes to in-person voter communication, neither side has ever experienced a dynamic like the one in this election. The ongoing coronavirus pandemic has created a stark divide in the way the ideological […]

And both agree that, when it comes to in-person voter communication, neither side has ever experienced a dynamic like the one in this election.

The ongoing coronavirus pandemic has created a stark divide in the way the ideological left and right have chosen to campaign this year, with liberals all but abandoning the traditional political tactic of sending staffers and volunteers door-to-door to talk with voters at home — commonly known as canvassing — while conservatives continue to do so with only relatively minor interruptions.

The split is emblematic of a wider divide between the two parties during the pandemic that has affected how they regard everything from mask mandates to travel restrictions. And in the view of veteran political operatives, it has also created a unique set of circumstances for the final eight-week stretch of the 2020 election that could have a bearing on the eventual outcome on races up and down the ballot, in which Republicans engage in a tried-and-true method to persuade and turn out voters, while Democrats put their time and energy into alternative, safer efforts.

“We’ve had campaigns do different things before, but usually because of innovation,” said Eddie Vale, a longtime Democratic strategist. “We’ve never had a situation where the two sides run different campaigns because of a public health crisis.”

Whether a voter canvassing operation conducted during a pandemic will significantly affect final vote tallies is a subject of intense debate — particularly among Democrats, where party operatives say they are under pressure to win every vote possible in an election they consider the most important of their lifetimes.

In some cases, progressive leaders even say they still have plans to launch a door-to-door voter contact effort in several key battleground states where the number of COVID-19 cases has abated in recent weeks.

But over the summer, a time when canvassing operations traditionally begin in earnest to build relationships with targeted voters, national Democratic-aligned groups almost universally halted doing so.

That includes Joe Biden’s presidential campaign, Democratic House and Senate campaigns, and ideological allies like the union AFSCME or liberal grassroots groups like Indivisible. One outside group, the Progressive Turnout Project, attempted to start its canvassing campaign in June, before bowing to internal pressure that the process put employees and voters alike in danger.

Many progressive leaders struggled to name any major national organizations on the left engaged in canvassing and said that, by and large, their supporters understood that doing so was a bad idea at this time.

“Our base very much understands the thinking behind it and the rationale,” said Leah Greenberg, Indivisible’s co-founder. “Folks can still obviously canvass directly with some campaigns, but generally speaking for independent groups, they’ve been able to move their communication online, move them through phone banking processes with us.”

The approach is very different on the right. President Donald Trump’s campaign, in conjunction with the Republican National Committee, began canvassing again in June, said officials with the re-election effort.

A House-GOP aligned super PAC, Congressional Leadership Fund, said last week that it had begun a door-to-door effort in key districts. And Americans for Prosperity Action, a free-market group founded by billionaires Charles and David Koch, started returning to voters’ doors on a preliminary basis at the start of June.

The absence of so many groups is evident in neighborhoods that would usually draw heavy interest from both sides, said AFP president Tim Phillips. He recounted how last month, he spent nearly half the day going door to door in a North Carolina neighborhood and didn’t encounter any liberal canvassers, an experience he deemed “a little weird.”

“Normally you’re running into other groups,” Phillips said. “You have an AFSCME or an SEIU or (Tom) Steyer’s groups or any one of a ton of groups.”

“There was nothing like that,” he added. “We’re just not running into that kind of competition this year.”

Phillips said his group, which has endorsed a slate of Republican congressional candidates but not Trump, deployed only its staffers, and not volunteers, in the month of June, in an effort he said was used to make sure the process would be safe. By July, the group had ramped up its operation to include dozens of people, staff and volunteers alike, in key battleground states like and Georgia who walked door to door advocating on behalf of those states’ incumbent GOP senators.

Phillips said the campaigners are taught to knock on a door and step as far back as eight to 12 feet afterward to maintain safe social distancing while they speak with a voter at their front door.

AFP mandates its members use protective masks in states and municipalities that require them, but Phillips said volunteers and employees are free to not wear them in places that don’t. He declined to say if anyone from AFP has tested positive for COVID-19 since the beginning of the canvassing program.

Phillips said he’s convinced the process is not only safe but essential politically, because in his view, there’s no replacing face-to-face communication with voters.

“We spent years, literally years, building a local community-based grassroots infrastructure, and one of the reasons you spend so much time and money is for moments like this,”he said. “And so of course we’re going to use it.”

Phillips declined to say whether he thought Democrats and liberal groups were making a mistake in not orchestrating canvassing programs.

But other Republicans argue the decision will cost the other side votes.

“To me, that’s just an excuse,” said former Wisconsin Gov. Scott Walker, who added that he thinks canvassing involves less person-to-person contact than going to a grocery store. “And if they’re honest about it, then like I say, they should be advocating that the whole state should be shut down, and we shouldn’t go out to any of the places that we go out to now.”

Democrats acknowledge that, absent a pandemic, avoiding voter canvassing would hurt their chances.

But they said at a time when voters are worried about contracting the virus, sending people to their front door risks backfiring politically, sending a message that the GOP is cavalier about their personal and the public health.

“That’s more evidence that they’re not taking seriously the health considerations of the pandemic,” Indivisible’s Greenberg said. “And I think that reinforces a message that is quite central, which is we’re in a terrible state, unlike any country in the world, because Donald Trump did not take this pandemic seriously.”

Greenberg noted that Trump saw his support tumble at the end of spring, rooted largely in the perception that he was dismissive of the pandemic’s lethal effects and did not take decisive action to fight it. And throughout the pandemic, the public is often overwhelmingly in favor of taking protective measures for their health over reopening many public and private spaces, part of a clear preference for the more cautious approach.

Some Democratic strategists also say that investing in an extensive canvassing program is always inefficient, with canvassers walking door to door in the same amount of time someone working on a phone bank or text messaging program could contact a half-dozen potential supporters. At a time when the virus is making Americans even less willing to talk to someone face to face, the inefficiency grows intolerable.

“You can’t knock enough doors at a time when people are scared to even talk to you because of COVID-19,” said Chuck Rocha, a senior adviser to Bernie Sanders’ 2020 presidential campaign. “What you’re doing is running a very expensive mail program because you’re just leaving a piece of literature at the door when you walk away.”

Still, some Democrats privately say that they’re nervous that abandoning the tactic through Election Day could cost votes, especially in down-ballot races where margins are thinner and candidates have fewer financial resources to run TV and digital ads.

“There is a widespread worry it is going to cost us seats,” said one veteran Democratic strategist, who requested anonymity to speak candidly. “I don’t hear people saying it’s going to cost us the presidential election. But I know there is concern it will cost us state legislative seats.”

The strategist, who personally doesn’t think canvassing programs should continue for health reasons, said that some party operatives and donors were pushing to restart the campaigns. The feeling is not widespread, the strategist added, but pervasive enough that it could influence some groups.

Officials with the Biden campaign have said recently that although they have no immediate plan to resume face-to-face communication with voters, they will soon begin dropping off election pamphlets at voters’ homes while they monitor the public health situation in key battleground states.

Another group, however, is taking their plans a step further. Leaders at Working America, the political arm of the AFL-CIO, said they think they are close to starting their canvassing program in places where the COVID-19 cases have significantly abated.

The group, which like many labor organizations considers door-to-door campaigns the lifeblood of their electoral efforts, did not conduct its program over the summer, even pushing back plans to restart it after July 4th when coronavirus cases began to surge in many states.

“I don’t have news to break on that today, but things are certainly improving in specific parts of the country,” said Matt Morrison, Working America’s executive director. “Almost every state is looking better than it was.”

He said the group could make an announcement in a matter of weeks.

Tue Sep 8 , 2020
Supermarket chain Morrisons is to make thousands of temporary staff permanent as a surge in demand for online deliveries fuelled by the coronavirus pandemic continues. Iceland also says that it has taken on thousands of staff. Rivals such as Tesco are hiring more staff to support internet shopping after the […] 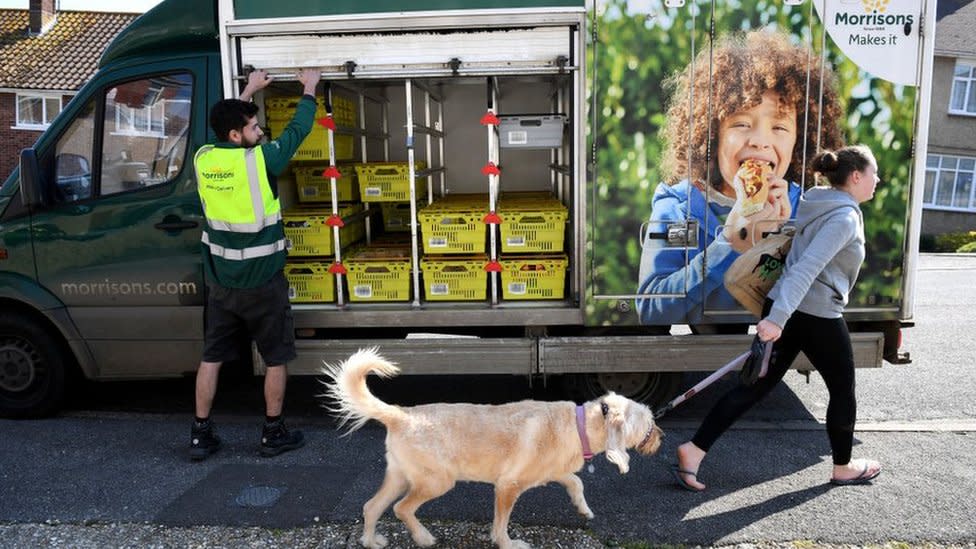