A fundamental disagreement has prevented Congress from reauthorizing the extra $600 in weekly unemployment benefits that lapsed last week.  Treasury Secretary Steve Mnuchin, the Trump administration’s lead negotiator for a new relief bill, said Sunday that he and his fellow Republicans agree on the “concept” of enhanced unemployment, but they […]

A fundamental disagreement has prevented Congress from reauthorizing the extra $600 in weekly unemployment benefits that lapsed last week.

Treasury Secretary Steve Mnuchin, the Trump administration’s lead negotiator for a new relief bill, said Sunday that he and his fellow Republicans agree on the “concept” of enhanced unemployment, but they “want to fix the issue where in some cases people are overpaid and we want to make sure there’s the right incentives.”

In other words, Republicans believe the extra $600 is too good, and it’s creating a disincentive for workers to go back to their jobs ― meaning it’s burdening low-wage employers, who would have to raise their pay to compete with the benefits.

Democrats think the extra money is appropriate, since it reduces material hardship while allowing people to stay home and avoid being exposed to or spreading the coronavirus. For many workers, the extra jobless benefits do pay more than what they earned at their job but, the Democrats say, the pandemic itself is so thoroughly wrecking the economy that it’s okay if a fraction of the workforce is temporarily able to to get ahead of the game in paying bills.

Most people who’ve lost their jobs over the past few months, after all, have actually been on furlough, with the expectation they would return to their jobs eventually. The proportion of unemployed workers who are on temporary layoff is historically unprecedented. In June, nearly 60% of job losers expected to return to their jobs within six months, down from 79% in April. Many simply do not have the option of returning to work just yet.

One of them is Thomas Cail, a career bartender who served drinks at the Ruby Tuesday in the Orlando International Airport for six years until the restaurant shut down in March.

Business travelers were Cail’s bread and butter ― people on work trips, armed with green American Express corporate credit cards who never flinched at airport prices. It didn’t even matter what time of day.

“Everybody loves airport bars,” Cail said in an interview. “All the rules go out the door.”

But no matter how much people may love airport bars, they’re not going to airports right now, and they’re not stopping by Ruby Tuesday for that 7:30 a.m. eye-opener. Air passenger volumes are still down by more than two-thirds compared to last year. Ruby Tuesday’s remains closed at the Orlando airport.

Republicans think they can help the economic woes afflicting restaurants by tinkering with incentives. The latest coronavirus relief bill unveiled by Senate Majority Leader Mitch McConnell (R-Ky.) included a provision that would allow businesses to write off the full cost of meals, instead of just half the cost as under current law. With that tax advantage in hand, a company would be more inclined to tell its executives to go ahead and use their company cards to dine out.

“We know that more than 5.5 million restaurant workers lost their jobs as the pandemic hit, and while some of those jobs have been recovered, it is clear more help is needed,” Sen. Tim Scott (R-S.C.) said of the provision. Its major proponents include President Donald Trump, who has frequently touted it in tweets.

Like the rest of the Republican bill, the status of the business meal deduction is unknown as party leaders hold secret meetings to resolve divisions among GOP lawmakers and hammer out a broader relief bill.

Cail said the extra $600 has been a lifeline for him for the last four months. He hasn’t been thriving, but he has been surviving ― making rent, car and utility payments, with plenty of food in the kitchen and the occasional takeout order. Thanks to his union, he said he had health insurance until last week.

“I know my job will return. I just don’t know when,” he said. “I will return when called. I need to work. I need health insurance. I need to feel useful.”

If Congress replaced the extra $600 with $200, as the recent Senate Republican bill proposes, Cail said he would probably have to sell his car and file for bankruptcy protection to get by.

The most important obstacle to Cail returning to work is still the pandemic itself. He needs air travel to pick up to enable his employer to reopen. He could look for another job, of course, but he has well-founded doubts about his prospects in a local labor market with 16.5% unemployment, bars closed by government order, and ongoing waves of layoffs. Even before the pandemic, finding a job wasn’t easy.

“I’m a high-school-educated, lifelong 48-year-old bartender,” he said. “I’ve applied at more hip, trendy wine rooms and gastro pubs in the city and have never had a callback.”

When Congress created the extra $600 benefit in March, it set the benefits to expire at the end of July. Lawmakers also created a massive small-business rescue program designed to cover just two months of payroll costs. Lawmakers did not anticipate how long the pandemic would last. And even at its start, some Republicans said they thought the extra jobless pay would only make things worse.

“We don’t want to delay a recovery from this crisis by four months,” Sen. Ted Cruz (R-Texas) said during the Senate’s floor debate in March. “Hopefully, we stop this global pandemic, and we stop it soon. You don’t know how soon that will be. I don’t know.”

The federal government has utterly failed to stop the pandemic, thanks partly to Trump prematurely encouraging states to reopen. And the economic recovery could stall out thanks partly to the demise of the extra benefits, which has slashed incomes for more than 25 million people.

By itself, the enhanced benefit of $600 per week works out to $15 an hour for a 40-hour workweek, meaning laid-off workers are receiving nearly double the federal minimum wage on top of their state unemployment benefits, which vary widely but pay less than $400 on average.

Since the extra benefits lapsed, Republicans haven’t coalesced around a single proposal to replace them. In the past, Congress hasn’t added more than $25 to state benefits. The McConnell package would pay $200 for two months and then ask states to adjust the federal benefit to 70% of a worker’s’ previous wage ― though it’s not clear if beleaguered state workforce agencies are up to the task of quickly making such calculations. Some GOP lawmakers say they would be happy with no replacement for the extra jobless aid.

Although Republicans have hyped stories about employers struggling to bring back workers because of the higher benefits, little evidence has emerged that this problem is so widespread that it’s held back hiring on a large scale. People who refuse job offers typically lose their benefits, and of the several million benefit recipients who returned to work in June, 70% did so even though their job pays less.

“I think they’re making the calculation that they’d rather work and try to secure a place with an employer rather than rely on temporary unemployment insurance increases,” said Josh Bivens, director of research at the liberal Economic Policy Institute.

For some workers, their best chance of security may be to remain unemployed until their job can come back.

Shawn Pennington, 45, is the stage manager for the national tour of a Broadway musical. Theaters are closed across the country, and Broadway itself will remain shuttered at least for the rest of 2020.

Pennington said he started as an actor 25 years ago, and in recent years has been able to save money and even buy a house for his parents. He is receiving far less compensation on unemployment than he did working.

“It’s so frustrating when you hear the big talking point that all these people are sitting around not going to work because they’re making more money than they were before,” he said. “For us, there are no jobs to go back to.”

Pennington estimates he could last six months without the extra $600 before he starts going into debt. He’s splitting his time between family members in California and Arizona until shows can resume.

He’s hoping he can hang on to his career until then. It really depends on the coronavirus getting under control.

“We can’t come back until not just us, but audience members feel safe enough,” he said. “I think it’s arguable we will be the last thing back.”

Diane Sullivan, Blake Krueger and Joey Zwillinger Reveal the Challenges of Leading During a Pandemic

Tue Aug 4 , 2020
FN’s first virtual summit, “The Way Ahead,” kicked off this afternoon with a candid conversation between four key footwear industry leaders, who talked about how they and their companies have responded to monumental challenges this year. The panel included Diane Sullivan, CEO, president and chairman of Caleres; Allbirds co-founder and […] 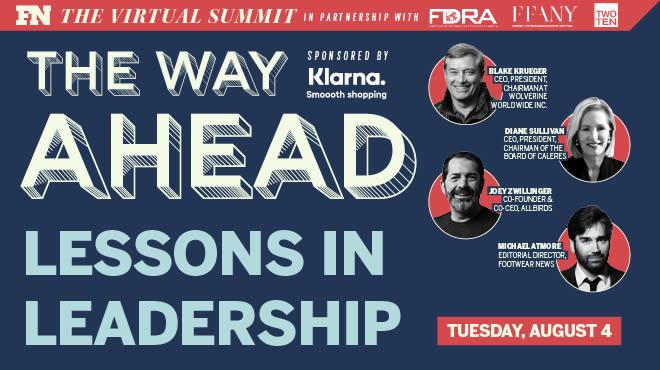