A woman on her laptop appears to be stressed during the coronavirus pandemic on May 30, 2020 in Rotterdam, the Netherlands. The woman pictured is not associated with the story. Robin Utrecht/SOPA Images/LightRocket via Getty Images As coronavirus measures force people to stay home and social distance, more people are […]

Nothing is wrong with an adult sharing private images consensually.

In fact, 43% of women and 27% of men in the UK have sent a private or sexual image, according to a recent report published by Refuge. Now, as coronavirus measures are forcing people to stay at home and more couples to do long-distance relationships, this number is set to rise.

But while sending nudes is an increasingly common part of modern dating, it also comes with certain risks.

“The lockdown produced an extreme set of circumstances which are bringing a lot of problems,” said David Wright, director of the UK Safer Internet Centre, according to the BBC.

“What we are seeing here, however, suggests something more long-term has happened which could mean we will be busier than ever before. It’s worrying to think this could be the new normal,” he added.

Insider spoke to digital privacy advocate Jo O’Reilly to discover some of the best ways to stay safe when sharing intimate images with your partner online.

With so many platforms at our fingertips, it’s easy to send pictures without thinking about where your data goes.

“If you’re going to send anything that you don’t want anyone else to see, you want to be careful of what platform you’re using,” said O’Reilly.

The privacy advocate suggests apps such as Signal, Telegram, or even WhatsApp, where you can send messages, pictures, or videos without a third-party reading what is sent.

While many young people use Snapchat and Instagram to send pictures these days, it is important to note that these services are not encrypted. People can always freely screenshot content — sometimes without you even knowing.

2. Be aware of where you’re storing your images

Before sending your images, always make sure you know exactly where you’re saving them.

Cloud hackings are common, as witnessed back in 2014 when various (mostly female) celebrities had nearly 500 private pictures leaked on public websites.

“Check that you are not saving stuff by default to your Cloud from your phone. It’s not something that a lot of people always check,” O’Reilly suggested.

If you have an iPhone, check your storage settings by going on Settings > Photos & Camera. From there, you’ll have the option to enable or disable three different iCloud services. Read the descriptions of each service carefully before you choose to turn it on.

If you have an Android device, open your Google Photos app and tap the menu icon in the top left corner. Then, go to Settings > Back up & sync and disable the automatic backup feature.

To be safe, you should also check your iCloud or Google Photos account online and delete any photos you may have accidentally synced to your devices.

“Your phone might be very secure, it might have a passcode, a biometric face ID, it might need your thumbprint but getting into your iCloud via another device might be easier than you think,” O’Reilly added.

3. Have a conversation about security with the person you’re sending your picture to

Unfortunately, securing your device isn’t enough — it also depends on the person you’re sending the pictures to.

“Sadly, the risk is nearly always the person you’re sending it to. But this is not necessarily intentional — you might take your phone security very seriously but the partner you’re sending to might not,” said O’Reilly.

Privacy advocate suggests having an open and honest conversation with your partner before sending anything. Ask them questions like where your pictures will be stored, whether their iCloud settings have been checked, or whether they will delete your picture if you ask them to.

4. Ask yourself whether you actually trust the person you’re sending pictures to

Although this might seem like very obvious advice, it is probably the most important of all: if you don’t trust the person, then don’t hit ‘Send.’

“This can be difficult because you never know what people are capable of until it happens, unfortunately,” said O’Reilly. “Making sure you really do trust someone and that you’re kind of invested in the build-up to the relationship is always important.”

One red flag to look out for in particular is whether or not the person you’re sending pictures to is pressuring you to send them, O’Reilly added.

“Really make sure if it something you want to do and that you’re not coerced into doing it,” she said. “Of course, that’s not 100% fool-proof. Plenty of people consensually share images in good faith and they can be shared against their will.”

5. Be aware of your surroundings when you take the pictures

When deciding on the photo you’re planning to send, be aware of details, such as the background or whether your face can be identified.

“This includes showing off any recognizable tattoos or birthmarks you might have,” added O’Reilly.

The place you’re taking the picture from can also be vital.

“Never send a nude from your place of work where there’s a company logo in the background, for example,” said O’Reilly. “Might seem like straight-forward advice but it can be particularly damaging.”

“If you work in some kind of profession where you think this could have a really big impact like a lawyer or a teacher for example, then you need to be extra careful,” she added.

What happens if I do end up becoming a victim of image-based abuse?

If you do find out that someone has been sharing your private images without your consent, O’Reilly suggested trying to understand as much as possible about what’s happened first.

“If you know for sure that the person is sharing these images maliciously then go straight to the police,” she said. “That’s obviously easier said than done and it takes a level of bravery, but it is a strong option.”

“If you think it was accidental, one option would be to reach out to the person you sent the pictures to, to figure out whether it was a mistake or ask them to remove it,” O’Reilly added.

“Don’t panic, you’re not alone and there is help available,” the manager of the helpline, Sophie Mortimer, told Insider.

“Make sure you reach out for personal support as your wellbeing is the priority. Then save evidence: screenshots messages and content, save links,” she added.

Most importantly, you should know that you’re not alone and that you are not to blame for becoming a victim, both experts said.

There’s nothing wrong with sharing intimate images if that’s what you want to do, but it’s a good idea to make sure you’re aware of the risks and have done what you can to offset them,” said Mortimer. “Have fun, but stay safe.”

Is Covid to blame for business closures or is it helping new startups? The answer is both

Sun Sep 27 , 2020
InvestorPlace 7 Sin Stocks To Buy That Will Outperform the S&P 500 While the S&P 500 and a wide range of stocks continue their September slide, many investors are understandably jittery, wondering if a second market crash is coming this year. In response, they’re searching for industries that can offer […] 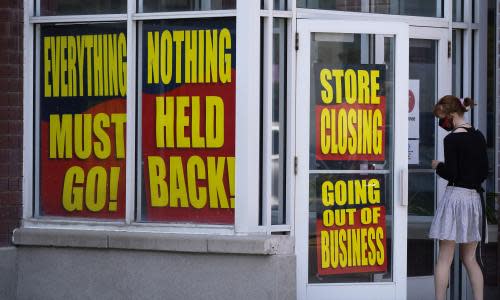