Time froze for girls and women across the nation Friday night as millions learned that Supreme Court Justice Ruth Bader Ginsburg – the second woman in U.S. history to sit on the high court – had died of complications from pancreatic cancer. For many, it was the loss of a hero, an icon and […]

Time froze for girls and women across the nation Friday night as millions learned that Supreme Court Justice Ruth Bader Ginsburg – the second woman in U.S. history to sit on the high court – had died of complications from pancreatic cancer.

For many, it was the loss of a hero, an icon and a champion.

Vanessa Cantley was at her son’s first high school football game in Louisville, Kentucky, on Friday night when she got an alert on her phone.

“My heart just stopped, and I started to cry, which was notable for me because I’m 43 years old, and I’ve never cried over the death of a public figure or a famous person – somebody I didn’t know personally,” Cantley said. “I guess I always sort of had in the back of my mind that she might live forever because if anybody could do it, she could.”

Cantley organized a small vigil for Ginsburg on Saturday morning, where about 20 people talked about what Ginsburg’s life meant to them. “I’m a practicing attorney and also a mother of two, so she’s truly a trailblazer for me,” Cantley said.

USA TODAY spoke with girls and women across the nation about the impact of Ginsburg’s life and work on their lives, and how her grit, intellect and compassion inspired them.

‘A leader of all humanity, not just women’

Once one of nine women in a law school class of 500, the nation’s preeminent litigator for women’s rights founded the Women’s Rights Project of the American Civil Liberties Union and argued six cases before the court on which she would one day sit, winning five. Ginsburg pursued a new legal strategy in gender discrimination cases, finding male plaintiffs to challenge laws that discriminated “on the basis of sex.”

As an associate justice, Ginsburg authored the 7-1 ruling that opened the doors of the Virginia Military Institute to women. She voted with the majority to strike down state laws banning same-sex marriage and saved President Barack Obama’s Affordable Care Act for the second time. And she became the first justice in history to preside at a same-sex wedding ceremony.

“She was a role model for women, but more important also men have taken note and learned from her life and leadership,” Ojermark said. “This morning, as I watched people paying their respect, there were many men among those through. She was a leader of all humanity, not just women.”

Yvonne Joyner, 58, who lives outside Philadelphia and runs an art group in Brooklyn, New York, said she had been thinking about Ginsburg this week, keeping up with news of her receiving the Liberty Medal from the National Constitution Center the night before her death. Joyner was coming from the grocery store with a bottle of wine for a night in when she saw the report on TV.

“I just sat there and, some tears kind of fell, and I sat there in shock, thinking – what’s going to happen now? Not just politically, but all the things she stood for that were so important. Who is going to embrace everybody now?” Joyner said. “It was too much. To be honest, I was kind of in shock.”

Joyner said she immediately started a group chat with her daughters and stepson and planned a time for them all to talk.

“Oddly enough, it was my stepson who proclaimed the loudest pain,” Joyner said. “I think that she was standing up in that way goes to show the spectrum of people she’s impacted. As a Black woman, it makes me say, no, we deserve equal rights across the board. We deserve the same rights white men get with the Constitution.”

For many, the diminutive woman was more than a judge on the nation’s highest court; she was a pop culture icon.

Ginsburg took the stage at operas, was embodied in many a Saturday Night Live skit, was portrayed in the feature film “On the Basis of Sex” and featured in an Oscar-nominated 2018 documentary, “RBG,” which included a scene of the justice lifting weights while wearing a sweatshirt emblazoned with the words “super diva!”

That documentary helped 25-year-old Nebraska native Kishahnica Rajendran express to her mother why she wants to pursue law.

“My mom is from India, so she didn’t really understand the law school process here,” said Rajendran, who was studying for the bar when she heard of Ginsburg’s death. “When she saw the documentary, how RBG did it, and what she went through in her life, it was a way my mom saw me. She was like, you can do that, too. She was smiling the biggest smile, and she was so proud that I was going into this profession. That’s one moment I will always remember.”

Novelist Donna Dechen Birdwell, who lives in Austin, Texas, joked she’s “never been into hero worship,” but that “growing up in an era where there were very few women of high character and achievement whom I’d want to emulate, Justice Ginsburg was there. She was an anchor of hope for my daughter’s future.”

Fighting through pain, standing up for health care access

Several women said they would remember Ginsburg as someone who stood up for access to health care, fought through her own health struggles and inspired them to care for others.

Barbara Wood, a clinical psychologist who practices in Bethesda, Maryland, said Ginsburg’s life work and grit makes her want to give back.

“To me, she is someone who battled everyday to fulfill the highest ideals of our founders that we are all created equal and deserve equal treatment under the law, Wood said. “Her example will always inspire me to remember that each day, regardless of physical or emotional pain, I have the opportunity and obligation to contribute to the welfare of others.”

New York City resident Tati Chin, 26, who works in finance, said Ginsburg’s rulings on women’s reproductive rights were most important to her. In 2014, Ginsburg dissented in Burwell v. Hobby Lobby, which determined that family-owned and other closely held companies cannot be forced to offer insurance coverage for certain birth control methods.

“For me, it was just powerful because I have an IUD and am strongly propelled for reproductive rights for women, so her dissenting meant a lot to me at the time,” Chin said.

San Diego resident Sue Eng Ly, 29, said Ginsburg’s example is what gave her the strength to file a Title XI suit against the man who assaulted her in graduate school, and to persevere through the process when she had doubts about “ruffling people’s feathers.”

“You know how people pray to the Rosary when terrible things happen? I’d try to channel her strength,” Ly said. “In a lot of ways, Justice Ginsburg, her fierce advocacy showed me, particularly as a woman of color, that I was worthy.”

Kaitlin Welborn, 34, who works for the ACLU of Alabama, said Ginsburg is the reason she went to law school and advocates for women’s reproductive rights. Her cat’s name is Ginsburg.

“I think she has made me a better lawyer. I aim to always emulate everything that she has done,” said Welborn, who was wearing a “Notorious RBG” T-shirt. “I admire the adversity that she went through and how she was able to keep her integrity, and her values, and still succeed. And that she was able to find a partner in life, Marty Ginsburg, who was an equal partner.”

Welborn recalled working at a college bookstore in 2007, making $2 less than her male counterpart, the year that Ginsburg dissented in Ledbetter v. Goodyear. The court ruled employers cannot be sued over race or gender pay discrimination if the claims are based on decisions made by the employer 180 days ago or more. Ginsburg later urged Congress to right the court’s wrong, and Congress passed the Lily Ledbetter Fair Pay Act in 2009.

“That showed me that even when you lose, it is meaningful to make that stance – that you might still win in the long run because you’re laying the groundwork for the future,” Welborn said. “Small wins make a difference. And the fact that you are doing it at all makes a difference for your clients, and the rest of women in America.”

As a lawyer focusing on domestic violence law, Parisa Pirooz, 29, said Ginsburg’s stamina as an outspoken woman, Jew, and Supreme Court Justice has given her courage when she finds herself in difficult positions.

“As someone who has to constantly be in that position to be in that fight, and when you see someone in that position, you know the pain and the strength and the amount of energy that that drains,” Pirooz said. “To be in these spaces where you can’t put your guard down at any moment, to exhibit that amount of strength consistently is difficult.”

Pirooz said she’s seen a range of reactions from friends and colleagues to Ginsburg’s death – some critical of the justice’s past decisions.

“I don’t think it’s fair to her legacy to expect that she always have the right opinions or answers to our societal issues,” Pirooz said. “I think it’s conducive to our nation’s progression to celebrate – give her credit where credit is due.”

An inspiration for all ages, to make a difference at all ages

Women of all ages said Ginsburg had a profound impact on their lives.

Katherine Nguyen, 27, a nurse in the Philadelphia area, said Ginsburg taught her you’re never too young or too old to make a difference.

“She fought for rights I take for granted and reap the benefits from and am still learning about,” Nguyen said. “She was outspoken, passionate, and remained politically active past a typical ‘retirement’ age.”

Lucy Stack, 10, said she was coming home from riding her bike Friday when she saw her mom crying in their Louisville home. She broke the news to Lucy.

“I have a portrait of Ruth Bader Ginsburg, and then I have one of her most favorite quotes,” Lucy said. “Someone asked her when there would be enough women on the court, she said when there are nine because there are nine supreme court justices.”

Lucy said the framed portrait and quote are on her wall of inspiring women in her bedroom. They drive her to pursue her dream of acting.

“Last night, we were pretty sad,” said Lucy’s mother, Rachel Slack. “But she said to me, we just have to make sure that someday there are nine.”

5 Things You Might Not Know About Food Banks In Massachusetts

Sun Sep 20 , 2020
MASSACHUSETTS — When it comes to food insecurity in our community, there are many facts we may not know but one aspect is certain: A lot of hungry people are out there, and the number is growing. More than 37.2 million people struggled with hunger prior to the coronavirus pandemic. […] 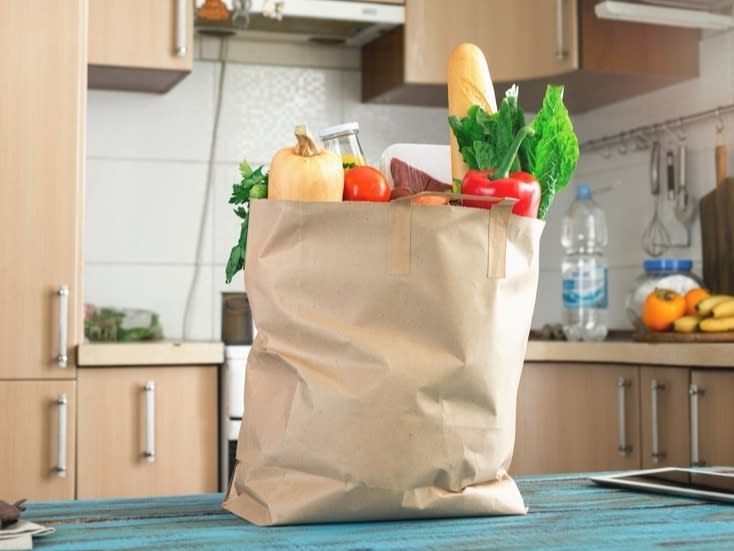