Installment plans, with names like Afterpay, Klarna and Affirm, have become popular in recent years — and will probably gain more favor as the pandemic economy rages on. So is there good reason for the popularity? And is this a payment method you should try? Only you can decide that, […]

Installment plans, with names like Afterpay, Klarna and Affirm, have become popular in recent years — and will probably gain more favor as the pandemic economy rages on. So is there good reason for the popularity? And is this a payment method you should try?

Only you can decide that, but here are answers to common questions about installment plans.

Afterpay is the most well known of the installment plans that have a “buy now, pay later” spending model for customers. But as noted, there are other big players in this market.

Klarna is a big name, for instance. So is Quadpay.

How Does It Work?

Generally, these services are only offered for online shopping, but some offer installment plans as an in-store payment.

For instance, Walmart and Target both offer a service called Quadpay, which you can use online or as a payment at the register inside the store.

Some stores, like Finish Line, use both Afterpay and Klarna. Other stores use exclusively one service.

These days, the odds are decent that the store you’re shopping at, especially if it’s online, will offer some sort of installment plan — or maybe a variety to choose from.

Is One Installment Plan Service Better Than the Other?

It really depends on your opinion. Just make sure you read the fine print and understand how the “buy now, pay later” concept works and which services may have higher fees or spending requirements.

In the plus column:

— If you make each installment plan payment on time, in most cases, you will pay no interest.

— You’ll get whatever you order or buy as fast as you would by paying the balance immediately.

— Instead of having to pay for something all at once, you can spread out the financial pain over several (usually four) payments.

In the negative column:

— If you don’t make the installment payment plans on time, you will end up paying more for your product than you would otherwise. You’ll be charged late-payment fees.

— There is often a minimum spending requirement. If you want to buy a pair of socks for $10 on an installment plan, you probably can’t. Generally, you need to be buying something $35 or more (that’s the case, for instance, with Afterpay and Klarna). That said, if you use QuadPay, you can buy a pair of $10 socks over four equal interest-free payments.

— Not everybody is approved for an online installment plan. It can depend on a lot of things, including the cost of the product that you want to buy and whether you have a history with an installment payment plan service. If you’re new to using it, you may not be approved to buy something expensive.

There are, as noted, quite a few online installment plans. Some of them include:

— Afterpay. There is a grace period for late payments (usually 10 days; it’ll be on your payment schedule). If the payment isn’t made by then, you’ll be charged a late fee. The fee amount varies depending on how much the purchase was, but the amount of late fees will never be more than 25% of the initial order.

— Klarna. Late fees can be up to $35 per missed month, but your late fee won’t exceed what the minimum payment is due. And note to “up to.” You might pay a much smaller late fee. It depends how expensive the item is.

— QuadPay. Late fees can go up to $10 (and maybe just $5 depending on your state). You can get no more than three late fees per purchase. On some select checkout orders, there may be a $1 per-installment convenience fee.

— Affirm. It doesn’t charge late fees (or any fees) but points out that no payment or an underpayment could hurt your credit. So how does it make money? Well, it does charge interest — but it’ll tell you how much in interest you’ll pay upfront.

— Sezzle. You pay about 25% of the total cost — and like most of these services, you’ll make three more payments every two weeks. If you are late with a payment, you’ll be charged $10, but if you then make the payment within 48 hours, the $10 late fee will be waived.

Is Using an Installment Plan a Good Idea?

Rakesh Gupta, associate professor in decision sciences and marketing at Adelphi University in Garden City, New York, says, “I don’t believe there is much added value to the consumer from these types of payment schemes. They are somewhere between layaway plans from some retailers and payments-in-full to credit cards.”

He sees the main downside that it could cause you financial stress later. “It means keeping track of another bill and another account on top of mortgage payments, home equity payments, auto loans, student loans, credit cards and a host of other bills,” Gupta says.

He thinks it’s likely that a lot of people will end up missing payments and then shelling out more money than they needed to for the product.

Robert Goldberg, a clinical associate professor in finance and economics, also at Adelphi University, says the main downside is “these plans encourage spending beyond one’s means.”

He does concede that there might be some situations where a consumer, short on cash, could benefit from these plans, but overall he wouldn’t recommend regularly using these installment plans.

“I reviewed these plans with my freshman college students taking a personal finance course, and they agreed that it is better to delay the purchase, save the money and then decide whether the expenditure makes sense,” Goldberg says.

Still, it really comes down to how badly you need the item you’re thinking of buying. If it’s something you feel you do need now, and you’re willing to pay in installments, it can beat a layaway plan with its fees and not being able to get the item for weeks or months. It certainly beats taking out a payday loan to pay for the item. It is arguably a better way to make a purchase than putting the item on a credit card and having revolving debt — provided, of course, that you make the payments on time and aren’t late.

On the other hand, don’t forget Gupta’s warning that the “buy now, pay later” installment plans mean that you’ll add another financial obligation to your short-term future. If the purchase is something that can wait, you probably should listen to Goldberg’s students.

Wed Sep 23 , 2020
Consumer Reports has no financial relationship with advertisers on this site. Karen Franklin has not ventured out much from her home in Yonkers, N.Y., recently—and it’s not just because of fears of COVID-19. The 65-year-old has had hearing loss for over 30 years, and even with a hearing aid in […] 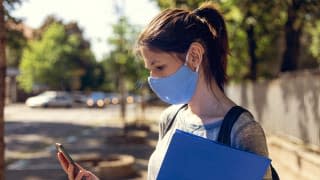