Square’s bitcoin business is booming, lawmakers are batting for crypto staking protocols and a blockchain-based voting system in Russia may have been hacked. You’re reading Blockchain Bites, the daily roundup of the most pivotal stories in blockchain and crypto news, and why they’re significant. You can subscribe to this and all […]

Square’s bitcoin business is booming, lawmakers are batting for crypto staking protocols and a blockchain-based voting system in Russia may have been hacked.

Bitcoin Revenues
Square’s bitcoin business is booming. Announcing Tuesday, the San Francisco payments company said revenue made from selling bitcoin to Cash App customers during the second quarter came to a total of $875 million – up 600% year on year. Square stresses it only takes a “small margin” selling bitcoin to customers, but Q2’s results show it made $17 million profit – an increase of 711% year-on-year. While bitcoin made up only 5% of Square’s revenue at $34 million in Q1 2018 (its first full quarter), it came to $65.5 million in the same quarter in 2019. Square Crypto, a subsidiary, has also sponsored Lightning developer Lloyd Fournier.

Taxing Staking
Four congressional lawmakers wrote a letter to the Internal Revenue Service Wednesday, asking the U.S. tax agency to ensure holders of staked crypto don’t face tax liabilities for receiving block rewards before they sell their new tokens. “It is possible the taxation of ‘staking’ rewards as income may overstate taxpayers’ actual gains from participating in this new technology,” the letter said. “It could also result in a reporting and compliance nightmare, for taxpayers and the Service alike.” Each block could be treated as a taxable event, creating headaches for filers and the IRS alike. The lawmakers, chairmen of the Congressional Blockchain Caucus, said staking rewards resemble both rental income and interest payments.

Sophisticated Engineering
The teenager arrested for allegedly masterminding the recent Twitter hack gained access to the platform by “socially engineering” a Twitter employee, according to a government affidavit and the company’s internal investigation. Social engineering is a broad term that encompasses many methods of exploitation including bribery, coercion, phishing and SIM swaps. Haseeb Awan, CEO of Efani, which protects against SIM swap attacks, estimated around 1,000 people fall victim every day, and the exploits are getting more sophisticated. In many cases, perpetrators go uncaught, and victims frequently do not come forward, making the arrests in the Twitter hack the exception to the rule.

Blockchain Breached?
Hackers are reportedly selling the personal data of more than a million Russians who voted electronically, using blockchain technology, during the recent constitutional amendment process. Over 1.1 million data points were stolen and put on sale for $1.50 each on the online forums, though authorities deny the hack. The online voting system, based on Bitfury’s open-source Exonum blockchain and built with the help of Kaspersky Lab, was previously reported to have poor data protection. Journalists were able to decrypt people’s votes as well as pull passport numbers out of a weakly-protected file posted online by the authorities, a Russian media outlet Meduza wrote.

DeFi Development
The Chicago DeFi Alliance (CDA) is launching one of the first accelerator programs for decentralized finance (DeFi) startups beginning in August. The program is modeled on Silicon Valley’s Y Combinator program and will invest $120,000 in each participating team in exchange for future token purchases. Volt Capital co-founder Imran Khan and CDA partner Qiao Wang will lead the eight-week program for early-stage startups, plus a fast-track program to introduce more established startups to relevant experts. “DeFi has all the fundamental qualities to become a real, trusted alternative to the legacy financial system,” Wang said.

In the mainstream financial press there is a lot of attention given to the inflationary risks of the Federal Reserve’s bout of money printing. As Pantera Capital CEO Dan Morehead said, the United States has printed more money in June than in its two centuries of existence. Putting this in context, over the course of the pandemic the Fed has nearly doubled its balance sheet to about $7 trillion.

Some pundits, such as professor of economics Antony Mueller, believe the reverse case – that the economy is deflating – is more likely in the short term. Deflation is when the rate of growth of demand is lower than the growth rate of production. An under-utilized workforce reduces not only productivity, but also demand: because there’s less money to spend.

It’s this same depressed workforce that is likely keeping inflation, or hyperinflation, in check, according to Goldman Sachs economist Jan Hatzius.

“The modern monetary policy suffers from a deep fear of deflation and tries to avoid it at any cost,” Mueller said. “There are various effects at work that promote an automatic recovery from a deflationary shock.” He cited ZIRP and NIRP (zero interest rate policy and negative interest rate policies) and quantitative easing as two tools in the Fed’s toolbox.

These same tools often can often prevent a natural business correction and lead the economy to inflate. If that’s the case, and the workforce remains under lockdown, the states may be heading to a period of stagflation instead, where inflation rises without growth.

Ending on a pragmatic note, Mueller said reliable economic prognosis is difficult and expectations are volatile. There is a degree of trust in economists and government actors to make forward-directed decisions, and “while trust can easily be destroyed, it is hard to re-establish.”

Sustained Cycle
After wild Sunday action that saw the price of the world’s oldest cryptocurrency fall as low as $10,050 on spot exchanges like Coinbase, bitcoin is trading relatively flat, at around $11,200 Tuesday. “The asset is trading in a narrow range of $11,080 to $11,220,” said Constantine Kogan, a partner at crypto fund of funds BitBull Capital. “To continue last week’s rally, bitcoin needs to overcome the resistance level, which is in the $11,300- $11,400 region,” he added.

Ethereum 2.0: How It Work and Why It Matters
CoinDesk Research’s 22-page report covers the long-awaited Ethereum 2.0, from its technology and development road map to potential market impact as the foundational upgrade to the world’s largest smart contract platform. Ethereum developers present commentary about the benefits and risks this new technology may bring. Download the free report.

…See, Lightning!
Blockstream released its latest version of c-lightning, an implementation of the Lightning Network. Dubbed “Rat Poison Squared on Steroids,” referencing Warren Buffett’s denouncement of Bitcoin, the update has added multi-part payments, an easier way to plug in crime-sleuthing watchtowers and also laid the groundwork for a tracking tool that could make filing taxes easier.

Final, Official Test
Ethereum 2.0’s final and official public testnet, Medalla, went live, according to the Ethereum Foundation. Medalla is the final testnet before the launch of the Eth 2.0 network, which is tentatively expected by year’s end. Over 20,000 validators had joined the network within a few hours of launch, staking some 650,000 ether (ETH), according to the Beaconcha.in block explorer.

No Hope?
Bobby Goodlatte, founder of seed investment firm Form Capital and early Facebook employee, joins NLW to discuss the perils of social media and whether these platforms can be redeemed.

Wed Aug 5 , 2020
Halloween-Themed Face Masks You Can Order Online Right Now Hurry—these festive face coverings are already selling out! Halloween will look a bit different this year as we practice proper social distancing guidelines and wear cloth face masks with our DIY Halloween costumes. But even though you won’t be trick-or-treating or […] 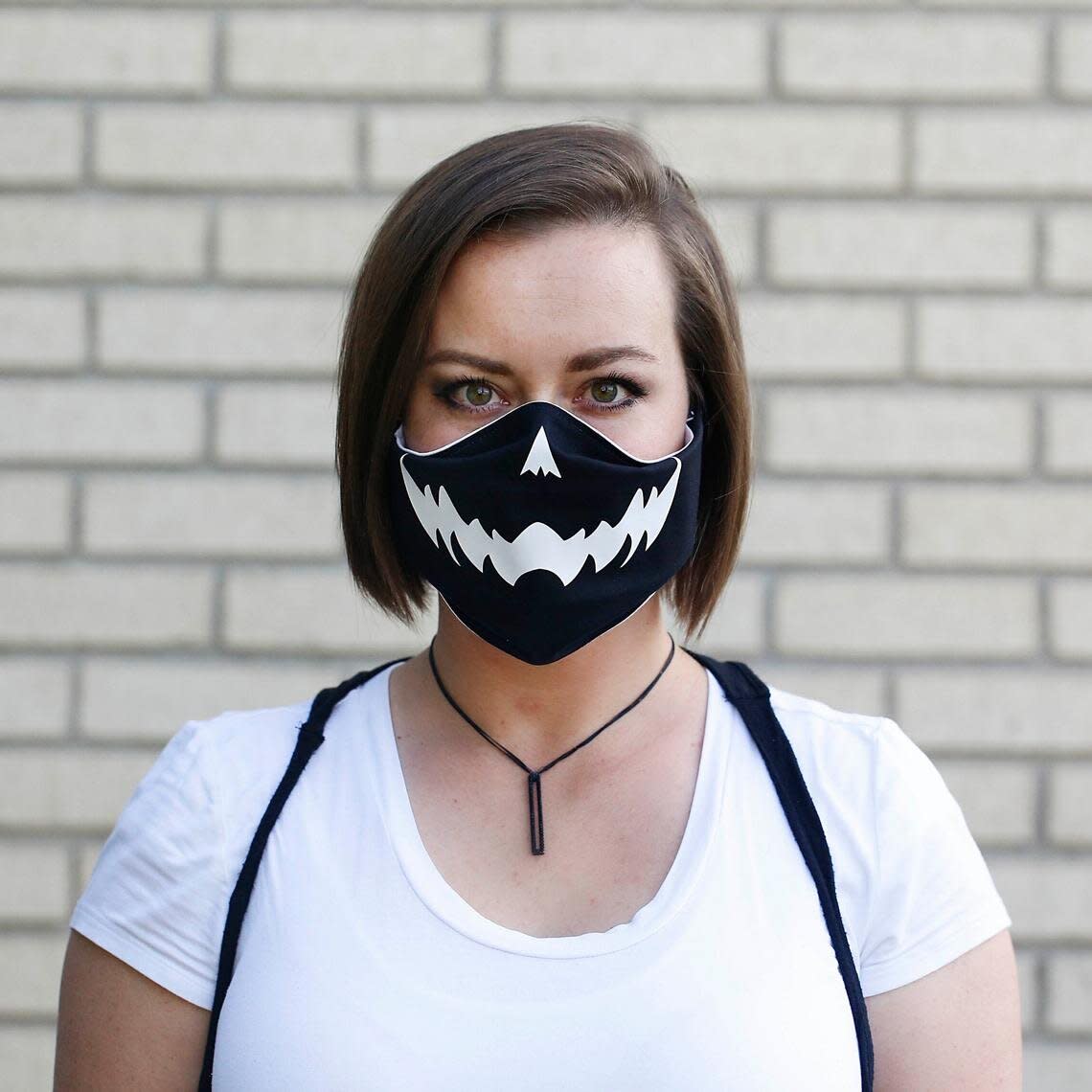