It’s Monday, Aug. 24, and even the unexpected Florida story sometimes has us flummoxed. Take the tale of two Florida men snagged, along with President Donald Trump’s former campaign manager and ideological point man, Steve Bannon. The three were arrested last week for fleecing hundreds of thousands of donors in […]

It’s Monday, Aug. 24, and even the unexpected Florida story sometimes has us flummoxed.

Take the tale of two Florida men snagged, along with President Donald Trump’s former campaign manager and ideological point man, Steve Bannon. The three were arrested last week for fleecing hundreds of thousands of donors in an online crowdfunding campaign set up to privately finance construction of Trump’s border wall.

Some details you just can’t make up: Bannon, who was an early adviser to the president’s immigration strategy, was arrested on a yacht belonging to the Chinese billionaire Guo Wengui, a Communist Party dissident accused of working as a double agent for China’s government. Wengui is also a Mar-a-Lago member.

Others arrested were Brian Kolfage, of Miramar Beach in the Panhandle, who ran the “We Build the Wall” group and is alleged to have pocketed more than $350,000 to fund a lavish lifestyle, Andrew M. Badolato, a Sarasota-area venture capitalist long tied to Bannon, and Timothy Shea of Colorado.

WHAT (ELSE) WE’RE TALKING ABOUT

Warnings ahead: In Broward County, activists reported that voters were turned away from the polls during Tuesday’s primary because of polling location changes and that there were inaccessible drop boxes for vote-by-mail ballots. Their warning: hitches like those will become worse in November if they go unaddressed.

Convention shut out: If the road to the White House runs through Florida, the road to the Republican Convention apparently doesn’t. U.S. Rep. Matt Gaetz was the only Floridian to appear on the convention lineup as of late Sunday. An obvious omission is Gov. Ron DeSantis, who has loyally followed the playbook of the White House during the coronavirus, including going to bat for the president by suggesting he relocate the Republican National Convention to Jacksonville. The notion that Florida would be COVID-safe enough this week to host the event turned out to be a high-risk gamble the governor took at the president’s urging. We’ll see what kind of kudos he gets from the prime time show this week.

It’s all about Trump: Miami-Dade’s mayoral race may explain just how polarized this election cycle will get as the non-partisan contest is shaping up to be a proxy for the presidential race. Candidates Steve Bovo, a Republican, and Daniella Levine Cava, a Democrat, are fighting for the vote of independents — just like Joe Biden and Donald Trump. But voter feelings about the president are so intense that he has been a central feature of both campaigns.

Family fault lines: Tuesday also marked the beginning of what is expected to be one of the most competitive congressional races in the country between Miami Rep. Debbie Mucarsel-Powell and Miami-Dade Mayor Carlos Gimenez. Without missing a beat Tuesday night, Mucarsel-Powell was out with an attack ad featuring the mayor’s son, which she was forced to revise. The often-tangled accouterments of Miami politics are becoming a common line of attack between the candidates for Florida’s 26th Congressional District.

Tally insiders, take 2: There is a common denominator between the failed CONNECT unemployment system Florida paid Deloitte Consulting $47 million for and a new, controversial $135 million deal with Deloitte to manage Medicaid data: one man.

Schism over schools: Leon County Circuit Judge Charles Dodson is expected to issue a decision early this week in lawsuits filed by teachers unions challenging Education Commissioner Richard Corcoran’s order requiring schools to resume in-person instruction Aug. 31, regardless of the extent of the spread of the coronavirus in their communities. The order provides an exception for districts that get state and local health officials to rule otherwise, but many health officials have refused to weigh in on whether children should return to campuses.

As of Friday, more than two dozen of the state’s 67 school districts had already reopened with only about 150,000 children returning to classrooms but in South Florida, about 600,000 public school students are returning to school in a virtual environment only, at least for the short-term.

Last week, the Miami-Dade County school district confirmed that 578 employees had tested positive for coronavirus between March and the end of July.

Virtual answers: What does all this mean for our students and their learning? Please join the Miami Herald for a live-streamed discussion Tuesday, Aug. 25, at 12:30 p.m. to explore the profound impact the coronavirus is having on families with children in school. Register here for “Miami’s Learning Curve: Navigating Education Access in a Pandemic,” to get answers to important questions for students, teachers and parents.

Hinting at loosening restrictions: Meanwhile, DeSantis had fewer appearances than usual last week, choosing not to hold the traditional pre-storm press conference from the state Emergency Operations Center as his staff had expected on Friday. Earlier in the week, he convened a round-table discussion in Central Florida to continue to elevate the need to focus on rising mental health and drug abuse case numbers. That’s when he hinted that the declining case numbers, coming just before most schools are set to reopen across the state, will result in lowering some restrictions in South Florida.

Pressure is mounting: Gimenez, Miami-Dade’s mayor, is feeling the pressure to ease COVID restrictions as the infection rate continues to decline. (The daily rate of positive cases in the county dipping below 10% for several days for the first time since June.) But Miami-Dade still hasn’t gotten back to the hospital conditions present the last time Gimenez lifted business restrictions and Dr. Anthony Fauci last week urged him to “stay the course.”

On Friday, the county mayor appeared to be preparing a middle ground. He said he will meet with restaurant and casino owners and hinted that he’s ready to allow casinos to open, loosen restaurants restrictions, and even allow gathering at Hard Rock Stadium. Meanwhile, Broward has already started some loosening of restaurant hours.

When Floridians let down their guard and positive case numbers spiraled out of control in June and July, Florida became the epicenter of the nation’s COVID crisis, forcing the governor to impose new limits on bars and restaurants. Only after hospitalizations surged and deaths numbers multiplied did the governor embrace county-imposed mask mandates. Since then, local governments have hired their own enforcement officers to crack down on partying, imposed stricter limits on restaurants then the state, and hired their own contact investigators to attempt to contain the virus’ spread.

Bright spots: For months, families have watched as their loved ones in nursing homes and assisted living facilities across the state deteriorate in isolation, as sporadic and incomplete testing and prevention policies allowed the virus to spread. Last week, state regulators and industry officials were finally spurred to act by a woman who took a job as a dishwasher just so she could visit her husband at a memory care center. Florida regulators agreed to allow limited nursing home visits of certain family members, and this week the task force has promised to finalize its work.

Questions for the governor: What should be the norm for mask wearing, social distancing and group gathering when South Florida moves to Phase 2? What is the governor doing to help the many rural areas where the rate of positive COVID cases remains in double digits? What’s being done to prevent another wave?

Mon Aug 24 , 2020
(Bloomberg) — The coronavirus crisis may have finally forced Japan’s government to get serious about fixing its computer systems. Before the pandemic, the problems might have been merely annoying, but now they’re impeding an economic recovery. Japan’s aging administrative pipeline has delayed aid money getting to where it’s needed during […] 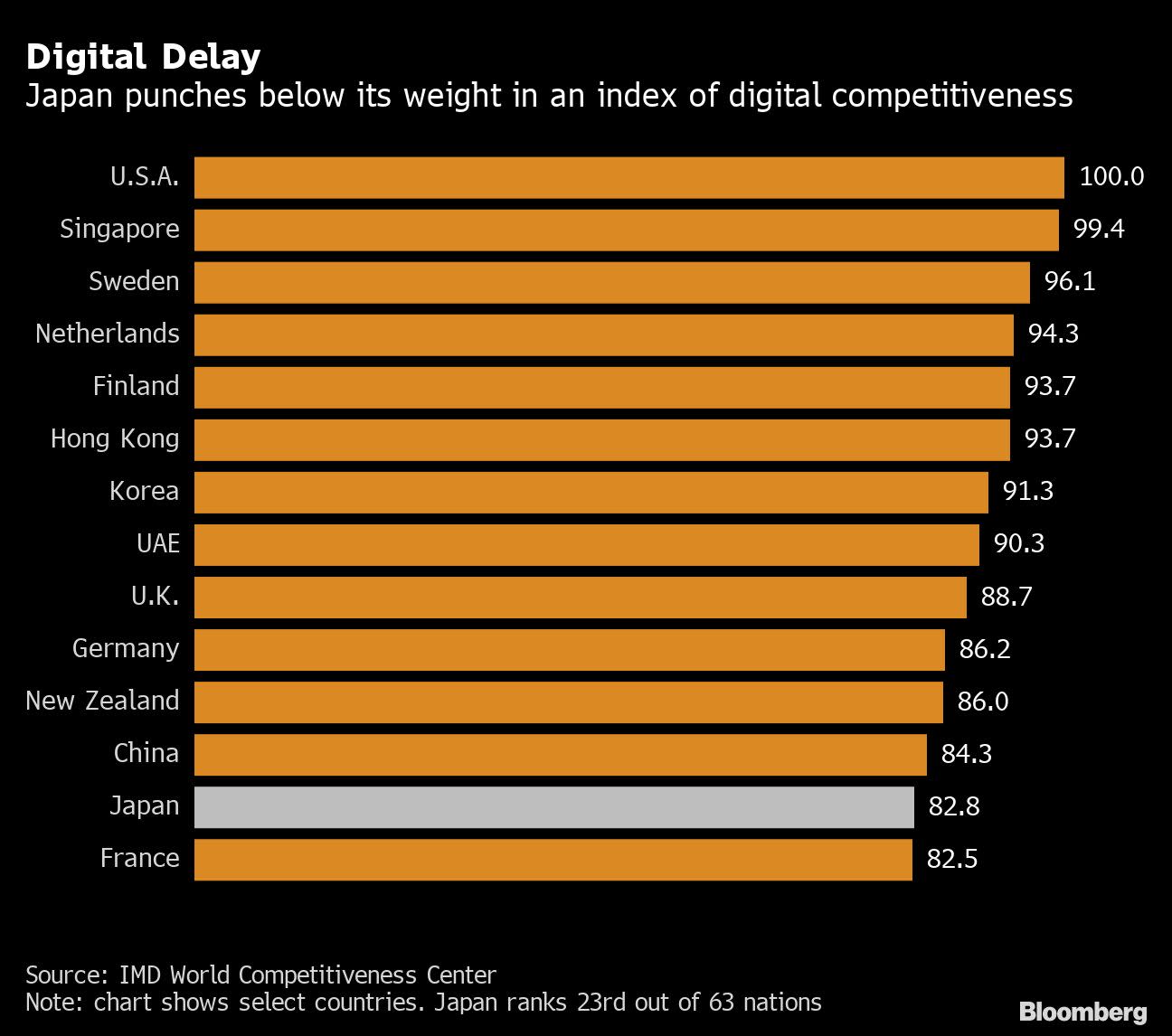