Washington — Former White House adviser Stephen Bannon has pleaded not guilty to charges of wire fraud and money laundering Thursday, after federal prosecutors in New York announced that Bannon and three others were indicted for allegedly defrauding donors to a $25 million fundraising campaign to build a wall along […]

Washington — Former White House adviser Stephen Bannon has pleaded not guilty to charges of wire fraud and money laundering Thursday, after federal prosecutors in New York announced that Bannon and three others were indicted for allegedly defrauding donors to a $25 million fundraising campaign to build a wall along the southern border.

Bannon was released on $5 million bond Thursday afternoon, and must forfeit his passport. He can only travel to D.C., Maryland, Connecticut for work, and the Eastern and Southern district of New York.

Bannon, 66, joined the Trump campaign in 2016 and subsequently served in the White House as chief strategist until being forced out in August 2017. He is the sixth close associate of the president to face federal charges since 2017.

Mr. Trump distanced himself from Bannon on Thursday, telling reporters at the White House that “I haven’t been dealing with him for a very long period of time.” The president also said he disliked the private effort to fund construction of the border wall and believed “it was being done for showboating reasons.”

In a July tweet, Mr. Trump referenced a section of wall built by a “private group which raised money by ads” and said “it was only done to make me look bad, and perhsps [sic] it now doesn’t even work. Should have been built like rest of Wall, 500 plus miles.” Others involved in the “We Build the Wall” project are former Kansas secretary of state Kris Kobach, Sheriff David Clarke and Curt Schilling, none of whom were mentioned in the indictment.

The four men named in Thursday’s indictment are accused of defrauding hundreds of thousands of people who donated to the “We Build the Wall” fundraising campaign that raked in more than $25 million to build a wall along the U.S.-Mexico border, according to the indictment.

Federal prosecutors said donors were repeatedly assured that 100% of the money raised would be used to build the wall, but those claims were false. Kolfage, Badolato and Bannon allegedly signed off on those assertions knowing that donors would be encouraged to donate if they believed all funds were going toward wall construction.

“Some of those donors wrote directly to Kolfage that they did not have a lot of money and were skeptical about online fundraising campaigns, but they were giving what they could because they trusted Kolfage would keep his word about how their donations would be spent,” the indictment said.

Instead, the Justice Department said the men profited from the fundraising scheme. Bannon allegedly received more than $1 million from “We Build the Wall,” which was funneled through a non-profit he controlled and some of which was used to cover his personal expenses and pay Kolfage.

According to the indictment, Kolfage, who organized the campaign, received more than $350,000 from money donated to “We Build the Wall,” which he then used to pay for “home renovations, payments toward a boat, a luxury SUV, a golf cart, jewelry, cosmetic surgery, personal tax payments and credit card debt.”

To hide the payments from the fundraising campaign, federal prosecutors said the four men routed money through the nonprofit and a shell company controlled by Shea. The men concealed the money using fake invoices and fraudulent vendor arrangements to ensure the scheme remained confidential, according to the indictment.

“Although We Build the Wall spent money on the construction of the border wall, hundreds of thousands of dollars were siphoned out of We Build the Wall for the personal use and benefit of Kolfage, Bannon, Badolato and Timothy Shea,” federal prosecutors said.

Under an arrangement reached by Bannon, Kolfage and Badolato days after the fundraising campaign launched, Kolfage was to be secretly paid $100,000 up front and then $20,000 per month, according to the indictment. To keep the deal out of public view, Bannon agreed to funnel payments from We Build the Wall to Kolfage through the nonprofit he controlled.

Kolfage received the $100,000, as stipulated by the agreement with Bannon and Badolato, in February 2019, and for the next two months, Kolfage was paid $20,000 in what federal prosecutors described as a “monthly salary,” according to the indictment.

Beginning in April 2019, Kolfage received subsequent $20,000 payments through other third-party entities that purported to be vendors for We Build the Wall, federal prosecutors said.

According to the indictment, the men learned We Build the Wall was under federal criminal investigation in October 2019 and “thereafter took additional steps to conceal the fraudulent scheme.”

Guo, the billionaire owner of the yacht on which Bannon was arrested, is a vocal critic of the Chinese Communist Party and fled the country in 2014 as authorities prepared to bring a vast array of corruption charges against him, allegations that he has denied. According to an October report from Axios, Guo Media, a company linked to the billionaire, hired Bannon under a one-year, $1 million contract for consulting services starting in August 2018. The New York Times reported Guo and Bannon first met in 2017, and Bannon frequently appears on the Guo Media news platform, with several videos showing the pair on Guo’s yacht.

Although Mr. Trump has distanced himself from Bannon now, he once praised him.

“Steve Bannon will be a tough and smart new voice at @BreitbartNews…maybe even better than ever before. Fake News needs the competition!” the president tweeted in August 2017 when Bannon left the White House to return to the far-right outlet.

6 takeaways from the Democratic National Convention

Fri Aug 21 , 2020
Framing his candidacy as a vessel of light meant to lead America out of its “season of darkness,” Joe Biden formally accepted the Democratic presidential nomination Thursday night, capping a more than three-decades long quest at an unprecedented convention transformed by the coronavirus pandemic. Pledging to restore core values like […] 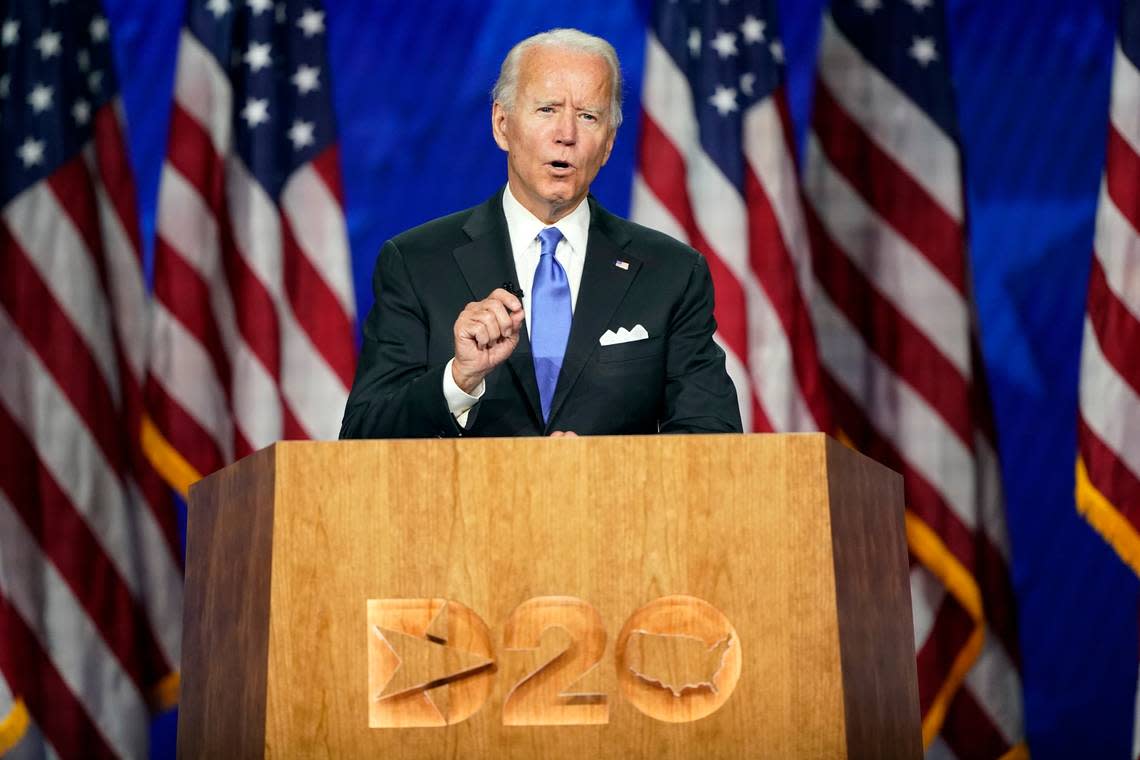