Ratcheting up its sustainability commitments, Selfridges is unfurling a two-month campaign involving repair, rental and resale services — and setting steep commitments for all its vendors regarding eco-friendly materials.

Forecasting “a tough year ahead,” Pitcher stressed the need to “provide new experiences and new conversations” for its customers as they emerge from coronavirus lockdowns with stronger convictions about mindful consumption, and heightened concerns about the environment.

The executive said Selfridges is “putting people and planet at the heart of our thinking,” which will “transform the way we do business and the way we shop over the next five years.”

The retailer plans to make it easier for customers to shop responsibly with a new destination called “The Organic Cotton Shop,” plus labeling detailing the eco credentials of more 12,500 stockkeeping units across 350 brands initially, said Daniella Vega, director of sustainability at Selfridges Group, who perched on a stool several meters away from Pitcher during the online press conference.

Come 2025, Selfridges will only stock products that adhere to its new sourcing requirements on raw materials, which was preceded by a “three-year consultation process with brand partners.”

As part of the kickoff of Project Earth, Prada will unveil its first, full Re-Nylon collection, made with Econyl recycled nylon yarn, at the Corner Shop at Selfridges today, as reported.

Among the broad range of materials that must meet eco and ethical trade requirements by 2025 are cotton, feathers, leather and forest-derived fibres such as viscose, rayon, modal and lyocell. It also extends to foodstuffs including meat and palm oil, plus wood, paper and plastic.

The retailer plans to sell “previously loved” fashions in a department dubbed ReSelfridges slated to open on Sept. 28 for a six-week run, and set up a concierge counter for repairs. Last year, Selfridges repaired about 30,000 items, spanning from ready-to-wear to watches, according to Vega.

It partnered with HURR Collective to launch a new clothing rental service, offering styles from Zimmermann, Cecilie Bahnsen, Emilia Wickstead and others for anywhere from four up to 20 days.

At present, 30 brands in the beauty hall will be part of the retailer’s Plastic Conscious edit and will encourage customers to return packaging for recycling via a partnership with Terracycle.

Selfridges also plans to host a range of activities — including talks and screenings — about ecological topics in the coming weeks.

“We’re on a mission to change mind-sets,” Vega said. “We want to create an alternative vision of retail.”

According to surveys conducted in 2019, 85 percent of Selfridges customers are more concerned about climate change and sustainability than a year ago, and 56 percent believe the fashion industry hurts the environment.

Billing Selfridges as the first department store to commit to science-based targets, Pitcher said stores will be powered by 100 percent green energy by the end of September, and the company has committed to have a net-zero carbon footprint by 2050, and to reduce greenhouse gas emissions by 64 percent by 2030.

In her view, customers will “shop businesses they trust, that they know care about people and the planet, that are doing the right thing, and that are transparent,” she said.

Selfridges signed the Fashion Pact at the G7 Summit last year, joining a coalition committed to reducing impacts on climate, biodiveristy and oceans. It was the first retailer in the U.K. to achieve The Carbon Trust standard for carbon, water and waste in 2014, and has retained it ever since.

virtual Democratic convention kicks off with emphasis on unity

Mon Aug 17 , 2020
Photograph: Carolyn Kaster/AP The Democratic national convention begins on Monday with a star-studded lineup and heavy emphasis on unity aimed at presenting Joe Biden and Kamala Harris as the US’s best hope for healing a deeply divided nation reckoning with the parallel crises of a global pandemic and racial injustice. […] 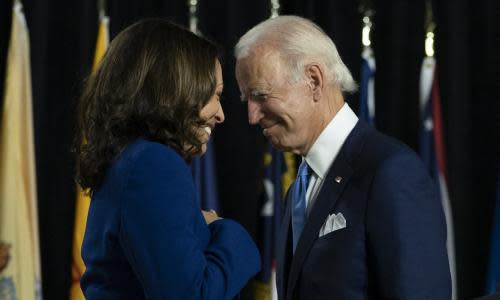