Tax authorities from the United States and four other countries have joined forces to stop shadowy global money networks that use international borders to stymie local investigations. Their first coordinated move against a target is not in some far-flung country. It is on U.S. soil. A team of international investigators […]

Tax authorities from the United States and four other countries have joined forces to stop shadowy global money networks that use international borders to stymie local investigations.

Their first coordinated move against a target is not in some far-flung country. It is on U.S. soil.

A team of international investigators is scrutinizing Euro Pacific Bank, a boutique financial firm based in Puerto Rico, a joint collaboration by The Age, an Australian newspaper, the Australian version of “60 Minutes” and The New York Times found. A number of people accused or suspected of tax evasion and money laundering kept accounts at the bank, according to officials involved in the investigation. They want to know what role it may have played in helping them move money illegally.

While obscure, Euro Pacific has ties to some famous names in the financial world. It was founded by Peter Schiff, a well-known libertarian economist with a deep-seated animosity to paying taxes who earned the name Dr. Doom after correctly predicting the 2007-2008 financial collapse. It also has a financial relationship with the Federal Reserve Bank of New York, which is uncommon for its type of financial firm, and links to big institutions in several countries, including Australia, Britain and Canada.

Neither Euro Pacific Bank nor its personnel have been charged with wrongdoing. Daniel Kramer, its spokesman, declined to answer questions about the investigation. Based on the conclusions they make, the agencies can bring criminal charges, civil complaints or other actions in their home countries against their investigative targets.

This is not the first time that global authorities battling dirty money have focused on Puerto Rico. The U.S. territory has long used tax breaks, favorable regulations and other inducements to build up its small financial industry.

Easy regulations have led to standards that sometimes lag those elsewhere, according to some regulators. Last year European Union officials included the U.S. territories of Puerto Rico, the Virgin Islands, Guam and American Samoa on a list of places with “strategic deficiencies” in anti-money-laundering laws, along with countries like Iraq and Libya. The Trump administration objected, and a later version excluded the American territories.

Puerto Rico has also encouraged the creation of boutique banks that cater to international investors, called international finance entities, or I.F.E.s, like Euro Pacific Bank. Last year, the New York Fed grew concerned about how I.F.E.s in Puerto Rico and the Virgin Islands scrutinize their customers. It stopped allowing the firms to open accounts with the Fed, which made it easier for them to send and receive money around the world.

The New York Fed restarted approvals this year after strengthening compliance requirements and “know your customer” rules. Firms that already had accounts with the Fed have until March to comply.

“The purpose was to build out a robust international financial sector,” Mr. Joyner said. “But it really hasn’t done that. You can’t have a robust anti-money-laundering program or know your customer program with just four people.”

The investigation into Euro Pacific Bank is being conducted by tax officials in the United States, Australia, Britain, Canada and the Netherlands. They formed the Joint Chiefs of Global Tax Enforcement, or J5, two years ago to swap information. They were inspired by the disclosure of the Panama Papers, the leaked documents that detailed how the rich hide their money.

Agents with the Internal Revenue Service have interviewed Mr. Schiff and the bank’s president, Mark Anderson, for the investigation, nicknamed Operation Atlantis.

Officials involved with the investigation declined to discuss details, but evidence circulating among the agencies suggests they are raising questions about Euro Pacific and its clients.

Its client list has included Michael Wilson, who pleaded guilty to wire fraud in 2017 in federal court in Buffalo, N.Y. The authorities seized $750,000 he held in four Euro Pacific accounts.

It also included Simon Antequil, the founder of an Australian payroll services company where employees illegally funneled more than $75 million that should have gone to taxes or retirement funds into shell companies. In July, Mr. Antequil was sentenced to at least five years in prison. An Australian judge called his crime “one of the most serious offenses of its kind to come before a court in this country.”

Though small compared with international banks, Euro Pacific is sizable for a Puerto Rico I.F.E. It has about 8,000 depositors, according to the company. It holds about $140 million in deposits, a decline of nearly $30 million since 2017.

Euro Pacific is majority-owned by its chief executive, Mr. Anderson. Mr. Schiff holds a 45 percent stake, according to regulatory filings. Both declined repeated requests for interviews from The Times.

In an appearance with Australia’s “60 Minutes” at his home outside New York last month, Mr. Schiff said that “there have been some allegations” but that “all of the allegations are unfounded, and there’s no basis, in fact, for any of them.”

Through a spokesman, Mr. Schiff later said that the interview was “clearly designed to take the information I provided and use it out of context.”

Silver-haired and loquacious, Mr. Schiff, 57, runs several investment funds and has been a commentator on cable news shows for more than a decade, along with hosting a podcast. He is the son of Irwin A. Schiff, who spent more than a decade in jail for evading taxes and died five years ago while in federal custody.

Mr. Schiff founded Euro Pacific in 2011 in the lush Caribbean outpost of St. Vincent and the Grenadines. He promoted it as an alternative to the established banking system. In one 2011 interview, he promised to issue debit cards backed by individual holdings of gold and silver. In another, from 2014, he said that he had chosen St. Vincent because “you have secrecy, privacy and you have no tax.”

In its early years, Euro Pacific had poorly protected email and file storage programs, said John Ogilvie, the company’s former information technology director, who started in 2014. Mr. Anderson insisted on putting all personal and company passwords in a directory labeled “passwords” on his computer, in a file with “master password” in the title, he said.

“He was just not very careful,” Mr. Ogilvie said.

Mr. Ogilvie, 49, left the company in 2016. In an email to Mr. Schiff that August, he called Euro Pacific “the most unprofessional working environment I have ever had the displeasure in participating.”

By 2017, Mr. Schiff had relocated the firm, his $783 million asset management business and his own official residence to Puerto Rico, taking advantage of a law that permits Americans who move their companies there to reduce tax liability. Mr. Schiff said he wanted to relocate to Puerto Rico in part to make it easier for Euro Pacific to set up an account with the New York Fed.

Euro Pacific also reached deals with Bank of Montreal, NatWest of Britain and Perth Mint, an Australian precious metals dealer, to allow customers to easily transfer funds to it.

Oversight in Puerto Rico was light. The New York Fed does not regulate I.F.E.s, even ones that keep accounts with it. The Fed, a spokeswoman said, does not comment on individual account holders but requires them to provide an independent assessment of their compliance program and an updated know-your-customer questionnaire.

The firm’s day-to-day regulator is the Puerto Rico Office of the Commissioner of Financial Institutions. The office, which has just a handful of bank examiners, said it had yet to complete an examination of Euro Pacific.

Puerto Rico also is not a signatory to the “common reporting standard,” which requires banks from more than 150 nations to report big deposits to the depositor’s home country to stop tax fraud and other crimes.

That company, Amanda J. Molyneux & Company in London, which helps clients open offshore companies, wrote online a year ago about the benefits of Puerto Rico’s nonparticipation in the common reporting standard. In essence, said Richard Scott Carnell, a former Treasury Department official, Molyneux was selling Euro Pacific as a firm that will not tattle to tax authorities.

“They said the quiet part out loud,” said Mr. Carnell, adding, “it is unsavory.”

Mr. Kramer, the Euro Pacific spokesman, said the bank “did not endorse” the message from Molyneux. Third-party marketers like Molyneux, he said, receive $25 from Euro Pacific for every new customer they bring to the bank.

Charles Farran, a Molyneux managing director who had posted the message, said he properly vetted all his customers and the message to clients “was not made for any marketing process.” He added in a statement that the post was “merely a statement of fact and a matter of public record.”

After learning of the J5 investigation from a Times reporter, Mr. Farran said he “will now suspend any client application referrals to the bank.”

Others found the customer vetting process at Euro Pacific to be surprisingly light.

In 2017, a group of artists called the Demystification Committee began a project to show how easily money could be moved offshore anonymously. They set up a swimsuit line emblazoned with the logos of the companies they used to set up their offshore project — including Euro Pacific.

Francesco Tacchini, a member of the group, said he filled out a form in July 2017 to set up an account with Euro Pacific as part of the project. He had to state he was not a U.S. citizen and provide a copy of his passport identification page. But the follow-up phone interview with a Euro Pacific bank representative, he said, “felt like it was a formality.”

Even before the investigation, business has not always gone smoothly for Euro Pacific. It has been unable to strike deals with major credit card brands to issue cards that would allow customers to withdraw their money.

Today it emphasizes the security and technology it provides. Despite his popularity among tax opponents, Mr. Schiff is not mentioned in a 14-page presentation posted to the company’s website.

Four pages are dedicated to explaining how the bank “seeks to obtain a in-depth knowledge of each and every client.”

Your next $1,200 stimulus check may be inching closer

Mon Oct 19 , 2020
Your next $1,200 stimulus check may be inching closer The bargaining in Washington that could provide you with a second $1,200 relief payment has been dragging on for months, but may be coming to a head. The talks were on, then President Donald Trump declared they were done. Just days […] 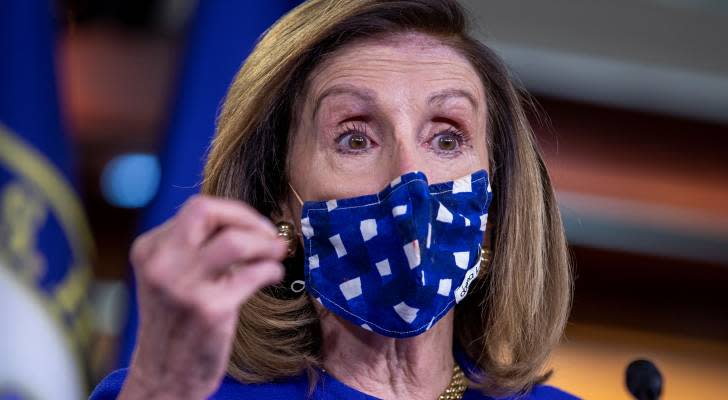