As theaters in key U.S. cities like New York and Los Angeles remain shuttered, Warner Bros.’ “Tenet” was set to add $20.2 million in North American receipts through the Labor Day holiday for a cumulative $146.2 million, and currently stands at $126 million in international grosses, according to estimates from measurement firm Comscore.

The highly anticipated Christopher Nolan film, which opened in China to $30 million this weekend, added $78.3 million globally in its second weekend of international release (a 36% drop), playing on nearly 53,000 screens across 46 markets.

It broke IMAX records, earning $11.1 million across 1,168 IMAX screens in 43 markets, marking the biggest global box office weekend ever in September for the format. And in North America, where “Tenet” earned $2.8 million across 272 IMAX screens through Monday, it became the biggest domestic Labor Day opening ever for IMAX despite missing major metropolitan areas like New York and L.A.

The film, which was positively received with a B CinemaScore and a 74% “fresh” rating on review aggregation site Rotten Tomatoes, remains the sole blockbuster on the release calendar until “Wonder Woman 1984” opens in October.

“Tenet,” with its $200-million production budget, is a major gamble on the health of the traditional big-screen experience at a time when studios including Warner Bros. are increasingly willing to experiment with online releases.

Walt Disney Co. on Friday began offering “Mulan” for $30 to Disney+ subscribers, eschewing the film’s planned cinematic debut; it will screen theatrically only in markets where Disney+ is not available. Movies including Warner Bros.’ “Scoob,” Universal’s “The King of Staten Island” and Disney’s “Hamilton” have gone directly to video on-demand or streaming amid the COVID-19 pandemic as studios feared ceding additional ground to Netflix with audiences largely staying home.

Internationally, Disney’s “Mulan” earned $5.9 million in a handful of smaller international markets, placing No. 1 in the United Arab Emirates, Malaysia, Singapore and Thailand. Next weekend the film will expand to China and Russia.

Nolan, a staunch advocate for the theatrical experience in the streaming age, seemed almost ordained by fate to make the stand for exhibition after his movie’s release was delayed multiple times because of coronavirus closures. The director in March penned an impassioned Washington Post op-ed in support of the theater business, which in normal times employs about 150,000 people in the U.S.

AT&T-owned Warner Bros., which has enjoyed a lucrative relationship with Nolan because of the “Dark Knight Trilogy,” “Dunkirk” and other films, never seriously considered the digital route for “Tenet.” Instead, the Burbank-based studio — after delaying the film’s release date multiple times — pursued an unusual rollout strategy, debuting it Aug. 26 in countries including Britain, South Korea, Canada and Saudi Arabia. Domestic distribution began Monday with early “preview” screenings before the picture went wide on Thursday.

No one really knew what to expect from “Tenet’s” first weekend, with about 3,300 North American theaters, or 60% of locations, open for business. Would pent-up demand drive stir crazy audiences back into theaters, or would fears of COVID-19 keep them away?

Three states (New York, New Mexico, and North Carolina) remain no-go zones for indoor theaters. Six other states, including California, have partly opened. California Gov. Gavin Newsom recently said indoor theaters could reopen in counties that meet certain thresholds, provided they limit capacity to 25% or 100 people — whichever is fewer. Exhibitors scrambled to reopen in San Diego, one of the few areas in the state that qualified in time for “Tenet.”

Multiplexes across the country limited their auditoriums to anywhere from 25% to 50% of their usual capacity, depending on state and local rules. With those restrictions, some analysts said any result higher than $20 million during the four-day weekend should be considered a success. Others originally projected “Tenet” could bring in as much as $30 million by Monday.

What the results mean will become clearer in the coming weeks. Traditionally, 80% of ticket sales for Hollywood releases happen in the first three weekends. But a typical launch was out of the question for “Tenet,” which executives hope will make up ground by playing for many weeks longer than a tentpole from the “before times.”

Atlas Distribution Company opened “My Brothers’ Crossing” in 73 locations to $17,350.

Next weekend, Sony’s romantic comedy “The Broken Hearts Gallery” is slated for a wide release and IFC Midnight will open the thriller “Rent-A-Pal” in limited release.

Sun Sep 6 , 2020
Freshman Sarah Anne Cook carries her belongings as she packs to leave campus following a cluster of COVID-19 cases at the University of North Carolina in Chapel Hill, North Carolina. AP Photo/Gerry Broome Businesses in college towns in the US are still reeling from the mass exodus of students that […] 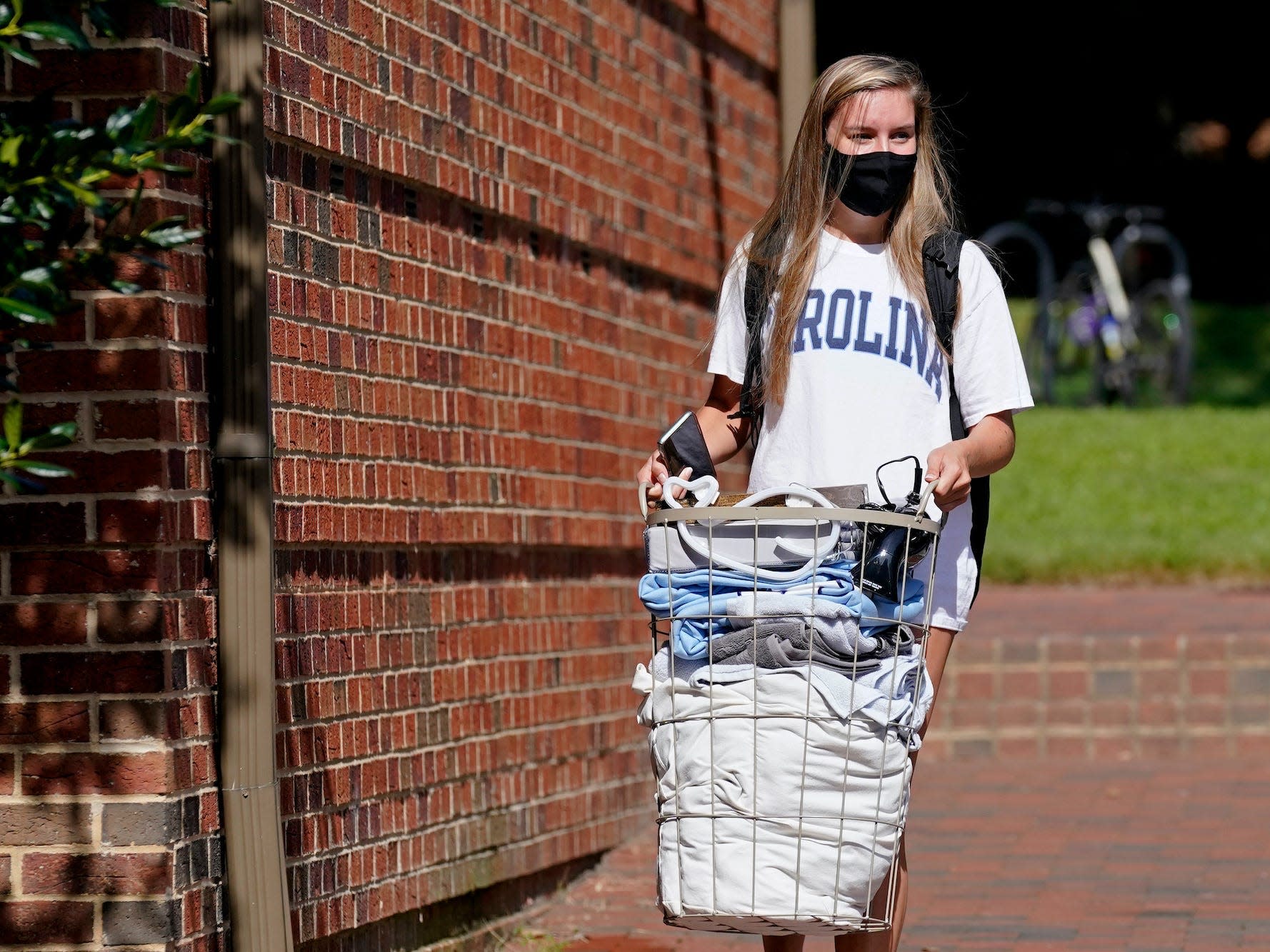