Coronavirus took away most of the spring sports season, meaning there wasn’t much high school baseball or track. We wanted to honor the spring sports athletes, though. We feel their pain. Today, we are naming all-star teams — with a twist. We won’t name them by sport. But we asked […]

Coronavirus took away most of the spring sports season, meaning there wasn’t much high school baseball or track.

We wanted to honor the spring sports athletes, though. We feel their pain.

Today, we are naming all-star teams — with a twist.

We won’t name them by sport. But we asked schools to nominate players who were stars in the classroom and stars in their communities. Some of the stories from the boys and girls candidates we got back were inspiring.

Instead of us picking a spring sport athlete of the year, we’re letting you decide. At the bottom of this list is a poll that will be open until Friday morning. The winner will be announced Sunday, June 21. (Note: Poll results will not be shown after Tuesday. The poll will remain open until Friday.)

Notable: Brothers Foster and William Harris founded the local nonprofit, Naturalize Charlotte, which provides resources for immigrants going through the naturalization process. They have been awarded Charlotte’s Richard Vinroot International Achievement Award. The award recognizes those who have worked for the continued internationalization of Charlotte, contributed to efforts to improve the international community and have a record of outstanding service to the greater Charlotte community. With the emergence of COVID-19 this spring, the boys created an online resource tool in 10 languages to make information on the pandemic more accessible to those who may not have the language skills to otherwise connect. Foster did not compete this spring due to injury. William ran in one meet, clocking a 5:02 for the 1,600 meters. Foster will be attending Washington & Lee University in the fall. William will be attending Haverford College, where he will be a member of the men’s cross-country and track and field teams.

Notable: GPA at the end of this year will be a 4.711. Nemani is a BETA Officer, National Honor Society member, Model U.N. President, Science National Honors Society President. He is vice president of the Concord Youth Council and is also the founder of the local chapter of an international nonprofit called ByeByePlaticBags, which is a youth-led movement to eliminate plastic pollution.

Notable: All-Conference in 2018 and 2019; only two rounds this season, but William was T-10 for scoring in NCISAA 2A Classification. Has a 4.31 GPA and will attend University of Notre Dame. He won a Scholastic Art & Writing Gold Key for a personal essay that was nominated for the American Voices Award; won Silver Award on the National Spanish Exam, AP Scholar with Honor Award. D’Amore is also an Eagle Scout, longtime volunteer for Joe Martin ALS Foundation, counselor at Joe’s Camp, for kids whose family has been touched by ALS

Notable: Torres will attend the United States Military Academy at West Point in the fall. In five games, he hit .357 with a .500 on-base percentage. He had four RBI and five runs scored. Torres, who carries a 4.425 GPA, volunteers at Angles and Sparrows Soup Kitchen. Chris has volunteered at Camp Invention as a counselor from 2016 to 2019. He has also spread his service to various local causes such as the Ramah Church Road Second Harvest Food Bank, the Humane Society of Charlotte Pet Supply Drive, a Breast Cancer Awareness “Fun Run” campaign, and various cleanups with the Carolina Raptor Center. He also volunteered for four years as a math tutor.

Notable: Throwing 169 feet in discus, Radhuber has a 3.78 GPA and is a member of the Connection Club and a volunteer for the Viking Training Camp. He was a school Beautification Day volunteer and he helped organize and raise $2,700 for suicide awareness.

Notable: As a freshman, he was Providence’s fourth catcher. In his sophomore year, he split time on the junior varsity. By his junior year, a commitment to the weight room saw him make varsity all-conference. Coach Danny Hignight said he’s the hardest-working player he has coached in 23 years. He now has a 3.9 GPA is a team leader and a National Honor Society Member. “With the sudden ending of our season,” Hignight said, “Sam didn’t get to finish out his dream and it has been very challenging for him. He is a tremendous loss to our program not only on the field but he will be missed even more in our locker room.”

Notable: Through six games this spring, Davidson College signee was batting .600 with nine base hits, 11 RBI, seven runs scored, two doubles and a home run. He has a 4.3 GPA and is a member of his school’s National Honor Society and has a 4.3 GPA. He’s also a student mission fellow member named to SouthLake Christian’s first Student-Athlete Advisory Council

Notable: Starting shortstop for all four years, he played four games as a senior and hit .444 with four RBI and four stolen bases. He hit .381 as a junior. Sylvestre has a 4.35 GPA, is an NCHSAA Scholar-Athlete and is a member of the National Junior Honor Society and National Honor Society. He was an American Mathematics Competition (AMC-10) selection. Sylvestre has met his required community service hours for graduation having a total of over 120 hours during his high school career. He has volunteered with local youth baseball camps during his high school career. He is also a volunteer with his church, Wellspring Church, leading a student ministry group as well as helping each week to break down the set up of the sanctuary, including all audio and visual equipment tables and chairs and as well as volunteering in the nursery. Jaden has also volunteered with Common Heart in Indian Trail during his four years of high school, providing food boxes through delivery to a community of eight families as well as volunteering at annual barbeques for those that are less fortunate. Through Union Academy, Jaden has also been involved with the Special Olympics, Assisted Living Community volunteer and a volunteer for Operation Christmas Child. Jaden is also a math tutor for his peers.

Notable: In four games, Todaro had 21 goals and 10 assists. He finished his career with a Union County record 163 goals. Todaro also has a 4.40 GPA. He is a volunteer fundraiser for the HeadStrong Foundation, whose mission is to improve lives affected by cancer. He Raised over $3,200 in three seasons He is also in the Weddington High School Mentor’s Club and mentors underprivileged children in the community.

If you cannot see the poll on mobile, click here

'It's very exciting to be returning to work'

Sun Jun 14 , 2020
“It’s very exciting, we can’t wait to have our customers back,” says Annie Martin, who manages the Waterstones Piccadilly bookshop, in London. Non-essential retailers, such as fashion, toy and book shops, will be allowed to reopen in England on 15 June – as long as they have coronavirus-related safety measures […] 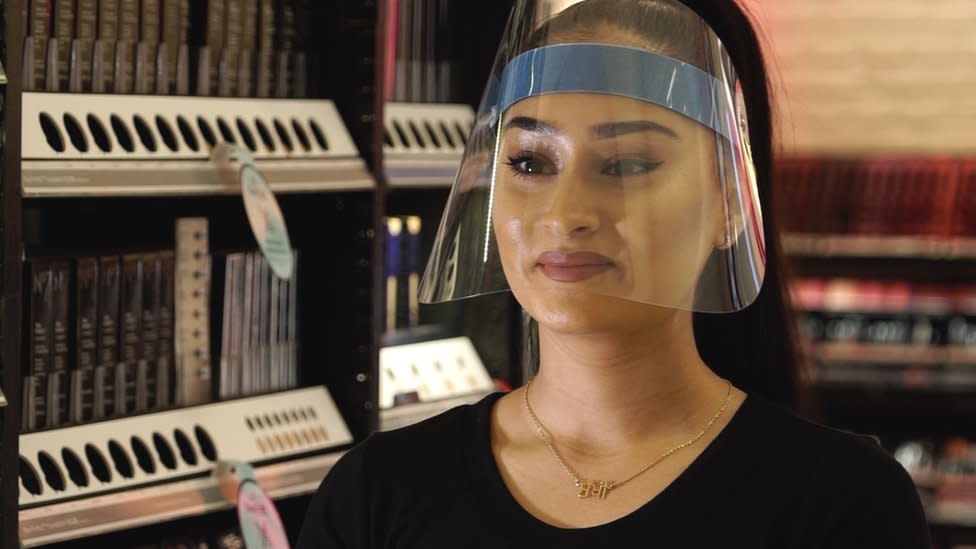