Actress Milana Vayntrub has appeared on hit shows like “This is Us,” but many know her as Lily — the friendly employee from AT&T commercials (she played Lily from 2013  to 2016 before taking a hiatus and returning to the role earlier this year). As a public face of the company, Vayntrub has also cultivated a large social media following, boasting nearly 740,000 followers on Instagram. But the actress’ recent experience on social media, she revealed in an Instagram live, had been upsetting and violating.

Last week, social media users rediscovering Vayntrub’s AT&T videos began posting a slew of objectifying memes of the actress online, using and distorting many of her old photos. Some posts received hundreds of thousands of likes, spurring thousands of comments about Vayntrub’s appearance.

As commenters made objectifying comments and posted “milk” emojis, the AT&T account attempted to shut down the harassment, replying that the company does not condone “sexual harassment of employees in the workplace or [their] social channels” and that users’ “overshares aren’t welcome.”

Twitter user @megatronraid, who goes by Lu, screenshotted some of the comments and shared them on Twitter.

Lu told Insider that she believed the comments were “invasive and uncalled for,” but felt that any attempts to intervene would have been “futile,” as even AT&T was unsuccessful in dissuading the trolls.

Ultimately, Lu decided to post the comments to show how people behave with impunity online.

“The kind of things you’d see on AT&T’s post is at such a direct contrast with the behaviors of people you’d talk to on a daily basis,” she said.

In an Instagram Live, the actress addressed how the sudden onslaught of social media harassment had affected her emotional wellbeing.

“Maybe it just has to do with being a person on the internet, or maybe it’s specific to being a woman on the internet. But all of these comments —” she said before pausing to read several explicit comments as they appeared on the screen, “it hurts my feelings.”

In another segment from her live stream, which has since been reposted to Twitter, Vayntrub stressed how violating the messages were.

“Let me tell you, I am not consenting to any of this. I do not want any of this,” she said in the clip, adding that her tormentors were using her personal, decade-old photos from a pool party.

As she spoke, some viewers continued to make objectifying comments, while others instructed her to develop a “thicker skin” or simply report her trolls.

Reporting every harasser, Vayntrub noted grimly, would be virtually impossible.

“I’m hurting and it’s bringing up, like, a lot of feelings of sexual assault,” she said. “I am just like, you know, walking my dog and getting messages from people who have distorted my pictures to get likes on their accounts.”

As comments continued to pour in, a visibly emotional Vayntrub elected to end the live stream.

“I feel so bad for her. At one point in the stream, she sounds like she’s about to cry and dumba—- in the comments keep going with the thing she just said makes her uncomfortable,” one commenter wrote.

Vayntrub’s long-time employer is also speaking out against the harassment.

“We will not tolerate the inappropriate comments and harassment of Milana Vayntrub, the talented actor that portrays Lily in our ads,” AT&T said in a statement to Insider. “We have disabled or deleted these comments on our social content that includes Lily and we will continue to fight to support her and our values, which appreciate and respect all women.”

Since addressing the situation, Vayntrub has been promoting her newest project: a conversation with Ted Bunch, the co-founder of A Call To Men, an organization that describes its objective as “creating a world where all men are loving & respectful and all women and girls are valued and safe.”

The conversation, which is scheduled to take place on the evening of August 26, will address healthy masculinity, gender equity, and racial justice.

Representatives for Vayntrub did not immediately respond to Insider’s request for comment.

Invest in this One Alternative Investment for Major Money Impact

Wed Aug 26 , 2020
Alternative investments can seem like a woo-woo way to earn money — but shove that thinking aside. Here’s one way to invest that can make a huge impact on your portfolio: Invest in blue-chip art. More specifically, invest with Masterworks. What is Masterworks? 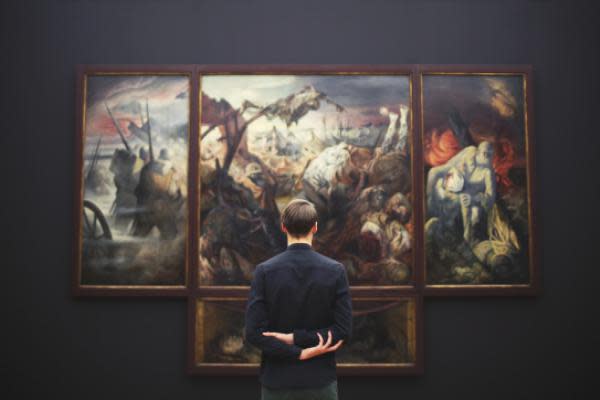