The Boys season 2 The Boys are back – and now we know exactly when season 2 will debut. A recent announcement stream has not only revealed the Amazon Prime superhero series’ release date (which you can see down below) but also a move to a weekly format. Then there’s […]

The Boys are back – and now we know exactly when season 2 will debut. A recent announcement stream has not only revealed the Amazon Prime superhero series’ release date (which you can see down below) but also a move to a weekly format. Then there’s the introduction of a new Supe, fresh footage, and even the first three minutes of The Boys season 2 to watch. If you’ve missed it, we’ve recapped everything for you in our essential guide to the sophomore season.

Beyond that, there are the latest quotes from The Boys cast, including what some of them will be getting up to in season 2. New images indicate this’ll be (somehow) a bloodier and more brutal season than what preceded it, while we also have apparently confirmation of the upcoming eight episode titles for you to pore over for clues. It’s all here in our Super round-up of all things The Boys season 2.

If you missed Friday’s livestream, here are the first three minutes of Season 2. Get fucking ready! #TheBoysAreBack pic.twitter.com/aPn1JJkdYCJune 29, 2020

The Boys “F*ckin’ Reunited” stream involving the entire cast not only came bundled with a release date announcement (more on that below), but also the first three minutes of The Boys season 2.

Soundtracked by The Rolling Stones’ “Sympathy for the Devil,” the sneak peek details a meeting with Vought CEO Stan Edgar (Giancarlo Esposito, who also appeared briefly in season 1) and Secretary of Defense Robert Singer (Jim Beaver).

Elsewhere, Black Noir is shown violently dealing with Naqib, one of the terrorist Supes that sprung up at the tail-end of the first season. You can watch it now above over and over, a perfect way to whet the appetite before September. Speaking of which…

The Boys season 2 release date is set for September 4. Showrunner/creator Eric Kripke revealed as much during The Boys’ recent announcement stream, but there’s a catch.

Whereas the first season dropped all eight episodes at once, only the first three (of eight) episodes will be released on September 4. From thereon, it’s weekly, which means the rest of the episodes should drop one-by-one on the following dates, though that’s subject to change.

The Boys season 2 episode titles have seemingly been revealed

The Writers Guild of America West website has tucked away what appears to be the first confirmation of all eight episode titles for The Boys season 2. Here they are, in alphabetical order:

The Boys season 2 cast remains largely unchanged at its core, though there are a couple of new faces set to shake things up.

The Seven also remains intact: Erin Moriarty (Starlight), the terrifying Anthony Starr (Homelander), The Deep (Chace Crawford), and Queen Maeve (Dominique McGelliot) will be back and potentially form part of Vought’s fightback against Billy’s crew. Jessie T. Usher (A-Train) should also be up and running for season 2.

It’s Black Noir, though, who we should keep an eye on. The mysterious masked member of The Seven, played by Nathan Mitchell, is confirmed to appear in season 2 – but will play a much larger role. Karl Urban recently said he will feature in some “diabolical action,” while Anthony Starr says Black Noir is a “fucking force” in the upcoming episodes.

Two faces who appeared in The Boys season 1 should be part of the regulars in the season 2 cast. Breaking Bad’s Giancarlo Esposito, who made a brief cameo in the season 1 finale, will be returning as Vought supremo Mr. Edgar. “He will be a really important character in season 2,” series creator Eric Kripke told EW. He’ll be featuring in “four to five episodes.” It’s a big year for Esposito, as he’s set to be glowering his way through Better Call Saul and The Mandalorian season 2. But he could be at his menacing best here.

Plus, there’s a new superhero in town. As revealed by Kripke, The Boys season 2 will feature a fresh character in the form of Stormfront, played by Aya Cash, who is “on par or worse than Homelander,” according to Cash.

Cash also said Stormfront “matches” Homelander, though her comic book counterpart is a nasty Nazi. Judging by the rest of Vought’s super-powered stable, she’s probably not going to play nice, either. The first footage of her character was revealed on Twitter, and she’s certainly able to stand toe-to-toe with Homelander judging by their brief face-off.

More fresh talent is also inbound. According to Deadline, Goran Visnijc will play “Alistair Adana, the charismatic and shadowy leader of a mysterious church,” and Claudia Domit is Victoria Neuman, a “young wunderkind congresswoman”

Patton Oswalt has also been confirmed. He’s in a “#SecretRole”. Eric Kripke has even hashtagged it, so you know it’s a big deal. Jim Beaver will also reprise his role as Secretary of Defense Robert Singer.

Elsewhere, Shantel VanStanten, who plays Becca Butcher in the show, should also have a much larger role to play after The Boys season 1 ending rug-pull revealed that she has been raising Homelander’s child – not dead or missing like Billy had believed – for the past eight years.

It’s unlikely, however, that Elizabeth Shue will return as Madelyn Stilwell. Having laser holes for eyes will do that to you – though never say never in the world of supes and Compound V.

Kripke is looking beyond The Boys season 2, though. He recently gave Negan actor Jeffrey Dean Morgan an informal job offer with an unknown role in season 3. Could we see those seeds being sown this year?

The Boys season 2 story: “No one is ready”

Much of The Boys season 2 story will invariably deal with the aftermath of Homelander’s grand reveal, as well as charting the escape of Hughie, Frenchie, The Female, and Mother’s Milk now that they’re on the FBI hitlist. Kripke, though, has also offered up a slightly more light-hearted tease of what’s to come, including an appearance by producer Seth Rogen.

“In season 2, we’re filming a movie within a [show] called Dawn of the Seven,” Kripke explained to EW, “We’re all talking about wouldn’t it be great if Seth was one of the main characters of that movie [if] he was like the Agent Coulson of the group? If his schedule is clear, we’ll do that.”

Jack Quaid, who plays Hughie on the show, has teased even bigger stakes this time around. “No one is ready,” he tells ComicBook.com. “It’s just absolutely bonkers. I’ll just put it this way, the scale is a lot bigger. I think we’ve topped season one, in terms of insane moments that make you say ‘What the hell?’ I’ve done things this season that are definite firsts for me in my career, and I probably won’t do them again since.”

At CCXP, Anthony Starr (who plays Homelander) also revealed what we can expect from his character (via Collider): “It’s a very internal journey. It gets really fucking weird, and I can’t tell you what, but I’ve done some of the weirdest things I’ve ever done.” Let’s hope it doesn’t involve milk…

Karen Fukuhara (The Female) adds: [Show creator Eric Kripke] wants it to be big, more action, bigger sets, all of that. But he wanted every character to dive into their past. It just digs deeper.”

This was backed up by a recent appearance from much of the cast at the C2E2, where Urban said that “you’re going to love season two” (via ComicBook.com) and that Billy Butcher’s dog, Terror, will also make an appearance.

The Boys season 2 trailer is here nice and early. That can only be a good thing. Featuring buckets of blood, the moments immediately after The Boys season 1 ending, and plenty of OMG moments, you’re unlikely to see a better trailer all year. There are so many heart-stopping moments, that it can be difficult to keep up.

But here’s what we’ve gleaned from the trailer: Homeland Jr. is there alongside his dad. That spells trouble for Billy Butcher, who appears to have escaped his missing wife’s new home. Black Noir also appears to be getting more involved this season, while Starlight is getting roughed up by Homelander in another scene. Something tells me she isn’t out of Vought’s clutches just yet.

A handful of stills from The Boys season 2 have been released – and they’re not for the squeamish.

The first was shown off by Eric Kripke on his personal Twitter account. As you can see below, he’s standing alongside The Female, Hughie, and Mother’s Milk, all covered in blood, plus a suspiciously clean Frenchie. They’re all giving us the middle finger too. Cute.

A small token for #TheBoysTV fans. World’s first pic of #Season2. As you can see, we’re up to our old tricks. If you haven’t seen, JOIN US. Streaming now on @PrimeVideo @TheBoysTV #TheBoys #SPN #SPNFamily #Timeless pic.twitter.com/3z29mVBfNlAugust 10, 2019

Karl Urban has also posted an image to social media, essentially confirming he isn’t dead (yet) despite being in Homelander’s sights come season 1’s end. He’s well and truly Butchered, according to the caption, and is sporting a nasty bloodied head. Let’s hope the show’s return mirrors these images and doesn’t skimp on the red stuff.

Finally, there’s The Female looking ponderous with Urban’s Billy Butcher. The character, played by Karen Fukuhara, should have a more extended role next time around.

The Boys season 2 premiere is “better than I ever could’ve hoped it would be,” says Seth Rogen

Two of the show’s main producers have already watched an early cut of the season 2 premiere and shared their thoughts.

“We just watched the first episode of the second season this week.,” producer Seth Rogen said in a recent interview with Collider. “It was a wonderful thing as producers. This is way better than I ever could’ve hoped it would be.”

The Boys season 2 episode count has been confirmed

Episode counts are a funny thing. Overshoot it and you can end up with a bloated, flabby season – a common complaint about Netflix’s Marvel output. With The Boys season 1 being such a roaring success with its eight-episode run, it may have been tempting for Amazon to ask for more episodes for season 2. That’s not the case. Kripke told Collider’s Steven Weintraub that season 2 will also be eight episodes.

Thu Jul 2 , 2020
On April 9, California nursing homes were already in a state of crisis. Employees were staying home, fearing for their safety without proper protection. Facilities reported deaths daily. At 12:30 p.m. that day, the chief advocate for California’s nursing home industry dispatched an email to officials at the California Department […] 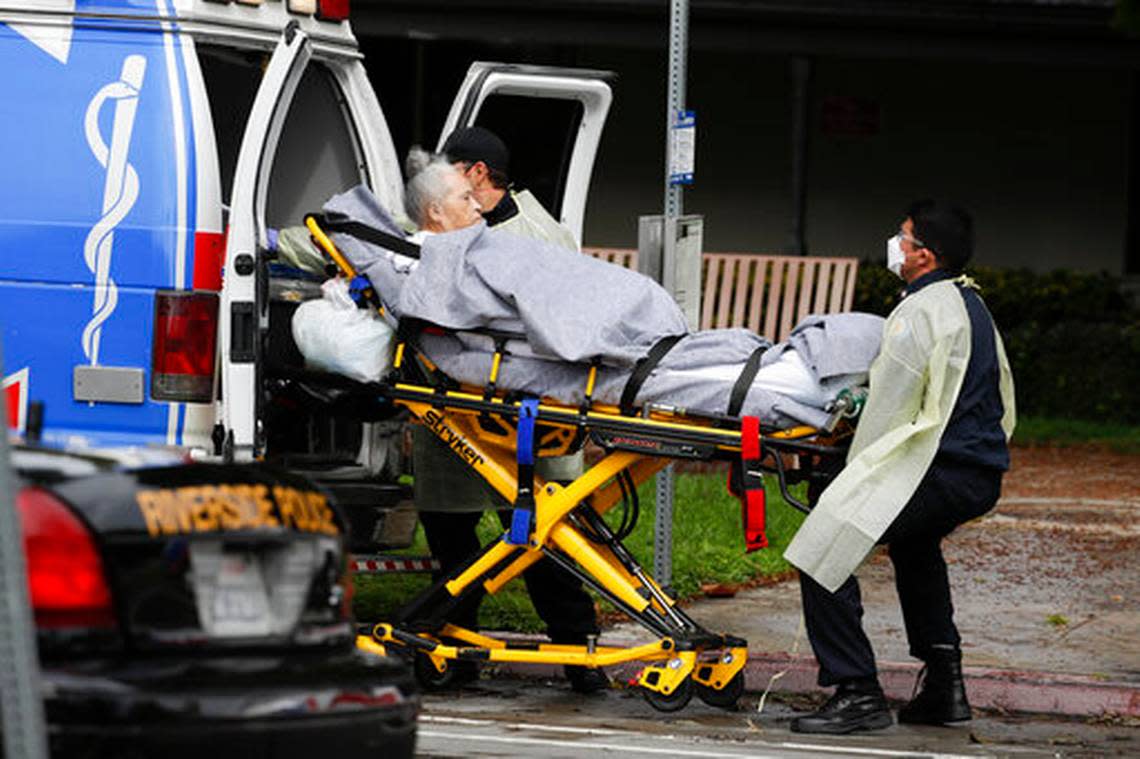