Welcome to the Capital Note, a newsletter (coming soon) about finance and economics. On the (abbreviated — Daniel Tenreiro is away) menu today: ESG, Trader Joe’s COVID challenges, autonomous trucks, Argentine subsidies, and Soviet gold. ESG, Climate Activism, and Shutting Down DebateUnless otherwise specifically stated, the purpose of an investment […]

ESG, Climate Activism, and Shutting Down Debate
Unless otherwise specifically stated, the purpose of an investment company is, I would assume, to (after taking appropriate account of risk and so on) maximize the returns to the clients who have entrusted it with their money, a statement of the obvious that may soon become a statement of the shocking if “socially responsible” investors (their description, not mine) get their way.

Norway is a country that has a long tradition of — how to put this — delivering mixed messages on climate change. The country’s wealth rests on oil, but many of its leading figures seem to find it difficult to resist an opportunity to lecture everyone else about the dangers of a warming planet. Under the circumstances, it came as no great surprise — up to a point — to read in the Financial Times that the Norwegian company Storebrand (described by the FT as $91 billion Nordic asset manager) had unloaded its holdings in ExxonMobil, Chevron, and mining company Rio Tinto.

But the reason that Storebrand gave for taking this step is worth noting. Although much of Storebrand’s objections to these companies undoubtedly rests on the contribution that their industrial activities may make to climate change, there was something else.

The immediate reason for Storebrand’s divestments was, the Financial Times reported, as a “protest over [those companies’] lobbying on climate change issues.”

Storebrand’s move is thought to be the first example of a big investor explicitly divesting from oil producers and miners for alleged lobbying against tougher environmental standards.

“Climate change is one the greatest risks facing humanity and lobbying activities which undermine action to solve this crisis are simply unacceptable. The Exxons and Chevrons of the world are holding us back,” said Jan Erik Saugestad, chief executive of Storebrand.

Deconstruct that sentence a little more and it becomes clear that what Saugestad is saying is that arguing (because that, in essence, is what lobbying is) for a different approach than the one that he favors is “simply unacceptable.” Not for the first time, it is hard not to feel a little uneasy about the attitudes that some climate warriors have towards free speech.

“Investors need to be responsible and proactive in accelerating the green transition. We are not passive actors awaiting the pending systemic harm that climate change will unleash on ecosystems, societies, and economies.”

To repeat myself, I always thought it was up to paid investors to maximize investor return, other of course than in funds where their clients have chosen to invest in ways that take account of climate concerns, but perhaps that’s just old school.

Meanwhile, this new study may be worth a look:

Environmental, social, and governance (“ESG”) scores have been widely touted as indicators of share price resilience during the COVID-19 humanitarian crisis. We undertake extensive analyses to investigate this claim and present robust evidence that, once the firm’s industry affiliation and accounting- and market-based measures of risk have been properly controlled for, ESG scores offer no such positive explanatory power for returns during COVID-19. Specifically, ESG is insignificant in fully specified returns regressions for the first quarter of 2020 COVID crisis period, and it is weakly negatively associated with returns during the market’s “recovery” period in the second quarter of 2020. Industry affiliation, market-based measures of risk, and accounting-based variables that capture the firm’s financial flexibility (liquidity and leverage) and their investments in internally-developed intangible assets together dominate the explanatory power of the COVID returns models.

More on that to come.

The first is that Covid-19 has driven a surge in online grocery shopping, and the company doesn’t sell via the internet. In its weekly podcast, “Inside Trader Joe’s,” the company said it would rather invest in its staff than in digital infrastructure.

Fear of infection has pushed many consumers to embrace one-stop shopping, where they consolidate spending into fewer trips out. This trend favors big-box stores, such as Walmart Inc. and Target Corp., that carry far more household essential items. It’s bad news for any limited-service grocer.

Jon Wertheim: What segment do you think’s gonna be hit first by driverless trucks?

Steve Viscelli: I’ve identified two segments that I think are most at-risk. And that’s — refrigerated and dry van truckload. And those constitute about 200,000 trucking jobs. And then what’s called line haul and they’re somewhere in the neighborhood of 80,000-90,000 jobs there.

If there is one lesson Argentina ought to have learnt over the decades, it is that its subsidy regimes have a way of backfiring.

And so (via Mercopress):

Argentina is extending a price freeze for TV, Internet, and mobile service until the end of the year, deeming them “essential public services.”

The freeze means providers won’t be able to raise prices going forward without government approval, according to a statement sent after-hours Friday. Prices on those items had been frozen since May, with the ban set to expire at the end of the month.

The move marks the government’s latest measure to contain prices amid inflation running at 42% annually and an economic contraction deepened by a nationwide lockdown aimed at curbing the spread of Covid-19. Argentina has already frozen prices on 2,000 consumer goods it also deems essential.

Random Walk
Gresham’s law — that bad money will drive out good — is widely known, but there is an important exception to it that’s worth noting: This law goes into reverse in times of high inflation, when there is a need for a medium of exchange that actually works.

Step forward the chervonets, a gold-backed currency introduced by Russia’s new Communist regime as part of its efforts to restore the economy after the chaos (and hyper-inflation) of the immediate post-revolutionary years. Those efforts were centered around Lenin’s New Economic Policy, which effectively permitted the development of a mixed economy, but the NEP would have struggled without the chervonets.

A website devoted to the great Russian writer Mikhail Bulgakov takes up the story (my emphasis added):

The Soviet Union did not have a stable currency at the end of the civil war, and the government realized that it could not achieve its ambitious economic development plans of the New Economic Policy (NEP) without first solving this pressing monetary problem. In Bulgakov’s diary, we can read that, on April 18, 1922, the rent in Bolshaya Sadovaya was increased to one and a half million roubles. And it was for “a room which is worth nothing, and the neighbours either”. A pound of flour was 18 million roubles, a white bread was 375 thousand per pound, and butter was 1 million 200 thousand per pound. One year later, on July 11, 1923, the white bread reached 14 million per pound. Three months later, on October 18, 1923, it was at 65 million.

A decree of October 11, 1922, issued by the sovnarkom, authorized the Soviet state bank to issue the chervonets bank notes as the equivalent of the prerevolutionary ten roubles gold coin (7.74232 grams of pure gold). This legislation required at least 25 percent of chervontsy (plural) to be backed by precious metals and hard currency . . .

The ratio of the chervontsy to the old rubles, which were not backed by gold at all, was to be two to one . . . No exchange rate was established between the two currencies, by the way, so the chervonets, the gold-backed currency would eventually prevail.

Actually, the chervontsy did drive the old paper money away. Whereas at the beginning of 1923 the chervontsy represented only 3 per cent of all money in circulation, the percentage increased to 83.6 per cent in February 1924, on the eve of the final act of currency reform.

(Gold chervonets coins were also issued, but they were mainly, although not exclusively, used for foreign trade purposes.)

Through the 1920s, the chervonets was officially quoted on foreign exchanges. However, this attempt to maintain a “hard” Soviet currency was controversial almost from its inception and quickly ended along with the NEP itself. On June 9, 1926, the government passed a resolution forbidding the export of Soviet currency abroad, and in February 1930, all transactions [selling] gold and foreign currency to private individuals for chervonets at a fixed rate were banned.

Mon Aug 24 , 2020
Photo credit: COURTESY From Harper’s BAZAAR Online shopping is not what it was six months ago. We are not immune to the realities retail is facing in the midst of a global pandemic and the economic hardship it has wrought. But truth is, many who can are largely still shopping, […] 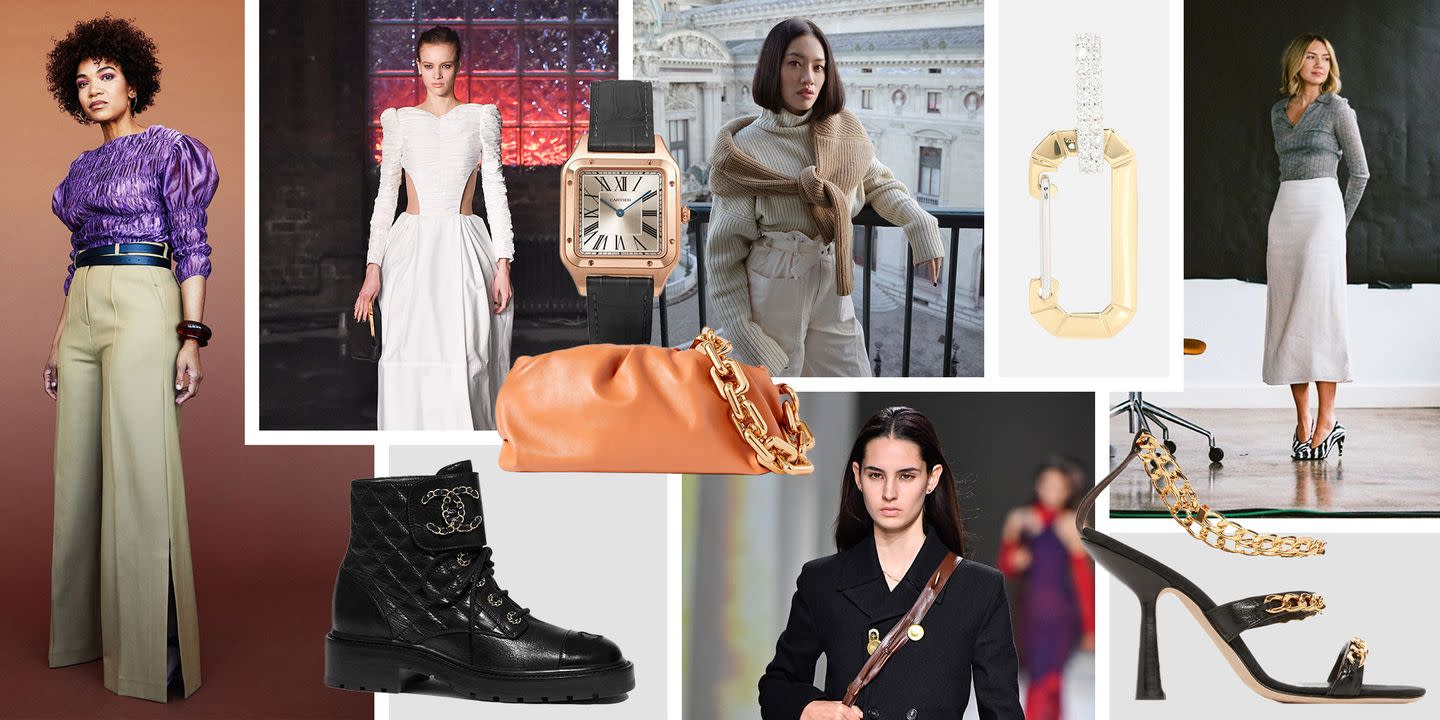