Nathan Howard/Getty For nearly a month, Riot Ribs served barbecue, tacos, jalapeno poppers—whatever they had on hand—from a series of tents near the site of ongoing protests in Portland, Oregon. Then, on Tuesday, the food collective announced an abrupt closure. Someone was impersonating the group and swindling money, members said. […]

For nearly a month, Riot Ribs served barbecue, tacos, jalapeno poppers—whatever they had on hand—from a series of tents near the site of ongoing protests in Portland, Oregon. Then, on Tuesday, the food collective announced an abrupt closure. Someone was impersonating the group and swindling money, members said.

Riot Ribs was among an emerging network of mutual aid groups aimed at distributing free food to protesters and the homeless in Portland and Seattle, where rage over the police killing of George Floyd, racism, and U.S. law-enforcement has resulted in months of marches.

But Riot Ribs’ sudden dissolution—the result of a former member allegedly going rogue—highlighted the challenges of the mission. Beset by local police, federal authorities, right-wing trolls, and friendlies-turned-grifters, the Pacific Northwest’s protest food groups have spent the past month struggling to do what should be one of the least controversial jobs there is: handing out free food.

Launched on July 4, Riot Ribs was the latest in a series of food groups to pop up around racial justice protests. Some, like Seattle’s Riot Kitchen, began operations even earlier. The latter started as an initiative to feed the homeless and protesters around the temporarily police-free Capitol Hill Organized Protests (CHOP, previously CHAZ), but has outlasted the short-lived autonomous zone and continues dishing out meals to demonstrators.

Maehem, Riot Kitchen’s founder (who, like many people interviewed for this article, requested anonymity amid police scrutiny of activists nationwide), said the project emerged in the first days of the George Floyd protests. That’s when she and friends marched for hours without eating and—after learning that other activists were also marching on empty stomachs—the former chef started a fund to make and distribute free sandwiches.

“So many people wanted to donate to my sandwich fund that I decided to turn it into a kitchen project. I was a sous chef, so I had the skills and resources to get hot meals to people,” Maehem told The Daily Beast. When the CHOP started, “people were choosing to sleep outside, so I thought the least I could do was cook them some breakfast.”

Riot Ribs launched with a similar mission, opening up with a single grill. Its sole operator, an original Black Panther, was tear-gassed by police while he cooked the first night, the group told Bon Appetit.

Tear gas would become an all-too-common feature of Portland protests, as federal agents waged nightly confrontations with protesters in a crackdown ostensibly aimed at protecting federal buildings that was best known for throwing people into unmarked vans.

But Riot Ribs appeared to be a particular focus of law enforcement ire. Unlike Riot Kitchen and another Portland group called Resistance Assistance—which currently assemble food off-site and bring it to protests—Riot Ribs was a full-time encampment. On July 16, the collective tweeted that members had been arrested by police who declared the park where they camped to be “under renovation.” Police hauled away their growing operation, which had expanded to include multiple grills, coolers, and donated money.

“Everyone needs to know that they’re targeting us. They slashed our cases of water bottles; broke one tent only (one of our cooks); broke open our snacks and sprayed them with tear gas as well,” the group tweeted. “All of our grills were purposely pepper sprayed on the inside last night. We need new grills.”

A member of The Witches, a Portland group that distributes food and first aid, said their tent and nearby tents used by unhoused people were deliberately destroyed one night.

“Some sort of blade was taken to them, slashed them beyond repair, and chemicals were poured on sleeping bags,” R, a Witches member who declined to provide their name, told The Daily Beast. “There’s no nice way to say it, but it’s definitely fed troops.” But, they added, “even before that, we had carts full of snacks and water taken by the Portland Police Bureau.”

The Witches tweeted a picture of what they said was a supply tent trashed by federal agents.

The Portland Police Bureau and the Departments of Justice and Homeland Security did not immediately respond to requests for comment.

But some antagonism came from far-right civilians.

“We’ve had white supremacists follow us home,” R said of The Witches. And on social media, right-wingers repeatedly accused Riot Ribs of terrorism, with some threatening to call the health department on the group. Multiple fraudulent accounts posed as them online—in one case observed by The Daily Beast, imposters used a fake Riot Ribs account to post the home address of a Portland journalist currently being targeted by the right. Riot Kitchen and Portland Resistance Assistance members likewise said they had experienced some degree of harassment online.

“I think that the rage is largely directed at the protest movement, itself, rather than free food, but the loathing of communism is certainly at the core of both,” Reid Ross told The Daily Beast.

Lefty food collectives are a longtime lightning rod for controversy, Reid Ross noted, pointing to Food Not Bombs, a 40-year-old mutual aid group. The group, which served free food at protests as well as to the homeless, has been subject to decades of crackdowns. Its co-founder recently told Teen Vogue that he’d been arrested nearly 100 times in incidents connected to Food Not Bombs. In a move that foreshadowed President Donald Trump’s rage at supposed anarchists in Portland, the FBI investigated some Food Not Bombs members for their connection to the anarchist prison-support group Anarchist Black Cross in 2004.

“If you look at past examples like Food Not Bombs, which serves free food to anyone who wants it at public places like parks around the world, they’ve often been targeted by police, and to a lesser extent, right wingers, for contributing to a kind of social disruption,” Reid Ross said.

The problems multiplied in late July, when a Riot Ribs volunteer went rogue, the collective alleges. Riot Ribs hasn’t named the man (many participants in the ongoing protests do not believe in calling police), but accuse him of “verbally, physically, and/or sexually abusing other volunteers.”

The alleged embezzlement came at a sensitive moment for Riot Ribs. The collective had kept meticulous open logs of its income and expenses since July 7. With growing publicity, donations skyrocketed, surpassing $300,000. By July 24, Riot Ribs announced it was suspending donations, since it had received more than it could possibly use. (The group tweeted an urgent call for a business lawyer that day.)

But the rogue volunteer allegedly set up social media accounts and online tip jars under Riot Ribs’ name, funneling all new donations to himself. “This individual began to try to ‘run’ Riot Ribs and set up an alternate CashApp and Twitter handle to continue operations in the park,” the group said in a statement. To make matters worse, the right-wingers who had plagued Riot Ribs’ Twitter mentions began promoting the imposter account, which has since changed its name.

Riot Ribs said they abandoned their tents—and a plan to transfer ownership to the nonprofit Don’t Shoot PDX—due to the rogue’s presence.

“We were violently assaulted as this individual forcibly removed everyone originally involved out of the park,” Riot Ribs said in its statement of dissolution. “For that reason, all original members of Riot Ribs are no longer in the park and do not feel safe continuing to feed people in Portland.”

The group has since pivoted to a pair of food vans, called Revolution Ribs, and distributed some of its funds to other mutual aid groups in the Pacific Northwest, $25,000 of which went to Seattle’s Riot Kitchen. Some of those groups indicated a desire to take their food projects on the road, too. Maehem, of Riot Kitchen, said she was thinking of buying a bus to caravan behind her food truck, in order to feed activists outside the city.

Riot Ribs’ dissolution also came amid an announcement—and some early evidence—that federal agents would withdraw from Portland, although details remained murky as Trump and Acting Homeland Security Deputy Chad Wolf suggested otherwise. As the city prepares for the next phase in protests—activists have made clear that they will not leave the streets even if the feds have—some of Riot Ribs’ staff are taking the food project mobile in their new vans.

Others “are still in Portland and will eventually go back into mutual aid and direct action,” the group said in a statement, and “some of us will be taking a very long, much needed break.”

Mon Aug 3 , 2020
LONDON (AP) — Europe’s biggest bank, HSBC, said Monday that its net profit plummeted 96% in the second quarter of this year as lower interest rates combined with the downturn due to the coronavirus pandemic tool hold. The bank’s net profit was $192 million in the April-June quarter, down from […] 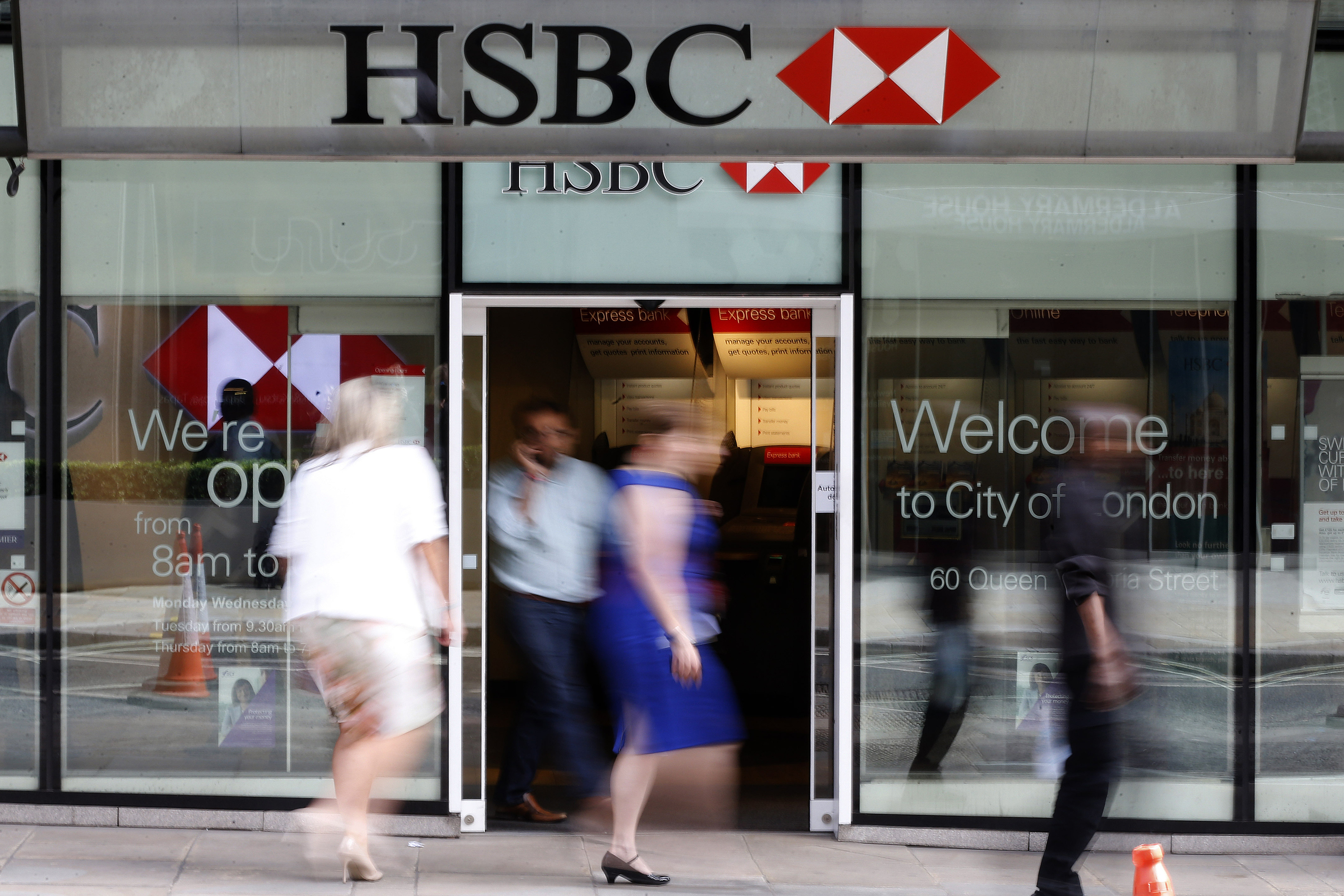