The contrast with the prior recession is striking — compared with the 157 banks that failed in 2010, just four have gone under so far in 2020. Like other businesses, banks didn’t have a COVID-19 playbook to open up when the pandemic broke out this year. But despite some rough […]

Like other businesses, banks didn’t have a COVID-19 playbook to open up when the pandemic broke out this year. But despite some rough going earlier, most institutions have fared reasonably well, which is good news for banks and depositors, too.

The contrast with the prior recession is striking — compared with the 157 banks that failed in 2010, for example, just four have gone under so far in 2020, the Federal Deposit Insurance Corp. reported.

And while the FDIC cited 884 “problem” banks a decade ago, that number currently stands at 56. The agency doesn’t name which institutions have raised alarms.

The FDIC’s insurance fund, which backs depositor losses in case of bank failures, has more money in it than in past years, though it’s not quite up to where it should be. That’s partly the result of a flood of deposits that flowed in earlier this year when Americans received federal stimulus checks. (Assessments paid by banks to support the insurance fund haven’t yet kept pace.)

There’s even evidence that more Americans are tied into the banking system through checking and savings accounts — a factor that could lead to improved personal financial results for many Americans. Digital services have helped in this regard.

Some clouds on horizon

Banks aren’t out of the woods yet. During the last downturn, bank financial pressures lingered for a few years after the recession officially ended, as it took a while for bad loans to wind down. Loans also remain a concern today, and banks aren’t earning as big of an interest-rate spread as they normally do.

“The low-interest-rate environment, credit quality deterioration and declining loan growth continue to challenge the industry,” cautioned Diane Ellis, a FDIC division director in a commentary on the latest quarterly results.

The year didn’t start out well. Bank industry profits plunged over the first two quarters of 2020, partly from COVID-19 pressures and partly from a new regulation that requires banks to recognize possible problem loans earlier. When boosting provisions for losses, banks incur expenses that eat into profits.

There’s another major drag in the form of exceptionally low interest rates, which make it harder for banks to earn a positive spread between what they pay to depositors and earn on loans. This “net interest margin” compressed to 2.68% in the third quarter, a record low.

TRY THIS: As 2020 comes to an end, consider these tax and investment tips

But loan customers so far haven’t shown too much distress overall, despite higher unemployment and problems for business customers in sectors including hotels, restaurants and commercial real estate.

One notable and surprising bright spot is the housing market, which has boomed unlike in the last recession, fueled by low interest rates.

With worries over the economy abating somewhat, banks lately have put less money toward loan-loss provisions, which largely explained a jump in industry profits to $51.2 billion in the third quarter from $18.8 billion in the second. About 95% of banks are currently profitable.

Credit unions, unlike banks, are not-for-profit associations owned by their members and thus don’t face the same profit pressures. But here, too, the trend is favorable with just one failure so far this year, reports the National Credit Union Administration, which insures these institutions as the FDIC insures bank deposits. That’s down from 28 failures in both 2009 and in 2010.

ASU FORECAST: Arizona, U.S. could be back near economic normal in 2021

Throughout the year, bank and credit union depositors haven’t had to worry much about the safety of their money. The FDIC fund for banks counts $116 billion to safeguard depositors in case of failures, equal to 1.30% of insured deposits.

However, that ratio is slightly below the 1.35% level where it’s supposed to be, which the FDIC attributed to the surge of deposits that came in during the first two quarters when the economy stumbled and more people suddenly had stimulus money in their accounts. Deposit flows in the third quarter came in at a more normal pace.

Bank failures typically don’t result in losses for depositors anyway. In most cases, the bank that steps in to take over the failed institution, under FDIC oversight, usually assumes any obligations. Customers are protected, at a minimum, up to $250,000 in deposits per institution. The four bank failures so far in 2020 were spread out geographically, with one each in Florida, Kansas, Nebraska and West Virginia.

While failures aren’t a concern, ultralow yields are a problem for depositors. Bank money-market accounts paid about $4,700 in interest on average in 2007 on a typical $100,000 deposit, according to Bankrate.com. Today, the same deposit yields a bit above $200.

SPECIAL RETIREMENT PLAN RULES OF 2020: What you need to know as year comes to end

Compared to past years, more people are tied into the banking system today. In an October study, the FDIC reported a record high 95% of households had at least one bank or credit union connection, such as a savings or checking account (the figure was slightly better, above 96%, in metro Phoenix).

Experts who track income inequality cite bank connections as a key factor that can improve consumer finances. Checking and savings accounts provide safety for funds and access to mortgages and other bank products, with less costly bill payment services and other benefits.

The study, based on 33,000 consumer respondents, was conducted in 2019. The proportion of unbanked households probably has risen this year owing to coronavirus business shutdowns and layoffs, the FDIC said.

Among consumers who still don’t have accounts, a lack of money and a distrust of banks were the two top reasons cited. Compared to the 3% of white households without any checking or savings accounts, 14% of Black households remain unbanked, as do 12% of Latino households.

The increase in households with bank connections was helped by a rise in the number of people who use mobile banking, the FDIC said. Compared to most other businesses, banks were well-positioned to deal with customers remotely after COVID-19 closed branches, as they had made extensive technology investments in prior years.

Banks with superior online and mobile services have earned high marks for satisfaction “in a year when mobile apps and websites have become a vital lifeline for banking customers,” said Paul McAdam, a senior director at researcher J.D. Power, which recently released a customer-satisfaction study.

Capital One ranked highest of the eight megabanks examined in the study, with Chase second and PNC third. J.D. Power received feedback from roughly 8,900 bank customers in August and September.

McAdam said it was noteworthy that Capital One earned top marks in the consumer-satisfaction study despite having cut the number of its branches by nearly half over the past five years. Fewer customers visit branches anymore — a trend that began well before the coronavirus outbreak.

This article originally appeared on Arizona Republic: How banks, depositors have fared during a rough economic year

States Head Into The 2021 Legislative Session During Pandemic : NPR

Tue Dec 22 , 2020
Colorado state Rep. Julie McCluskie, a Democrat, is surrounded by protective plastic barriers in the House chambers at the Colorado State Capitol during an emergency legislative session on November 30. Lawmakers there are planning to move their 2021 session back by at least a month. Helen H. Richardson/Denver Post via […] 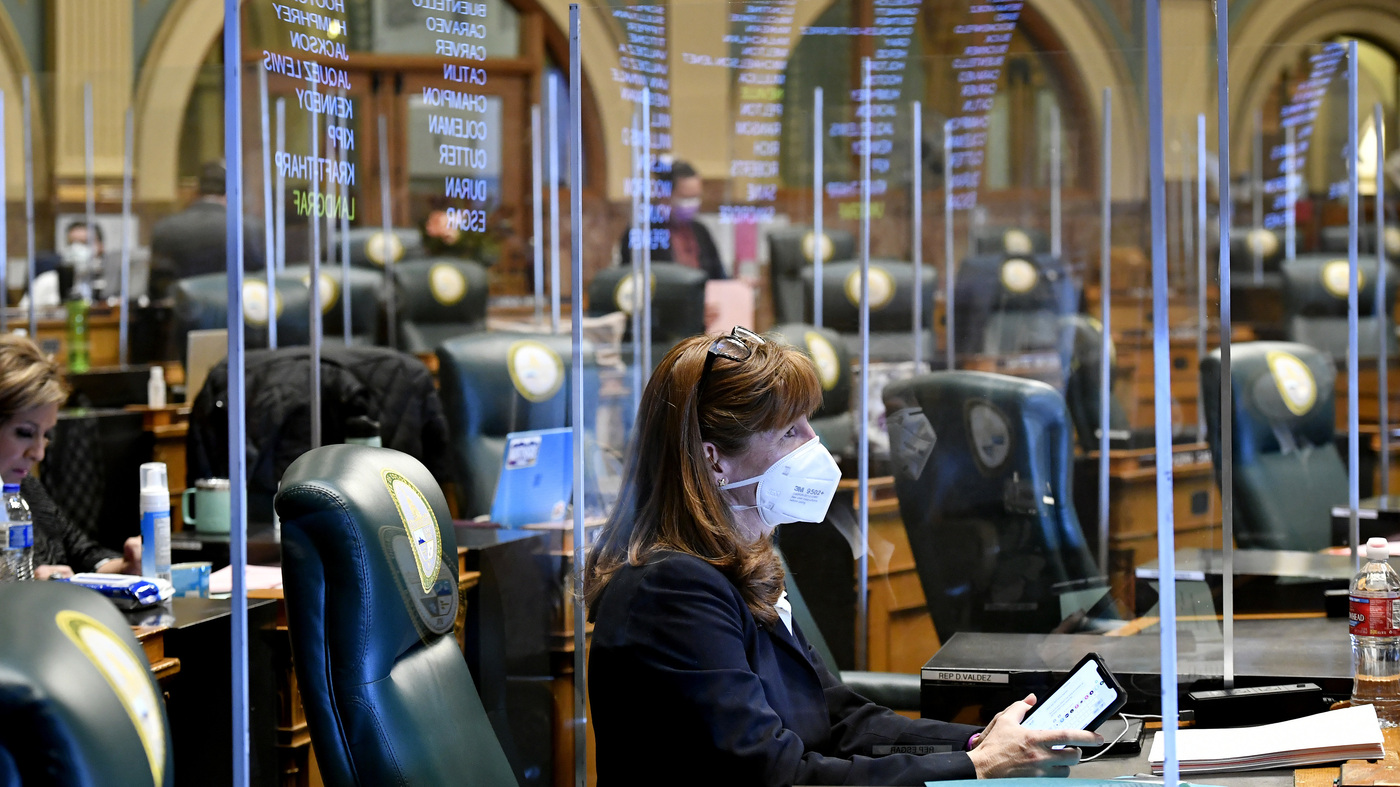