People gather at the Supreme Court on the morning after the death of Justice Ruth Bader Ginsburg, 87, Saturday, Sept. 19, 2020 in Washington. Credit – J. Scott Applewhite–AP

Lauren Acker stands near the Supreme Court on a crisp September night as thousands of people gather around in tribute to Justice Ruth Bader Ginsburg. The perimeter of the Supreme Court lawn is starting to fill up with flowers and signs left by the people who streamed to the vigil the evening after Ginsburg’s death.

“It seems bizarre that the loss of one figure has kind of been the trigger for a lot of people to start freaking out,” says Acker, a 29-year-old resident of Washington, DC, and a Democrat. “It’s like the emergency light, right? This is it. … Anybody who believes that what we’re currently working with is not a functioning system of government, it is now, as it always has been, our responsibility to yell louder, fight harder, and educate everyone we can.”

Democrats across the country collectively panicked on Friday night when the news broke that Ginsburg, a beloved feminist and liberal icon, had died from complications related to metastatic pancreatic cancer. Their grief was intertwined with a harsh political reality: For Democrats, Ginsburg’s place on the court was part of an institutional safety net, and it is now tethered to a high-stakes election for which voting is already underway. Her death could tip the balance of the court further toward conservatives, an opportunity for the right that would have long-term ramifications.

Shortly after news of her death broke, Senate Majority Leader Mitch McConnell vowed to give President Donald Trump’s nominee a floor vote, and Trump has said he expects his nominee to be announced in the coming week. It’s unclear whether McConnell will have the votes he needs in the Senate to confirm a candidate in the final weeks ahead of the election. Already, two Republican Senators have announced that they think the Senate should wait to vote on a nominee until after the election.

Make sense of what matters in Washington. Sign up for the daily D.C. Brief newsletter.

Democrats lashed out at the hypocrisy of Republicans for seeking to confirm a new justice so soon before the election, after Senate Republicans refused to move on then President Barack Obama’s nominee to the court in March 2016. Back then, Republicans argued it was too close to the election and said the electorate should have a voice in the matter. But Democrats are also bullish about the situation, hoping that the inevitable fight over a Supreme Court vacancy will help the party bring out the vote. (Republicans also see this as a potential way to fire up their base.)

While Democrats were already mobilized against Trump, Ginsburg’s death has once again reset the board. Now it’s not just a second term for Trump on the line; it’s a Supreme Court vacancy that could shape the direction of the country for years, and start by blocking the next Democratic president’s agenda. “Our game plan remains the same. And our game plan is: we take nothing for granted,” Tom Perez, chair of the Democratic National Committee, tells TIME. “This is yet another reminder to our already motivated voters that the stakes couldn’t be higher.”

Senate races grew more competitive overnight as it became clear that for the third time in just a handful of years there will be a confirmation battle on Capitol Hill. Prior to Ginsburg’s death, the forecast of who would have control of the Senate was looking promising for Democrats. About a dozen Senate races were expected to be competitive, and now Democrats’ sense of urgency about them has grown as they recognize that in order to have leverage, they have to make gains in the November election.

Democrats have already seen a surge in online fundraising in response to Ginsburg’s death. ActBlue, a Democratic fundraising platform, announced that between 8 p.m. EST on Friday and the end of Saturday, it received 1.5 million contributions that amounted to $91.4 million for Democratic candidates and initiatives. The donations broke ActBlue’s records for money raised in a day, money raised in an hour, the number of contributions made in a day, and the number of contributions made in an hour.

Vote Save America, a self-described “one stop shop to get out the vote” for Democrats run by Crooked Media, announced that its Get Mitch or Die Trying page, which is currently splitting donations among 13 competitive Senate races, had raised more than $19 million as of Sunday. On Saturday, Tommy Vietor, a former Obama administration official now known for the Democratic podcast Pod Save America, tweeted a graph showing donations to the fund since it was created; the line takes a sharp turn and goes straight up after news of Ginsburg’s death.

This is evidence, Democrats say, that the conventional wisdom that Democratic voters are not as motivated by the judicial branch as Republicans is wrong. Trump himself has said his promise to nominate a conservative Supreme Court justice was a major factor in the 2016 election, and earlier this month, he released a list of potential nominees in hopes of inspiring voters again.

“There already is .. just this outpouring of emotion and activism,” says Christopher Kang, co-founder and chief counsel to Demand Justice, a progressive advocacy group. “I think you’re going to see that this is going to be a huge political liability for Republicans.”

Among the most closely watched Senate races are Maine and Colorado, seats currently held by Republican Senators Susan Collins and Cory Gardner, respectively. They are seen as two of the likeliest pickups for Democrats. Polling shows Collins has been weighed down by her vote to confirm Justice Brett Kavanaugh, who was credibly accused of sexually assaulting a woman in the 1980s during his confirmation process in 2018.

In a September New York Times poll of likely voters in Maine, 55% said they disapproved of Collins’ vote to confirm Kavanaugh. On Saturday, Collins put out a statement saying that while she wouldn’t object to Trump making a nomination or to the Senate beginning the vetting process, she did not believe the Senate should vote on the nominee prior to the election.

In Colorado, Democrats have gone after Gardner, arguing that he needs to hold himself to the same standard he set in 2016 after Justice Antonin Scalia died in February, when he — like many other Republicans — said that the next president should get to nominate the next justice after the November election.

“The voters that both campaigns are vying after right now, they’re not the Trump base. They’re women, and these women are not going to be mobilized by Mitch McConnell’s power grabs or any further assault against our rights,” says Rachel O’Leary Carmona, executive director of the Women’s March, a Democratic organizing group.

The sudden Supreme Court vacancy has also taken over the narrative in other close races. In North Carolina, Republican Senator Thom Tillis, who is locked in a tight race with Cal Cunningham, put out a statement tying himself to a Trump nominee and Cunningham to a Biden nominee. “There is a clear choice on the future of the Supreme Court between the well-qualified and conservative jurist President Trump will nominate and I will support, and the liberal activist Joe Biden will nominate and Cal Cunningham will support, who will legislate radical, left-wing policies from the bench.”

In Iowa, Iowa Starting Line, a left-leaning online news outlet, reported that Republican Senator Joni Ernst immediately began fundraising in response to Ginsburg’s passing, including sending out text messages that asked donors to “help hold the line.” In Arizona, where former astronaut Mark Kelly is running as the Democratic nominee against Republican Senator Martha McSally, local organizers were having to add more phone banking shifts because of the added energy, says Leah Greenberg, co-executive director of the Indivisible Project, a progressive organizing group.

Adding to Democrats’ confidence is that in some of these swing states, including Arizona, Maine, and Colorado, polling shows Biden leading Trump, which they believe bodes well for their Senate candidates. At the very least, analysts say, Republican Senate candidates will have to appeal to Biden voters to win. “Anyone who is in the Senate who is trying to appeal to cross-partisan voters is going to see this as a detriment to them because it’s really going to make them have to sort of take a stance on an issue that is strongly partisan,” says Sean McElwee, a progressive data strategist.

As Trump and McConnell pushed for a quick nomination and Senate vote after Ginsburg’s death, the long-simmering discussion around expanding the number of justices on the Supreme Court also appears to have gained traction on the left. It would require Democrats taking control of the Senate and the White House in order to pass the legislation, but notably it has gotten a fair amount of discussion among prominent political figures and groups, among them former Democratic presidential candidates and sitting elected officials.

Biden himself has not backed the notion, but the Democratic party’s national platform “recognizes the need for structural court reforms to increase transparency and accountability.” And on a call with Senate Democrats, Senate Minority Leader Chuck Schumer reportedly told the caucus that if Republicans move forward with a nominee, “nothing is off the table.”

For years, Democrats have felt the Supreme Court’s majority was stolen from them, first after Senate Republicans refused to allow a hearing on Obama’s nominee to replace Scalia, Merrick Garland, and instead held off until Trump took office to nominate Neil Gorsuch. In 2018, the chamber then pushed Kavanaugh through despite the accusations against him to replace a retiring justice.

Now Democrats are aware most Republicans will not want to hold back when they have an opportunity to make such a lasting impression on the highest court in the land.

“It’s rare for a procedural democracy issue to be front and center in a national campaign, but as people realize that everything they care about, everything they care about, depends on reforming the courts, that’s why the conversation continues to accelerate,” says Aaron Belkin, director of Take Back the Court, a left-leaning advocacy group. “There’s a realization among Democrats, and among people who realize that we’re in a deep hole, that the next administration is going to be in handcuffs from day one because of the stolen courts.”

Mon Sep 21 , 2020
For the first time this election, Joe Biden is sitting on the biggest pile of cash — and he’s vastly outspending President Donald Trump, too. Biden is entering the final stretch of the general election with $141 million more in the bank than Trump, a stunning reversal of fortunes from […] 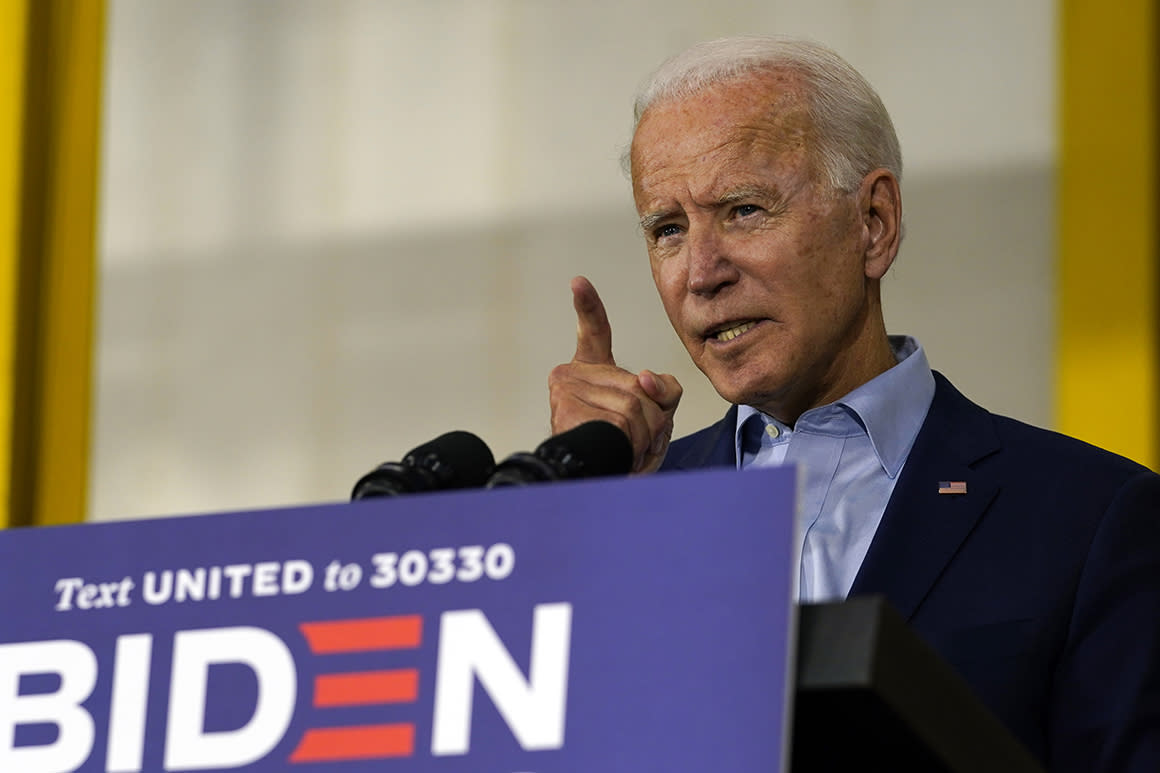